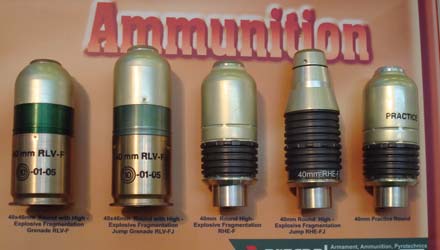 Various types of 40mm ammunition offered by Arsenal of Bulgaria.

Milkor South Africa
Milkor, most famously known for their 40mm Mk 1 multiple grenade launchers introduced a 40mm break action, single shot pistol for use with crowd control and less-lethal 40mm rounds.  Developed from an existing Milkor-designed 37mm pistol, and equipped with a 130mm (5.1 inch) smooth bore barrel, the pistol is double-action only.  Given the short barrel length, the effective range of the pistol is only 100 meters, but given the intended use as a riot control weapon, an extended range is not required.  In terms of safety, high explosive 40mm rounds may be fired from the pistol, however the lack of barrel rifling will result in an HE round failing to arm.  Why build a 40mm pistol?  Representatives from Milkor indicated that in a riot control situation, the user would have the ability to fire less-lethal ammunition and holster the pistol.  In this manner, the 40mm pistol would be less cumbersome that a larger rifle sized weapon of equal caliber.  It is unknown as of press time whether Milkor-USA will offer the 40mm pistol to U.S. customers.  Additional information may be found at the Milkor website, www.milkor.net.

Developments in 20mm rifles
Multiple man-portable 20mm anti-material rifles were present, with two worthy of note.  First, Truvelo Manufacturing of South Africa introduced a 20mm x 110 (20mm Hispano-Suiza) caliber bolt action rifle.  Known most notably as the manufacturer of the Neostad shotgun, Truvelo claims its rifle is accurate to within 2.5 minutes-of-angle, allowing users to hit a 15-inch radius target at 600 yards.  Reportedly weighing in at 55 pounds, the rifle has a retail price of $36,000.

Similarly, the Republic of Croatia also introduced a partially recoilless 20mm x 110 caliber bolt action rifle.  Weighing 17 kg (37.5 pounds) the rifle utilizes a gas port to vent and direct propellant gases to the rear of the shooter.  Overall length totals 133 cm, (52 inches) and has a claimed maximum range of 2 km (1.24 miles).  Additional information on this rifle was not available as of press time.

Tsniitochmash Central Institute of Precision Machinery
Tsniitochmash of Russia displayed a modified Russian PKM machine gun, re-named the Pecheneg Light Machine Gun.  Like its PKM predecessor, the Pecheneg is chambered in 7.62x54R, but boasts a re-designed barrel equipped with cooling fins.  According to Tsniitochmash representatives, the newly designed cooling fins are highly efficient, greatly increasing the number of rounds that can be fired, and eliminating the need for a spare barrel.  The Pecheneg weighs 17 pounds empty, and is capable of firing 600 rounds per minute, and has an effective range of 1,500 meters.

Tsniitochmash also displayed the famed Russian SPP-1M underwater pistol and APS underwater assault rifle.  Representatives explained that both models were again in production, and available for worldwide sale.  Additional information can be found at www.Tsniitochmash.ru

Vinghog Simrad Optronics Group
Known for their light-weight weapon mounts, Vinghog AS of Norway demonstrated the IS2000, an integrated programmable range finder, ballistic computer, and weapon sight in a single package.  Intended for 40mm AGL and .50 caliber weapon platforms, the weapon sight allows users to effectively compute distance to target, while automatically adjusting the aiming point for range, elevation, and lead angle correction.  The system is night-vision compatible, with either 1-power or 3.5-power magnification.  At 3.5 power magnification, the system provides an eleven-degree field of view.  Datum for multiple types of ammunition is provided within the system, providing accurate aiming points for nearly any type of ammunition that may be encountered. 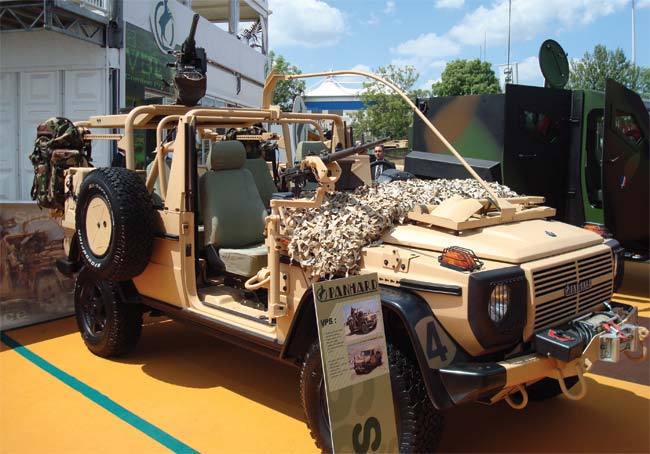 Demonstration of the unit confirmed the robust and accurate nature of the system.  Mounted on an Mk-19 40mm automatic grenade launcher, the system effectively provided the range to a steel silhouette target placed approximately 350 meters from the firing line.  With point of aim automatically adjusted within the sight, the aiming point was placed center of target, resulting in a first round hit on the silhouette.  Recognizing that the Mk-19 is usually intended as an area target weapon, the Vinghog sight allowed for effective use of the Mk-19 in a point target application.  Additional information may be found online at www.vinghog.com.

Pakistan Ordnance Factory
Pakistan Ordnance Factory (more commonly known in the U.S. as “POF”) introduced two new rifles for international sale.  Each rifle appears to utilize a Heckler and Koch Model 91 type receiver, with magazines modified for each the appropriate caliber in each application.  Both rifles claim parts commonality with the Heckler and Koch MP-5 and G-3 rifles.

The PK-7, chambered in 7.62 x 39 is a near copy of an early Heckler and Koch model 52.  Equipped with a 10.5-inch barrel, the weapon utilizes a thirty-round curved magazine, with outward appearances to a Kalashnikov-based magazine.  Both rifle and magazine appeared to be robust, with a claimed loaded weight 8 pounds.  The PK-7 utilizes a 30-round magazine, and has a 700 – 800 round per minute claimed rate of fire. 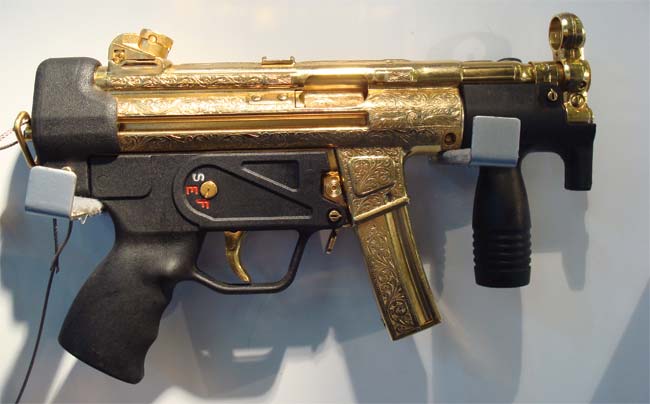 The PK-8 rifle is chambered in 5.56×45 NATO (.223 Remington), with a 700 round per minute claimed rate of fire.  Unlike the Heckler and Koch Model 93 rifle, the PK-8 presents a novel approach to converting an existing G-3 type receiver to fire the smaller 5.56 round.  From outward appearances, the PK-8 is very similar to the Heckler and Koch Model 93, complete with two push pin for disassembly.  Upon closer examination, the PK-8 magazine is a unique magazine to the weapon system, utilizing a hybrid design of the G-3 upper magazine contour and the HK-93 lower magazine contour.  Typical HK-93 magazines will not lock into place on the PK-8, while typical G-3 magazines will not reliably feed 5.56 rounds.  While novel in approach, the new design is not a quick change caliber conversion.  Rather, the PK-8 appears to allow the manufacture of a 5.56 rifle while utilizing existing tooling intended for the manufacture of the G-3 rifle.

Representatives from POF expressed an interest in exporting a semiautomatic version of both rifles to the United States, however at the time of the interview no U.S. imports were scheduled or planned.

Eurosatory 2008 was a great success, and offered a glimpse into the international arms market.  Hosted on a biennial basis, the next show is scheduled for June 14 – 18, 2010, in Paris, France.  Additional information regarding the show can be found at www.eurosatory.com.