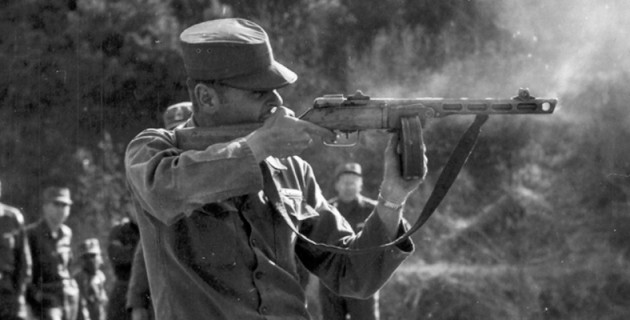 In 1939, just a month after the joint German-Soviet invasion of Poland in September, the Soviet Red Army invaded Finland.  The primary reason used for the 30 November 1939 attack was to reclaim territory lost during the Russian Civil War of 1917.  Soviet leaders wanted to extend their borders primarily as a buffer zone to protect the city of Leningrad from a foreign invasion.

The Red Army leaders were quite confident that they could easily overcome any resistance from the Finnish army, which they outnumbered more than three to one.  The Soviets also had substantially more artillery, tanks and aircraft.  What the Soviets didn’t count on was the heavily forested terrain and narrow unpaved roads, which provided a perfect environment for the Finn’s guerilla tactics.  Armed with submachine guns, the Finnish Army put up a fierce resistance by continually ambushing the Soviet forces and then melting into the forest.  The Soviets eventually prevailed in March of 1940 and hostilities ended.  But the Soviets suffered far heavier losses than anticipated and settled for far less than a total victory, but lessons were learned. Along with the tactics of the Finns, one of the weapons instrumental in keeping the invading Soviet Army at bay was the 9mm Suomi KP-31 (konepistooli) submachine gun.  The KP-31’s fast cyclic rate, and large capacity drum magazine, was responsible for inflicting many casualties on the Soviets.  The Soviets were obviously impressed as they soon began fielding their own submachine guns and drum magazines that were suspiciously similar to the Finn’s.

The Soviets had taken note of the German’s limited use of a rapid firing pistol caliber MP18 submachine gun fielded near the end of World War I, and began development of a domestic design as early as 1926.  However, weapon development had a low priority in the post First War years.

A large cache of weapons captured from the Chinese by the Cavalry Regiment, Capital Division, Republic of Korea Army, 22 October 1951. Note the large number of PPSh 41 type weapons, all with drum magazines. At the end of the row are several PPS-43 type submachine guns. (NARA)

The 7.62x25mm PPD Submachine Gun
Soviet designer Vasiliy Degtyarev had introduced several promising weapon designs by 1931.  Development continued until 1934 when his 7.62x25mm M1934 Degtyarev submachine gun, the PPD (Pistolet-Pulemyot Degtyarev), was adopted for arming senior officers, but production of the PPD was very limited.  Degtyarev continued his work and introduced an improved model, the M1934/38 PPD that used a 25-round box or 73-round drum magazine.  The drum magazine had an extension on it to fit up through the stock.  However, in 1939 a decision was made by the People’s Commissariat for Defense to stop production and withdraw existing submachine guns from service.  They determined the submachine gun would have a limited range, waste ammunition and had little military value – ironically an opinion shared by the U.S. and Great Britain at the time.  The Soviet leaders changed their minds during the disastrous “Winter War” with Finland.  On 6 January 1940 the Commissariat for Defense ordered that large numbers of submachine guns be issued to the army.

Vasiliy Degtyarev continued efforts to improve his PPD design that resulted in the adoption of the PPD 40.  The PPD 40 used a drum magazine, which differed from that of the PPD 34/38 model, by having only feed lips at the top in place of a magazine extension mounted on the top.  This design improved feeding as the PPD 40 was designed only for drum magazines.  The PPD 40 was produced from 1940 to 1941, with approximately 87,000 being built.  The PPD submachine guns were manufactured before the widespread use of metal stampings and had many forged, machined parts that required a lot of tooling and skilled labor to produce. A rare photo of an early PPSh 41 submachine gun with a tangent rear sight. Note that the detachable front sight hood is intact. (NARA)

The 7.62x25mm PPSh 41
The PPSh 41 submachine gun, and the pressed metal technology to produce it, was conceived by Soviet designer Georgiy Shpagin.  Shpagin was a former Russian army ordnance man who after his discharge began to work at the Kovrov Ordnance factory; the same facility where the PPD submachine guns were ultimately manufactured.  During August of 1940, Shpagin’s first prototype submachine gun was tested.  The weapon proved to be reliable under all conditions and its pressed steel, riveted and welded construction required few skilled workers or specialized machine tools to produce.  The PPSh was adopted in December of 1940 as the M1941 Shpagin submachine gun or Pistolet-Pulemyot Shpagina.  Production began during the fall of 1941.

PPSh 41 production was first organized in a network of factories around the Moscow area, each making parts or subassemblies to be assembled in centralized plants.  Initial production was slow but soon grew exponentially.  There were many companies involved in making PPSh 41 weapons and parts, including a few who had no previous experience with weapon manufacture, these including the Moscow Automotive Factory Zavod imeni Stalin (ZIS).  The ZIS factory symbol was a Cyrillic character that looks like a number 3, which represents the Roman letter Z.  Another PPSh 41 factory was the Scetmach plant in Moscow that marked their receivers with a Cyrillic letter C that translates to the letter S.  Other factories contributing to the production of the PPSh 41 submachine gun were: the Kirov Aviabuilding Plant, the F. Dzerzhinskly Factory, the Korov Plant, the Krasnuj Stamping Plant, the Tbilisi Instrument Factory, and the Tbilisi Train Factory.  However, by October, due to the advancing German army, many of the factories were abandoned and relocated to the Vyatskie Polyany Machine Building Plant.  The designer Shpagin was appointed as the chief designer of the facility, which became one of the primary manufacturers of PPSh submachine guns during the war.  The PPSh drum magazine manufacturing plant, originally located near Moscow was also forced to relocate to the Vyatskie Polyany area.  Many Soviet made PPSh drums and some box magazines will have the Star in a Shield trademark of Vyatskie Polyany plant. An early manufacture Soviet PPSh 41 submachine gun with a tangent rear sight (top). The clip-on type front sight hood is missing. The magazine is an early production box type. (Private collection). Below it is a 1944 dated Soviet PPSh. The rear sight is a simpler two-leaf type with a U-shape notch. One leaf is calibrated for a 100 meter range, the second for 200 meters. The sight leaves are well protected by large side ‘ears.’ The front sight hood is spot welded to the barrel shroud. The receiver pivot pin is the late two-piece style. The top of the magazine well area of the trigger frame now has reinforcing extension tabs that partially envelope the receiver. Note the reinforcing bolt in the wrist of the stock. (National Museum of the Marine Corps)

The PPSh 41 consisted of eighty-seven separate parts, twenty-four of the parts were fabricated from pressed carbon steel, and only five of the components were forgings.  The four-groove chromium-lined barrel was pressed and pinned to the receiver.  The receiver extended out to form a sheet metal barrel shroud with cooling slots.  The end of the shroud formed a compensator to reduce muzzle climb.  The receiver was hinged at the front; at the back of the receiver was a spring-loaded end cap that had an L shaped lug at the bottom that secured it to the trigger frame.  By pushing the end cap forward the lug was disconnected from the trigger frame and the receiver could be lifted upward for maintenance, pivoting on the front hinge.  The bolt had a fixed firing pin and a cocking handle safety that could secure the bolt in an open or closed position.  The submachine gun was capable of both semiautomatic and full-automatic fire, with an automatic cyclic rate of 900+ rounds per minute.  The sliding mode of fire selector is located inside the trigger guard, forward of the trigger.  The full automatic position is forward, semiautomatic to the rear.  The weapon operates from an open bolt. The ejection port is located in the center of the receiver and spent cases are ejected straight up.