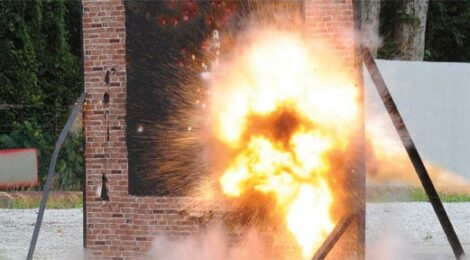 We received an invitation to come to ST Kinetics in Singapore and view their newest small arms offerings.  As quickly as possible, we made the trip, and were given a nice facility tour, then the opportunity to test fire a variety of weapons.  The engineers from each design group came out and gave presentations.  All in all, a most impressive facility, with a great staff and product line.

Singapore Technologies Kinetics, also called ST Kinetics, is a large land systems and specialty vehicle company covering the Southeast Asia region.  It’s a four decade-old company that is a division of ST Engineering.  ST Kinetics has over 20 locations, over 6,000 workers, and is working all over the world in sales – primarily in its vehicle systems.  ST Kinetics’ Small Arms Division has a number of different products of interest to our readers.  The 5.56mm SAR-21 assault rifle, a 40x53mm AGL, as well as the drum fed 5.56mm Ultimax 100, which is now in the Mark V configuration. 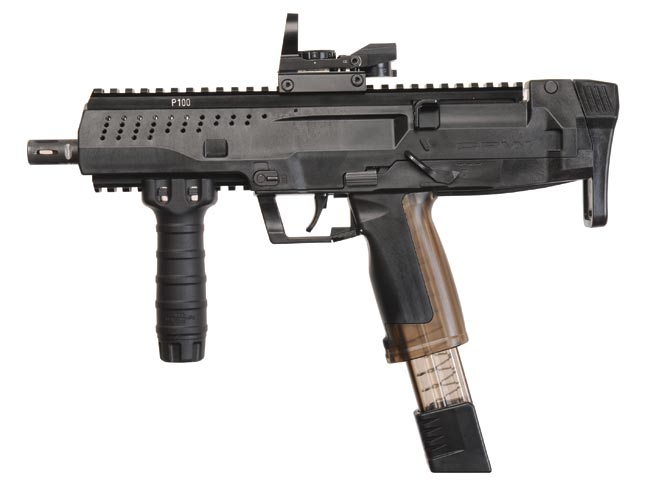 Compact Personal Weapon
One of their newest products is the Compact Personal Weapon. The CPW is a very lightweight 9x19mm machine pistol with a seven-inch barrel that is select-fire with low recoil as well as a very ergonomic design. The engineers chose 9x19mm as a first caliber because the majority of armies and law enforcement agencies around the world today are familiar with and utilize this caliber. One of the features of the CPW is that while it starts in 9mm, it is intended as a multi-caliber weapon. It is a modular design, where the operator can change out the rear translucent grip for a different sized panel and there are plans to convert the CPW to 5.7×28 and 4.6x30mm, leaving the option open for the operator. The rear translucent grip panel also allows for a very fast visual count of how many rounds are left, since the magazines are clear as well. Length of the firearm is 350 mm, 500 mm with the buttstock extended. The retractable stock is a single rail that slides into the Picatinny rail that is on top of the length of the CPW. This single rail can be uncomfortable for some shooters, since it is a thin metal rail that goes against the operator’s cheek. ST Kinetics engineers are now working on a side-folding stock for those who prefer that option. The rear grip has an angle to it that is comfortable and natural for the operator’s wrist. The front rail allows for flashlight, laser, front hand grip or combinations thereof. There are three safeties involved including a standard safety mode selector, and other safety features, such as a long constant trigger pull and a firing pin charged by the trigger to ensure that it’s safe for use or carry. The firing pin safety is a physical block that can’t operate unless parts are properly assembled and properly working, so the firing pin can never go forward inadvertently. At the heart of the system is a cam recoil mitigation mechanism, thus a delayed blowback operation in the CPW. The cam slows the motion of the bolt to the rear and draws out the impulse, so it’s not a straight blowback system. The plastic materials and aluminum utilized in the system make it very lightweight. It can be holstered and handled like a regular pistol, depending on how the operator’s setup is designed. There are two sets of Picatinny rails that are up to Mil-Std 1913 for the mounting of different sights and accessories. The maximum planned effective range is 100 meters. The barrel is 180 mm (7 inches) and has 1/250 millimeter rifling. Weight of the weapon is 1.5 kilograms without accessories. A 30-round magazine is .1 kilogram empty; .5 kilogram fully loaded. Method of fire is semi or fully automatic. Rate of fire is clocked at 900 to 1,100 rpm.

SAR-21 Assault Rifle
The SAR-21 assault rifle is a bullpup configuration rifle, utilizing a built-in optical scope that has minimal zeroing needs. It’s ergonomically designed, and the construction is modular, containing five basic groups – the barrel group, which includes what would technically be an upper receiver; a lower receiver fire control group that ST Kinetics calls an upper receiver; a bolt/operating group; and a magazine group. The SAR-21 utilizes M16/AR-15 magazines, as well as its own proprietary designed plastic see-through magazines. There are a number of variations of the SAR-21: there’s the SAR-21GL which has an M203 grenade launcher or a proprietary 40mm grenade launcher mounted to the basic rifle. The SAR-21 Modular Mounting System has a rail system with a standard Picatinny rail on top as well as a lower rail. The SAR-21P-rail, has a standard Picatinny rail on top with the normal SAR-21 forend. The SAR-21 Lightweight Carbine has a shorter barrel and forend. SAR-21 rifles are select fire, semiautomatic and fully automatic, and are gas-operated with a two lug rotary bolt. It is not an M16-style multi-lug bolt head – it’s more of a Kalashnikov-type bolt head. The SAR-21 feeds from 30-round magazines. The rate of fire typically is 500 to 650 rpm. The integrated scope is a 1.5x optical, and there is an option to order with a 3x optical. The standard weapon length is 805 millimeter (32 inches). Standard barrel length is 508 mm (20 inches), the 20 inches being proper length for terminal ballistics for the 5.56x45mm (.223 caliber). The maximum effective range is considered 460 meters for the 1 in 12-inch barreled rifling for firing M-193 cartridges. Firing the SS-109 cartridges, M-855, the SAR-21 utilizes a 1 in 7-inch barrel rifling, considered to have a longer range of 800 meters (875 yards). Optional accessories can be the built-in laser aiming device (LAD). It has a visible red dot or an infrared option. The end user can purchase blank-firing attachments, bore-sighting equipment, spent cartridge collectors, and a bayonet and adapter. The SAR-21 is considered to be very user-friendly. It’s a simple, very effective design, with an ambidextrous charging handle that is up on the inside of the optics on the standard model. On the P-rail and Modular models, the charging handle is moved down to the left-hand side. On the SAR-21 Lightweight Carbine, the charging handle is moved back up onto the top. 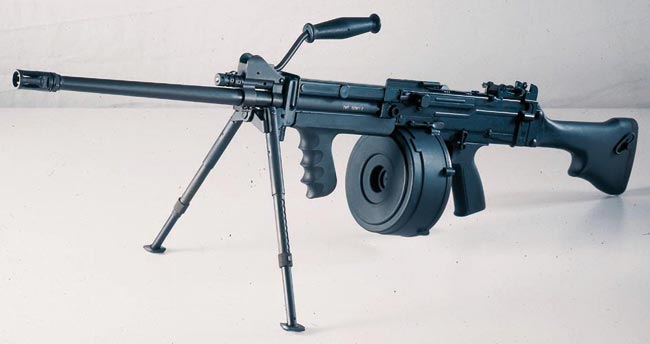 Ultimax 100
The second small arm that would be considered a flagship for ST Kinetics would be the Ultimax 100, which is the lightest 5.56mm machine gun in the world. The genesis of this current model is L. James Sullivan’s constant recoil principle, which makes this possibly one of the smoothest firing machine guns ever made. L. James Sullivan was the co-inventor of the AR-15/M16 family of weapons with the late Eugene Stoner and Arthur Miller, and Sullivan was also the designer of the Mini-14 and the original Beta C-Mag systems that came out of the Italian group, Beretta. Sullivan’s legacy is very evident in the Ultimax 100 as he spent time in Singapore doing the design work. The constant recoil principle means that the operating group is under constant pressure to the rear once it’s unlocked, it never bottoms out, and then it returns under constant pressure forward. The spring surge is worked out of the system, and it has a very long travel. In the current Ultimax designs that ST Kinetics has used, they’ve kept the constant recoil principle. The Ultimax 100 can fire from a modified M16-type magazine or from its own proprietary 100-round drums. It’s very lightweight, and an easy system to use. There is a new commando model with a side-folding stock and a shortened, quick-change heavy barrel. The shortest barrel is 13 inches in length; the standard barrel is 20 inches in length. The overall length with the buttstock attached is 1,024 millimeters. Without the buttstock it’s 810 millimeters, and yes, this weapon can be utilized without the buttstock. The weight of the firearm without a magazine is 4.9 kilograms, and with a fully loaded 100-round magazine; the total weight is 6.88 kilograms. The carrying pouches contain either a single drum pouch or there is a four-drum carrying pouch available. A twin mount that has been experimented with since the late 1970s is available from ST Kinetics today. The gas system has a three-position gas regulator allowing for the operator to adjust how much gas is given during adverse conditions or if the firearm gets dirty. It’s not a rate of fire adjustment. Like most firearms it’s simply there for difficult environments or constant use and inability to get the whole system cleaned down. The system utilizes the Stoner/Johnson-type multi-lug locking system. Current offerings are on the Ultimax 100 MK IV and MK V.

CIS50 MG
One of the most intriguing products ST Kinetics has offered lately is the CIS50 MG. This is a .50 caliber machine gun that fires the .50 Browning machine gun cartridge (12.7x99mm). The CIS50 system is set up for use in any position that could be utilized by the standard M2HB that is in operation in most of the world. The CIS50 has the added feature of having a dual feed capability. This is a manual-changed feed, from the right or the left. You can put .50 caliber SLAP on one side and 50-caliber Ball on the other, or any combination that you desire. The CIS50 has a right and a left feed chute; the operator manually lifts the cover and switches which belt is being fed into the firearm. Since the firearm is open-bolt, (negating problems with rounds cooking off in a hot chamber), this works well. It has a quick-change barrel and true fixed head space that doesn’t require any adjustments once taken care of by the operator. The operating system itself is gas operation and it utilizes two long pistons that take the gas off towards the front of the barrel at a port under the front sight post. The gas is taken off driving the two pistons, one on either side of the barrel, providing an even pressure to the rear. The bolt is interesting in that it is a Stoner-style multi-lug bolt with seven locking lugs – the eighth position is the extractor. The entire system was very easy to take down into its basic components. The engineers at ST Kinetics quickly taught the author how to strip down and examine the firearm. This is a selective fire weapon, semiautomatic or fully automatic, utilizing a push-through type selector and safety. One unusual fact about the CIS50 is this system uses a disintegrating M15A2 link, which is a push-through type link that was utilized on the M85 machine gun. This link shows how the CIS50 is radically different from a Browning machine gun. The Browning uses the pull-out M9 links where cartridges are pulled to the rear, dropped down and then insert forward into the barrel. This new CIS50 is a push-forward through and out of the link system. Singapore Technologies indicates that they’ve made approximately 10 international sales. Typical optional equipment that comes with the CIS50 can be the end user’s choice of a soft mount with a tripod adapter, a lightweight anti-aircraft mount, and they also manufacture the U.S. M3 tripod. Pintle mounts, brackets for ammunition boxes, (one for each side), blank-firing attachments, and optical scope adapters to use night vision devices or reflex sights are all available.