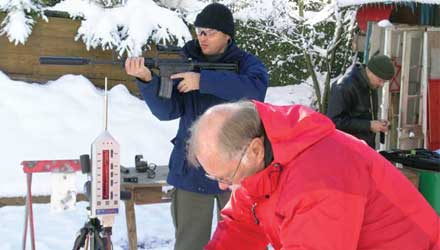 The Sounds of Silence: Part 1 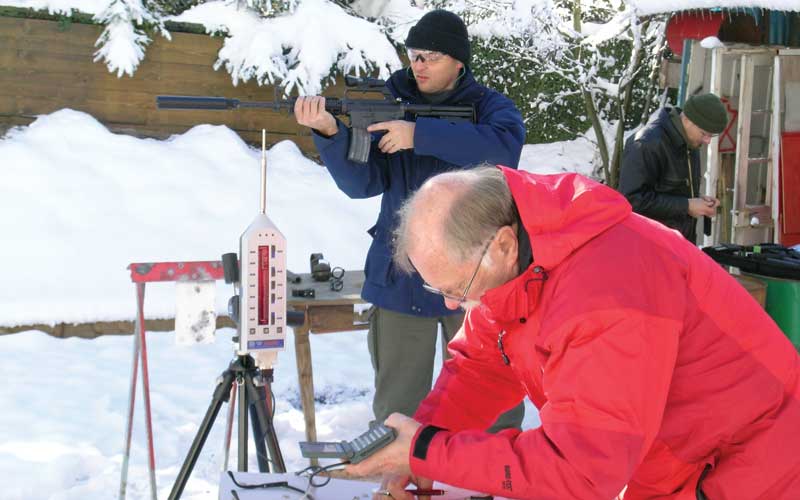 Sound testing in the field on a winter’s day at Brügger+Thomet in Switzerland with the LD 800-B meter.

Sound is defined as air in motion, which produces pressure variations that the human ear can detect.  It is a form of overpressure, and how it is interpreted depends on a variety of factors, including frequency, duration, intensity (amplitude), and variations in the observer’s hearing acuity.  The subject of this column is related to firearm sounds.

Firearm sounds are produced by the sudden release of exceptionally high pressure gases from the barrel at the instant of the projectile exiting the muzzle end (uncorking).  Depending on the cartridge and barrel length, these uncorking pressures can vary from around 5,000 to 62,000 pounds per square inch (psi).  The pressure drop is almost instantaneous, occurring in considerably less than 50 milliseconds (0.050 seconds).

Sound levels are usually expressed as decibels (dB), which is simply the logarithm (base 10) of the ratio of the actual pressure referenced to the lowest pressure that a human can perceive (defined as 0 dB).  The threshold of human hearing is approximately 5 billion times less than normal atmospheric pressure while a firearm’s sound may be over 4,000 times greater than atmospheric pressure.  A logarithmic scale is used because actual pressure ratios become unwieldy numbers.  A 3 dB difference is a doubling (or halving) of the actual pressure level and is a change that most observers can identify.

Estimation of loudness has varied from simple subjective observation (standing at a range and listening to a firearm) to use of meters designed for home balancing stereos to precision meters for measuring continuous industrial noise levels to meters with specific characteristics for firearm sounds.  With the exception of the latter, the results are inaccurate and can lead to a false sense of hearing safety.

Firearm sounds are of exceptionally short duration.  Hearing perception varies primarily with the frequency of the sound as well as the duration and the distance from the sound source.  Short duration isolated impulse sounds subjectively are not nearly as loud as a continuous sound.  For example, a jack-hammer and a pump air pistol have similar peak sound levels.  In addition, low frequency sounds subjectively are louder than those between 3 and 5 kHz, and the further one is from the sound source, the less intense the sound appears to be.

Numerous attempts have been made to create a standard for firearm sound measurements.  OSHA standards are most applicable to relatively continuous industrial noise.  The current most comprehensive standard for military noise limits and measurement techniques is Mil-Std-1474D, and the limits are generally more stringent than the OSHA standards.  While Mil-Std-1474D addresses noise risks from a variety of military equipment (including cannons and naval guns), it has a section specifically addressing small arms, which is the only section that will be addressed in this column.

A little over 30 years ago, there were no accurate standards for measuring small arms sound levels, both non-suppressed and suppressed.  Measurement criteria in the Frankford Arsenal Report 1896 (August 1968) were an attempt to quantify sound levels with the tools available at the time.  In light of today’s equipment, these results were grossly inaccurate.  Three early pioneers in sound suppressor development created a method of quantifying suppressed firearm sounds.  They were C. Reed Knight, Jr., Mickey Finn of Qual-A-Tech, and Don Walsh of Larand.  Their protocol, with only few modifications, morphed into the small arms measurement portion of Mil-Std-1474D, Requirement 4.

The meter used must meet the requirements for a Type 1 precision sound meter and be capable of measuring the highest sound peak generated by firearms (usually in the vicinity of 170 dB, although some firearms will be louder).  In addition, the rise time of the entire system (meter and microphone) must be 20 microseconds or less.  This is simply because the initial (and highest) peak has a duration only slightly greater than 20 microseconds, and any shorter rise time may well miss the peak.  30 years ago, there was only one field-portable instrument that met those criteria: the B&K 2209 with the B&K 4136 1/4 inch pressure microphone.  Subsequently, the Larson-Davis 800B meter was introduced, meeting the same requirements.  Sadly, both of these meters are out of production and their more modern replacement field portable meters have a far greater rise time, limiting their usefulness for measuring the shorter duration peaks of suppressed firearms.

Authorities in the measurement of overpressure associated with explosions suggest that sound pressure measuring systems featuring a 20 microsecond rise time (such as the B&K 2209 or LDL 800B) will miss some of the initial peak.  Although this may be true, the bias is probably small (in the order of one or two decibels).  In spite of this small bias, the standard of the firearms suppressor industry, NATO, and the US military is to utilize instrumentation with a 20-microsecond rise time.