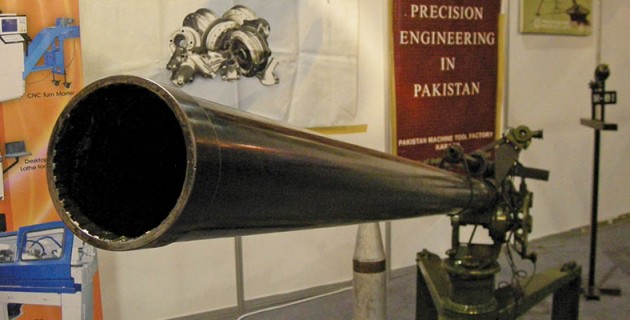 SADJ has been in contact with IDEAS Media Manager Ehtesham Bari for many years, planning to attend the IDEAS show in Karachi. We missed the 2008 show due to some issues with travel restrictions and the 2010 show had been unfortunately canceled due to the flooding tragedy. It was exciting to finally be able to set up at the show, and LMO’s Chief Armorer Instructor Matt Babb, Jason M. Wong from Hurricane Butterfly and I set out for Karachi to man the booth, explore the show, and then travel north to Islamabad and the Pakistan Ordnance Factories at Wah Cannt, and the Khyber Pass region.

7-11 November, 2012
The seventh biennial IDEAS (International Defence Exhibition And Seminar) was held at the Expo Center in Karachi, Pakistan. IDEAS filled six buildings with exhibitors from around the world and the Defence Export Promotion Organization (DEPO), along with the Ministry of Defence Production (MoDP) of Pakistan, deserves credit for presenting a truly memorable show. Two strikes were against the show at the start; the first being the four year interval since the previous IDEAS in 2008 due to the tragedy of the flooding in 2010 and second was the fact that the 2012 edition of IDEAS was scheduled the same week as the very popular, influential, and well established IndoDefence show in Jakarta. DEPO has adjusted their scheduling for the 2014 show to ensure there are no conflicting dates again. Despite these two potential negatives, the IDEAS 2012 show was a tremendous success. Over 57 nations were represented at the show with 210 companies exhibiting, with 136 of them being foreign and 74 local companies. The mix presented for attendees was an excellent blend of weapons, vehicles, first responder equipment, and the basics that keep the land and naval forces of a country running. Modern communications gear & robotics were well-represented.

To give some idea of the success, there were over 80 official delegations from around the world, and top representatives from 50 countries were officially toured through the show. There were 24 “High Level” delegations that were headed by Defence Ministers, and Secretaries or Services Chiefs from their respective countries. We at SADJ were just about the only U.S. company exhibiting (along with LMO), and we had over 11 meetings with Defence Ministers or Secretaries of the Navy of countries, notably from Pakistan, Sri Lanka, Turkey, and Tanzania, and we were very pleased with the discussions.

This 60mm Commando mortar is very lightweight & uses a bipod as shown. This is from Pakistan Machine Tool Factory, Ltd. (PMTF)

Companies attend shows like this in order to make new contacts, and reinforce old relationships, and the IDEAS staff did an outstanding job of bringing real potential customers into the show. There were over 30,000 attendees over the five-day show, and that meant the pallets of magazines we had brought were gone quickly, into the hands of the right people. We couldn’t be happier with the results from attending IDEAS 2012. Five-day shows are tough on the exhibitors and attendees alike, and the last day was more of a “Public Day” where the general public that passes muster can come in. Most shows around the world have this event, & exhibitors have to change how & what they exhibit on that type of day.

Sarsilmaz from Turkey was in the Turkish pavilion. Firuz is in attendance at most of the shows that Sarsilmaz attends and she is knowledgeable and a real resource for information on their firearms. Here she has their latest pistol.

The general consensus we gathered from talking with exhibitors was that the IDEAS management had brought in the high-value attendees they wanted to meet with. In talking with the attendees, they seemed very pleased with the large amount of, and variety of, the exhibitors and their offerings. That’s a pretty good sign. Turkey and China had their own pavilions, which in fact were private buildings at the show, large enough to house all of their exhibitors. Pakistan manufacturers were spread through the complex, but the main defence manufacturers in Pakistan, including Pakistan Ordnance Factories, fit into one of the main halls.

As a sign of our pleasure with the success of IDEAS 2012, we immediately booked in for booths at the IDEAS 2014 this coming December, and hope to see more Westerners there as the opportunities for business were very positive.

Baktar Shikan Anti-Tank Ground Missile System. This is either vehicle mounted or as shown on tripod. From GIDS (Global Industrial & Defence Solutions) company in Pakistan. It is second generation, wire guided, and capable of being fired 2-3 times per minute. This is the Pakistan made version of the Chinese Red-Arrow 8.

IDEAS 2012 Report from the DEPO
“The Inauguration Ceremony of IDEAS – 2012 was conducted on the 7th of November 2012. The Prime Minister of Pakistan graced the occasion as our Chief Guest. The ceremony was attended by Official Delegates, the Chairman of the Joint Chiefs of Staff Committee, Services Chiefs, Senior Government Officials, Foreign Diplomats and a large number of Exhibitors.

To boost Pakistan’s exports in the Defence Sector, some of the major indigenously developed products showcased during IDEAS – 2012, included Main Battle Tank “Al–Khalid,” Fighter Aircraft JF–17 “Thunder,” Jet Trainer Aircraft K – 8 and a variety of UAVs, etc. IDEAS – 2012 offered a unique opportunity to the international delegates / visitors in acquiring an insight into the entire defence manufacturing and training capabilities of Pakistan, exhibited under a single umbrella. Pakistan has a large defence manufacturing, training and support infrastructure in place, which not only meets the needs of Pakistani Armed Forces, but also has the capacity to fulfill demands of other countries with exceptionally high quality products at mutually acceptable terms.

On the diplomatic front, Foreign Delegates / Trade Visitors and Media endorsed the efficacy of IDEAS – 2012 as an extremely valuable and interactive forum for the defence trade. The signing of several MoUs between the governments and private companies has further enhanced the utility and success of this event.

In his concluding remarks, Major General Tahir Ashraf Khan, DG DEPO stated that; “IDEAS – 2012 was focused on the projection of Pakistan as a modern, progressive and tolerant state, which is willing to co-exist peacefully with the international community and regional neighbours.” He further added that, “The large attendance by key personalities of international and national stature speaks of the milestones achieved by IDEAS – 2012.” He termed the event as an extraordinary success, due to highly encouraging and extremely positive feedback received from a large numbers of Foreign Delegates and Exhibitors. He congratulated M/S Badar Expo Solutions, the Event Manager of IDEAS – 2012 for managing the event in a highly professional and befitting manner, in line with the international standards.

by Dan Shea on 5 December, 2014.
← Machine Gun Memorabilia – Volume 6, Number 3
Machine Gun Memorabilia – Volume 6, Number 4 →
Distributed at trade shows worldwide, Small Arms Defense Journal is a bimonthly publication that focuses on small arms, accessories, gear for the soldier, new products, industry news, and defense trade shows. The first issue of SADJ was Spring 2009, which launched at the LAAD show in Rio de Janeiro, Brazil. SADJ (pronounced “sage”) is targeted toward military, law enforcement, and defense industry professionals. Our job is to reach these groups and tailor content to their interests while producing a publication that is applicable to an international audience.