Browse: Home   /   Glauberyt: The Last of the Polish Submachine Guns 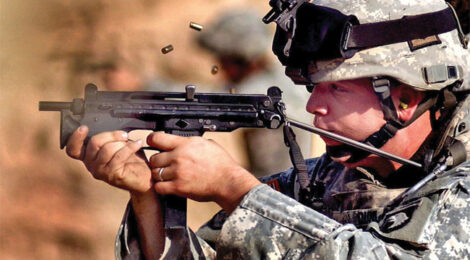 Glauberyt: The Last of the Polish Submachine Guns 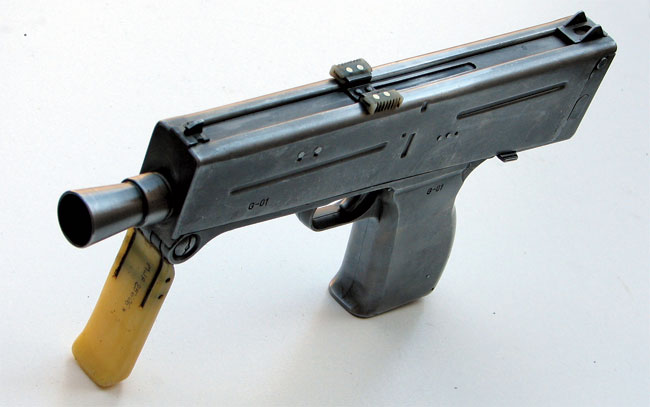 Test model of the wz.1973 SMG – the Zielonka Glauberyt.

In the early 1970s, most submachine guns still in use with the armies of the world were replaced by assault rifles shooting the intermediate round.  The days of the front-line SMG were over.  In specialized application the surviving ones were replaced by a new breed of modern low-drag high-speed models, lighter and offering more firepower in an ergonomically superior package.  New materials and production methods were applied: sheet stamping, spot welding, powder metallurgy and plastics.  Seen against that trend, Polish PM-63 Rak submachine gun, so advanced just a decade earlier, but still machined from solid billet, was rapidly falling into obsolescence.

The rapidly passing Renaissance of the SMG in its new compact guise, created a passing demand for the new firearms of that type.  The ComBloc countries, who were at the forefront of the new wave of the PDW-style submachine guns (Soviet Stechkin, Czech Skorpion and Polish PM-63 Rak) were willing to have their share of the cake, but they lacked a modern design chambered for the 9mm Luger – the old German round growing more and more popular all over the world.  Attempts at re-chambering existing guns were frustrating, even though a vz.68 Skorpion and PM-70 Rak proved to be viable firearms.  Both were however milled of a solid billet, which financially killed them from the start even taking into consideration Communist economics.  There were no alternatives: a new, compact, modern and cheap submachine gun was a must.

The hunt for the new compact SMG in Poland was not however only about the elusive export income: human and tactical considerations of the army were taken into consideration as well.  As the Rak hit the real military units, problems abounded.  The reciprocating slide was hard to master for soldiers with no firearms experiences and seasoned shooters from the elite Special Forces, who tested Rak on its way to inception, had no problems with them at all.  Novice shooters were quite the opposite.  The reciprocating slide frightened most of them as horror stories of eye glasses or even eye-balls smashed with it begun to circulate.  Then there was a real problem of shooting with the NBC mask on, where cracks on the glasses really did happen once in a while.  In the 1970s, the future war was envisaged as a nuclear conflict, with most of the war fought in NBC protective clothing.  In a heavily radioactive fallout-polluted area, a mere cracked glass was a harbinger of a certain death.

The new submachine gun TTR (Technical and Tactical Requirements) set together by the Military Technology Research and Development Main Directorates of the Polish Army’s General Staff included a condition sine qua non for the future firearms: no more experiments with open slides except for the handguns.  All future guns were to have a closed receiver with the bolt reciprocating within.

After the TTR of the new project, code-named Glauberyt (glauberite, or sodium calcium sulfate), was sent out to all small arms developing centers, three separate teams at two of these took to designing the new SMG.  The code-name was issued according to the new code-naming guideline, allocating the new small arms projects the minerals (glauberite, pyrite etc.) or the Mendeleyev periodic table’s metals (beryllium, vanadium, tantalum, etc.).

The Zielonka Glauberyt
A Glauberyt team of the Military Ordnance Technical Institute consisted of three Lieutenant-Colonels, Henryk Adamczyk, Jerzy Okraszewski and Ryszard Szydlowski.  Theirs was a concept of a compact, small SMG of very original – yet overly complicated – design.  The lower receiver integral with a pistol grip was meant to be eventually made as a single plastic casting, similar in concept to the then rave Austrian Steyr MPi-69. 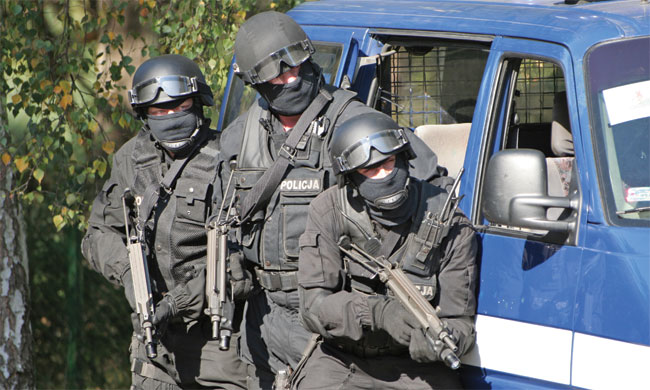 Polish National Police SWAT team ready to deploy with early PM-98 submachine guns fitted with Surefire tactical lights. Their later model, with a short rail on the receiver cover were seen in action on August 29, 2010 in Rybnik, Silesia, when an intoxicated madman opened fire at his family and passers-by in the street, wounding 7 people, including one police officer with illegally possessed firearms (incl. HK MP5K). After a three hour-long siege the gunman came back to his senses and surrendered to police.

According to the original concept, the gun was designed for both 9mm Makarov and 9mm Luger chamberings.  The caliber change was to be executed by exchanging barrels only: the magazine and bolt were universal.  It was a selective-fire blowback automatic firearm, firing from closed bolt.  The rate of fire was retarded by a complicated multi-part pneumatic-and-inertia rate of fire retarder.

In 1972, a set of blueprints was fabricated, labeled Pistolet maszynowy wzór 1973 (M1973 SMG).  Then in late 1974 and early 1975, two testing models were manufactured, s/n G-01 and G-02, sporting an aluminum lower receiver.  The costs of manufacturing a die for the plastic receiver at this early stage was deemed far too high to even consider.

The testing proved the design criteria: rate of fire was reduced to about 750 rpm despite a very light weight of the reciprocating parts and the short track bolt.  The gun was small, compact, handy, and seemed insensitive to field conditions.  The cartridges were fed from 15 and 25-round magazines held in the pistol grip by a catch at the heel of the grip.  A plastic cocking handle was placed on top of the receiver, reciprocating between the square front post and flip-over sight with two sighting notches.

Despite the initial plans, both models were chambered for the 9x18mm or 57-M-181S round, better known as the 9mm Makarov.  The compact size enabled the SMG to be fired single-handedly or with both hands, using a telescoping shoulder stock and a folding foregrip.  In 1976, further development was halted due to technological problems with the plastic lower receiver production.  Before the project was closed, a new set of blueprints were produced for an altered, modified model, also with a plastic lower receiver called the Pistolet maszynowy wz.1977 (M1977 SMG).  This was, however, never to be put in metal.


R-75: The Radom Glauberyts
At the same time there were two competing Glauberyt (Project R-75) research teams created in the Research & Development Center (OBR) of the General Walter Metal Works in Radom.  Ryszard Chelmicki, Janusz Chetkiewicz and Stanislaw Bryx formed the first of these.  Their submachine gun was a pure blowback design with the magazine well in the pistol grip and bolt telescoping the barrel for optimal equilibrium.  The general layout was to resemble the Uzi, which was at that time deemed to have the optimal disposition for a compact submachine gun.  Yet it was not to be another Uzi-clone, as their R-75-I was to fire from closed bolt position with an internal hammer and have a mechanical, inertia rate of fire retarder, oscillating vertically in the pistol grip’s rear channel, perpendicular to the bolt movements – vaguely resembling the one used in a Czechoslovakian Skorpion.  The gun was to be manufactured with sheet-metal stamping and spot welding methods, with a bare minimum of machined parts.  Even before the model was commissioned, the OBR’s management demanded the team to prepare an alternative model, chambered for the 9×19 Luger.  This was a rare display of far-reaching perspective being taken by the industry with a view to possible export, as well as a way to vent-off the recent frustration of the aborted PM-70 Rak modification to take the 9mm Luger round despite its success.  The solid front sight post was taken directly from the PM-63.  The stock was made of wire, and folding to the top of the receiver, with a spring-assisted opening – again a clear indication, that the designers knew and appreciated the Skorpion.  The bolt cocking handles were plastic, but the first ever shooting test left them shattered, and another Skorpion idea was then borrowed: the button-like cocking handles protruding from the receiver sides.  Both the R-75-I test model and the prototype series R-81 SMGs retained these.

A peculiarity of the R-75-I was the sight, taking the shape of a triangular plate, rotating on an axis which was set parallel to the bore.  This plate had three peep holes for shooting at 100, 150 and 200 meters, with a square notch filed between the 100 and 150 peep holes, used for aiming at 50 m.  Right from the start, the R-75-I was planned to be fitted with an external bolt catch lever – which was a novel idea for the SMG at that time on both sides of the Iron Curtain.  The characteristic sheet-metal safety-selector lever on the receiver’s left, right behind the pistol grip, survived from the first pre-prototype up until PM-06 model, when it was made ambidextrous.  The bolt is oscillating inside a sheet-metal formed, square-sectioned upper receiver.  The receiver cover was latched by the side projections of the rubber-bumper mounting-plate to which doubled return spring rods (another Skorpion idea) were fastened.

The other OBR’s team, lead by Wladyslaw Krawczyk and Marian Gryszkiewicz, came up with quite a different proposition.  Their R-75-II (or R75-W2 as it was inscribed on the test model) was also a blowback design with sheet-metal stamped receiver, but there the similarities ended.  The bolt also telescoped the barrel, but it was a striker-fired weapon with the striker cocked on the rearward stroke of the bolt.  There was an investment-cast muzzle brake, bayonet-connected to the muzzle, which at the same time performed the tasks of the gasodynamic rate of fire retarder, bolt cocking device (inspired perhaps by the PM-63 Rak) and forward return spring attachment point.  The sight was of a cruciform shape, rotating on an axis set perpendicular to the bore.  The four plates of the cruciform were fitted with a notch for 50 meters and three peep holes for aiming at 100, 150 and 200 meters.  The front sight was screwed into a drift-adjustable dove-tailed holder.  The trigger mechanism used a two-stage trigger – enabling to fire single shots or burst according to the length of the trigger pull (as in PM-63 Rak).