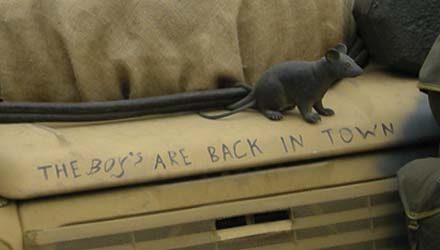 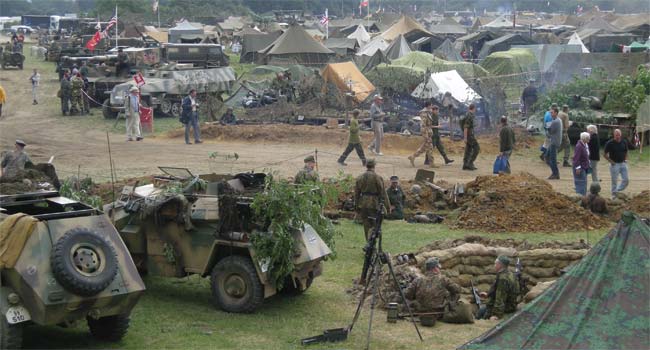 The War & Peace Show, also called “The Beltring Show” by many, is an incredible experience. SADJ decided to bring the readers a short report on this amazing civilian “Militaria” show, since it is coming again this summer and, without question, is the largest militaria show in the world. War & Peace also provides an opportunity for military historians, end users, and people in the industry to see up close the weapons and kit used in conflicts all over the planet. The displays cover the full 450 acres of the Hop Farm recreational facility which is southeast of London in Paddock Wood, Kent. You read that right, 450 acres of display areas.

The sunshine in Southern England in July is marvelous, and frequently the War & Peace show is blessed with outstanding weather. If it rains, well, be prepared for mud: this is England after all.

The show is divided into several parts: the Militaria sales section, reenactor encampments, display areas, as well as the military vehicle arena where every conceivable military vehicle from early French tanks to modern US M60A1 tanks, to SAM missile trucks are displayed and talked about as if they were models on a fashion runway. Car-crushing events are very popular with a variety of tanks blank-firing then running over hapless car bodies to the cheering of the crowd.

All of this is done in a carnival atmosphere, with perhaps 50,000 attendees over five days. There are 1940s period bands playing on Friday and Saturday night, as well as true fashion shows for the WWII era reenactors with both military and civilian clothing being shown. For a taste of the fashion, go to www.1940.co.uk and check it out.

On a more sobering note, three original members of the US Army unit “Easy Company” from the 506th PIR, 101st Airborne Division, immortalized in the HBO series Band of Brothers, were at this year’s show. They interacted with the crowd, and were quite impressed with the War & Peace Show. We were honored to have Buck Compton, Don Malarkey, and Earl McClung attend. They kept the focus on their unit and the sacrifices of all, as one would expect from such heroes. Among all the fun and fancy of the show, they served as a true reminder of the hard reality and sacrifice represented by the living history around us.

If you have the opportunity, SADJ recommends a vacation at this show, combined with seeing other sites in the UK of course. 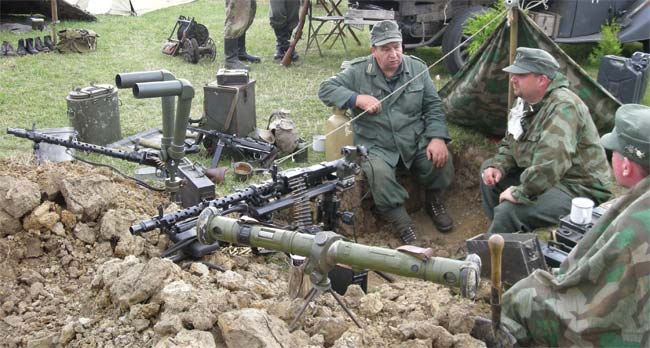 WWII German foxhole display. In this set, the actors have chosen a specific unit and location that is unnamed. In the foxhole is a 7.92x57mm (8mm) MG34 machine gun on the Lafette mount that allows the gunner to keep his profile much lower, a Mauser 98k bolt action rifle in the background, and an MG34 on its bipod, as well as the long horizontal tube of a range-finder and the odd profile of a pair of adjustable trench binoculars. Center of the photo on the ground is a German MP40 submachine gun in 9x19mm, often misnamed as a ‘Schmeisser’ by Allied troops. 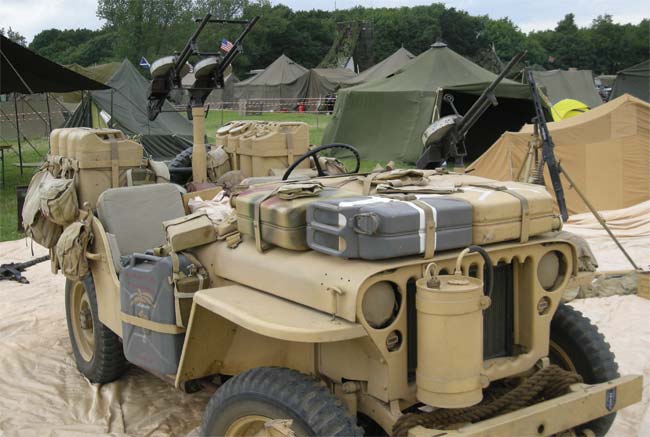 These reenactors have chosen a British ’Rat Patrol’ type vehicle display in North Africa during WWII. Aside from some typically scrounged German kit like the Nazi marked gas can on the driver’s side, the ‘Willies’ has twin pan-fed Vickers GO (Gas Operated) air cooled machine guns on a rear mount, as well as a single Vickers GO mounted for the passenger’s use. In the background is an adopted German MG42 LMG on AA mount. 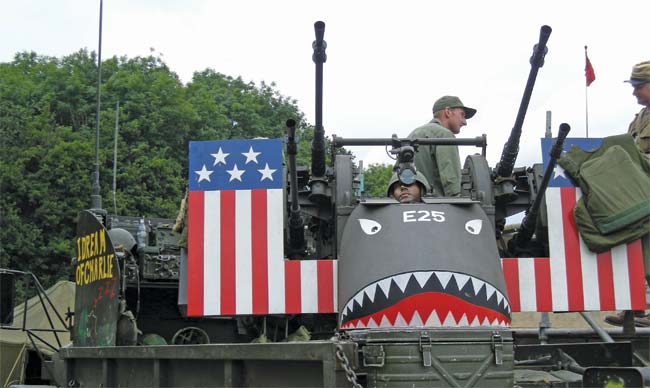 Moving ahead in time, we find a large section of reenactors who have chosen the Vietnam War as a subject. For Old Nam Vets this can be a bit disconcerting as you walk into ‘Juicy Lucy’s’ bar or round a corner and bump into people with DShK 38/46 heavy machine guns and SKSs, dressed in black pajamas and Ho Chi Minh sandals, but it’s all in perspective when you’re greeted with ‘Cheers’ and a smile. The actors have done an excellent job, and in this picture there is a gun truck with quad fifties on it, painted up to resemble the famous ‘I dream of Charlie’ with the US Flag on the business end of the armor. The four M2HB .50 caliber heavy machine guns are properly set, and this makes for one impressive display among the many there. We’ll leave it to others to fantasize of what heavenly concoction might be in the Marmite chow container on the back of the truck. 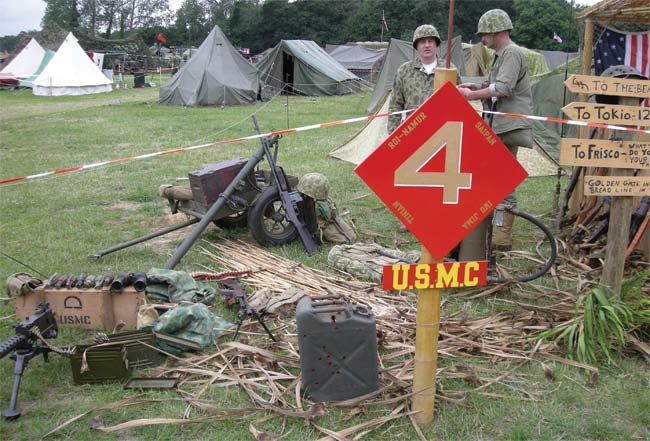 These British reenactors have chosen the US 4th Marine Division in the WWII battle of Saipan as their subject. The late military historian and Korean War Veteran of the 4th Marines, William Vallerand, had the opportunity once to speak with these actors and to encourage them in how accurate their kit for the 4th Marines was. In this display is a 1919A4 Browning machine gun in .30-06 caliber on M2 tripod, an M9A1 two piece 2.36 inch bazooka, an assortment of M1 Carbines, M1 Garands, and Thompsons. There are two of the famous 1918A2 BAR Browning Automatic Rifles in this display. The one in the foreground is a classic configuration on its bipod and the one to the rear may be technically more accurate in that the bipod has been tossed away as superfluous extra weight in jungle patrol fighting, and the forend is a checkered 1918 series. 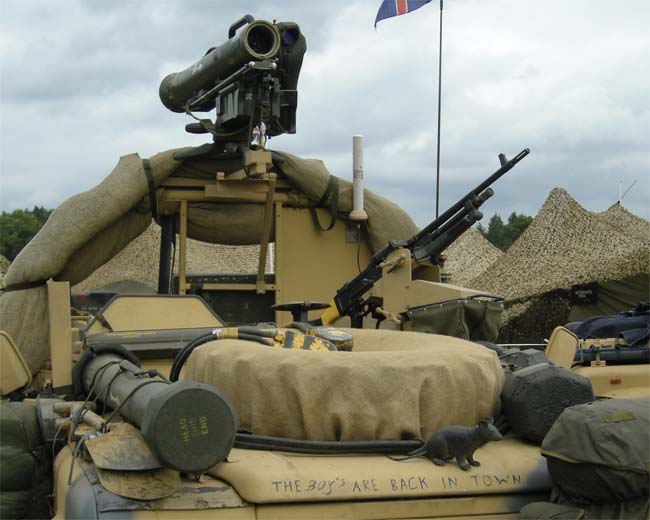 ‘The Boys are Back’ British display of modern desert fighting era. Various shoulder fired and vehicle mounted rocket launchers include the M72 HEAT tucked in horizontally on the hood. The L7A2 GPMG (General Purpose Machine Gun) nickname pronounced ‘Jimpy’ at the passenger’s disposal make this a formidable traveling fighting vehicle, and an excellent display. 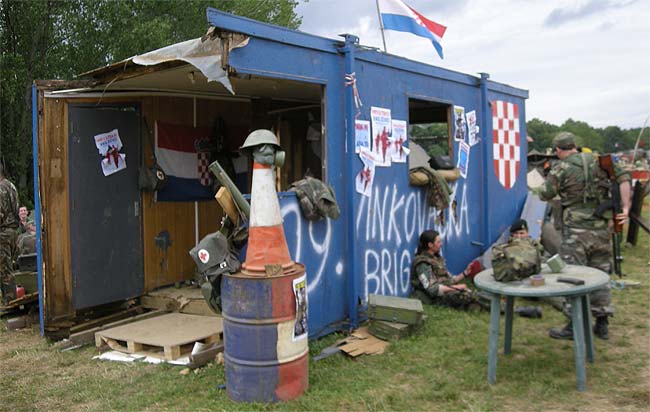