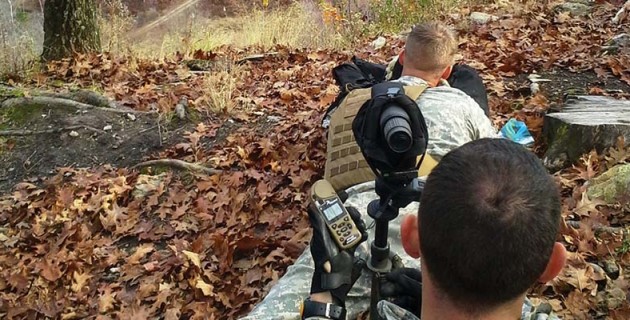 In Moneyball, The Art of Winning an Unfair Game by Michael Lewis the story is about the Oakland Athletics baseball team and its general manager Billy Beane. Its focus is the team’s analytical, evidence based, sabermetric approach to assembling a competitive baseball team, despite Oakland’s disadvantaged revenue situation when compared to a team like the New York Yankees.

For 12 years the military has had New York Yankee levels of money. “The nation has paid for everything we have asked for since 9/11. It has made us intellectually lazy.” (Retired Lieutenant General Paul Van Riper.) “When the money gets short, it’s time to think.”
Snipers are a remarkable breed. Given the multitude of factors that can cause a bullet to miss its intended target, it is a wonder that snipers are consistently able to hit anything, especially at extended ranges. Humans are of course, the ultimate fire control system. Science will never supplant a trained sniper. Technology can only augment the skills that snipers already possess. However, with bravado set aside, snipers tend to only remember that one remarkable shot in combat at 800 meters. The sniper tends to overlook the number of rounds expended in training and combat and they attribute any “flyer” in a group to fate. Military strategists need to strive to provide snipers with the best tools available so that they can do their job but as cheaply as possible.

Bryan Litz, renowned competitive shooter and ballistician, has created an analysis method called The Weapon Employment Zone, or WEZ for short. The WEZ analysis is model based, statistic in nature, and quantifies the hit percentage of a given shooting system on specified targets as a function of range. This analysis is carried out using defined uncertainties related to practical field shooting. With this capability, you can calculate your probability of hit for specific weapon systems in different levels of environmental uncertainty. The value of quantifying the hit percentage of a given sniper/rifle/ammunition combination is that the information can be used to quantify sniper effectiveness in war gaming scenarios. In short, the WEZ aims to increase the first round hit probability of the sniper team, thus reducing target engagement time by reducing the number of rounds spent to score the first hit. If a sniper hits the target 99 percent of the time, then you can feel pretty safe predicting that he’s going to hit it the next time he shoots. So knowing the sniper’s rate of success tells you that he’ll almost certainly accomplish the mission. In summary, the WEZ can be used to assist the decision makers on how to decide on where to focus training resources, budgets, etc. (Accuracy and Precision For Long Range Shooting – Bryan Litz). The Applied Ballistics Analytics package retails for $200 USD. The cost of the standard sniper round M118LR (AA11) is $1.25 USD. Fiscal Year 13 ammunition cost expense at the United States Army Sniper School $489,739. Could the WEZ cut those costs in half? Can it lead to better planning on how to effectively train a new sniper?

Not surprisingly, the WEZ analysis shows range and crosswind to be the two variables that lead to the greatest error in a miss. Range uncertainty is almost a given when in an unknown environment. The sniper has to rely on various methods of range estimation to assign the correct range to the target. The most common range estimation method used by snipers is to use the reticle inside their scope to measure a target using a reticle graduated in Mil dots. A simple formula is applied that uses the actual target size in inches, and the size of the target in the scope’s reticle to formulate a range to the target. This method is effective, but is subject to uncertainties. With recent advancement in technology, the sniper now has access to more sophisticated tools to measure range. The newest device to hit the market is the Wilcox RAPTAR-M with built in Applied Ballistics software. The RAPTAR is a very unique device that incorporates both visible and IR aiming lasers, an IR illuminator and a laser range finder that displays the range to the target via screen. The RAPTAR-M model with the built in Applied Ballistics software includes its own ballistic computer with back-lit LCD screen and weather chip to monitor atmospheric conditions. The RAPTAR-M’s rear display also provides the sniper with a virtual cant device, elevation information specific to your rifle load and the ability to manually input windage. The RAPTAR-M also has the ability to communicate with other Bluetooth devices via other Applied Ballistics devices such as the AB Kestrel. This type of synchronization can provide live wind data for a complete firing solution. Wind will always be the snipers worst enemy. Instrumentation can help the sniper hone one’s ability to “read” the wind. A Kestrel wind meter is a staple piece of equipment in a snipers toolbox. The sniper can use the Kestrel at anytime and practice guessing the wind speed that you feel or see in the indicators then apply that to what they might see downrange in similar indicators such as vegetation. Another excellent training tool for wind is the Ventus System from DownRange Systems. This system allows the sniper to know what the winds are doing down range, where it has the most effect on the path of the bullet. There can be several different wind conditions present at any given time on a typical shooting range. Shifting winds, lay of the land, trees, and other obstacles make accurate wind calls difficult. By using the Ventus with a Kestrel 4500 wind meter, the sniper can obtain accurate wind velocity and direction from up to 1 mile away from his location. It is an invaluable tool for learning/teaching the fine art of calling wind. DownRange System’s Ventus Kit allows the user to place a Kestrel weather station down range at long distances and receive accurate and fast transmission of data.

The tools mentioned above would cost the military no more than what a used car would cost. Despite what the Pentagon wants to believe, the next conflict isn’t going to be won by robots or drones, but by smart, adaptive men who look for ways to innovate ones set of skills to build the perfect sniping team.