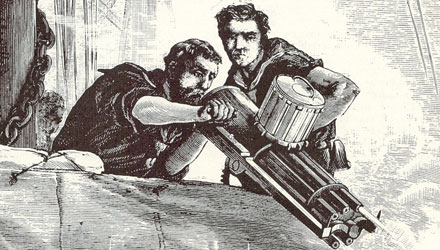 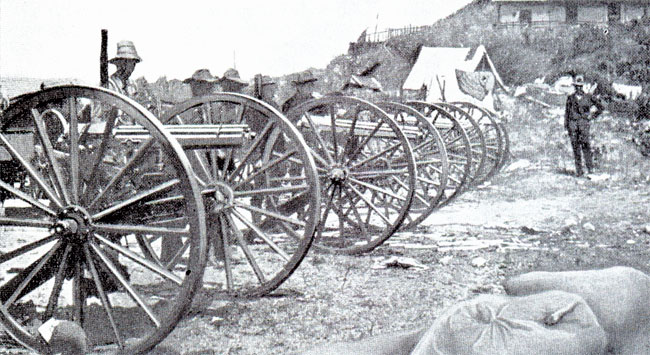 Gatlings at the ready just prior to departing for the front in the Spanish-American War.

Machine guns today are generally defined as firearms that shoot automatically more than one shot, without manual reloading, by a single function of the trigger.  This modern definition has come about due to the development of such a weapon as pioneered by Hiram Maxim and John Browning and is subsequently used for all weapons that employ this mechanical means in firearms today.

Before Hiram Maxim invented the truly automatic system of feeding, loading, firing and ejecting continuously with just a single function of the trigger, “machine gun” was a term applied to a weapon that provided these functions albeit in a manual mode of operation.  In reality, the evolution of automatic weapons really began before the introduction of gun powder.  From earliest times, there has been a continual attempt to augment firepower by mechanical means.

While these were large crew served weapons, there was mechanical development in the individual combatant’s weapons to increase firepower, range and lethality with the crossbow being a good example that evolved into a weapon firing a number of arrows.  One could say that a general definition of an automatic weapon in these early days would be a weapon capable of discharging a number of projectiles in a short space of time, either simultaneously or in rapid sequence.

In order to study the evolution of the modern automatic weapon from its crude beginnings, it will be necessary to separate automatic weapons into four general classes with the advent of gunpowder.

This article will deal with elements of the first three classes of weapons. 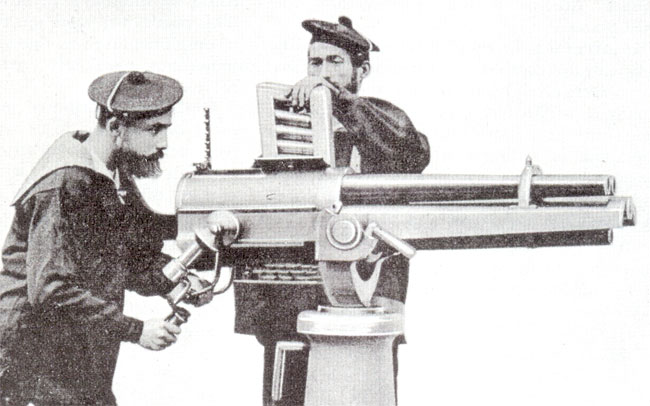 Organ Guns
Organ Guns (or War Carts) were primitive, yet effective, multi-chambered and multi-barreled monstrosities.  As early as 1339, a firearm called the Ribauld, or Ribauldequin, was mentioned as a having several iron tubes that were arranged to fire stone projectiles simultaneously.  This weapon was purportedly used to good advantage by Edward III in one of England’s wars with France by blasting an opening in the unyielding ranks of heavily armored pikemen who were to keep the cavalry from the bowmen.

These muzzle-loading battery guns had their barrels arranged in a side-by-side arrangement in a massive wooden frame that led to them being called “Organ Guns.”  When the iron ball projectile came into use in 1381 replacing pebbles and stones, many new variations of the Organ Gun were developed, all in an effort to deliver a great quantity of projectiles in a concentrated area all at one time.

In 1382, the army at Ghent had 200 battery guns.  A design constructed in 1387 had 144 barrels grouped in batteries of twelve allowing twelve salvos of twelve balls each to be fired.  In 1411, the Burgundian army had 2,000 battery guns at their disposal.  Louis XII (1498-1515) is reported to have used a gun having 50 barrels arranged to be fired in a single volley.

Obviously, these weapons were clumsy and difficult to transport and could be termed only a moderate success.  Though all the barrels could be fired in a single volley or in rapid succession, long periods of inaction due to the manual muzzle reloading of each barrel negated the advantage of momentary volume of fire and were thus employed in an auxiliary or supporting role due to its inability to deliver sustained fire.  Nevertheless, their volume of fire was in great demand and used in many theaters of operation throughout Europe. 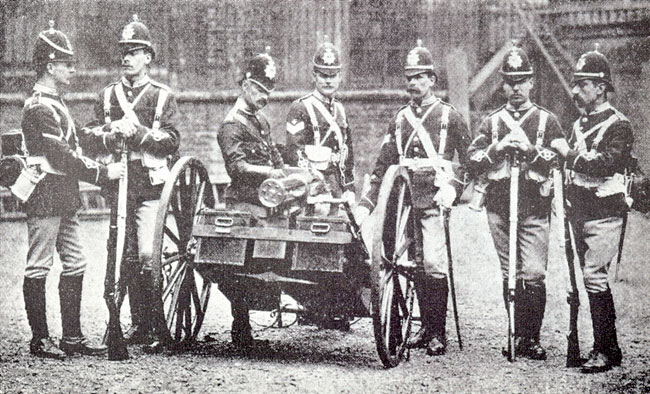 Though there were many variations as to arrangements of barrels and mounting, the only improvement on these weapons was the train of ignition from one barrel to another.  It was shortened in order so that all the barrels could be fired simultaneously or as nearly as simultaneously as possible.

Puckle’s “Defense” Gun
Further development of rapid-firing weapons stagnated due to a lack of technological advancement, particularly in ignition.  In the beginning, the practical system of ignition was a manually applied slow-match or fuse.  From the thirteenth to the sixteenth century, the slow-match continued to be the primary means of ignition though improvements were made to the application of this method; though fire was still required for ignition.  From the sixteenth century to 1807, an era of mechanical means of producing fire evolved using friction of flint upon steel to produce a spark.  Wheel-lock and flintlock mechanical methods were prevalent at this time but they did not lend themselves to producing any new revolutionary advancement in rapid fire development.  There were many ideas presented by a variety of inventors, and, perhaps a single working model was built, but no guns were ever actually put into production – with one exception.

In 1717, James Puckle demonstrated his gun, called the Defense, to the English Board of Ordnance and a patent, number 418, was granted in London on May 15, 1718, on a single barreled gun with a revolver-like mechanism that allowed a semblance of rapid fire operation.  In a demonstration in 1722, Puckle’s gun fired 63 shots in seven minutes; a truly remarkable performance at this time period.  The English Board of Ordnance remained unimpressed and no further action was taken on their part.  Nevertheless, Puckle’s Defense gun actually went into production, an example is extant, and is historically important for a number of reasons.

The machine gun that we recognize today had to have a genesis in concept.  While Puckle’s gun is nowhere near what we now have today operationally, it did contain certain aspects that are worth noting particularly with its mount.  The gun operated using a flintlock ignition system on top of the cylinder.  A crank arrangement at the rear of the cylinder tightened the cylinder up against the barrel.  When tight, the flintlock was activated, igniting the charge in the chamber and expelling the bullet.  The crank was unscrewed loosening the cylinder, which was turned to present the next chamber to the barrel.  The screw handle was tightened and the gun was ready to fire again.  When all the chambers were empty, totally unscrewing the crank allowed it to be removed, the revolving chambers removed, and a fresh, loaded set replaced.  A particularly odd feature of the Puckle gun is that the inventor provided two sets of chambers for his gun.  One provided for shooting square bullets for use against Turks and the other shot round bullets for use against Christians. 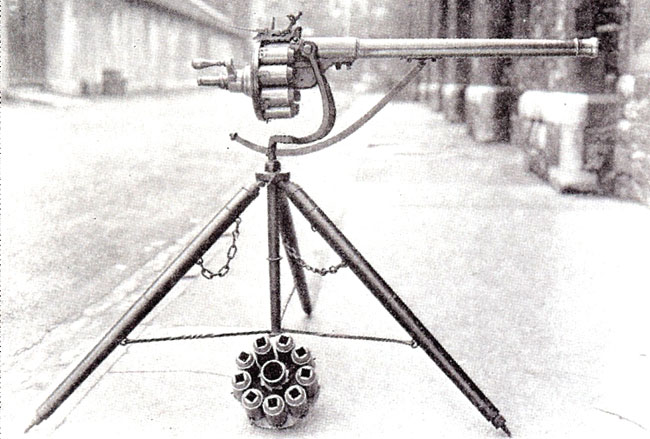 The primary weakness of the Puckle gun was the employment of a flintlock system of ignition.  On a more positive note, what is particularly interesting is the mounting system employed that is very much reminiscent of tripods used almost two hundred years later.  The legs are prevented from spreading beyond their intended width by use of a chain, solid rods connected to the legs and center post are used for holding the legs in position and the elevation mechanism of a guided metal arc has been subsequently used on a number of more modern weapons.

Once again, reliable mechanical development was hindered until the advent of percussion caps in the early 1800s, and in the next 75 years following the percussion cap patent, more was accomplished in terms of design, development and performance of firearms in general than at any time in all of history.

An interesting historical side note is that in 1829, Samuel L. Farries of Middletown, Ohio received a patent for a repeating cannon that had been in use since the War of 1812, and has the honor of receiving the first “machine gun” patent by the U.S. Patent Office.  The term “machine gun” was used and assigned to imply any mechanically operated weapon of rifle caliber or larger, regardless of whether the energy necessary for sustained fire is derived manually or from some other power source.

During this period, there was an abundance of ideas of how to make a machine gun “work,” including the use of steam and gas.  Some did actually work but were too impractical and complicated.  But it was the continued work on ignition that dictated the mechanical future of automatic weapons, and it was the advent of incorporating the detonating cap as an integral part of the fixed cartridge in 1856, and the first true metallic cartridge with a center fire primer and an inside anvil invented by George W. Morse in 1858 that set the stage for machine gun development.