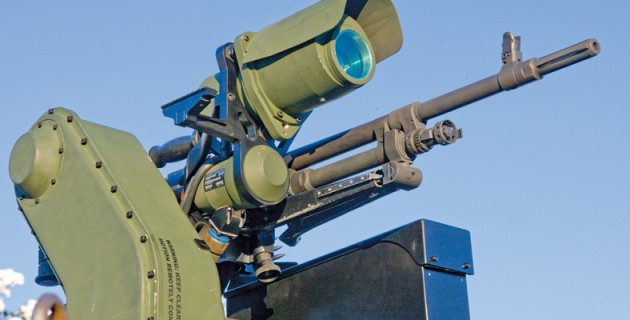 ABOVE: Protector Super Lite – the man portable RWS. This RWS is designed as a light weight, man portable weapon station that can be operated both remotely and manually. (Photo: Kongsberg)

There are many hundreds of vehicles across the world in international peace making/peace keeping operations that are not equipped with remote controlled weapon protection systems on the vehicle’s roof that can protect the gunner who could sit in the inside of the armoured vehicle.  Many vehicles are only equipped with a machine gun that the gunner has to operate unprotected when he/she is staying in the vehicle’s roof opening.  In situations like this, the gunner is exposed to a very dangerous unprotected situation being a target for snipers, being a victim of exploding mines and improvised explosive devices (IED).  This gunner has to aim, estimate the range and engage the targets manually and the hit probability is dependent on the gunner’s skills.

The loss of 10 French soldiers and their Afghan interpreter after a spectacular August 2008 ambush by insurgents in the Surobi district had pushed the French Army to review equipment and tactics, highlighting crash procurement programs.

Afghan insurgents in the Uzbeen Valley fought a close-quarter fight with a 100-person patrol and kept it pinned down for nine hours with heavy fire.

The need for troop protection led to a fast-track buy of 60 Kongsberg’s Protector remote weapon stations equipped with a 12.7mm machine gun.  The remote controlled weapon stations are a retrofit on the VAB troop carrier.  The death of a soldier caught in a car bomb explosion in October 2008 in Afghanistan led to a request in December 2008, and a contract worth 20 million Euros was signed with Kongsberg.  The 60 units were a first batch of an overall purchase of 600 turrets. Protector Remote Weapon Station
Kongsberg Protech Systems is the world leading producer of remote controlled weapon stations providing flexible system solutions that meet the customer’s specific requirements.  More than 17,000 systems have been delivered worldwide.  With more than 25 million hours of operation and over 20 million hours in combat, this weapon station has been selected, or is already in service, by 17 nations.

The main elements of the Protector consist of two parts: one on the vehicle’s roof, and one inside the protected vehicle.  The guidance and control unit consists of a computer and a display in the same unit making the control unit one single box mounted inside the vehicle.  The gunner has a joy stick and switches on the control unit for changing sensors, changing to training mode, arming and firing.  These switches are mounted around the screen display.  Controlling the weapons platform is usually done using the joystick.

All information goes through the software from the computer to the weapon station.  For firing, the commander gives the order, and the information to the gunner is through a pure electrical signal by a separate cable.  This is important for reasons of security so that software errors do not cause unintentional firing.

The Protector solution allows the joint combat commanders to quickly adapt to different mission profiles with the capability to overmatch and to defeat the enemy.  One of the main features of the Protector is the unique highly accurate 4-axis system, which allows the gunner’s cross-hair to get dead on the target under all engagement phases either on static or moving targets.  The Protector’s fire control solution gives continuous accuracy and automatic adjustment of the line of bore both in super elevation and drift to ensure impact where the gunner aims the reticule, irrespective of range and speed of vehicle on the road or pitch.  The gunner selects the decided ammunition and lays on the target.  Engaging moving targets is no challenge for the Protector system.  When tracking the target, the automatic pitch and roll compensation are continuously calculated compared to target range and speed with continuous ballistic calculations and lead angel compensation.  The system also continuously compensates its vehicle pitch an roll, ensuring rapid engagement on target with high hit probability. The Protector is superior in areas of reliability, safety and ability to tolerate extreme temperatures – operating in temperatures from -46° to +65° Celsius.

Different Product Models
The Protector Remote Weapon Station was developed to ensure the protection of military personnel in armoured vehicles.  It is compatible with a wide range of small calibre weapons such as the M2 .50 calibre (12.7 mm) machine gun, the M240B 7.62mm machine gun, the M249 5.56mm squad automatic weapon and the MK19 40mm automatic grenade launcher as well as the Javelin anti-tank missile.  The Protector system features power integrated electro-optical sensors for target observation, as well as advanced ballistics computing and image processing.

The Protector Remote Weapon System family now comprises four distinct products: the original Protector NM 221 (which allows the user to reload ammunition from within the vehicle – specially designed for the Norwegian M113), the M151 Protector, Protector Lite (designed for smaller vehicles and armoured trucks with smaller calibre weapons), and the CROW-version.  The Sea Protector, a navalized variant based on the M151, has been tested by the Norwegian Coastal Defence force with Hellfire missiles fired from Combat Boat 90.  The Sea Protector is designed to provide self-protection for naval vessels.  The Sea Protector has been sold to the Finish Army, and to the Norwegian Armed Forces.  The system is also integrated on the Royal Norwegian Navy’s new Fritjof Nansen Frigate, which has been patrolling in the “pirate” area.

At the Eurosatory show in Paris, Kongsberg displayed a version of Protector with a mock-up of M-72 rockets armament bracket for the Protector (designated RAM – Remotely fired Anti-structure Munitions).  RAM is based on the well-known M-72 system.  This system has gone through numerous improvements over the years based on worldwide combat experience as well as new requirements from the users.  The new RAM offers scalable effect in the target ranging from low collateral damage to maximum penetration.  The new warhead features an enhanced blast explosive to ensure maximum effect in structures.  With an effective range of approximately 200m this represents the preferred choice for urban war fighting. As part of co-operation between NAMMO Group and Kongsberg, the RAM has been tested and integrated on Kongsberg’s battle proven Protector Remote Weapon Station while the operator remotely controls the system from a protected position inside the vehicle.  These rockets are cheap, but good for combat in urban environments.  The new RAM offers scalable effect in the target ranging from low collateral damage to maximum penetration.

M151 Protector When Experience Counts
The M151 Protector provided to the U.S. Stryker brigades for their vehicles are currently in use within the U.S Armed forces.  Variants of the M151 Protector systems, has been delivered to 17 other nations.  Weight of the weapon station is about 135 kg and the height of the construction is 74.9 cm.  The ammunition container on the side has a space for 200 rounds (for the 12.7mm machine gun on this model).  The tubes on the left and right sides are smoke grenade launchers.  The weapon station has a rotating speed is 90 degrees per second.  The elevation angle is from -20 degrees to +60, at approximately 70 degrees per second.

The gunner operates the Protector from within the safety of the vehicle’s protection armour.  Characteristics include:

The Protector Nordic was chosen and developed in close cooperation with the Norwegian and Swedish Armed Forces.  This system reflects the most technically advanced RWS ordered to date, and is forming a solid foundation for cooperation in Nordic material programs.  The extended functionalities includes the Kongsberg produced Day Camera VIS with 95o field of view and Kongsberg Infrared Aim Laser (850 nm). M153 Protector
The M153 Protector is the weapon station selected for the U.S. Army’s Common Remotely Operated Weapon Station (CROWS). The last version for the U.S. Army is named M153 CROWS II.  This version is primarily based on the M151, but this version has a bigger ammunition container with a capacity for 400 rounds of 12.7mm ammunition.  It lacks a smoke grenade launcher, which the Americans have replaced with a ballistic shield (side plates on both sides of the sensors).  Machine guns like the M2 .50 cal (12.7mm), the M240B 7.62mm machine gun and the M249 5.56mm squad automatic weapon can be mounted on the M151 and M153.  Weight of the weapon station is about 145 kg and height is 76.2cm above the roof.  As already mentioned above, Protector uses a 4-axis system that allows the camera’s Line of Sight (LOS) to be independent of the weapons Line of Bore.  Theses four axis are: the main azimuth axis of the weapon station; the main elevation axis of the weapon and sight assembly; the sight axis azimuth; and the sight axis elevation.

Adding a secondary weapon to the Protector RWS has been done in various versions, but the main development has been focused on implementing support for the JAVELIN missile, and has successfully been fired from the M153 RWS, fully integrated.

Sea Protector – the Maritime Remote Weapon Station
Equipped with Sea Protector, increased dominance will be achieved over opposing forces.  On interceptors and small patrol boats, Sea Protector serves as the main armament.  On ships, it provides self-defense and increased capability to counter asymmetric threats, at sea or in harbour.  All this while the crew remains safe and unexposed to hostile fire.  Multiple weapon stations can be networked and operated from the Combat and Bridge Systems.

Protector Lite
This is a light version for weapons with low recoil like 5.56mm and 7.62mm machine gun.  Its lower weight compared with the “brother’s” 128 kg – is about 74 kg on vehicle roof with its sensors and laser range finder allowing this weapon station to be mounted on smaller vehicles.  The height is 61 cm above the roof.  The platform is fully stabilized and provides unmatched observation and engagement capabilities. Protector Lite has a high degree of commonality with the proven M151 Protector and M153 Protector CROWS.  The thermal imager has a dual field of view, autofocus and e-zoom.  The color daylight camera allows a wide field of view up to 45 degrees while observing, and more than 30 times optical magnified close-up view of the target area when identifying and engaging a long distance target.  The eye-safe Laser Range Finder provides extremely accurate range measurements, providing the Protector first round hit on target capability.  The weapon station is fielded and combat proven with an excellent reliability record.  The elevation range from -20 to +75 degrees is very useable for combat operations in urban and mountainous terrain.  The rotation speed is 150 degrees per second.  The elevating angle is from -20 to +75 degrees, and elevation speed is 120 degrees a second.  Protector Lite is qualified for M240 (7.62mm) and M249 (5.56mm).

Protector Super Lite – the Man Portable RWS
The Protector Super Lite is designed as a lightweight, man portable weapon station that can be operated both remotely and manually.  It is highly accurate with first round on target and is adaptable to any wheeled, tracked or static platform, including tripods and has a high degree of commonality with the successful M151 Protector and the M153 Protector.