ABOVE: Business side of the Full Scale MPIMS

Area denial and protection has been a key factor in most combat missions from the beginning. For more than 50 years the product of choice for this mission has been the M18 Claymore mine and its derivatives. Extremely impactful at its onset, with 700 steel balls flying 1,200 meters per second, ground units were happy to have it in their arsenal. Over time though, especially as operations have focused more on precision engagement, our forces became very selective in its application. Though directional in theory, this is debatable. Ask any soldier where the nearest “safe zone” is when employing the system and they will tell you, “behind the closest hard object!” Slight upgrades have been made to the product since its inception like a plastic case and bi-lateral priming locations. Significant strides have been made in the past decade in regard to insensitive explosives and munitions, reliability of detonators, as well as other technology advances that have made it possible to develop a much more effective and safe product line. Enter the Multi-Purpose Infantry Munition System (MPIMS), a family of products developed and produced by OY Forcit AB of Hanko, Finland, that spans the full spectrum of applicable requirements.

Forcit Defense is one of the forerunners in Insensitive Munitions (IM) technology, manufacturing IM defense products with its own Plastic Bonded Explosives (PBX) product family. It is part of OY FORCIT AB – a Finnish based company that has explosive expertise since 1893. Forcit Defense has been developing and manufacturing innovative defense systems for armed forces globally since the 1920s. Since the early 1980s Forcit Defense has been serving western defense forces as well as International defense product
manufacturers with world class IM PBX products. The product range covers a wide variety ranging from special forces/combat engineering charges to underwater systems. 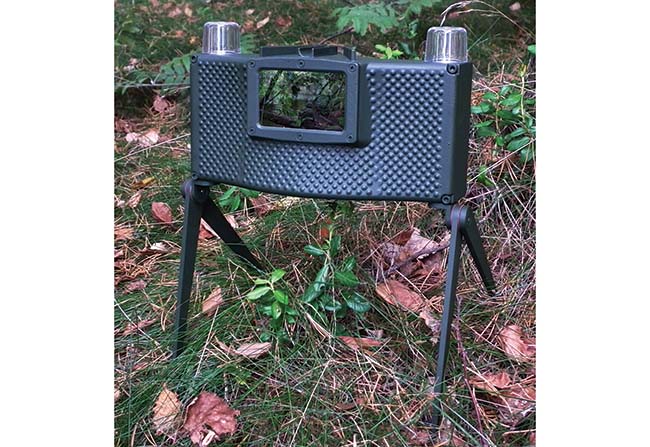 The family of MPIMS consists of a squad/platoon trainer, A MILES (Multiple Integrated Laser Engagement System) integrated Force on Force simulator, two less lethal systems, and two lethal Directed Fragmentation Charges (DFCs) that may contain either stainless steel ball bearings, tungsten ball bearings, or a combinations of both. The MPIMS takes the legacy system anti-personnel mine and transforms the idea into a system of munitions, exponentially increasing the soldier’s, sailor’s, marine’s or airman’s capability as well as increasing his safety and that of his unit and other friendly forces. The MPIMS family allows the operator to escalate the level of force needed at any given time on the battlefield. MPIMS has already proven itself in combat, being deployed to and used in Afghanistan, and has been selected by the NATO Industry Advisory Group (NIAG) as the “next generation defense system for area denial and protection.”

The SQD/PLT Trainer version of the MPIMS family meets the requirement for training and qualification on the system. The SQD/PLT trainer is a simple, low-cost training system that mimics the actual functioning of the MPIMS family, spanning from force on force trainer and less-lethal to full lethal versions. The trainer allows leaders and trainers to verify that soldiers are trained on the system, validate the correct employment and initiation of the system. Once the system is functioned correctly an audible and/or visual signal (depending on future maturation of the SQD/PLT trainer) is emitted, allowing the trainer to know that the soldier, sailor, marine or airman has employed the system correctly. 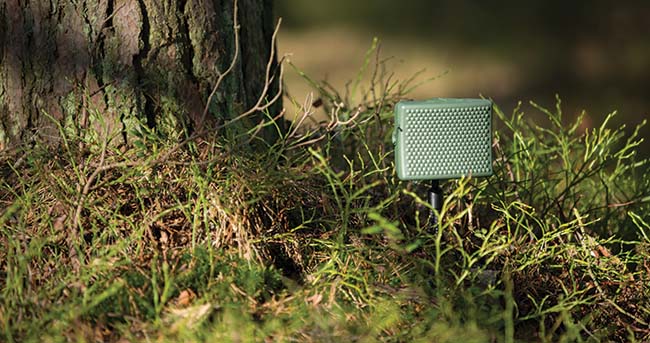 Until now, the Army has been unable to simulate the M18A1 in Force on Force training situations. With the addition of the capability of the FOFT, all military units will be able to simulate the effects of a directed fragmentation charge (anti-personnel munition effects) during force on force training. The FOFT upon initiation, emits a Class I “eye-safe” laser, transmits weapon ID and simulates wounded in action (WIA) or killed in action (KIA) based on personnel inside the kill zone. The “lethal” footprint in the “kill-zone” is approximately 60 degrees and extends to approximately 300 feet. The FOFT uses the same MILES/HITs equipment already standard issue at the National Training Center (Ft. Irwin, CA) and Joint Readiness Training Center (Ft. Polk, LA) in the United States and at the Joint Multi-National Readiness Center in Hoenfels, Germany. When fired, the FOFT presents both audio and visual effects and there is an interface for pyrotechnic devices such as the Improvised Explosive Device Effects Simulator (IEDES) fielded by the Program Manager for Live Training Systems (LTS) that is currently available and used at the Training Centers and some home stations locations. The FOFT uses a rechargeable 3.6 Li-Io battery and provides a minimum 200 hours of functionality. The FOFT has the capability of being sighted directionally to provide simulation fragmentation lethality over a specific area of 0 to 100 meters and a spread angle of 60 degrees. The simulator can adjust the range coverage based on varying vertical sighting by the operator on emplacement. The MPIMS FOFT comes with a realistic firing device and is manually detonated. Soldiers can now train as they fight using the FOFT to simulate ground combat utilizing an anti-personnel munition.

The Less-Lethal / Non-Lethal (LL/NL) variant is the variant where the most growth potential exists in the MPIMS family. The vision is to use the FOFT body and develop a “plug and play” system, where by modules containing kinetic and non-kinetic payloads that can be used to engage threats at different ranges and with graduated or “scalable” effects. The payloads that are envisioned in the non-lethal realm are forms of lights or “dazzlers” at varying strengths, spot lights, sirens, and loud speakers with pre-recorded messages based on the threat level. The payloads envisioned for the Less-lethal MPIMs are sting balls and flash bangs. It is important to note that the LL/NL is the least developed munition in the MPIMs family, but has the greatest area for growth. The objective of the LL/NL family is to develop the “plug and play” system that will be able to accept lethal, non-lethal, and less lethal modules, depending on the threat identified in the area of operations. 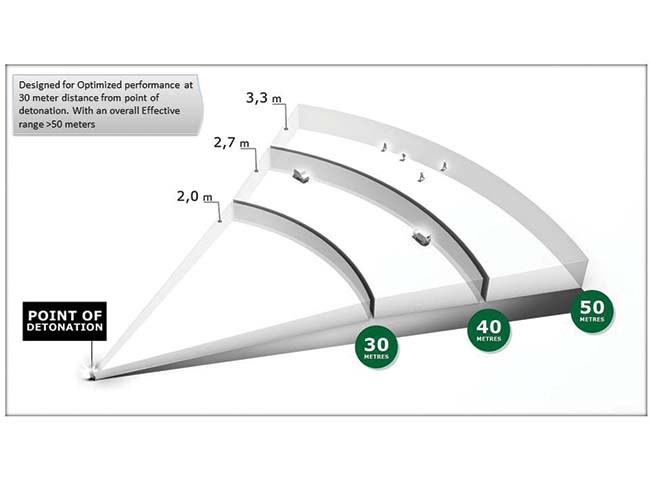 The Directed Fragmentation Charge MPIMS (anti-personnel configuration) allows the operator the capability to engage more efficiently and with a larger area than any present legacy devices. DFC can be used as part of base camp protection with other MPIMS applications (less-lethal and anti-vehicular configurations) to provide the response required by the force to meet threat escalation. The DFC (anti-vehicular) application uses tungsten ball bearings and penetrates up to 4 millimeters of Rolled Homogeneous Armor (RHA) at 80 Meters at P/100 (penetrates every time at 80 Meters). The DFC’s lethal zone is over twice as large as the M18A1 Claymore. The DFC can be used in ambush, static defense, base camp force protection, force multiplier and area access control scenarios. It can be employed offensively and/or defensively. The DFC MPIM is a fully
mature product, combat proven in Afghanistan by NATO forces, using MPIMs under Directed Fragmentation Charge (DFC) nomenclature. The DFC has been in full rat production since 2009. The DFC is at a TRL 9 and is a COTs product. A single DFC has 924 stainless steel pellets, which have an initial velocity of over 2,700 m/s in detonation. The DFC has been optimized for a 50 meter wide – 2 meter high “impact zone” at a distance of 50 meters based on the distribution pattern that ensures 5-7 “hits” per square meter. DFC can be effectively used against non-armored or light-armored vehicles up to 50 meters, and personnel beyond 100 meters. The defined fragmentation pattern greatly increases operator safety as no fragments are found left or right of the pattern. It could be called a “precision” fragmentation charge due to this attribute and could safely enable friendly force movement forward of the device, something that does not exist presently. In addition, there are no fragments that “fly” rearward from the device due to the booster to main charge firing train, which has been captured in numerous arena tests. The repeatable distribution pattern significantly reduces collateral damage.

M-MPIM is a ~40% scaled variant of the original Directed Fragmentation Charge (DFC) and is based on a design developed for a special operations requirement, but has application for all ground forces, including mounted troops. It is extremely light, and highly effective. It can be used in hit-and-run, ambush, base camp protection, force multiplier, and area access control scenarios. It can be employed offensively and/or defensively. It can be combined with other M-MPIMs to expand the coverage area or turned on its side for narrower coverage in urban scenarios. It is truly a versatile weapon that can be incorporated into existing perimeter defense systems such as the XM-7 Spider anti-personnel networked munitions system. There is no other munition that equals the performance of the Mini MPIM. In detonation, M-MPIM sends out 315 spherical steel fragments with a muzzle velocity of 2,300 meters per second in a repeatable fragmentation pattern. The M-MPIM has been optimized for a 20 meter wide – 2 meter high “impact zone” at a distance of 30 meters based on the distribution pattern that ensures 5-7 “hits” per square meter. The steel or tungsten projectiles remain effective to more than 100 meters against a man target. As with the DFC, this defined fragmentation pattern greatly increases operator safety and operational effectiveness. All lethal MPIMS have a rearward safety zone of 7m, based on concussive effects. This in itself is a dramatic change compared to the legacy system. An excerpt from the Army Field Manual (FM 23-23) that applies to the M18A1 states: “Danger Area of Backblast and Secondary Missiles. Within an area of 16 meters to the rear and sides of the mine, backblast can cause injury by concussion (ruptured eardrums) and create a secondary missile hazard. Friendly troops are prohibited to the rear and sides of the mine within a radius of 16 meters. The minimum safe operating distance from the mine is 16 meters. At this distance, and regardless of how the mine is employed, the operator should be in a foxhole, behind cover, or lying prone in a depression. The operator and all friendly troops within 100 meters of the mine must take cover to prevent being injured by flying secondary objects such as sticks, stones, and pebbles.” 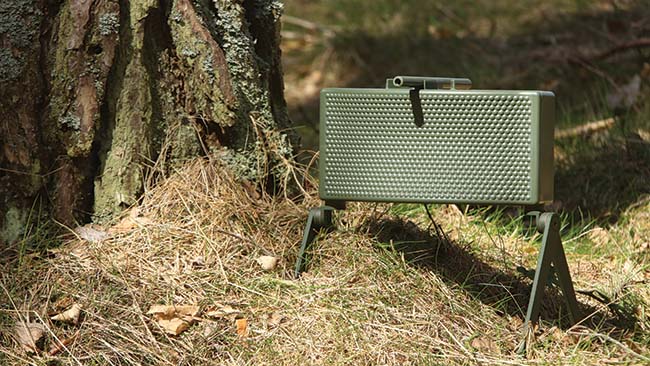 Warfare Experiment (AEWE) Spiral J Live Fire where soldiers and marines present witnessed the effects from an “open” (unobstructed) distance “significantly less” than they would for the legacy device. The M-MPIM’s repeatable fragmentation pattern significantly reduces the possibility of collateral damage. Using the existing aiming device on the device proved highly effective during the AEWE demonstrations and there are discussions ongoing about incorporating a miniature laser aiming device that shows the impact zone. The Mini MPIM was granted a “Safety Release” (SR) by the Army Test and Evaluation Command for the AEWE live fire event. All lethal variants of the MPIM are the only Insensitive Munition (IM) compliant fragmentation charges available today. The M-MPIM is a basic device that stands ready to incorporate whatever accessories the war-fighter should desire, from stands to mounts to male-female attachment points for linking multiple devices together. A comparison of the Mini-MPIM vs the legacy system is below.

The Multi-Purpose Infantry Munition System family gives the United States Military (and other foreign militaries) the capability to train and engage with an escalation of force needed at a specific time, in both offensive and defensive scenarios. The SQD/PLT trainer provides a realistic training device that replicates the MPIMs in every way. The MPIMS Force on Force Trainer (FOFT) provides a force on force training capability that until today, has not existed in the Military Training Centers. The Less Lethal and Non- Lethal MPIMs versions will provide a scalable, selectable, “plug and play” capability that can be tailored based on war-fighter requirements. Finally, the lethal versions provide a vast array of options, from large DFC with Tungsten or stainless steel ball bearings, to the Mini MPIM, that provide state of the art technology and unprecedented performance. 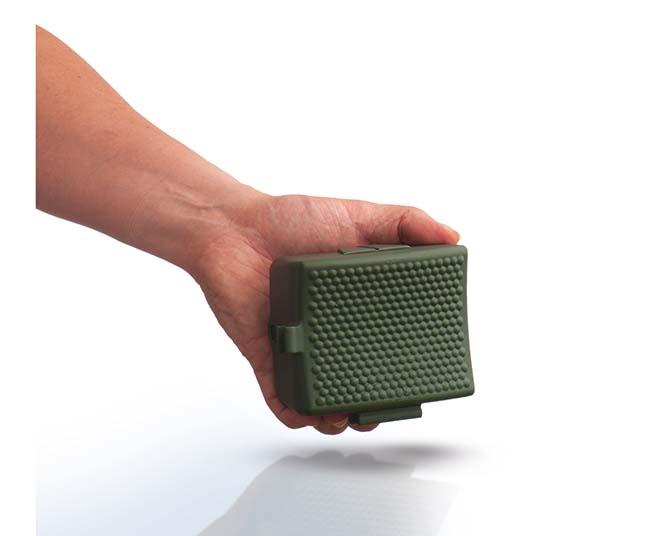