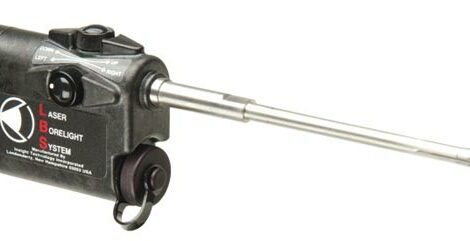 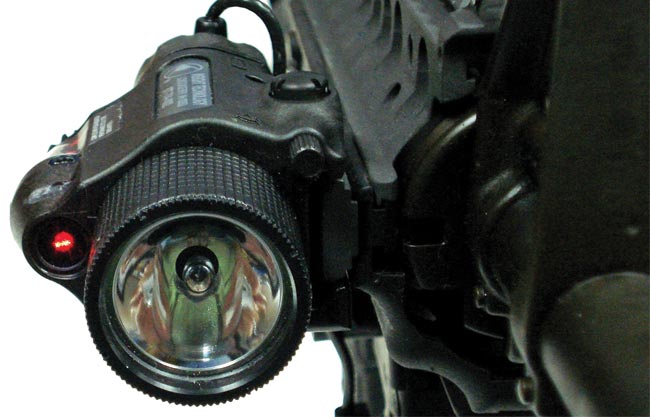 The face view of the M6X Tactical Illuminator. Shown is the illumination light with the laser off to the side.

Throughout the years, flashlights were considered a separate entity from firearms – something to be held in the other hand.  Around the time U.S. military personnel entered combat operations in Somalia, troops began to realize it would be advantageous to have the flashlights mounted to the rifle to keep the other hand free to reload the weapon, clear malfunctions or whatever else might need be done.  So, troops began to tape small flashlights to the handguards of their weapons.  Two specific needs were shown at this point.  One was a method to mount accessories to the rifle with some type of rail system.  The other was a secure way to mount a flashlight amongst other accessories to the rifle.  The first inspired A.R.M.S., Inc. to develop their Rigid Frame System (later evolved into the SIR) and C. Reed Knight, Jr. to introduce his first RIS (Rail Interface System) and later RAS (Rail Adapter System).  With the final standardization of the Swan/Mil-Std-1913 rail and the then RIS system, now flashlights could be easily mounted to the handguards of the M16/M4 series of weapons.

In 1988, Insight was founded in a basement workshop.  Early products were rail mounted lasers and illuminators.  One of the first prestigious contracts for Insight Tech-Gear would come from a revolutionary program of the newly developed United States Special Operations Command.

Illumination 101
There are many applications for illumination in a tactical situation.  It may be for illuminating an entire room, outdoor use where higher brightness is needed, or perhaps infrared for covert use.  The most common form of light is incandescent.  This consists of a bulb utilizing a filament.  There are several variations of this type of bulb that make it brighter and have more life.  Filament is fairly cheap making it easy to maintain. The filaments used with Xenon gas is somewhat less expensive than the LED (to be discussed later).  The tint offered off of a filament bulb has a yellow-orangeish color to it making it a little friendlier for identifying features of a person at a quick glance.  Probably the most serious downfall to the bulb is that when this type of power is utilized (70+ Lumens), the bulbs burn pretty hot – enough that if accidentally left on in a nylon bag, it could melt the nylon.

The other and growing popular illumination option is called LED or Light Emitting Diode.  This technology became widely available in the late 1990s.  This technology, although slightly more expensive, offers major benefits.  The diode is much more durable with a life of 50 to 100,000 hours and the LED components are difficult to damage with external shock.  LED has overtaken the efficiency standard of incandescent lighting systems.  LEDs produce more light per watt than incandescent bulbs.  The battery life is slightly better than the incandescent bulb and does not get anywhere near as hot.  Due to these factors, it is not necessary to have back-up bulbs on hand.  The LED has one minor trade off.  They are more sensitive to malfunction under extreme ambient temperatures.  There must be a proper heat-sink to maintain operating temperatures.  The light from the LED is a bluish color.  The bluish color can hide features of a person’s face as well as color of skin identification at a quick glance.  Colors in general may be perceived differently with LED illumination that would not be altered with sunlight or incandescent illumination.  However another incredibly useful use for the LED is target disorientation.  When configured to do so, the LED can function in a strobing manner which when aimed at a target will disorient them and often will give just enough time to subdue the target before they can get their eyes refocused to do harm.

The H3X Regulus tactical LED light. This is a high powered LED light that gives continuous illumination or strobe at the user’s discretion. It is powered by three Duracell 123 3v batteries.

Insight Tech Gear Flashlights and Tactical Lights
Insight Tech Gear offers both incandescent as well as LED flashlights and tactical lights.  Many models are manufactured of aluminum and are hard coat anodized for tough handling in all sorts of weather.  Insight offers some different hand held LED flashlights.  The H1X Proxima uses one Duracell Ultra (123) lithium battery with an LED output of 80 Lumens.  This light is compact and could easily fit on one’s pocket or on a utility belt.  The sample light put out an incredible amount of light for such a small package.  The Proxima has settings for constant light, momentary as well as strobe capabilities.  The H2X Arcturus is a rechargeable LED light.  The H2X has an LED output of 120+ Lumens and the H3X Regulus has an astonishing 160+ Lumens of output.  This model utilizes three Duracell Ultra (123) lithium batteries.  All models have an activation button in the rear that activates and selects momentary, constant, strobe and dim settings.  The LED flashlight provided for test and evaluation was the H3X Regulus.  This LED flashlight can be held as a flashlight or placed on a mount and mounted to a rifle or any other type of long arm.  There is a pressure activated button on the rear for moment or continuous illumination.  The Regulus has settings for strobe, momentary, lock-out and continuous use of illumination.  The LED output is 200+ Lumens of light and is powered by two 123 6volt batteries.  The run time for the batteries is approximately 90 minutes on high power versus 400 hours on low power.  The case of the light is made from aluminum alloy and is hard coat anodized to a black, tan or olive drab finish.

Additionally, the XTI Procyon is a module which will attach to the rail of a pistol or long arm which puts the LED into a tactical light.  This gives a minimum LED output of 125 Lumens.  A toggle switch on the rear allows the LED to perform in constant, momentary and strobe modes.  There is a significant tactical application to the strobing features whether it be a LED in a flashlight configuration or weapons mounted.  The strobing LED light will disorient a suspect for up to 2 seconds.  This could take the place of a flashbang grenade (which serves the same purpose but on a much larger scale) under many entry circumstances.  When taking a hostile suspect into custody, the strobing light could disorient them long enough to get them in cuffs and stop them from being a threat without the use of pepper spray or deadly physical force.  The body is hard coat anodized aluminum for added strength.  The rail interface is adjustable to fit any of the currently produced Mil-Std 1913 rails.  The sample light was placed on a .45 Auto caliber Beretta Px4 pistol.

Insight has a host of various incandescent illumination lights.  The M3 and M3X have a peak output of 90 and 125 Lumens respectively and can be attached to either a handgun or a long arm.  This is as simple as switching the back plate.  Pistol will utilize toggle steady-on or a contoured pistol remote back plate.  For use with a long arm, a long gun back plate is used which has mode switch with three positions (off, mom and on).  A pressure pad is plugged into the rear of the back plate. 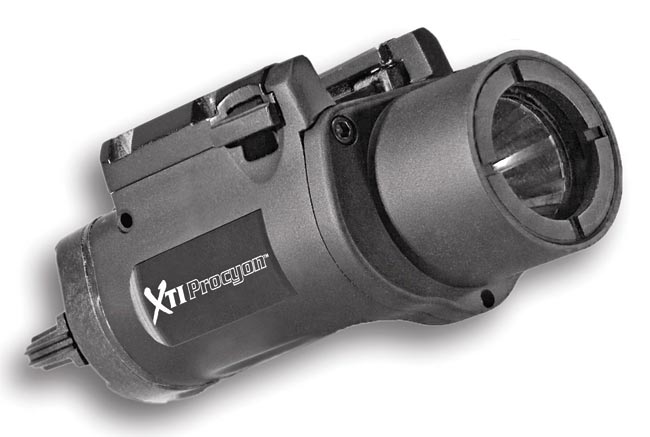 The XT1 Procyon Tactical LED is mounted to the rail (Mil-Std 1913) of most any pistol on the market. The T&E unit was mounted to a Beretta Px4 Storm .45 Auto caliber pistol. This unit enables an officer to use either constant LED illumination or strobeing to disorient a suspect to safely take into custody.

The X2/X2L Series Xenon tactical light is designed to be installed on rails of sub compact pistols.  The activation switch is a toggle style and is powered by a single CR2 3 volt battery.  The peak output is 40+ Lumens.

The M2 UTL (Universal Tactical Light) was designed for H&K for use with their USP pistol.  This mount is designed specifically for the USP pistol and utilizes two 123 6-volt batteries for a peak output of 90+ Lumens.  This was the first rail-mounted tactical light in the industry that offered blinding illumination which was actuated by a single finger and was rail mounted and installed without tools.

The vast majority of the Insight Tech-Gear’s LE/military lines of lights are tactical lights.  This means the lights are designed to be mounted on the firearm.  There are models specifically for mounting the lights on handguns as well as ones which will mount on any Mil-Std 1913 rail.