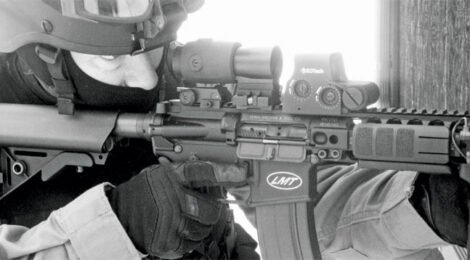 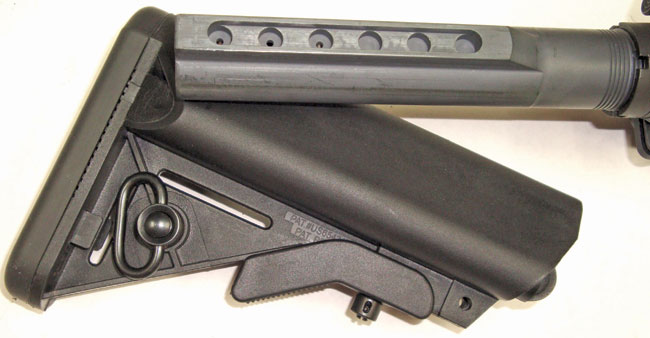 The receiver extension used has six positions rather than the Mil-Spec four positions. Notice the removable sling swivel.

LMT Piston Operated MRP
The industry has gone through a piston craze over the last few years.  Although there is no statistical data proving the superiority of piston operation over direct impingement, there has been a market for piston operated weapons in the AR-platform.  When asked why LMT began producing piston operated rifles, Karl Lewis simply said “customer demand.”  Good enough of an answer.

The versatility of the MRP made it the ideal platform for the piston operated LMT offering.  The piston is part of the barrel assembly.  The gas block on the barrel has been altered to accept the end cap, piston, operating rod and spring.  It is held together as an assembly so the assembly is inserted into the MRP and locked down with the two bolts.  The one-piece bolt carrier was modified too for use with the piston.  The impact area (key area) of the carrier is machined into the bolt carrier giving strength and durability to the carrier.  All the gas relief ports have been eliminated.  Skis have been added to the bottom of the rear of the carrier to prevent carrier tilt caused by the off-center movement caused by the impact of the operating rod on the bolt carrier.  To remove the piston assembly from the barrel, depress the detent and rotate the end cap and pull outward.  Now the operating rod and spring can be removed for maintenance.  The piston operated system requires the use of the heavier H2 buffer (two tungsten weights and one steel weight).  The MRP piston barrels are offered in both 5.56mm as well as 6.8mm Rem SPC.

Provided for testing was both the 16 inch as well as the 12 inch CQB barrel.  More than 300 rounds of Silver State Armory 5.56mm 55gr FMJ ammunition was fired with no malfunctions.  More than half of that was fired on fully automatic utilizing a Colt M4 lower receiver.  Slightly more recoil and muzzle flip was noticed with the piston operated system

Converting the MRP to Fire 6.8mm Rem SPC
The absolute finest innovation of the MRP is its easy ability to convert to fire a different cartridge.  LMT currently makes barrels in 5.56mm and 6.8mm Rem SPC.  LMT has also tested calibers in 6.5 Grendal, 5.54x39mm and 7.62x39mm.  Provided with the MRP test rifle was the barrel and bolt to convert the rifle to fire the 6.8mm Rem SPC cartridge.  The 5.56mm barrel was unbolted and pulled out of the MRP and the 6.8mm barrel put in its place and the bolts torqued down to 140 inch pounds.  The bolt was removed from the bolt carrier and replaced with an enhanced bolt chambered for the 6.8mm Rem SPC cartridge.  LMT provided four Precision Reflex, Inc. 25-round magazines.  Also provided by C Products were five of their steel 25-round magazines. 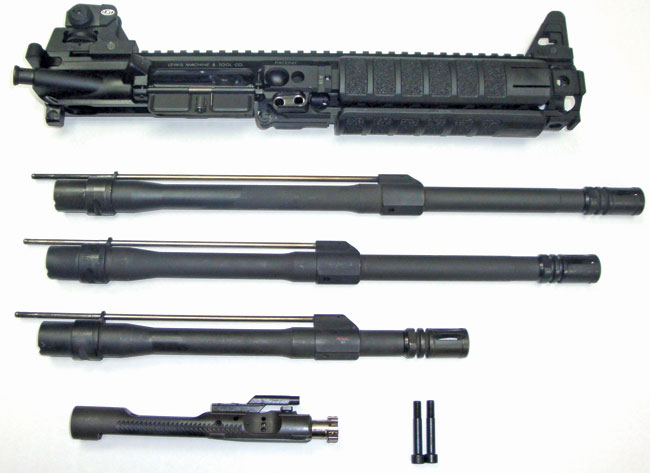 The modularity of the MRP allows the weapon to be custom tailored for the mission. The MRP (top) with the 16, 14.5 and 12.5 inch barrel assemblies. These are all direct gas barrel assemblies but they could just as well be piston operated or even 6.8mm SPC caliber.

The first 300 rounds fired were SSA 110 grain Nosler Accu Bond cartridges.  No malfunctions were encountered.  With this ammunition, the groups at 100 yards remained at 1.25 inches off of a bench.  For accuracy, the SSA 115 grain Sierra OTM Match rounds were used.  Groups measured at a consistent 1 MOA.  Recoil was noticeably more than the 5.56mm but not enough to mention firing on semiautomatic.  SSA also manufactures an armor piercing round in 6.8mm Rem SPC.  It consists of a pointed carbide core with a machined brass sabot offering an incredible barrier penetration.  It penetrates with ease a 1/2-inch thick Mil-A-12560 class 1 armor plate out of a 16 inch barrel at 100 meters at a velocity of 2,800 feet per second.

In research into weapons chambered for the 6.8mm Rem SPC it was noticed there are two different chambers.  They are referred to as the spec 1 and type 2 chambers.  The spec 1 chamber is the one which has a SAAMI specification and has a .050 freebore.  The spec 2 chamber has .100 freebore, which permits longer projectiles (better ballistic coefficient).  Additionally, the longer freebore decreases pressure 4-5,000 psi.  With a 115 grain projectile, a spec 1 chamber will give 2,425 feet per second and a spec 2 chamber will give a higher 2,575 feet per second.  As of this writing a significant number of manufacturers are making their 6.8mm Rem SPC barrels with the spec 2 chamber; however, some remain with the SAAMI spec chamber.  This is due to the standardization in chamber drawings.  There is a rumor going around that a new chamber specification, which is the spec 2 chamber will be introduced to SAAMI as the 6.8x43mm.  As of this writing, only Silver State Armory and one loading in Hornady TAP line is loaded to the spec 2 pressures.  Silver State Armory loads both commercial and spec 2 loads.  Before shooting spec 2 ammunition in your rifle, consult the rifle manufacturer to determine which chamber your rifle has.

The Lewis Machine and Tool MRP is truly in a category of its own and is the benchmark for the modularity of the M16/M4 weapon system: one receiver, multi-caliber barrels and available in both direct gas as well as piston operated.  More caliber offerings are most certainly on the horizon.  With all the barrel lengths and calibers offered, the MRP will do just about any job required of it.  Whether it is a CQB environment with the 10.5 inch barrel or hunting medium game with the 6.8mm Rem SPC, this one size does fit all.  Selective fire versions of the MRP are available to both law enforcement as well as military customers.  With the proper tax stamp and compatible state laws, short barreled versions of the MRP can be had by the general shooting community.  LMT has been a forerunner in new developments and innovation, which will bring the M16/M4 well into the new decade and beyond.