There have been a number of attempts in the last decade to integrate all of the possible futuristic ideas for the modern “Battlespace.” Most are flights of fancy, many are rejected by end users as too complex to use under stress, and more are restrictive in their use. All, however, have had an effect on the evolution of the entity that is the combat team. Colt Canada has been working hard on this “Future soldier” or “Future sniper” system for quite a while. They’ve now gotten it pretty well nailed.

After meeting with Bruce Gilchrist from Colt Canada during the Eurosatory exhibition this year, and viewing the SWORD in action during the Shrivenham Small Arms Symposia, this author is impressed.

Colt’s Manufacturing and Colt Canada have streamlined the future warrior concept to a point where it’s ready for theater.

The point of the SWORD is that it is a cohesive system- the spotter and the sniper become very close in communicating, enabling a very fast positive identification of a target along with engaging it. Spotter and sniper can be in different locations and double check each other for identification of target. SWORD also allows an almost instantaneous communication with command centers across the world- this is a truly valuable tool in today’s combat environment. 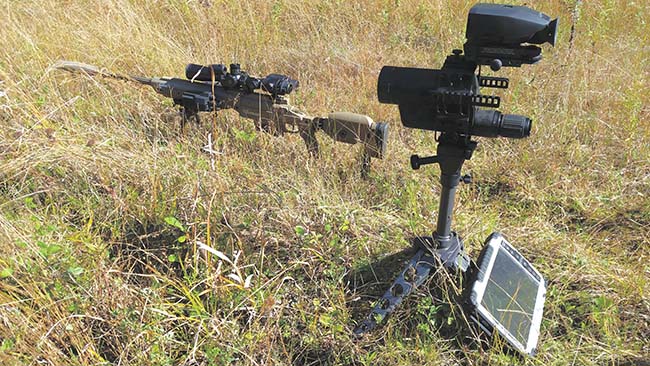 To quote from Colt Canada’s literature:

The SWORD Sniper System combines the Weapon Operator and Spotter functions of a Sniper Team and enables a high fidelity digital link between the Weapon Operator and Spotter that increases the assurance of a target engagement and reduces the time elapsed to identify and engage a target. With a SWORD Enable Sniper Team, both the weapon and spotter navigation and optical sensor data can be interfaced to the combat network for a greater situational awareness picture at higher command echelons. 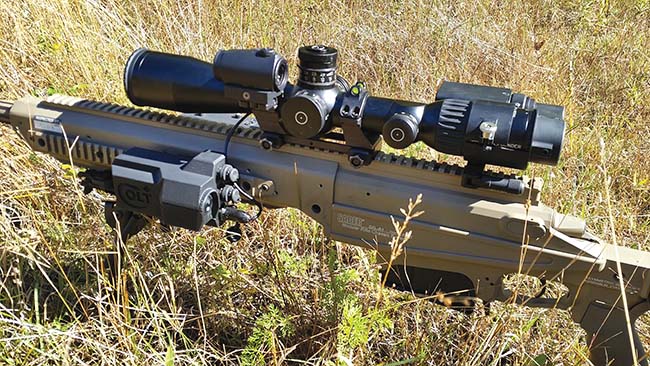 As a Sniper Team, the Spotter would identify the target and create the mensurated target that includes the target image.

The target is then digitally passed to the Weapon Operator where the weapon operator aligns the weapon angle and range to the target position and compares the received target image to the image seen in the weapon scope.

When target and weapon scope image are confirmed by the Spotter, the Weapon Operator is released to fire the weapon.

Both Spotter and Weapon Scope images can be pushed to higher command echelons if the target characteristics warrant it.

SWORD Systems are network and weapon agnostic. A SWORD System is integrated on to a weapon to operate with that weapon’s specific characteristics. The SWORD Systems use of open architecture communication standards ensures that a SWORD enabled weapon, readily integrates into any communications network. SWORD utilizes real-time range cards that can be shared and distributed within the military command structure communications network. The real-time range cards create a shared situational awareness that increases lethality and decreases engagement times through the removal of target ambiguity.

Drone views can be added in the tablets, creating a three dimensional aspect of the terrain. Many other types of information can be added as well, depending on the complexity of the mission. Weapon Cant, bullet compensation, environmental factors can all be quickly added into the sniper’s calculations.

From the demonstrations that SADJ received during the shows, the SWORD system is ready for prime time.