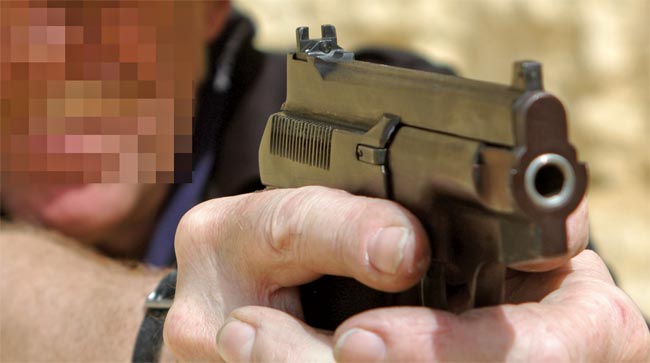 In this report, a mixture of English and metric parameters are used. All linear and circular dimensions are metric (millimeters). All weights are grains simply because the convention we use are to weigh bullets and powder in grains. Velocities are English and in feet/second because those are the units of our chronograph. Sound levels are decibels (reference zero dB as 20 micropascals). Temperatures are dual units (F/C) and barometric pressure is in millimeters of mercury.

PSS Pistol
This finely crafted semiautomatic handgun is a magazine-fed weapon utilizing a single stack magazine that holds 6 rounds and a last-round slide hold-open device. The pistol is well finished, and all parts carry the pistol’s serial number. With the finish and serialization of all parts, it appears that during factory assembly on all examples seen by this author, all parts were hand fitted. It is issued with a brief instruction manual (in Russian) and a somewhat flimsy tan leather shoulder holster.

The PSS and its specialty SP-4 ammunition were specifically designed for elimination of live targets without risking discovery of the operator. Unlike predecessor captive piston handguns, the PSS is capable of semiautomatic fire. Although there is a definite advantage to rapid follow-up shots, the disadvantage for the covert operator is that it ejects (and leaves) spent cases at the scene. These spent cases are exceptionally distinctive, and almost anyone with an even passing familiarity with this weapon will be able to identify its use from the spent cases.

The author has just fired the PSS, and the slide has locked back on an empty magazine. (Photo by Dan Shea)

It is not obvious where either the PSS pistol or its SP-4 ammunition is manufactured, but other clandestine special purpose weapons have been built at Tula Arsenal, and it is suspected that Tula may well be the origin of the PSS. The weapon carries absolutely no markings other than a low four digit serial number. The PSS was developed for special personnel of the Soviet KGB and for elite elements of the Spetsnaz of the Soviet Army and was introduced around 1983. It is currently used by many elite Russian anti-terrorist teams. It is far more compact and has a quieter action than the more common Soviet PB (silenced Makarov) and Chinese Type 67 silenced pistols.

While the PSS resembles a somewhat large conventional blowback pistol, it is definitely unique. It will accept no ammunition other than the SP-4 silent cartridge. Other than the ammunition used, the most obvious is it has a two-part barrel. The separate distal rifled part is fixed to the frame. The breech portion (consisting of the chamber) is allowed to recoil inside the frame for a short length against its own return spring. This increases the mass of the moving parts at the initial stages of recoil, and also slows the slide on its final stages of movement, resulting in dampening the sound of the slide hitting the stop on the end of the recoil cycle.  The slide return main spring is housed in the slide, above the barrel, and the spring guide rod is part of the slide retaining assembly. The PSS firing mechanism is single/double action with open hammer and slide-mounted safety/decocker of conventional Makarov design. Sights are fixed.

We were granted the opportunity to extensively examine (including total disassembly), photograph, and fire the PSS at a discrete Southwest Asian military arsenal. To the best of our knowledge, there are no examples of this weapon in the United States at the time of writing. There are known to be several examples in the United Kingdom. Distribution through the former Soviet satellite countries is unknown but presumed to have been issued to clandestine units in these countries. Total production is unknown. 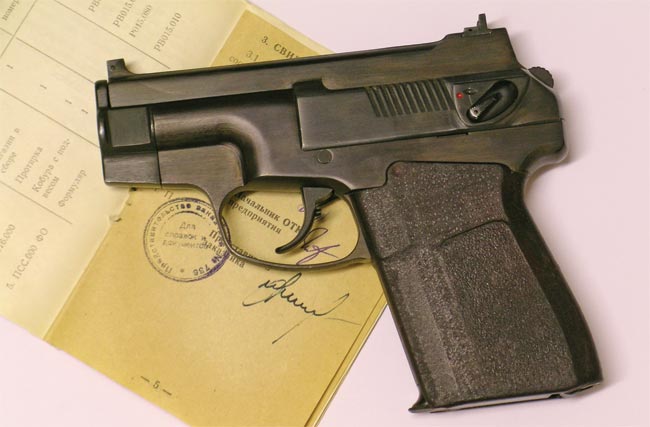 Because all products of combustion are contained within the spent cartridge, there is no powder fouling or possibility of corrosion from powder residues. Interestingly, this also means that the operator’s hands will not be contaminated with powder residues, which may be of interest in the forensic community. Maintenance consists simply of light oiling of the weapon and wiping the external surfaces with an oily rag.

We do not have available to us at this time a factory breakdown of parts. Because of this, the names we use are based on apparent function and similarity to parts in more conventional pistols. Field stripping for basic cleaning and lubrication can be accomplished with no tools other than a section of cleaning rod. Before starting, the magazine must be removed and the hammer cocked. Although not photo detailed, the accompanying pictures show a slot cut in the front assembly locking piece, which also appears to function as the slide stop. This engages a cut in the front of the recoil spring, limiting rearward motion of the slide. To field strip, a section of cleaning rod is inserted into the recess in the top rear portion of the slide, and the recoil spring guide rod is pushed forward until the locking piece/slide stop clears the front end of the barrel. At this point, the locking piece can be slid upward to disengage from the front of the recoil spring guide rod. The slide then removes to the rear, but the forward end of the slide must be disengaged upward from the rear of the floating chamber, before it can be fully removed. Re-assembly is the reverse.

While we completely disassembled the PSS, we can most definitely recommend that the user never do more than simply field-strip the weapon for maintenance. Total disassembly is quite difficult and is by no means intuitive. It is also totally unnecessary. Re-assembly is even more difficult. We speak from experience. 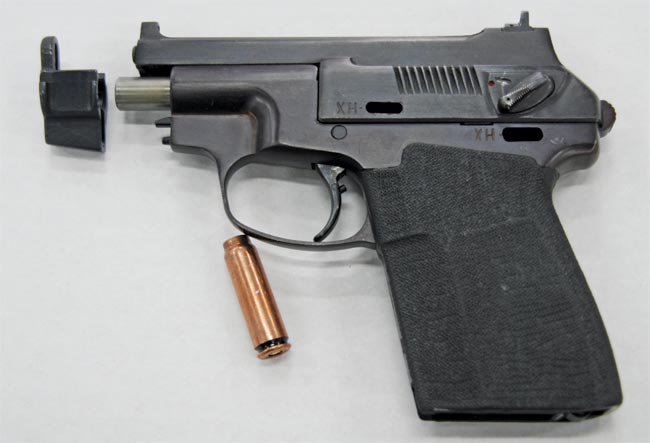 The front assembly locking-piece/slide-stop has been removed from the barrel and the groove in the front of the recoil spring guide rod. This is the first step in field stripping. At this point, the slide can be removed to the rear. (Photo by author)

SP-4 Ammunition
Captive piston ammunition is a unique, special-purpose cartridge that is designed to be intrinsically quiet as compared to conventional ammunition. Essentially, the SP-4 silent cartridge consists of a reinforced steel cartridge case containing a small powder charge enclosed in a cup-like piston in the rear of the case. This piston rests against the base of the projectile; a cylindrical bullet made of mild steel and fitted with a brass driving band at the front. The SP-4 cartridge was adopted by the Soviet KGB and Spetsnaz units in 1983 along with the PSS host pistol.

The ammunition is issued in plain white boxes of twelve cartridges each. The only markings on the box are what appear to be a lot number. This is enough to charge both magazines. There are 20 boxes in a hermetically sealed SPAM tin and two tins in a wooden crate. The tins are marked with the cartridge designation, lot number (that correlates with the number on the boxes), and some other markings of unknown meaning.

Many prior designs, such as the SP-3 and PZAM silent cartridges, utilized 2-part (or 2-stage) piston that extended beyond the end of the cartridge case. While this permitted greater acceleration of the projectile, it also was incompatible with cycling in a semiautomatic host weapon. These older silent cartridges from the late 1970s and early 1980s utilized the standard 7.62mm M43 projectile loaded in the AK 7.62×39 rifle cartridge.

When fired, the primer ignites the powder charge, and the rapidly expanding gases drive the piston forward at a high acceleration. The piston, in return, drives the projectile. When the driving piston reaches a shoulder at the end of the case, the piston is somewhat violently stopped by a shoulder on the front of the cartridge case. Having been accelerated, the projectile engages rifling in the short barrel and exits the weapon toward its target. The high pressure propelling gases are contained (and trapped) in the spent cartridge and gradually leak out over a period of several weeks. Because the propelling gases are not released into the atmosphere, there is very little sound generated.