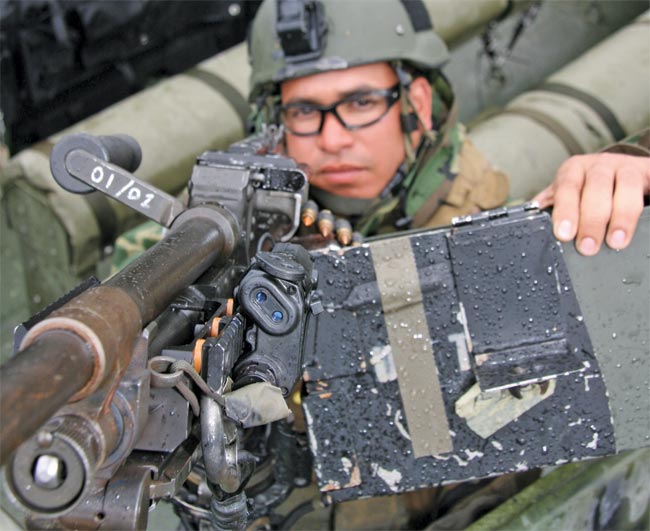 SADJ:  Your Detachment has three RPBs (Riverine Patrol Boats) with three weapon stations and one RAB (Riverine Assault Boat) with five weapon stations.  Comment on each of the Crew Served Weapons on the boats, starting with the M240’s reliability and suitability for most missions.

Sanchez:  If you take care of it, it will take care of you.  It’s a great weapon you can be as surgical with it as you want with it depending on the proficiency of the gunner.  Absolutely reliable.

Lopez:  The 240 is very accurate and it’s like a workhorse.  You can take it on shore when we have to provide security on ground for our RSTs so it serves two roles on the boat.

SADJ:  You have experience with the M60, how about a comparison?

Sanchez:  The 60 is more of a land based assault weapon but the 240 is a better mounted 7.62mm machine gun.

Lopez:  My experience with the M60, I mostly shot it off of ships and on a couple of ranges on shore.  I like the 240 better, once I shoot it I’m on target and it’s surgical.

SADJ:  What needs improvement with the M240?

Sanchez:  It’s been around forever for a reason.  It’s a good gun if you need a hard target taken out, that’s why we have it on board.  Longer range, heavier bullet, greater penetration.  If you take care of it, it will take care of you.  As long as you do those inspections, make sure none of those parts are worn too much – the normal inspection process – it’s a good gun as well.

Lopez:  The amount of fifty caliber lead it puts down, it’s definitely something I would want on my boats at all time.  Great against hard targets and when it goes off they know you got a fifty cal. – everybody can hear you out there. 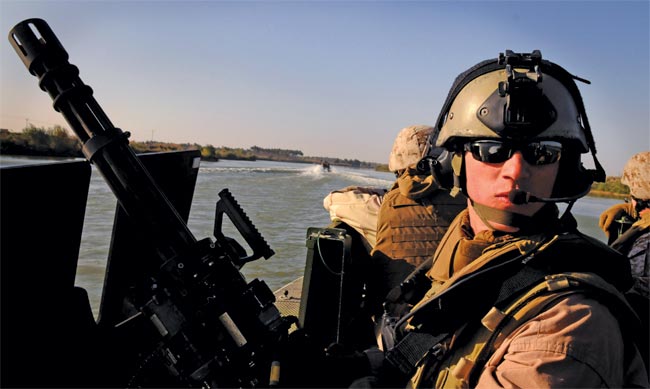 SADJ:  Is headspace and timing tricky for the younger sailors?

Sanchez:  With the training we’ve had its been pounded into their heads.  We’ve never had any issues.  Just part of settin’ up the gun.

Lopez:  Just second nature so they get on their gun and know they have to do it.

SADJ:  Any recommendations for improvements to the M2HB?  Maybe a quick-change barrel?

Sanchez:  I’ve heard about it but it’s not needed.  If you lay enough rounds downrange on target hopefully that target’s down before you need to do a barrel change.

Lopez:  It’s been around so long that pretty much all the improvements have been already done on it.  I’m happy with it personally; I don’t have any issues with it.

Sanchez:  That’s a serious weapon as well.  We’ve got the Mod 3 and it’s a good gun.  We haven’t used it as much as we would have liked because the ammunition is a little hard to come by.  But all the guys have the training needed to use the weapon properly.  Some people are kinda skittish about it – it’s a very violent weapon – blowback operated with a very heavy bolt.

Lopez:  I love that weapon.  Ammo is harder to come by so shooting it – range time – is limited; but like all the other weapons, the guys have had training on it.

SADJ:  Is the MK 19 not usually mounted on the boats?

Sanchez:  On our heavy mount (at the stern) we normally use the 50 cal.  It’s more accurate and causes less collateral damage. 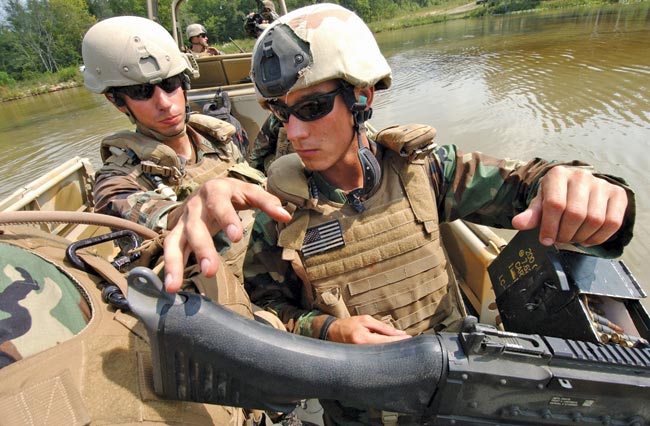 SADJ:  What would be the kind of mission you would need the MK 19 for?

Lopez:  It depends on the threat assessment for the area of operations.

(The Detachment’s OIC has been silently observing the interview and now speaks up).

Ashley:  Like the chief said, its mission dependent.  If we were going to do a fire support mission we would take it out.  Sometimes at least one of the four boats will have it mounted.

SADJ:  So your boats would be providing a kind of Naval Gunfire Support?

Ashley:  I guess that’s one way of putting it.  It all depends on what kind of environment we’re operating in.  Unless it’s a “permissive environment” (few civilians, more open space) we tend to scale back on the MK19.

Sanchez:  I’m a believer in it now.  Originally not so much – probably because of lack of knowledge.  Now that I’ve been through more training it’s definitely one of my favorite weapons.

Lopez:  Some experience shooting it from ships but obviously totally different from this type of environment on boats.  The only problems I had back then was with the batteries and battery chargers.  Here we’re running them right off the electrical circuits (24 volt DC) on the boat.  The weapon system itself is impressive – 3,000 rounds per minute.  When you engage something or someone with that you’re gonna scare ‘em (smiles).  Especially when you have four of them on board, one on each boat, going off at one time.

SADJ:  Have you been in a situation where you’ve needed that high volume of firepower?

Sanchez:  I haven’t been in that situation but that’s what we’re training for right now.  It’s one of those things that’s nice to have when you need it.

Lopez:  Nothing at all.  Very reliable.

Sanchez: The improvements have been made now that we’re using the Dillon Aero feeder-delinker.  I guess there were some issues before but we personally haven’t had any.  It shoots fine for us and we’ve put plenty of rounds through it. 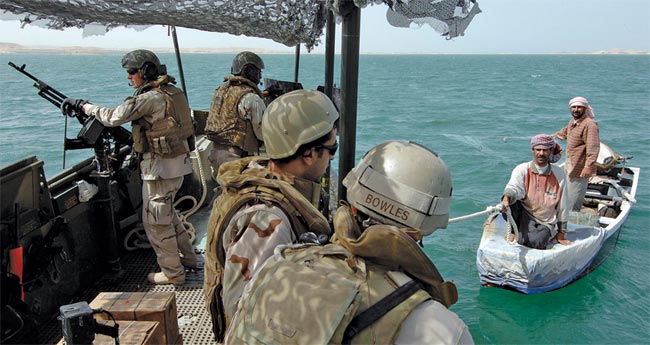 9 September 2007, Haditha, Iraq. Navy Petty Officer 1st Class Garrick Bowles and an interpreter warn local fishermen about a planned curfew on the Euphrates River during the Muslim holiday of Ramadan. Bowles and the RPB crew are members of the Maritime Interdiction Operations (MIO) team from RIVRON ONE, Detachment 3. The purpose of the temporary curfew is to stem an anticipated increase in enemy activity during the holiday. (U.S. Navy photo by PO2 Marcos Hernandez)

SADJ:  What special maintenance needs to be done with them – particularly while operating in a semi-salt water environment?

Lopez:  Nothing special at all, just more attention to detail.  Not just with the GAU but all of our weapons.  Constantly have to be on them cleaning, wiping, making sure when we squeeze that trigger we can get that end result.

SADJ:  How about ‘tricks of the trade,’ anything that’s not in the maintenance manuals?

Lopez:  During deployment in sandy and dusty conditions just a thin coat of CLP.  We try to keep it kind of dry.  You don’t want too much.  That sand builds up, cakes up on the weapon.  Use just enough to keep it running.  Obviously, when you’re out here in this kind of environment (heavy rain at Camp Lejeune) you’ll apply more CLP.

Sanchez:  Probably when it’s raining, to constantly have dry rags on hand.  But we bring that stuff out so I don’t have any issues.  We keep everything the way it needs to be so it fires.

SADJ:  Any ‘wish list’ for accessories that you believe will improve the effectiveness of the detachment’s crew served weapons?

Sanchez:  ‘Fifteens’ (AN/PVS-15) might be nice as far as NVGs (Night Vision Goggles).  The dual viewfinders give better depth perception but we can still do the job fine with that we’ve got (PVS-14).

SADJ:  How about what’s mounted on the weapon itself?  Like a Night Vision Sight?

Lopez:  Once you start firing that scope wouldn’t work (because of muzzle flash).  Our weapon mounted laser sight is good when used with NVGs.

SADJ:  In training do you use the 1-in-5 tracer to ball mix?

Sanchez:  We adjust on impact.

Lopez:  For training, it’s just standard ball.  The demand for APTI is greater in theater (Iraq).