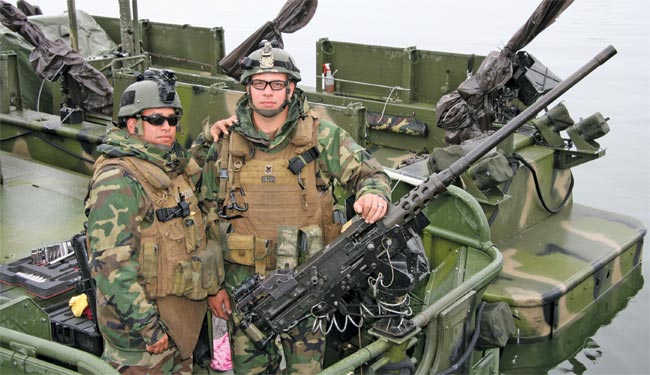 SADJ:  Lieutenant, is there a problem getting .50 caliber tracer ammo?

Ashley:  It would just be more about what the command (authorizes), what these guys get before they go on training operations.  It hasn’t been an issue as far as getting it.

SADJ:  When you deploy in country is tracer and APTI available?

SADJ:  The Coast Guard has some special 7.62mm short range ammunition for use in certain congested areas.

Ashley:  There’s talk of us going to it because it opens up a lot of ranges that we could use.  Right now it’s not in our allowance.

SADJ:  Any recommendations for changes to mounts?  We talked about how the MK 19 really shakes that heavy weapon mount.

Sanchez:  The MK 93 mount has buffers underneath the weapon that absorb a lot of it and the coxswains – the drivers of the boat – adjust however they need to while you’re firing the fifty or the MK 19 from the aft heavy weapon mount.

SADJ:  Both of those weapons (M2 and Mk 19) are recoil operated.  Do you have to tweak the recoil buffer so that you don’t have cycling problems?

SADJ:  So the guys at NCWC Crane who developed the MK 93 mount must have gotten it right.  How about the mounts for the 7.62mm guns?

Sanchez:  They’re hard mounts with no recoil buffer.  We haven’t had any issues at all with them.  Also, all the mounts have adjustable traversing safety stops so you can’t shoot your own boat.

SADJ:  Would you recommend any changes to how the ammunition is carried on the mounts?  Or add a rain shield or splash shield?  Anything?

Sanchez:  I’m happy with the way we’re running.  I like it personally.

Lopez:  It just depends on what mission you have and where you’re operating.  Is it going to hamper you when you’re going to reload, what happens when the gun gets hot from shooting?  It brings up more questions.  Keep it simple.

SADJ:  What’s the next level of maintenance and repair for your weapons when they break down?

Lopez:  We’re self-sufficient on a lot of things but we know when we have to send a weapon outside the command because we just can’t fabricate those parts.  The knowledge they (specially trained armorers in the detachment) have keeps our weapons going.

SADJ:  But the turn-around time doesn’t leave you with an empty gun station?

Sanchez:  No, we have plenty to fill in with.  If we have to we can pull from another detachment but it’s not really an issue, ever.

Sanchez:  We did a seven month deployment (to Iraq) out of Lake Thar Thar and the Thar Thar River.  Support missions for just about every unit out there.  Inserting and extracting RSTs, sweeping villages and gathering intel.  Stopping boats, looking for contraband, any illegal activities.

Ashley:  We were focused a lot on ‘atmospheric collection,’ census type data to get a feel for who was operating on the water, living on the water, kind of the cultural aspects of it.  Less intrusive and more to let the Iraqi people know we’re here to provide security.  ‘Help us help you.’

Sanchez:  We were nearby a few of them but we didn’t actually have any direct support to those.

SADJ:  What lessons did you learn about yourself as a result of your deployment?

Sanchez:  I can withstand mass amounts of heat (laughs).  You’d think it was 200 degrees on some of those days.

Lopez:  We weren’t really prepared for 120 degree plus heat but once we got there we knew what to do; hydration, how to take care of your body, hygiene.  All those things that people take for granted when they’re stateside come into play when your resources are limited.  With adequate training you can overcome anything.  Then there’s patience, dealing with people, language barriers, plus you have to deal with civilians, the Iraqi Army and Police Forces.  You have to have patience for that, taking your time in dealing with them.

SADJ:  How about your boatmates?

Sanchez:  Same thing for them; I’m sure I can speak for them.  They did an outstanding job over there.  Got the job done.

SADJ:  Your body armor is heavy, hot and bulky and more so at 120 degrees.  Do you wear it at all times on missions?

Sanchez:  All the time.  When you’re underway there’s a little bit of breeze (but) only when you’re moving and then it’s like a hair dryer blowin’ in your face.

SADJ:  Spend the night on the boats?

Lopez:  When you go out on a mission and you get caught out there however long you stayed out there.  We operated out in the field close to where our base was.

SADJ:  How cold does it get in the wintertime over there?

Lopez:  Rainy and cold about like this (Camp Lejeune).

SADJ:  Where’s the next deployment?

Sanchez:  They’re telling us anywhere at this point.

Ashley:  Right now it’s up in the air.  The way the rotation works there are successive squadrons in Iraq (1, 2 and 3).  The mission in Iraq is ramping down so we could be possibly sent anywhere there are rivers.

Ashley:  They do.  I believe it’s one river that floods pretty regularly, with rapids and rocks (smiles).  I’d be really surprised if they sent us up there.

SADJ:  What advice do you have for Riverines, GMs in particular, preparing for their first deployment?

Lopez:  Project what you need, supply-wise.  We could be going somewhere way out of the supply system.  Take what you think you’ll need and that way you’ll have a stockpile; oils, rags, cleaning materials, solvents.  Everything you need for your weapons.  Prepare yourself to an excess and you’ll be good to go.

SADJ:  How about mental preparation?

Sanchez:  A pretty standard thing.  In the military you do what you gotta do and get the job done.

SADJ:  Is there much turnover in personnel?  How many new guys since last deployment?

Sanchez:  We’ve got about three guys (laughs).  They catch on fast and they’re caught up now.  No issues, a very smooth process.

SADJ:  What’s the hardest thing for the younger sailors, the ones on their first deployment?

Lopez:  I guess they get frustrated.  Not having that contact with family.

Sanchez:  I think they’ve got it good (laughs), real good.

Lopez:  You take what you need.  You can get ‘care packages’, stuff like that.  You bring your snacks and basically take care of your own comforts.

SADJ:  How about the brotherhood of a boat crew, do you tend to stay together or do they mix and match?

Lopez:  Initially that’s how it was but now we’re starting to operate by mixing the boat crews and I think that’s better.  You get to know other people but the training is more standardized.  That way it’s not ‘this is how my boat crew does it’ (but) there’s a standard format.  For example if someone was gone, taken out, injured, I can take another person from another crew.  He’s got to know exactly what to do.  I know he can operate exactly like the previous member.

SADJ:  Help us understand this from an Army or Marine Corps perspective.  If you’re in a combat arms unit it’s your squad, fire team, tank or gun crew.  It’s going to be pretty much the same men the whole time.

Lopez:  Yes, but people transfer, people get injured or go on leave.  So you have to supplement your crew sometimes with other personnel.  Also, now that we have the RAB (Riverine Assault Boat) in our detachment there are two more gunner stations.  An RPB crew is generally five people but on the RAB you have five weapon stations so you have more people on that one boat crew.  You have to supplement them from other boat crews.  It’s generally a mixture of boat teams.  Instances like that happen regularly.

SADJ:  But for the most part individual boat crews stay together?

Sanchez:  We’ve already been on deployment with the majority of these guys – everybody’s pretty tight.

SADJ:  Have you had to throw anybody overboard?

SADJ:  What would you like to say to young men about joining the Navy and why they should choose Riverine Forces?  Fast boats and guns?

Sanchez:  If you’re dedicated and you’ve got good motivation and you want to get into a combat environment I recommend Riverine to anybody who has all those three things.

Lopez:  A young man coming into this environment fresh out of Boot Camp; it’s a totally different environment than ‘Big Blue Navy.’  You’re going to have to be – first thing – self sufficient, a lot of initiative, someone to rely on, dependable.  This is a small unit, we do things by ourselves; we’re away from headquarters, away from ‘Big Navy.’   Wherever we’re deployed we’re always operating by ourselves.

SADJ:  What have we missed?

Lopez:  You’ve covered it.  The training is even better than when we initially started this command, the squadron.  On the crew served weapons, everything.  It’s evolving and I think it’s going in the right direction.

(SADJ extends special thanks to Captain Anthony Krueger, Commander, Riverine Group One, and Lieutenant (JG) William Ashley, Officer-in-Charge of Detachment 1, Riverine Squadron Three, for giving us the opportunity to observe and report on the intensive weapons training being conducted in preparation for RIVRON THREE’s second operational deployment.)

But wait, there’s more! Part Two of this article is available here.