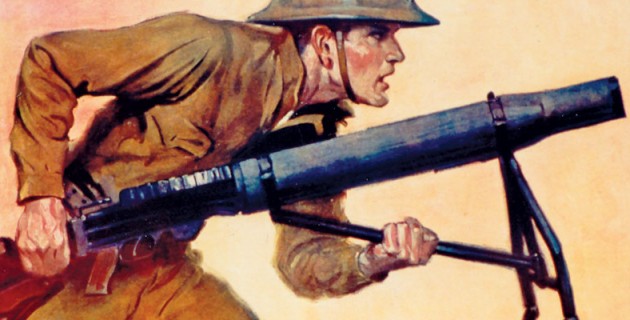 The Lewis Gun is the most recognized classic light machine gun in the world, with an honorable battle record seeing service in two world wars and countless others.  it was invented by an American, Col. Isaac Newton Lewis.

Col. Lewis was a United States Military Academy (West Point) graduate (1884) and spent twenty-five years in the United States Army assigned primarily to Coastal Artillery units.  He was a keen inventor and received a number of patents for artillery rangefinders and other artillery related equipment.  He also studied in Europe for several years learning about the armament industry.  It was while in Europe that he discovered that America was at least ten years behind in artillery and small arms manufacturing – particularly machine guns.

Having retired from the military, Col. Lewis was approached in 1910 by the Automatic Arms Company of Buffalo, New York to develop a machine gun using the patents from another inventor, Dr. Samuel McClean, based upon a gas operated rotating bolt locking system.  The weapon based upon Dr. McClean’s patents made the weapon far too heavy, complicated and clumsy for any practical purpose but Col. Lewis recognized that the principles were basically sound and had much potential.  He completely reworked the design to such an extent that for all practical purposes he may be regarded as the inventor of the gun that bears his name by designing an air-cooled, gas-operated, pan magazine fed light machine gun.  A few experimental guns were made in 1910 and 1911, but the Automatic Arms Company did not actually manufacture any Lewis guns; it served as a holding company for the Lewis gun patents and interests. By 1912, Col. Lewis had four hand-made prototypes of his new invention and gave a number of impressive demonstrations to senior army officers.  They appeared duly impressed but took no action.  On his own initiative he arranged an unofficial demonstration of the weapon being fired from an airplane – the first time this had ever been done.  He officially offered his gun to the United States but was rejected by the Army Chief of Ordnance, General Crozier, due primarily, it seems, to a conflict of personalities.  This rejection was to haunt General Crozier five years later when the United States entered World War I in 1917 resulting in a number of congressional inquires and accusations.  The U.S. had adopted the Automatic Machine Rifle Model of 1909 (Benet-Mercie) in 1909 and had no money for new equipment and, unlike Europe, considered machine guns to be of secondary importance.  General Crozier could not be bothered even with this obviously better weapon. Undaunted, Col. Lewis went to Europe to sell his gun and was enthusiastically received.  He helped establish the Armes Automatiques Lewis Company in Liege, Belgium in 1913 to manufacture the Lewis gun on a commercial basis for sale throughout Europe.  The British were also extremely interested in the light and efficient weapon particularly since six Lewis guns could be manufactured for the time and expense of making a single Vickers machine gun.  License was granted to the Birmingham Small Arms Company (B.S.A.) in Birmingham, England in late 1913.  The Armes Automatiques Lewis Company did not produce very many Lewis guns as Belgium was overrun by the Germans in 1914 at the outbreak of World War I.  Since B.S.A. was tooled up for production they were able to step in and supply the British and Belgian armies.  B.S.A. produced a total of 145,397 Lewis guns during World War I. Captain Chandler fires the first machine gun ever fired from an airplane on June 7, 1912 from a Wright Type B Pusher airplane.

As World War I settled into trench warfare, the importance of machine guns became obvious.  The Vickers was originally issued two per battalion but it soon became clear that more machine guns (and more flexibility) were needed when the Machine Gun Corps was formed in 1915.  To partially fill the gap, four Lewis guns were issued to each battalion.  As the war progressed, the Lewis gun proved itself in the rigors of combat in the hands of the British and Belgian soldiers.  The greatest asset was the mobility the gun provided.  One man could bring fire to bear and quickly move on the attack whereas the Vickers had a five man crew and had to be emplaced.  So successful was the use of the Lewis gun that Britain adopted it as a squad level weapon.  In addition, the Germans prized the capture of the Lewis gun and used it against the allied forces whenever possible.  The German armament industry was geared for the production of the heavy Maxim MG08 machine gun.  They didn’t have the time or resources to develop or copy the light machine gun so instead, using existing manufacturing facilities, modified and “lightened” the MG08 into the water-cooled MG08/15 – a heavy and clumsy alternative stop gap measure.  There was nothing like the Lewis gun on the battlefield.  The French Hotchkiss Portative and its English brother the Hotchkiss Portable Mk1 machine rifle didn’t even come close. U.S. Marines pose with their Lewis machine guns. Although the Marines were well trained with the Lewis in the U.S., they were taken away when they arrived in France and issued the inferior French Model 1915 Chauchat.

B.S.A. could not keep up with the demand for Lewis guns and contracted with the Savage Arms Company in Utica, New York as an additional supplier.  Because of the great success of the Lewis gun in Europe, American proponents pressed for its adoption in the U.S.  In 1916, the U.S. Army purchased 350 of the .303 caliber British contract guns from the Savage Arms Company for use by U.S. soldiers in the Mexican boarder war against Poncho Villa.  Yet, General Crozier still felt that the Lewis gun was not suitable for adoption.  When the United States entered the war in April 1917, the Navy purchased 6,000 guns for issue to the Marine Corps.  The Marines trained at great length with the Lewis gun while in the United States, but when sent to France and attached to the 2nd Infantry Division, the Lewis’ were inexplicably taken away and the Marines were issued with the French Chauchat Model 1915 – a decidedly inferior gun.  The Army begrudgingly purchased 2,500 guns but used them for training purposes.  But it was found that the Lewis gun was perfect for use in aircraft and by the end of the war in 1918 the U.S. Army had purchased 34,000 Lewis aircraft guns.