Note: Part Two of this article is available here.

The “Brown Water Navy” is back in force and elements of Captain Kruger’s command have been conducting operations on Iraq’s waterways without a break since February 2007.  Proudly carrying forward the legacy of the U.S. Navy’s famed River Patrol Force of the Vietnam War, today’s hard-charging Riverines are superbly equipped, armed and trained for a wide range of specialized missions.

Their weapons are standard issue but there is little that is ordinary in their operational environment.  While extreme temperatures, dust and precipitation are familiar foes to all combatants, Riverines face special challenges in maximizing the effectiveness of their guns while underway and during landside missions.

SADJ talked at length with several experienced Riverines about these challenges.  Their observations, we believe, will prove useful for a variety of warfighters on land, sea and in the air.  This first installment in a two-part series affords a close look into specialized Riverine watercraft, the versatile array of crew-served weapons aboard and the dedicated Sailors who man the guns.

Fast Boats and Machine Guns
SADJ’s first encounter with Detachment 1 of Riverine Squadron 3 came on the morning of April 2, 2009, at Mile Hammock Bay on Camp Lejeune Marine Corps Base, as they were preparing for another long training day.  Heavy overcast, fog and driving rain emphasized the challenges of operating in all weather conditions but the hardy Riverines were eager to get underway for long-scheduled live fire maneuvers.

But waiting for a weather change that would allow range clearance afforded a good time for the requested interviews.  We climbed up into the back of one of the unit’s heavily armored trucks to meet with two Riverines who had gamely volunteered for the task; Gunners Mate 1st Class (EXW/SW) Adam John Sanchez and Gunners Mate Chief (EXW/SW) Geovarrie “Geo” M. Lopez, both well seasoned Sailors.

The 29 year old Sanchez hails from Eagle River, Alaska, where he spent some time as a fishing guide.  His ten years in the Navy included service on USS Spruance Guided Missile Destroyer before volunteering for Riverine two years ago.  He soon deployed to Iraq with Det 1 and earned the Navy-Marine Corps Achievement Medal.  He has been a Boat Captain for one year and his additional skills include Range Safety Officer and Crew Served Weapons Instructor.

Lopez, 35 years old, calls Key West, Florida, his hometown.  He’s had a number of different assignments during seventeen years in the Navy, notably aboard the USS Gettysburg Guided Missile Cruiser.  Volunteering for Riverine, he has two years with Det 1 and its Iraq deployment, earning the Navy-Marine Corps Achievement Medal.  Lopez is a Boat Captain and a qualified Small Arms Instructor.

It worked well to interview them together because each one’s observations tended to bring additional insights from the other.

SADJ:  Why did you join the Navy and then transition to Riverine?

Sanchez:  I considered a career in law enforcement and knew that Navy experience would be a good start.  I have military in the family and they recommended the Navy.  I asked for assignment to Riverine to ‘ramp up my career’ and get some combat experience.

Lopez:  It was in my blood, my father’s also in the Navy.  I’d seen my father’s experiences and wanted that part of my life as well.  I went from the Army’s 82nd Airborne Division to Yeoman in Navy.  I volunteered for Riverine, a job with action and combat experience.

SADJ:  Are you personally interested in firearms and shooting?

Lopez: I do like shooting, I love guns and it happens to be my job also as a GM.

SADJ:  What schools and training have prepared you for your current duties? 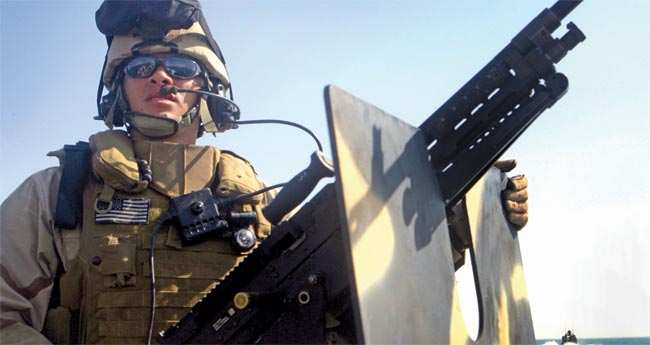 5 July 2008, Lake Quadisyah, Iraq. U.S. Navy Gunners Mate Jose Caro of RIVRON THREE scans the horizon beyond his M240 machine gun station aboard a Riverine Patrol Boat (RPB) conducting a security patrol near Haditha. Caro’s headphones and mic are plugged into the boat’s intercom system and hitting the switch box on his chest allows him to communicate clearly with all members of the crew despite high noise level while underway. (U.S. Marine Corps photo by Cpl. Seth Maggard)

SADJ:  Do you have the opportunity to train using computer simulators?

Lopez:  No, we do actual training on the boats.  Parked dry runs to get familiar with your stations so when you actually get on the water the only thing you have to get is your ‘sea legs’ to get your balance.  No simulation, always reality with blanks then live ammo.  We shoot underway against static targets.

Sanchez:  Same training cycle.  We all went through the 0331 Machine Gunner Course for the Marine Corps, helped a lot.  They definitely pound in the information and that helps a lot.  I had simulators in the 0814 CSWI school but as far as the rest of the unit, no.  A couple others have had the CSWI course as well.  STS did a good job in teaching, outstanding training, probably one of the better schools I’ve been to ever.

SADJ:  Is there enough time allocated for training?

Sanchez:  Yes, time has been OK but very condensed.  The gunners are learning what they need to learn.  Maybe expand the time a bit for a little more proficiency but overall it’s outstanding training.

Lopez:  Definitely more training is always better.  As of right now its doing the job and I know it’s getting people’s proficiency up on the weapons.  New gunners on their first deployment are jumpin’ right in.  I know I can rely on those guys on the guns to do their job.

Lopez:  Definitely what we need to be doing, most of our work is at nighttime.  That’s really when you find out if the gunners are comfortable with what they’re doing.  Anybody can do it in the daytime.  The comfort zone for those gunners at nighttime changes when they have that night vision on and one of their eyes can’t see.  They start shooting that gun and the flash wipes everything out.  You find out their comfort levels and proficiency at nighttime.

SADJ:  What do you teach to compensate for that — close one eye?

Sanchez:  Yeah, that’s one technique.  Another is to move the NVG away from your face and look under it. It works because of the tracers once you’re on target.  You use your laser to initiate the contact through NVGs and once you’re on target you can look underneath them (using tracers) and that works as well. 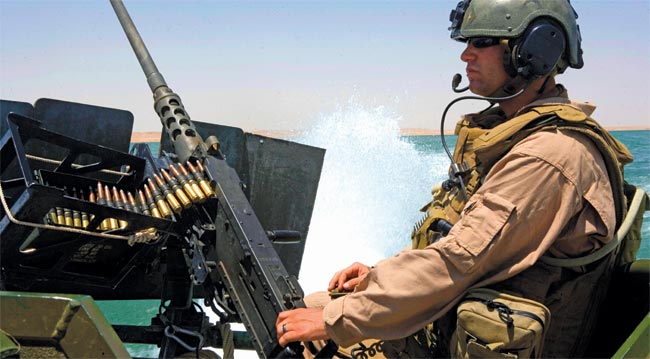 SADJ:  Do you use parachute flares for illumination?

Sanchez:  We have the capability but tactically that’s not done.  We’re lighting ourselves up enough with the muzzle flashes.  We’re kind of in a unique situation because we have one way in and one way out on the river.  There’s no sense in illuminating us any more than we need to.

SADJ:  What recommendations to the chain to improve operator skill with weapons?

Sanchez:  It’s already being done.  Riverine Group is constantly improving through critiques of training and operations.  Our situation as RIVRON 3, we’re able to get the better training product because RIVRON 1 and 2 go through before us.

Lopez:  Definitely, we have the best product that has been generated through the training cycle.  And because we’re the first detachment in our squadron, we’re able to help the other two dets for their training cycle.  Whatever we critique in our after action reports group can make some more improvements and it keeps on evolving and they get better training.

SADJ:  How about the Riverine Security Teams (RSTs)?

Sanchez:  They’re in a different training pipeline; then we meet to do an interoperability where we all work together.

Lopez:  Each Detachment has RSTs and their training is specific to the landside.  They can’t do their mission without us and we can’t do our mission without them.  They’re boat riders but they’re also trained as crew served weapon gunners.  If one of our guys takes a hit they know what to do and can take over as well.