For a long time, there have been various rumors that IWI (Israeli Weapon Industries) is working on a new 5.56mm rifle. One of the main characteristics is that the rifle will be a traditional-style, non-bullpup rifle. It’s also rumored to extensively use a polymer shell, similar to their Tavor series of rifles currently in use by military and law enforcement in various countries such as Ukraine, Honduras, India, Philippines, and so on. 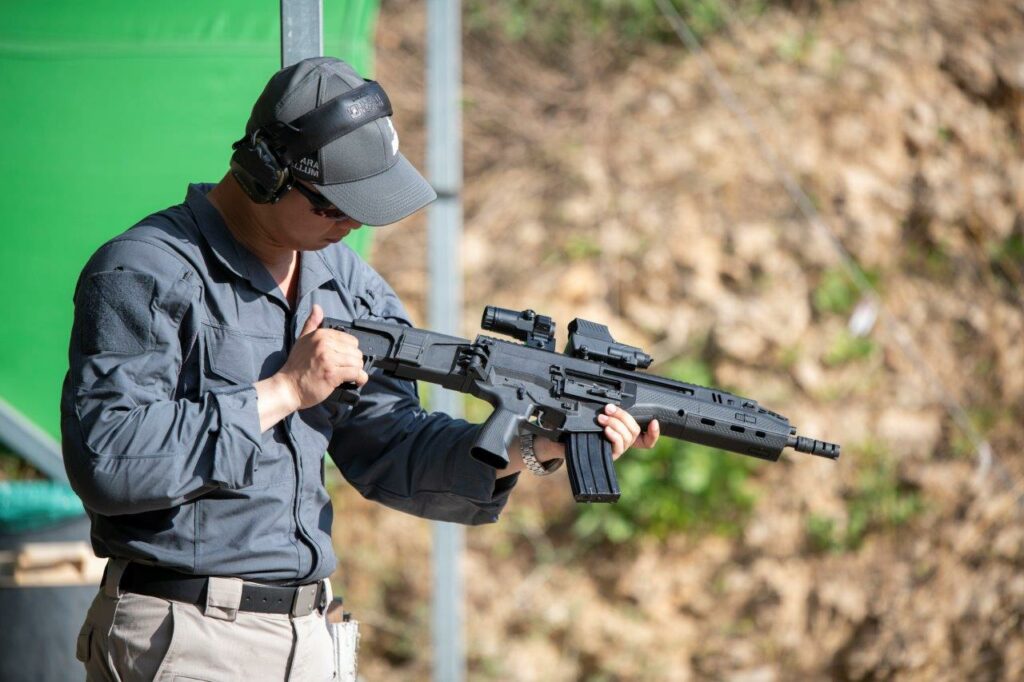 The “Carmel,” named after Mount Carmel which is a coastal mountain range in northern Israel next to Haifa, was unveiled to the public in April 2019 at the LAAD Defence & Security trade show in Rio de Janeiro, catching many people by surprise. I was very excited to see this new rifle platform, so much so that I flew to Israel to try it out.

There seems to be a trend with various manufacturers around the world to have new and common features such as fully adjustable folding stocks, fully ambidextrous controls, non-reciprocating charging handles, etc. This is likely to be driven by requirements from government contracts. The Galil ACE®, while it has proved itself over the years, does not meet all these new requirements. Thus, a new rifle design was born.

However, instead of using either an aluminum upper with a polymer lower receiver like the FN Scar, CZ Bren 2 or HK433, IWI has chosen to go with a full external polymer shell with internal aluminum reinforcements.

The Carmel is short-stroke, gas-piston-driven with three adjustable gas settings: normal, adverse and suppressed. The suppressed setting is necessary due to the ever-increasing use of suppressors in various Special Forces units worldwide. The gas settings can easily be adjusted on the exposed part of the gas block using the tip of a bullet just like on the Tavor 7.

Various barrel lengths are available, 10.5 inches, 12 inches, 14.5 inches and 16 inches. The rate of fire is 850 rounds per minute which makes this rifle controllable even under full-auto fire. As with all IWI products, the barrels are cold-hammer forged.

On the handguard, hidden under polymer panels, are polymer Picatinny rails at 3, 6 and 9 o’clock. The panels can be unlocked and removed by pressing the tab with your finger similar to the X95. The handguard feels slightly large, but the operator can remove the rail panels and install slimmer rail covers if needed. On the left side of the handguard hides a small lever that can be unlocked with a tip of a bullet for the quick-change barrel.

One of the unique features is the non-reciprocating charging handle. Instead of being a removable handle for switching from left to right and vice versa like the Tavor 7 and HK433, once set in the middle position, it can simply be pushed to the opposite side. This is even simpler than the Beretta ARX-160 design which requires the operator to flip the charging handle over to the other side.

If you are an AR-15 user, you will be right at home with the control. Everything is ambidextrous including the bolt hold-open and bolt release which are paddles (instead of a lever, such as on the HK416 A5) on the right side. The Carmel has a 90-degree safety with a shorter throw from semi- to full-auto. 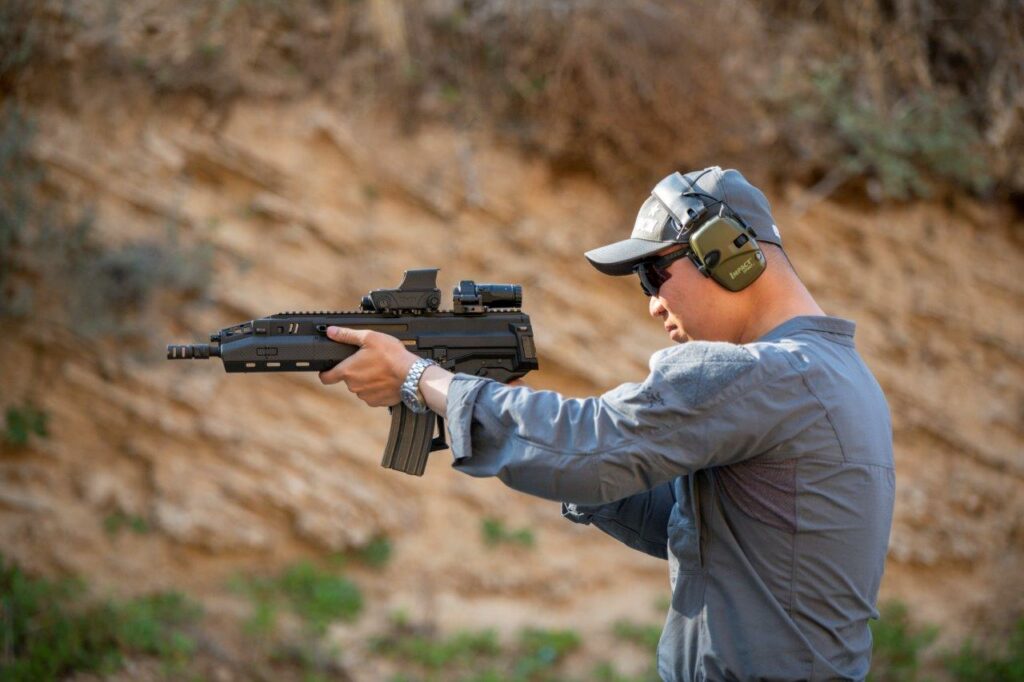 The folding, fully adjustable stock is intuitive and easy to use. There is a small tab at the rear to adjust the length of pull from its six positions. Shooting with just a shirt (no body armor), I find setting 2 or 3 to be quite comfortable. The cheek can also be raised to three different positions by pressing the two tabs on the left and right sides at the same time. The lowest setting at 1 works perfectly with the Mepro Foresight optic. The rifle can be fired with the stock folded. 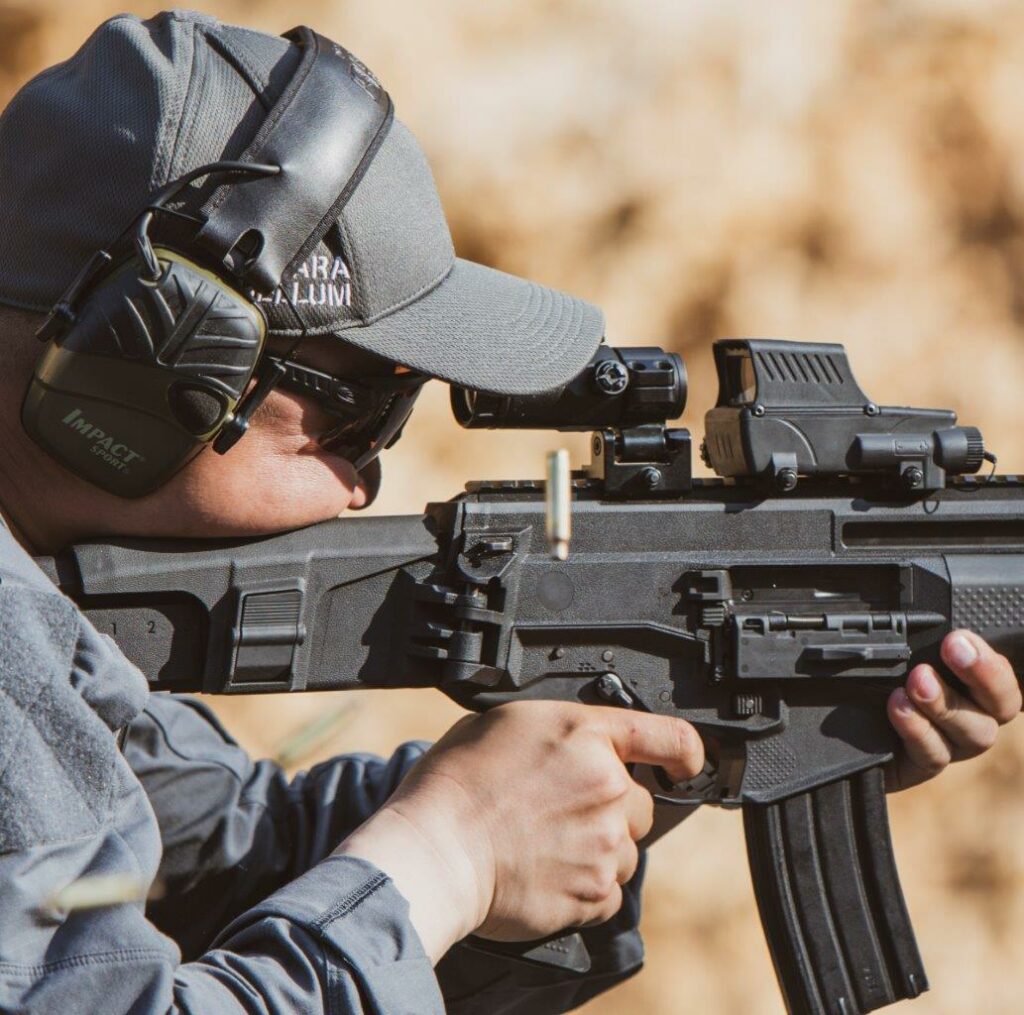 The stock folding latch is large and looks to be designed for abuse. With the stock folded, it unveils another latch that unlocks, and the bolt carrier group, together with the captive dual recoil spring, comes out for field-strip and cleaning.

How Does It Shoot?

The author’s first impression of picking up the Carmel is the almost upright pistol grip. This makes holding the rifle very comfortable without adding strain to the shooter’s wrist. The grip, along with the trigger guard, is part of the lower receiver and cannot be switched out. For the author’s medium-sized hands, there’s no need to change this.

The rifle feels light at 3.3kg (7.27 pounds) without the magazine and is equipped with the 10.5-inch barrel. That is slightly lighter than a Micro Tavor X95 with a 13-inch barrel at 7.5 pounds.

The trigger feels good on initial take-up but becomes lighter as it’s squeezed and breaks light and clean. It’s certainly a very good service rifle trigger at around 6 to 6.5 pounds with a positive and short reset compared to most MIL-SPEC triggers.

The long polymer cheek piece provides comfortable shooting from standing to prone positions, and a large, angled recoil pad offers great support on the shoulder. I was told to use a C-clamp-style grip with my left hand right up to the end of the handguard where it angles down to the gas block adjustment knob. I was able to do a 30-round, full-auto mag dump at 15m toward a human-size steel target with ease. Impressive! 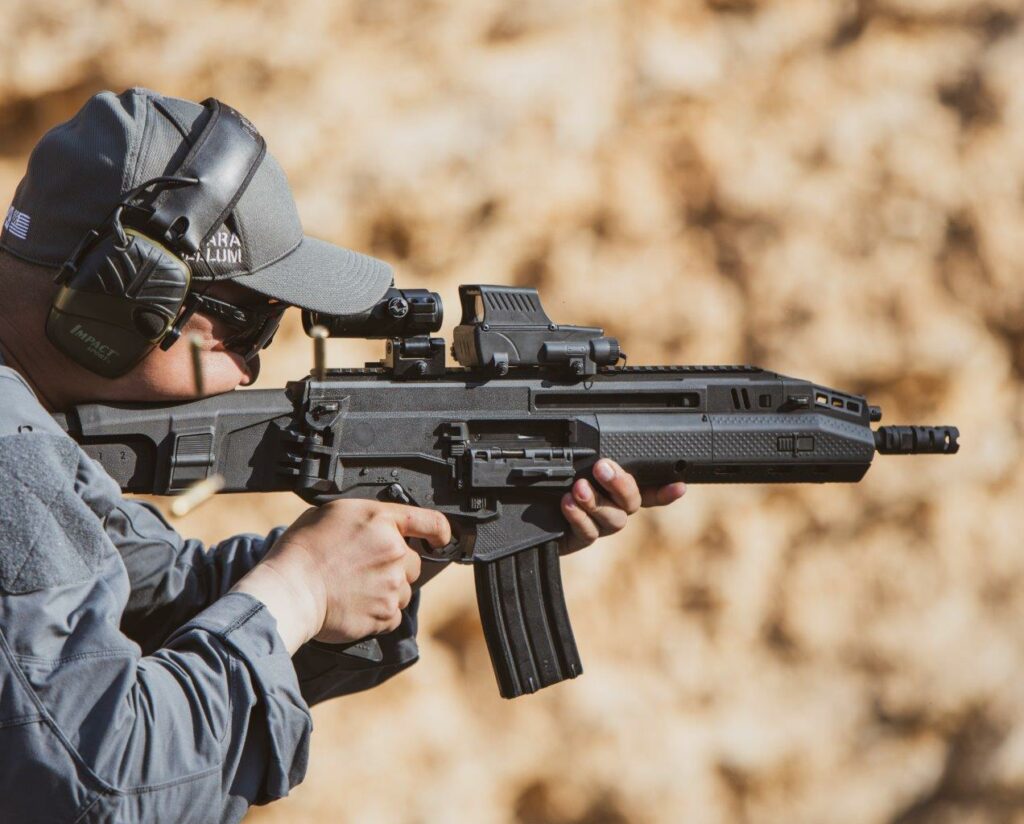 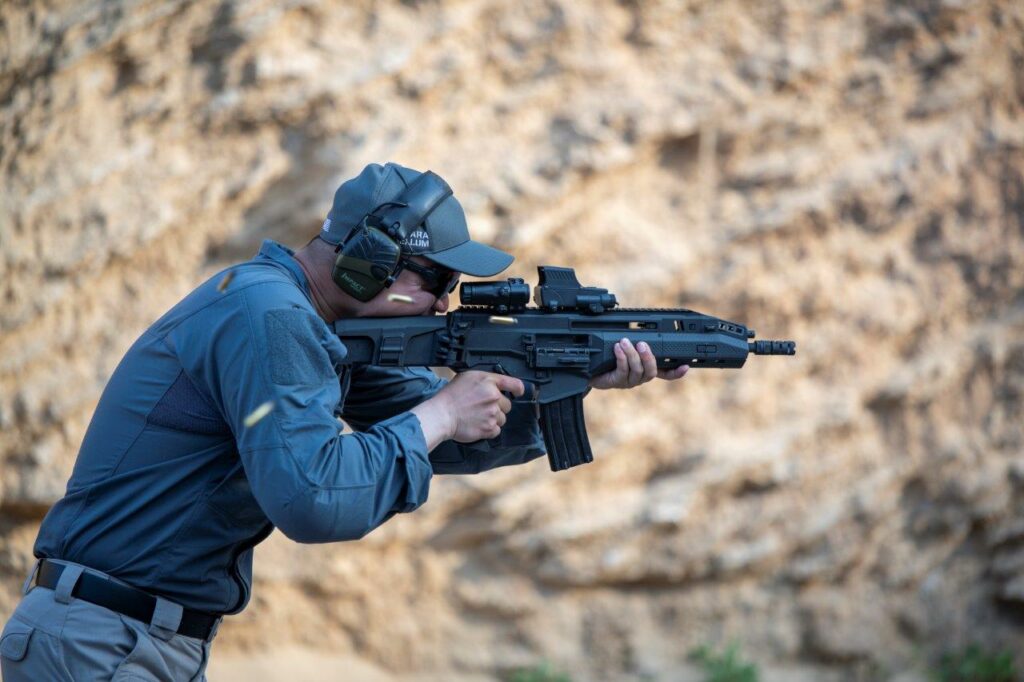 Overall, with over 80 years of experience in making automatic weapons, it is not surprising at all that IWI knows how to make the Carmel rifle tick like a precision Swiss watch.

No Commercial Version in Sight

IWI does not have information on when a semi-automatic only, civilian-legal version will be available. It’s safe to say it will be quite some time before we will see it. Just like the HK433, it is first and foremost catered to the LE and military markets. Deliveries of the Carmel have already begun, but IWI is mum about to whom or where these rifles are going.

Representatives from Meprolight, an Israeli optics company also under the SK Group, were present to show a hardware-finalized version of the new Mepro Foresight. First unveiled at SHOT Show in January 2019, the Mepro Foresight is an augmented weapon sight that features multiple reticle options, compass, leveler and shot counter (to be available later via a firmware update) as well as built-in lithium battery with USB charging. It also features Bluetooth, which, when connected to the Mepro Foresight app on your smartphone, offers up to 10 gun profiles that store the zero of the optic and other settings.

The optic is non-magnified at 1x, but it is compatible with Meprolight’s MX3 series of 3x magnifiers.

The display is amber in color, with a hint of purple tint on the glass to enhance visibility as well as battery life. Battery life will get the most criticism here, rated for only 2 days. But how long does your smartphone last with one charge? The idea is you can charge it using your phone or a battery pack that you may be already carrying for charging your phone. It does have a low-power mode that automatically engages when the battery is low and disables all other on-screen functions except the reticle. The Android app will be available first, followed by the iOS version. At the time of writing, the Android app is in its final phase of testing. 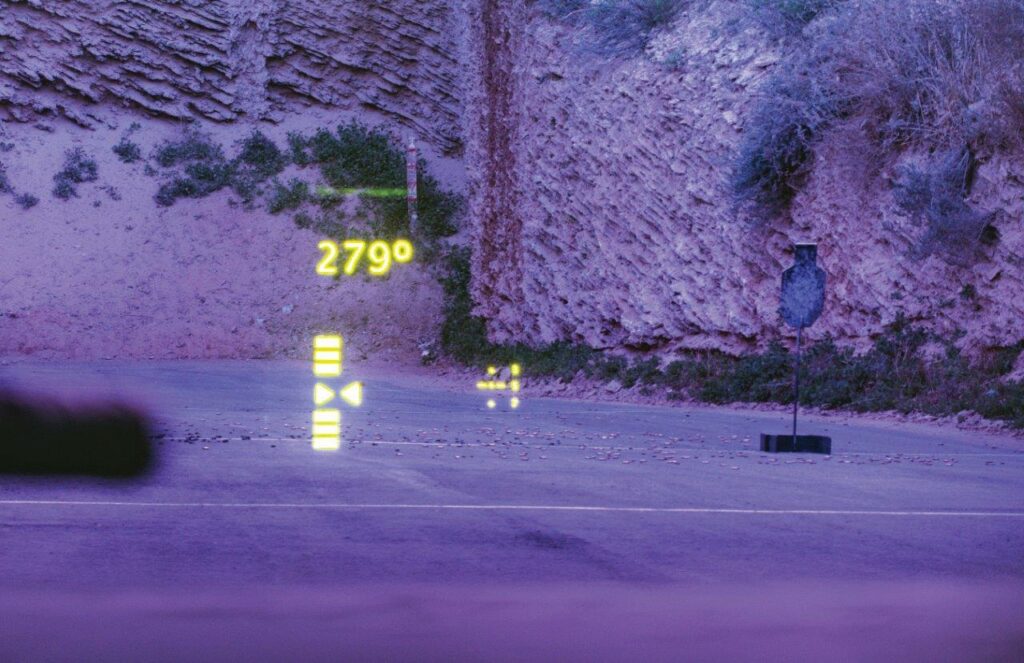 This is the author’s first time using this sight mounted to a rifle in an outdoor setting. The objective is large and unobtrusive, similar to the Mepro M5 electro-optical red dot sight which is standard issue on X95 rifles for the IDF (Israel Defense Forces). The experience can only be described as being in a video game. The compass and leveler shown on the upper left and left display area are sensitive to small movements, and they can be disabled in the menu setting if the operator finds the display to be too cluttered with information. There’s a battery icon showing the battery percentage level on the upper right corner as well.

This rifle is part of a revamp of IWI’s product line starting with the Masada 9mm striker-fired polymer pistol. While there are many countries, particularly in the South American and Asian regions, that have issued Galils and Tavors, the rest of the western world has a fresh set of requirements. IWI is no longer constricted to selling only Galils, Uzis, bullpups and hammer-fired pistols. They have caught on to other small arms manufacturers such as Heckler & Koch, CZ and FN that produce modernized modular assault rifles for the 21st century and beyond.

The author sincerely thanks Shiri Katsav Begoon, Yoav Hirshberg at IWI and Amir Karo at Meprolight as well as the rest of the IWI and Meprolight team for inviting and spending a warm summer afternoon with me at the range, showing me these interesting new products.