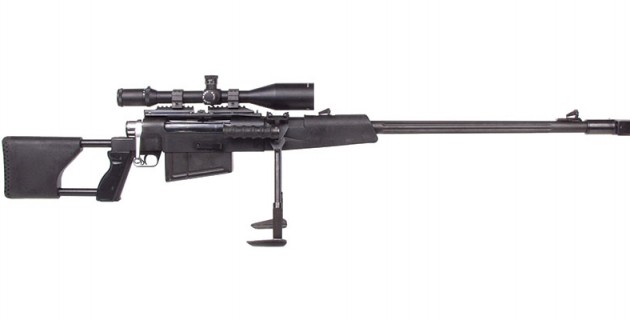 ABOVE: The scope mount had to be canted to the left and the carrying handle to the right to locate the handle at the rifle’s balance point. The bipod is also at the balance point. (Max Popenker). Below. Zastava designed the action of the M93 Black Arrow after the Mauser. It is a bolt action with a five-round magazine. It’s unusual in that the buttstock isn’t adjustable. Diegtyaryova Shpagina Krupnokaliberny (DShK) was a machine gun designed in 1938. The 12.7mm round it fired has become the Russian .50 cal. The Black Arrow fired this round to great effect in Macedonia and Serbia. (Max Popenker)

Zastava Arms is currently located in the city of Kragujevac in Serbia. Prior to 1851 it had been in Belgrade, but by moving to its present location it was able to provide the Principality of Serbia with its own arms and equipment manufacturing facility. Before World War Two the factory employed over 12,000 workers and 10,000 machines. After the war, production was shifted to sporting arms like the M48 rifle. Today the factory produces artillery weapons, anti-aircraft guns, assault rifles, machine guns, grenade launchers and sporting arms for civilian use. We know the company mostly for its Mauser-based M70/85 series of rifles and its
CZ 99 pistols.

Zastava also manufacturers the M93 Black Arrow anti-material rifle. Chambered in 12.7x108mm (Warsaw Pact) or .50 caliber BMG (NATO), it is based on the Mauser 98 rifle that’s been around since 1898, but in a much larger size. It is a bolt action with a five-round magazine. Operation is controlled-round feed. The square receiver stretches 14 inches long, three inches high and two inches wide. The bolt weighs three pounds and has a one inch diameter. Bolt handle length is 3.5 inches, sufficient to cam open the action with ease. It’s been said, though, that a soft rubber hammer must occasionally be employed as a persuader to lift the bolt. The safety is in the trigger guard, behind the trigger and locks the trigger.

Zastava designed the M93 action after the Mauser, which has proven itself over 100 years of combat. Like most large caliber sniper/anti-material rifles, its main purpose is the interdiction of material targets at long range. It proved its worth in Serbia and Macedonia during their recent unpleasantness. What’s somewhat unusual, though, is that the buttstock is not adjustable – you must adjust to the rifle.

Because of the powerful recoil of the DShK cartridge, the stock is fitted with two spring buffers and the heavy, free-floating barrel is capped by a large muzzle brake. The carrying handle mounts on a bracket above the barrel that also mounts the bipod that can be used to raise the barrel to clear obstacles. The nine inch legs extend to an overall length of thirteen inches. Both feet have flat plates welded on the bottom to prevent sinking into sand or loose soil. Weight, including scope and wooden carry box is in the neighborhood of 70 lbs. Because the rifle is intended for long range operation only, it’s not fitted with iron sights. The standard scope is a Zrak 8 power, which is a little light for work out at 1,800 meters, as stated by the factory. It would do much better with a scope of at least 12-14.5 power, and the mount will accept Leupold, Nightforce, and others. In actual operation, the Zrak scope showed parallax, the elevation and windage knobs had a coarse action and each click produced slightly under 3 MOA movement. A Nightforce NXS is much better suited.

The M93 is not currently imported due to some manufacturer’s export license issues. However, a few rifles have been sold in the USA and sometimes are available through the usual outlets.