The Soviet Union and its current iteration, Russia, have long been known for innovative weapon development; only some of which has seen the light of day in the Western world.  There is a long history of effectively “keeping the lid” on new weapons until someone on the other side runs into them in the field and reports on them.  Rumors of a new cartridge and both a submachine gun and silenced sniper rifle utilizing this ammunition have leaked into the general Western military communities for many years, some have been on display at shows, and there have been several Western military personnel and firearms writers who have studied these and written some information on them.

None of these unique weapons have been seen by the general military population other than in isolated news clips, especially from the recent unpleasantness in the former Soviet State of Georgia.  When Russian military forces crossed into the northern provinces of Georgia and swiftly cut them off from the south, much of the world recoiled in horror and voiced platitudes about how the Russians must stop this assault.  Within a short period, the Russian military forces brilliantly transitioned into the “Peace-keepers” in the region, and photos leaked out to the Western press and intel communities showing strange Dragunov-looking weapons that were clearly too short to be in 7.62x54R caliber, and also very clearly integrally suppressed.  Pandemonium ensued as all resources were called upon to ID this weapon and the threat it represents.

There have been some excellent but isolated references on the 9x39mm ammunition and firearms, and Internet resources are limited of course to the writer’s experience with the weapons – usually non-existent other than in computer games.  Real time, take-it-apart, pull the trigger, hands-on testing has been very rare and certainly not widely reported.  Charles Cutshaw’s excellent book The New World of Russian Small Arms and Ammo (ISBN-10: 0873649931) does an excellent job and should be on everyone’s bookshelf, but his 1990s treatise is limited to Marshall Goldberg’s line drawings for illustration and he was not allowed to disassemble the weapons.

The MA “VIKHR” submachine gun is in reality a compact assault rifle since the 9x39mm cartridge it fires maintains its energy beyond 400 meters, even with this barrel length. It is not designed to be fired at distances anywhere near that, but the little powerhouse has that capability built into the ammunition. The VIKHR is designed for reliable full automatic fire, it is compact, can use either 10- or 20-round magazines but the 20-round is designed for this weapon. Note the over-folding sheet metal stock, the hinged top cover, and the tubular striker firing system. At only 2 kg, (4.4 lbs) the VIKHR is a briefcase sized fist full of power.

Two of the Small Arms Defense Journal writers were granted the opportunity to examine in detail both the weapons and the ammunition in the field at a discreet location in Southwest Asia.  In addition to extensive disassembly and photography, we were also given the opportunity to test fire both the VSS silenced sniper rifle and the VIKHR submachine gun with our meters ready to conduct scientific testing.  We wanted to be as thorough as possible with this unique opportunity.

There are some myths and assumptions made that we will try to gently correct, or at least provide another point of view on.  The first being that the MA “VIKHR” (Whirlwind) submachine gun is the same as the VSS “Vintorez” (Thread-cutter) with the exception of the buttstock and suppressor.  This is not true as the receivers are similar, and some parts will interchange, but they are not the same receiver with one simply being suppressed.

As is their standard procedure, the Russians had several factories competing to manufacture the 9x39mm weapon systems they required.  The end product offerings are as follows:

Our concern today is with two of the offerings from TsNIITochmash, the VIKHR and the VSS.

The VSS “Vintorez” is based on the VIKHR, but the receiver has notable differences and they do not interchange. The VSS is the weapon most readily identified in Georgia, and the system will not operate for more than one round with the suppressor removed as it was not intended to be fired with the suppressor removed. The exposure of the ported barrel alone would be a dissuader. The VSS weighs 2.6 kg (5.7 lbs) with suppressor, optic, and empty magazine. It can be broken down into component parts – suppressor, receiver, optic, buttstock, magazine, and packed into a very small space. It is quick to reassemble. The system does not use a standard hammer utilizing the tubular striker instead, and has very little in common with a Kalashnikov other than the appearance of some controls, and the fact that it is gas operated.

The AS-VAL is .1 kg lighter (.2 lb) than the VSS, and is about one inch shorter, but it can not be broken down for discreet use. The visual identifying signature of the VAL is the side folding stock. Other than that, it has very similar characteristics to the VSS.

SADJ did a complete comparative photo series, but space does not permit the publishing here. These two photos should show the similarities between the VSS and the VIKHR parts, and how minor differences make most parts incompatible. Aside from the VIKHR lacking an optical mounting rail, the receiver has a different shape at the rear. This is partly to facilitate the different types of selector used: the VIKHR is a push-through type while the VSS has a more tactile sniper-friendly lever behind the trigger. The interior fire control is basically the same other than the physical block differences. At first glance, the bolt carriers look identical, and they are very close, except that the VSS uses a charging handle on the bolt carrier while the VIKHR uses a forward ambidextrous system with a push-rod.

The VSS has been seen issued with the 1LH51 second generation night vision device (not shown), among other optics, but the PSO-1 variant shown here is standard with the IM2-1 marking. Note the “Hammer & Sickle” USSR marking. While the optic gives the appearance of being the same as a Dragunov scope, the stadia lines are different - estimating range only to 400 meters, and no adjusting Point of Aim chevrons. The optic has an illuminated reticle with remote power capability. 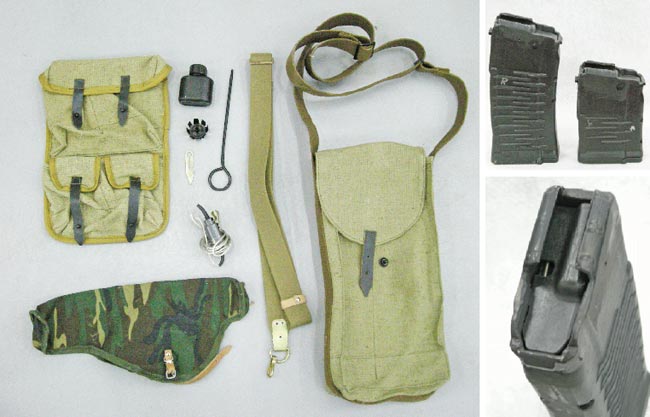 LEFT: The VSS is shipped in its own wooden chest, along with the following accessories: (Top left) Accessory/cleaning kit pouch. (Center) Oil bottle, WTH*, cleaning rod, screwdriver tool, remote battery cable and sling. (Right) Weapon carrying case suitable for weapon in tear-down state. (Lower left): Optic cover. Note: WTH* is a “What the Heck” because we have no idea what this round, scalloped sheet metal piece is or does, but it was in the chest, so is included here. RIGHT: The magazine for the VSS, VAL, and VIKHR all interchange. They are made of polymer with a standard style metal spring and are either 20 or 10 rounds. The 10-round magazine is basically for the VSS to lower the profile. The 20 round is for the VIKHR, but it is more concealable with a 10 round for carry. Doctrine appears to have evolved that operators use whichever they want.

The barrel of the VSS is approximately 12 cm longer that the Vikhr barrel, but the last 9 cm features barrel porting. The porting consists of six rows of nine ports spiraling along the rifling grooves. The twist rate is 1:210 mm (1:8.3 inches). Each port is approximately 2 mm diameter. The non-ported length of the VSS barrel is the same as the barrel in the Vikhr, which would lead one to believe that the muzzle velocities will be comparable. On the range we subsequently showed this to be the case. Visible in the second picture are the ports on the VSS barrel, as well as the large thread bushing that matches the interrupted threads on the trunnion for fast rotation of the suppressor on or off. This part is readily removable and should be cleaned, but if lost the suppressor will not mount or align properly, and will certainly put the weapon out of commission. 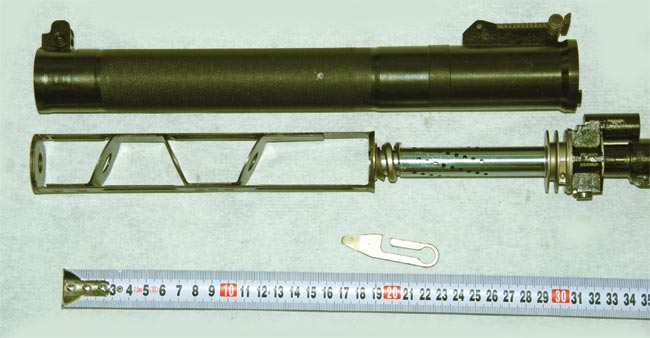 The silencer is exceptionally simple, especially when compared to Western designs, and bears more than a passing resemblance to the suppressor on the Soviet PB silenced Makarov. The entire silencer is unscrewed from the firearm after depressing a small button latch on the front of the frame of the firearm. This reveals the ported portion of the barrel. As shown in the accompanying photos, the stack is made entirely of spot welded sheet metal. The three baffles are punched and bent from a strip of 0.8 mm steel and are in the form of slanted “washer-type” oval baffles with the first and third slanting approximately 30 degrees (from perpendicular) one way and the middle slanted opposite. The strips, functioning as tabs, are spot welded to two longitudinal strips with a flat washer-baffle spot welded at each end. Reassembly consists of reversing disassembly.