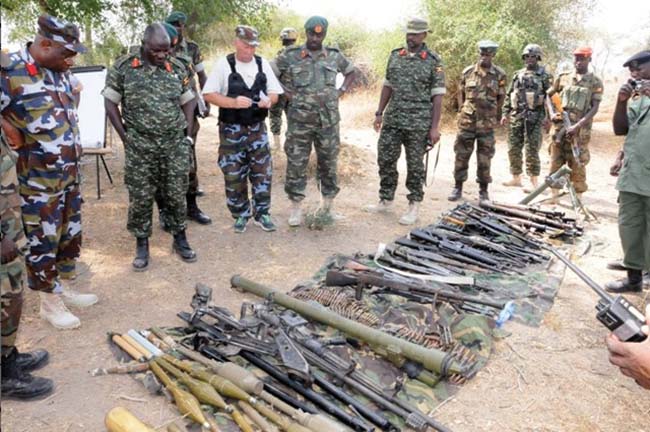 Seen in the bottom centre of the photo is a 9K310 Igla-1 (NATO designation: SA-16 Gimlet) man-portable air defence system (MANPADS). The weapons pictured were purportedly captured by soldiers of the Uganda People’s Defence Force (UPDF) stationed in South Sudan to protect key government installations from rebel forces. The weapons were displayed in Bor, the capital of Jonglei state. The 9K310 system was produced in the Soviet Union, and then later in Russia, and entered service in 1981. Whilst not as capable as the later generation 9K38 (SA-18) and 9K338 (SA-24) MANPADS, the 9K310 system is notably more effective than the earlier, ubiquitous 9K32 and 9K32M (SA-7a and SA-7b, respectively) systems. These include a higher top flight speed, greater firing range, and more sophisticated fuzing (delayed impact and magnetic, as well as grazing) and guidance mechanisms.

Also pictured are a variety of small arms and light weapons more commonly seen in the region, including rifles, medium and heavy machine guns, and RPG-7 projectiles. Amongst the latter are pictured two TBG-7 (or a close copy) thermobaric projectiles. These were developed in the Soviet Union sometime in the late 1980s, and are designed to disable enemy personnel in urban or mountainous terrain (including enemy combatants in buildings or fortifications) through a combination of heat and overpressure, as well as a secondary fragmentation effect.