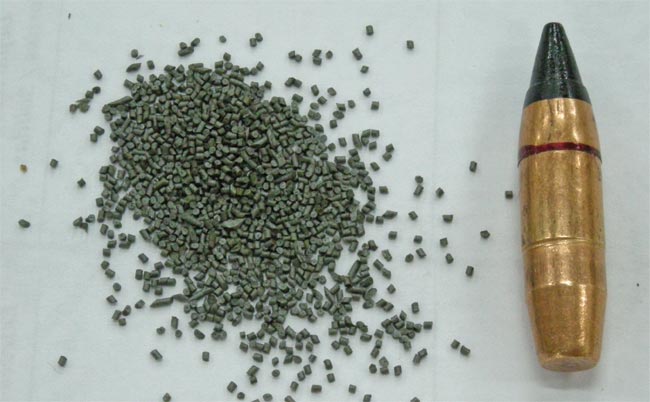 One of the first steps in evaluation was to disassemble a loaded cartridge to examine the components. We used a standard inertial bullet puller similar to the RCBS unit found on most handloaders’ workbenches. The 9x39mm cartridge case is based on the standard Soviet AK 7.62x39 case, except that the neck has been enlarged to accommodate a special 9mm projectile. The case length is 38.7 mm long with a maximum diameter of 11.03mm. The case weighs 107.3 grains. The nominal 9mm spire-point boat-tail projectile is 40.1 mm long and 9.21 mm diameter. The example we disassembled (SP-6) has black paint on the tip indicating that it is armor piercing. It weighs 245 grains. With an overall loaded cartridge length of 55.3 mm, only about 12.6 mm of the projectile protrudes with over 2/3 of the projectile length inside the cartridge case. Powder weight was approximately 9.3 grains. We were not able to identify the powder used, but it is a variable length tubular powder. We suspect the variable length is for different burn rates. 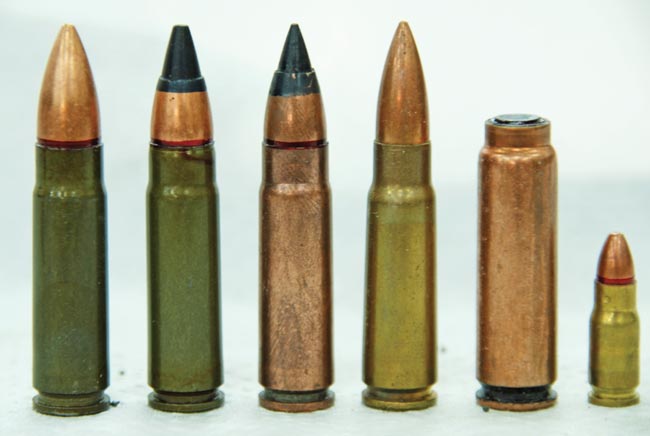 In the ammunition magazine that we searched, there were a number of wooden cases, each holding two sealed SPAM cans containing 400 rounds of 9x39mm ammunition each. Some were marked SP-6, and these did indeed hold armor piercing ammunition loaded in green steel cases. The ball ammunition samples we had available were also in green steel cases and are assumed to be the SP-5 ammunition. The ammunition SPAM cans we found that were marked SP-5 were actually labeled “SP-5 SNIPER” and were also black-tipped armor piercing like the SP-6 except loaded in brass (or brass plated) cases. As observed below, all loadings appear to be corrosive. There are no markings on the cartridge case examples we had – not even on the headstamp area normally used on the base.

Testing
We spent the better part of the only delightfully sunny day of our visit on the range performing function, velocity, sound, and crude penetration testing. The temperature was 83.5/29 (F/C), humidity was 37%, and the station pressure was 675 mmHg. The velocity of sound calculated to 1,143 ft/sec. We used the protocol in Mil-Std-1474D with the microphone 1 meter to the left of the muzzle 90 degrees to the bore axis and 1.6 meters above dirt (there was no grass in sight). For sound measurements, we used the Larson-Davis 800B with the LD 2530 1/4 inch pressure microphone and a recently re-certified LD CA250 calibrator. For velocity and rate-of-fire measurements, we used a PACT chronograph/timer. 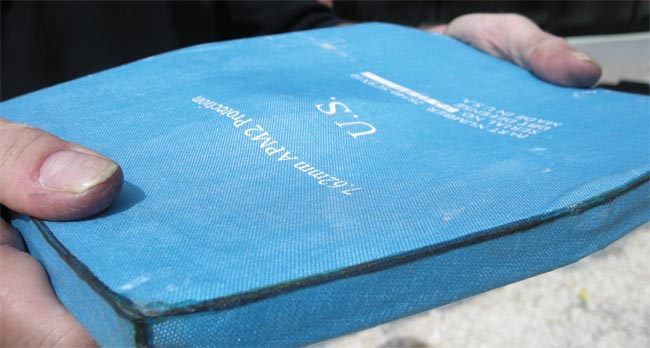 Not having access to ballistic gelatin or ballistic clay, we could not observe wound characteristics of this weapon system. We did somewhat crude tests of penetration using items of interest to law enforcement and military personnel. Penetration testing was performed using the SP-6 armor piercing ammunition in the VSS suppressed rifle, and the projectile easily penetrated a standard Level 2 Kevlar vest. We then fired one shot at a vest with Level 4 ceramic plates. While the projectile did not totally penetrate the ceramic plate, it seriously deformed the far (inner) surface, producing a bulge of approximately 1 cm thickness and 5 cm diameter. Although this may not be lethal, it will cause serious injury to the wearer, in all probability breaking underlying bone.

Suppressed, using the VSS, the measured sound levels were: 130.0, 130.3, 130.8, 129.0, 127.5, and 130.8 decibels. This averaged to 129.7 dB for a respectable reduction of 30.1 dB. The first round was 0.3dB louder than the average of the remaining rounds, and the standard deviation was 1.17. Velocity averaged 924.3 ft/second; only slightly less than the velocity in the Vikhr. With the SP-5 Sniper AP ammunition, the cyclic rate of the VSS rifle was 960 rounds per minute. This increase compared to the similarly designed Vikhr is predictable due to increased bore pressure of the suppressed weapon causing more rapid opening of the action.

We did measure the sound level and velocity of a few rounds of the standard SP-5 ball ammunition. The velocity measured 905 ft/second and the sound level was 120.8 dB for slightly less than 39 dB reduction. The decreased velocity and sound level are probably due to a heavier bullet containing a lead core rather than the steel core of the SP-5 Sniper ammunition.

We also fired this 9x39mm AP cartridge into a cinder block (complete penetration as to be expected) and into a large block of concrete. The concrete did stop the bullet, and the base was at least 1 cm below the surface of the concrete. We then chipped away the concrete surrounding the projectile (piece of rebar and a big rock as a hammer) until we could wiggle the projectile loose. What we recovered was only the steel core – the copper jacket and any intervening lead was not visible or recoverable. We did not have the facilities at this time to measure group size, although we understand that the accuracy is excellent out to 150 meters and our observation indicated 1-2 MOA. The optical sight accompanying the VSS has stadia specifically calibrated for the SP-5 Sniper armor piercing round. As an aside, we did disassemble the silencer the day following testing, and we noted some rust appearing on the baffles. This suggests that the ammunition may be corrosive. There was also noted to be significant carbon build-up on the outside of the barrel in the entrance chamber (that part which surrounds the ported section).

Summary
The 9x39mm cartridge is indeed a formidable piece of small arms ordnance. Although we only weighed the AP projectile, its weight of 245 grains, velocity of 924 ft/second and kinetic energy at the muzzle of 470 ft-lbs makes this a definitely lethal weapon. The VSS was pleasant enough to shoot. The trigger pull was among the better military triggers, and the recoil was not unpleasant.

Dan’s Take
“I wouldn’t hesitate to consider the VSS or the AS-VAL for an operation in areas that contact is likely to be under 400 meters, and consider that forces who may encounter this weapon should train up on it. After reasonably extensive testing, I have a new respect for this weapon design, and look forward to testing more modern variants. Contrary to claims I had seen repeatedly written that the VSS couldn’t stand up to fully automatic fire, my opinion is that it certainly could, at least long enough to perform more than a few live fire missions. In that case the VSS is an excellent choice as a close-in marksman’s rifle with serious AP capability that can double as an effective SMG for close encounters.”

Phil’s Take
“Although the suppressor system is an older, rudimentary design similar to other Russian offerings, that does not make it ineffective on the battlefield. This system is purpose designed to be a formidable weapons system. While we do not know which came first, the ammunition or the weapon, I suspect that they were designed as a package. The ammunition is definitely specialized to accomplish a specific task, and the weapon is designed to maximize the capability of the ammunition. As a 200-300 meter silent sniper system, it is hard to beat having a highly effective lethal subsonic projectile, outstanding penetration, reliable cycling, and fully automatic capability for when circumstances really go down the tube.”

Tags: 2009, Dan Shea, Dr. Philip H. Dater, V1N3, Volume 1
← Knights at the Museum: The Institute for Military Technology
The U.S. Ordnance M2HB .50 BMG Machine Gun →
Distributed at trade shows worldwide, Small Arms Defense Journal is a bimonthly publication that focuses on small arms, accessories, gear for the soldier, new products, industry news, and defense trade shows. The first issue of SADJ was Spring 2009, which launched at the LAAD show in Rio de Janeiro, Brazil. SADJ (pronounced “sage”) is targeted toward military, law enforcement, and defense industry professionals. Our job is to reach these groups and tailor content to their interests while producing a publication that is applicable to an international audience.