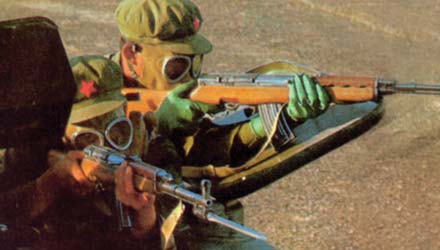 View of the barrel showing the folding bayonet, front sight, plastic upper handguard, the gas regulator and its lock. The cleaning rod normally stored under the barrel is missing.

The trigger groups of the SKS and Type 68 are similar modular designs, and are a variation of the basic design used on the U.S. M1 Garand rifle. The Type 68 has a three-position selector lever located on the right side of the trigger guard. The safe position is marked with a “0”, the semiautomatic position with a number 1, the full-automatic position is marked with a number 2. The stock is inletted in this area aid in the manipulation of the selector lever. The Type 68 trigger group has three sears, an automatic sear is located forward of the hammer and it actuated by the bolt carrier, a trigger sear is located to the rear of the hammer on the right side, the sear operates with each pull of the trigger. A semiautomatic sear is located on the left side of the hammer and functions only when the selector is in the number “1” position.

When the selector is rotated to the “0” or safe position, the selector blocks the movement of the trigger sear, preventing the release of the hammer.

Photo of the Type 68’s gas system components. The component just forward of the stock is the portion of the gas tube positioned directly over the barrel’s gas bleed port, it is permanently attached to the barrel. The dark colored component behind it is the piston’s heat shield.

The Type 68 rifle uses a detachable steel box-type 15-round magazine similar in design to the standard AK-47 magazines. The magazine can be loaded while in the weapon through grooves in the bolt carrier with ammunition on SKS stripper clips, or removed and loaded by hand. The bolt-hold open feature of the weapon prevents the use of a standard AK magazine. If the bolt-hold feature is removed the weapon can then use any 30 or 40 round AK magazine to increase the weapon’s firepower. The magazine catch is placed forward of the trigger guard and is attached to the trigger housing.

The AK type elevation adjustable rear sight is a sliding bar, tangent type calibrated out to a range of 1000-meters, the 300-meter battle sight position is indicated by a Roman numeral III. The front sight is also an AK post type adjustable for elevation and windage.

There are two variants of the Type 68; early models had a forged steel receiver, while later production used a stamped steel receiver. The stamped receiver is easily identified by the presence of rivets on the sides, and is the model photographed for this article. Both models featured a wooden buttstock and were normally fitted with an upper handguard made of plastic. The buttstock has a stamped steel buttplate and is designed to house an AK capsule type cleaning kit, which contains a combination tool, gas port cleaning tool, jag, patch holder and bore brush. A cleaning rod is stored under the weapon’s barrel.

There have been reports of a simplified Type 68 rifle designated as the Type 68/73, but the existence of production models of the weapon could not be confirmed. 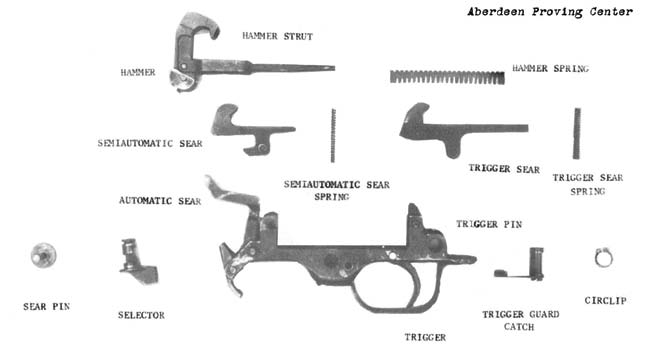 Photo of the disassembled trigger group from the U.S. Army’s Aberdeen Proving Center.

2. Retract the cocking handle and visually inspect the chamber to ensure the weapon is not loaded.

4. Remove the operating spring by pushing it forward to unseat it from the receiver and remove it.

5. Retract the bolt carrier until it is over the disassembly slots in the receiver and lift it upward.

6. Remove the bolt from the carrier by rotating it and pulling it forward.

7. Remove the gas regulator by turning its retainer downward, removing it, and then sliding the regulator forward out of end of the gas tube.

8. Point the muzzle towards the ground and the gas piston and spring will slid out of the gas tube.

9. The top handguard and heat shield can now be removed.

10. The trigger group is removed by rotating the catch located at the rear of the trigger guard.

11. After extending the bayonet, the buttstock can be removed from the barreled receiver.

A special thank you to Al Houde and Beth Crumbly of the U.S. Marine Corps National Museum, Triangle, Virginia.

Tags: 2009, Frank Iannamico, Type 68, V1N1, Volume 1
← SOFEX 2008
Honestas Gemini Target System →
Distributed at trade shows worldwide, Small Arms Defense Journal is a bimonthly publication that focuses on small arms, accessories, gear for the soldier, new products, industry news, and defense trade shows. The first issue of SADJ was Spring 2009, which launched at the LAAD show in Rio de Janeiro, Brazil. SADJ (pronounced “sage”) is targeted toward military, law enforcement, and defense industry professionals. Our job is to reach these groups and tailor content to their interests while producing a publication that is applicable to an international audience.