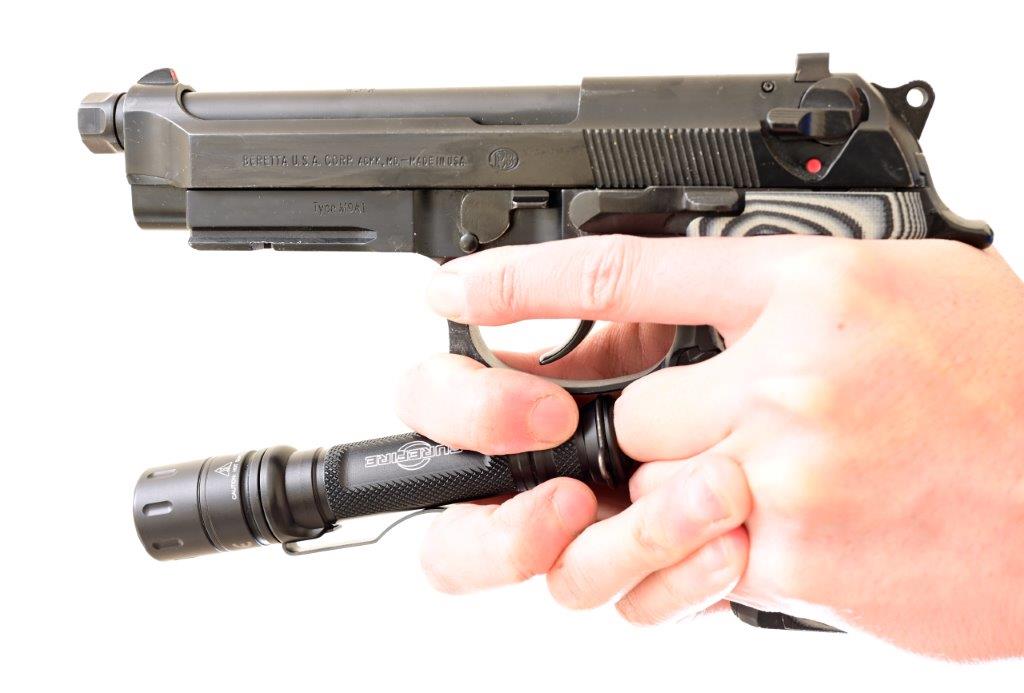 Second Reading of the Basics

Befitting an advanced class, Langdon reviewed the basics at a fast pace. He still provided generous individual attention and feedback that enabled the author to relearn material missed during the 2-Day Tactical Pistols Skills course.

The author discovered his grip strength was still lacking as he could not effectively mitigate recoil as the day wore on. Langdon also observed that the author’s front sights dipped below rear sights as the slide slammed back into the battery. After confirming the use of standard pressure ammunition, he advised experimenting with a lighter 12.5-pound recoil spring in a Beretta M9A1. After these changes, the author observed better recoil management and virtual elimination of front sight dip.

The author also picked up new tips during this “second reading” of the basics. Drawing from the strong-side holster under an open shirt, Langdon related a tip of sewing a flex cuff along the leading edge of the shirt. This helped cover the garment to clear the holster. He also tuned-up the author’s draw, teaching an aggressive sweep with the blade of the strong hand, then pushing the hand down and forward to gain a good grip before withdrawing the pistol from the holster. Langdon also offered similar tips for students using appendix carry.

During reloads, Langdon taught us to tuck our pistol-holding elbow into our bodies. This created a consistent index point and steadied the pistol which is especially important when executing on-the-move. During discussions for slicing-the-pie, Langdon advised an aggressive lean to take and hold a slice, in contrast to the slow sideways shuffle until a shoulder is observed, then lean-out method. The author appreciated learning different techniques so he could choose an appropriate tool for the job. Reviewing material provided ample opportunities to relearn or recall items missed during the first reading. The author found this well worth the price of admission.

Moving while engaging a stationary target is first introduced. Students shot while moving in a circle around a barrel, as well in a figure-eight pattern around two barrels, to experience the importance of fundamentals. Instead of mechanically shooting double-taps, Langdon emphasized shooting individual rounds during rapid fire, complete with individual sight pictures and trigger preps. Failure to do this resulted in misses, as the sights shifted due to shooter movement. Navigating the barrels occupied the conscious mind and tested whether fundamentals were so well drilled that they became conditioned responses.

“Moving target,” using a Bianchi Cup-like setup, is unique to the 3-Day curriculum. Full-sized targets moved at a jogging speed with an estimated 8m opening to engage. The author required almost half of that to present pistol, establish a constant lead and break the first shot. From this, he estimated himself too slow to engage a target dashing across a hallway, and a realistic sideways-profile further reduces hit probability.

Culminating experiences combined both target and shooter movement. Advancing and retreating diagonally to a moving target taxed the author’s concentration. He promptly forgot the appropriate lead and only managed to focus on the sight picture. These exercises provided a good “feel” for the problem and were a fun way to test fundamentals.

Langdon focused on handheld lights as they are an essential tool for searching and assessment. Although some police and citizenry equip their pistols with weapon-mounted lights (WMLs) for easier shooting, one cannot muzzle sweep every unknown while searching. Thus, handheld lights are a common denominator between the two activities.

When searching, Langdon prefers the FBI technique where the light is held high to one side and forward of the body. This creates separation should a threat shoot the light, as it is often the only thing visible. Also for this reason, light should be used judiciously. With the threat identified, Langdon advocates continual illumination to pin the target. If the light is turned off, the threat is likely to shift position.

Langdon also emphasized the need for WMLs to activate with absolute certainty; indeed, one such failure occurred during class. With the premise of identification using handheld light, the author found no satisfactory method of activating WMLs without discarding the handheld light as he drew and discharged his pistol. As such, the author found handheld techniques useful as both a backup (in case a WML fails) and as a primary technique as the situation dictates.

Since most handheld shooting techniques are essentially one-handed, strong-hand-only skills form the fundamental building blocks. Langdon presented multiple techniques, then encouraged students to try different ones under different lighting conditions to find ones they liked. The author’s experiences are presented below.

The Harries Technique is stable, though it quickly induces fatigue. The SureFire (or Rogers) Technique requires unshrouded tailcaps (e.g., the SureFire Tactician); the author’s trigger finger scraped against his support hand fingers. Angling the light downwards solved this, but it compromised both lighting and recoil management. The Graham Technique proved unworkable in live fire as recoil caused the author’s hands to separate and turn off the light. Significant pressure could overcome that, but it would activate constant-on for “clicky” tailcaps and discomforted knuckles. Neck Index Technique is favored by Langdon as it naturally aligned the light with target, but glare from the pistol or one’s clothing can detract from the sight picture. Although there is self-illumination, it is not as important a concern in shooting as in searching. The author also tried the FBI technique as he figured no reason to reposition the light when transitioning from search to shoot.

FBI technique has challenges when leaning around corners.

To simulate urban lighting with some artificial lights, students shot during twilight without illumination. In this exercise, Langdon mentioned that a line of drifting impacts were not unexpected. Muzzle flash acts as a flashbulb, searing the sight picture into the brain. Thus, one might be convinced of a proper sight picture despite it having drifted.

To practise with handheld lights, targets were illuminated from different directions. Shooting one at a time, each student could evaluate his own equipment and technique. Absent that, the author would never have realized his light was turning off under recoil with the Graham Technique. Langdon gave valuable instruction and freedom for students to experiment.

Shooting a moving target while advancing/retreating at a 45-degree angle.

Most training courses, formal or otherwise, merely exercise students’ shooting skills. Langdon inserted drills requiring cognitive function to demonstrate how decision-making can slow down the process. Four targets with different shapes and numbers were presented, and students were asked to shoot the appropriate one by associating it with a topic posed. If “middle-aged” was the topic, a student might shoot a target containing the number “40.” Another exercise was the Casino Drill where one must shoot the appropriate number of shots on the appropriate target. These exercises helped the author discover which of his fundamental skills were not yet practised enough to be conditioned responses.

Use blade of hand to aggressively sweep away garment.

Ernest Langdon proved to be as personable and accessible as he was during his 2-Day course. The author, being an engineer by trade, found that Langdon’s analytic approach helped with material absorption and helped the author make educated choices in equipment and technique. The author highly recommends this course.