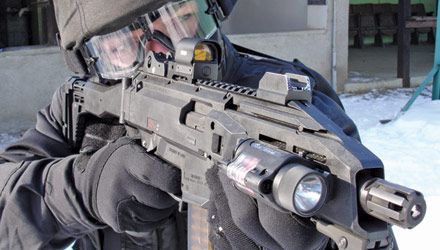 The 3rd Generation: From the vz. 61 Skorpion Submachine Gun to the CZ Scorpion EVO 3 A1 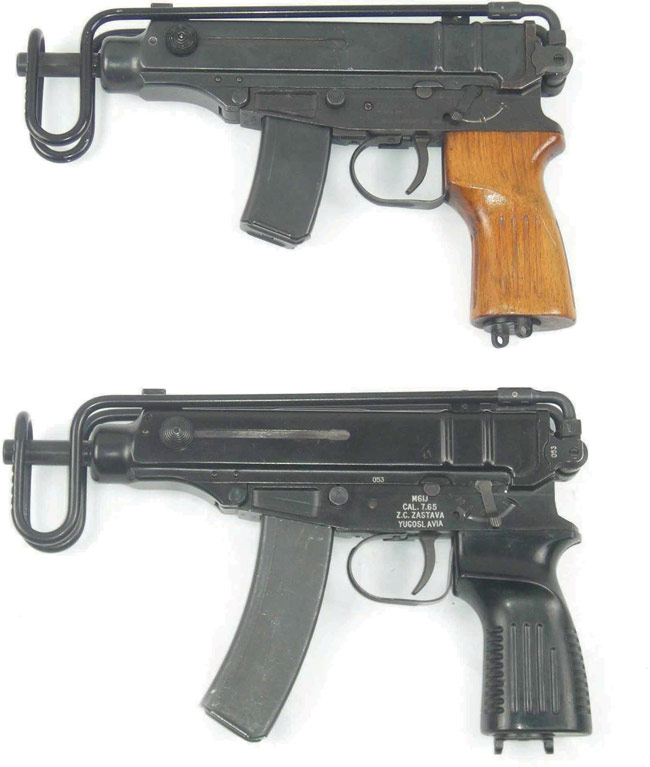 Most of the specifications originally requested by the Ministry of Interior were exceeded.  On the whole, the maximum requested weight was kept (the limit was exceeded only by less than 10 grams /0.35 oz.), as well as the overall length with folded stock (with difference being only 20 mm /0.78 in.) and the height (difference of 17 mm /0.66 in.).  With the stock unfolded, the final model measured 522 mm /20.5 in. instead of the required 440 mm /17.3 in. – a size which was quite unrealistic.  Still, many users of the vz. 61 consider the weapon too short and for achieving a better sight picture, some of them are supporting the buttplate against their cheek.  Thanks to the well-chosen bore the effective range of fire was extended up to 150 m, obviously when shooting with the stock extended.  The magazine capacity has been met as required – the Skorpion in 7.65mm Browning (.32 ACP) has a 10 round (curved) magazines for carry, (the standard accessories of each weapon has one) and a 20-round magazine (the standard accessories has four).

Although the Skorpion may seem quite subtle, the development and tests were in fact carried out in accordance with the most stringent military methods that also made a contribution to the exceptional durability and reliability of the submachine gun.  The weapon excels in quick and easy disassembly, thanks to the Czechoslovak engineering school.  However, in this case Rybář could not hide his rather civilian thinking, so one should be careful for the possible loss of the small cocking knobs and the hammer stop pin that have a tendency to fall out.

Weapon Designed Not Only For The Czechoslovak James Bond
The Skorpion gradually developed into the form of a compact automatic weapon suitable for the police and the army; nevertheless it still accentuated its ´special´ character.  This relates in particular to the above mentioned rounded cocking knobs on the sides of the receiver.  Due to this feature the weapon is a very compact one and allows shooting to be conducted very close to the body, from under  clothing or even from a case, which was an explicit requirement from the Ministry of Interior.  Intelligence units were also taken into account when the Ministry requested reliable operation with commercial versions of 7.65mm Browning (.32 ACP) cartridges.  It was often said that “the 7.65mm cartridge is routinely produced in both socialist and “so called” capitalist countries and are available in any shop carrying sports and hunting firearms.”  Required accessories further included the already mentioned shoulder holster (for carrying the weapon overtly a belt holster was used) and a newly designed sound suppressor.

The Skorpion was unique also because its adoption for the service in the Ministry of Interior forces under the designation “7.65mm samopal vzor 61 (Škorpion)” was approved in 1961 directly by the Central Committee of the Czechoslovak Communist Party.  The Skorpions were primarily intended for “special units” of the State Police, but gradually became standard equipment of all law enforcement units subordinated to the authority of the Ministry of Interior.  The Skorpions continued to be used by the Czech and Slovak Police forces, though to a lesser extent than before.

The Czechoslovak Army was supplied with the Skorpions in a relatively large quantity. The weapon was assigned to ‘specialists’, i.e. selected reconnaissance, guard and special forces. However, the Czechoslovak Army never issued a decree introducing the Skorpions into the official armament lists. Nevertheless, the Czech and Slovak armies still list the vz. 61 Skorpion in cal. 7.65 as their standard equipment.

The Penal Institution Units, restructured to the Prison Guard in 1993, which are under the administrative authority of the Ministry of Justice, have also been an important customer, though not in terms of quantity, and use the Skorpion even today.

There was much speculation concerning supplies to friendly pro-communist regimes and also to various terrorist groups (for them the Skorpion was almost an ideal weapon). There are  no doubts regarding the export and licence sale to the former Yugoslavia.

A pre-production version of CZ Scorpion EVO 3 A1 with two short magazines clamped together.

Production
The serial production of the vz. 61 Skorpion submachine gun in caliber 7.65mm (.32 ACP) was assigned to the current Česká zbrojovka a.s., Uherský Brod, who were not excited by this project at all.  It was no easy undertaking since the new arm was technologically much more complicated than the vz. 58 rifle manufactured in the factory.  Moreover, the Ministry of Interior originally ordered only 12,000 pieces, which could – even in the centrally planned economy of the time – negatively affect the profitability and the economic balance of the factory.  However, before the factory management could come up with any objections and concerns, the order was increased to 70,000 pieces and further business negotiations continued.

Production of the Skorpion commenced in early 1963. Besides the Czechoslovak Ministry of National Defense, the weapon was also ordered by the Ministry of Foreign Trade, which would export well-nigh 100,000 pieces of the Skorpions by 1966.  This was followed by a few years of downtime.

Skorpions returned into the production program of the factory in 1973 after they had gone through a series of minor technological adjustments.  The Skorpion from later production batches are easily recognizable since their surface is protected by a gray baked enamel.  Overall, almost 55,000 pieces were produced during the second phase of the serial production between 1973 and 1976 and they were primarily manufactured for the Ministry of Interior, and in large quantities for export.

The third and the last phase of their production covered the years 1978 and 1979 when the factory produced over 45,000 Skorpions.  Almost 30,000 pieces were delivered to the former Yugoslavia, which also negotiated a license to manufacture the submachine gun.  Most of the remaining Skorpions were intended for export.

After the fall of communism in 1989, the newly privatized Česká zbrojovka made great efforts to introduce the 7.65mm Skorpions to the newly opened markets, presenting the weapon in many venues.  Between 1992 and 1994, the factory manufactured a small series of Skorpions; this nevertheless represented the swan song of the weapon.  The sophisticated technical solution of the Skorpion (known as the vz. 61 E after 1989) was still admired, but an automatic weapon in 7.65 Browning (.32 ACP) was already a matter of the past.

Other Variants
The weak point of the Skorpion was its low-powered cartridge.  Mr. Rybář knew it very well and started, immediately after the basic vz. 61 version had been completed, to design new variants chambered in more powerful calibers.  By 1968, he introduced the vz. 64 Skorpion in 9mm Browning Short (.380 Automatic), the vz. 65 in 9mm Makarov and, finally, the more robust vz. 68 in 9x19mm Luger.  The first and third versions were intended for potential export (though there was no particular demand).  The vz. 65 represented the first attempt to equip the Czechoslovak national army with a compact, automatic firearm using new, standard Soviet (9mm Makarov) pistol cartridges.  Nevertheless, none of the above mentioned projects continued after prototypes had been developed. 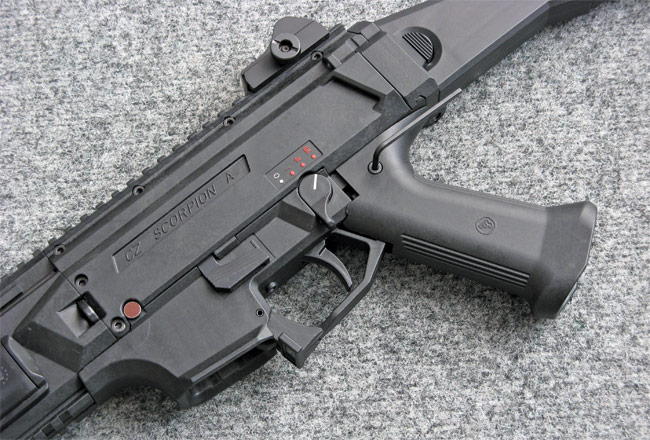 The pistol grip is horizontally adjustable; the shooter needs only loosen the socket head screw on its upper side with the handle from the basic accessory.

Mr. Rybář suddenly died in December 1970 at the age of 46, succumbing to heart failure.  His concept of an original, compact automatic handgun was still embraced by others:  In the late 1970s and early 1980s, Rybář’s colleagues from the research and development centre in Brno, supervised by Mr. Čermák, elaborated his concept into what was later known as the vz. 82 submachine gun in 9mm Makarov – a sort of counterpart to the new vz. 82 service pistol – with several more or less substantial technological adjustments and improvements which eliminated practically all the flaws of Rybář’s original solution.  The most interesting element of the new Skorpion consisted in its telescoping shoulder stock that could be unfolded into an open position.  However, not even such modernization helped the Skorpion to be introduced into mass production and its development ended up in the phase of samples.

After 1989, Česká zbrojovka returned to the concept of the Skorpion in other calibers and developed its own original versions of the vz. 82 in 9mm Makarov and vz. 83 in 9mm Browning Short (.380 Auto), which were conceptually similar to the vz. 65 and vz. 64, but, unfortunately did not turn out to be attractive for the market.  The company also tried its chance by developing the self-loading Skorpion pistol for civilian use, also designated the CZ vz. 91 S.  To make the Skorpion available to civilians by eliminating its ability to fire in bursts represented a groundbreaking idea in the former Czechoslovakia, but unfortunately it did not gain enough support.  Relevant authorities refused to license the weapon, later on in 1995 the legislature made such attempts impossible for introduction to the civilian market.

And the phenomenon that the potential of the fifty years old Skorpion is still not exhausted is also evidenced by the fact that Česká zbrojovka launched in 2011 onto the civilian market a semiautomatic version under the name CZ Skorpion 61 S in 7.65mm Browning (.32 ACP).

The Second Generation
The Skorpion in 9mm Luger was not forgotten either – just the opposite.  In the late 1990s, after several other concepts of compact, automatic handguns had been tested, Česká zbrojovka decided to start up a substantial modernization of the original vz. 68 model.

The final product, CZ Skorpion in 9×19 differed from the vz. 68, designed by Mr.Rybář, only in small details; the most important being that its pistol grip and stock were made from polymer instead of wood.  Further improvements of the Skorpion ensued: a small production series, introduced into the market in 2003, was even more sophisticated and included a mounting rail under the front part of the receiver.  This was a major improvement since it enabled the user to mount a front vertical pistol grip, among other things.  The absence of grip elements for the non-shooting hand was not perceived to be a major issue in the Skorpions in low-power calibers; the most important aspect of the weapon was its exceptionally small size and compact design.  Its low weight and the effective rate reducer made it easy to hold the weapon by its magazine or somewhere next to it, or by its wire butt which was protruding under the barrel when the stock was folded.  However, this was not the case of the 9mm Luger model.  When shooting bursts, the Luger caliber is livelier, noisier and heavier than its predecessors, but still perfectly controllable thanks to an overall higher weight and a spring-loaded insert in the rear part of a somewhat heavy breech block, which slows down the bolt’s opening and reduces the recoil felt in the front and the rear part of the stock.  A firm grip by the non-shooting hand improves the control of the weapon in any event, thus facilitating smooth handling in combat.

The development of the CZ Skorpion in 9×19 finally resulted in the ‘embellished’ XCZ 868 prototype in 2005, which represents the biggest achievement in the development of the second generation of Skorpions.  The weapon successfully combined Rybář’s original concept with state-of-the-art ergonomic features, such as the new, telescoping shoulder stock, the polymer pistol grip at the angle of 18 degrees, and the removable front vertical grip.  Following the current trends, the receiver was equipped with mounting rails in two levels, according to Mil-Std 1913.  Standard accessories included a reflex sight, a tactical light, an efficient sound suppressor and a three-point sling.  The unique feature is a tactical adapter with a combat knife.  There were even some discussions to develop the weapon also in .40 S&W.