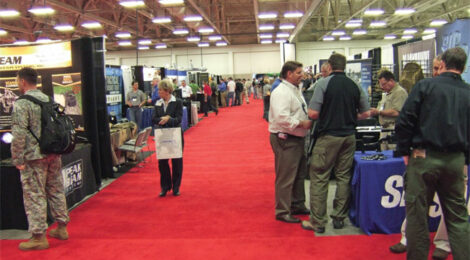 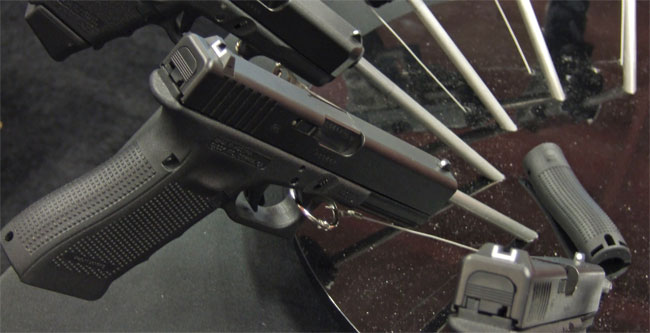 Tony Musa of Glock made sure that attendees did not bypass the Gen4 as just another Glock. The system features a dual recoil spring and ergonomic improvements that may seem the norm in the industry, but radical for a gun coming from Glock.

Since 2006 there has been a small but efficacious little defense show held in Fayetteville, NC, home of Fort Bragg and the U.S. Army Special Operations Command (USASOC).  The SpecOps East Warfighter Expo, held congruently this year with the Special Operations Symposium at Fayetteville’s Crown Convention Center, brought fifty-five defense industry exhibitors under the same roof as troops, representing the “tip of the spear” in the current global struggle against terrorism providing for an ideal environment of casual networking without the chaos or crowds of a larger venue like the SHOT Show.

Present and Accounted For
With fifty-five vendors in a show designed to cover the entire array of Special Operations mission sets, it was pleasing to find that the small arms industry had some visibility.  Some of the big players like Colt and FNH were no shows, but the time was redeemed well with industry regulars like Sabre Defence, Rock River Arms, and Glock as well as some less familiar faces who were showing some impressive products.

Sabre Defence
Sabre’s exhibit was eye catching this year with guns on the table that just weren’t quite the same as the ones I had seen in the past.  Those who are familiar with Sabre Defence will recall that not only are they one of the number of manufacturers of AR-15 type platforms, but they are the only “small” privately held company to hold DoD contracts for M16 rifles and they even produce barrels for the M2 .50 cal. “Ma Deuce” on government contract.  They produce quality products. 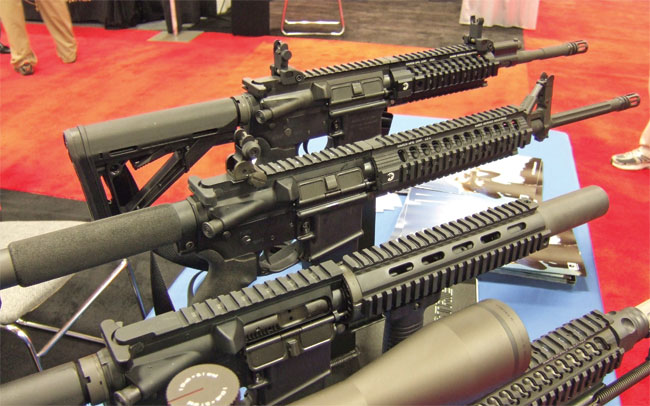 So what was on the table out of the AR norm? First, the Sabre Defence Designated Marksman Rifle (DMR) chambered for the 6.5 Grendel cartridge.  It’s no surprise to see such a configuration, as Sabre’s Dave Power explained to me, since Sabre is a barrel supplier to Alexander Arms, the flagship company of Bill Alexander, the father of the 6.5 Grendel round.  The rifle itself is in its first year and is available in barrel lengths of 14.5, 18, and 24 inches.  The twist rate is 1 in 7.5 inches and the barrel itself is chrome lined in typical Sabre fashion.  The system has some undeniable potential.  6.5 Grendel itself is supersonic out to 1,000 yards in some loads and platform configurations, and is a notoriously flat shooter.  Only time will tell just how this system is received.  Rumor has it that it saw some use in the USASOC/JSSOC sponsored shooting match held recently but details are not forthcoming.

As Dave Power discussed the DMR, two business partners from Adams Arms, James Granger and Aloysius Donovan approached eager to show the Adams Arms joint venture with Sabre Defence: the Sabre Gas Piston Rifle.  The platform is much like what any industry regular would expect, a gas piston solution to the problems encountered in a standard AR type direct impingement (DI) operating system (an alternative M4 type operating system).  Having been exposed to quite a few piston operated AR based platforms in recent years it’s quite easy to follow the evolution taking place in the designs and separate the well thought out products from those that are immature, or problems waiting to happen.  As explained to me by James Granger, the Sabre/Adams system bears the trademarks of engineering, testing, and design work that one would expect to see in a half decade after the type appeared on the scene, taking into account the different obstacles and problems known to be common in piston designs and incorporating material solutions to counteract them.  Some notable operating features include:

The Sabre Gas Piston Rifle is currently intended for more than commercial success; Dave Power acknowledged the system is in fact the current Sabre/Adams vision for the Army’s M4 Improvement Program and the up and coming Carbine solicitation.  It is wise to keep a close eye on this system and product.  The Sabre Gas Piston Rifle is a unique “from scratch” design and a joint venture between Sabre Defence and Adams Arms.  It should not be confused with other piston upgrades available from Adams Arms. 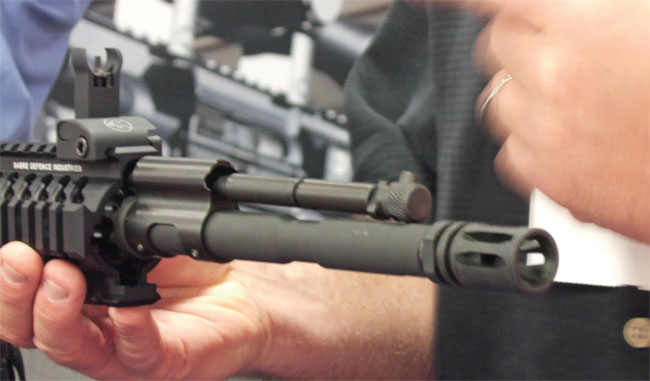 Rock River Arms
Mark Hanssen at the Rock River Arms (RRA) table bore an air of enthusiasm that was quite uplifting; he was speaking while holding RRA’s new rifle before a crowd of interested Special Forces attendees.  What is it called?  For now it seems to simply be “Prototype Rifle #01”.  This gun is a serious departure from the conventional AR.  It is small, compact, and has a side folding stock.  The charging handle is ambidextrous and moved to the forward part of the weapon over the barrel.  As for the buffer tube, well, there isn’t one.  This gun would make a great PDW or compact carbine once proven – the size-to-performance ratio being achieved through several departures from conventional AR designs as follows:

A redesigned recoil spring.  The new spring looks familiar in concept to other firearms, but is radically different than the typical AR buffer spring.  It is fully contained in the upper receiver and allows for elimination of the buffer tube all together allowing the use of a side folding stocks: a handy thing to have where a compact individual weapon provides a useful platform in vehicle and Airborne operations, MOUT/FIBUA, cave/tunnel clearing, along with a myriad of other uses that require the improved ergonomics that come with a small package. 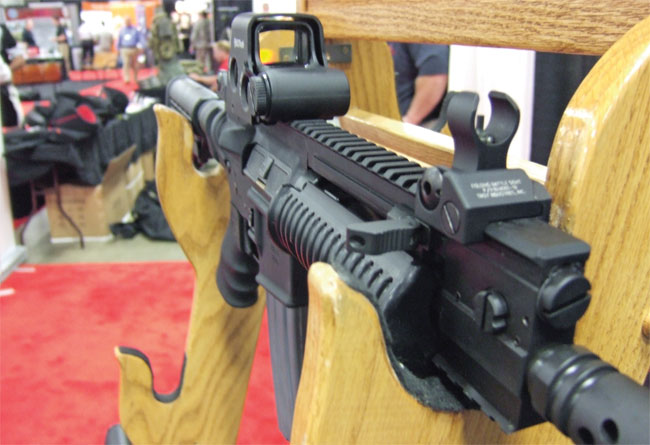 Rock River’s prototype features a forward ambidextrous charging handle located over the barrel of the weapon system which operates independently from the standard rear AR-15 type charging handle (which has been retained in the design). The dual charging handle design will help prevent muscle memory mishaps from veterans institutionalized on the standard AR platform.

A shortened bolt carrier.  This is a reminder of the old ZM design and is necessary to achieve buffer tube elimination.  This comes with a classic problem however; how do you trip the auto sear with a bolt group that is half the length?  Currently you don’t, but that doesn’t mean this nut won’t be cracked.

There is no real performance data on RRA’s new gun as of yet and I speculate the verdict will not be out for some time.  One thing is certain, it is refreshing to walk even the smaller shows and see the flurry of innovation that is occurring in the area of individual weapons.  It’s not just the big kids of the small arms industrial base that are bringing new concepts and designs to fruition.  Prototypes are appearing here and abroad in what seems to be record numbers; a sign of a healthy industry and of governments that are recognizing it is time to turn a page and bring new hardware into service.  As for the American market, the U.S. Army Carbine solicitation we’re all waiting for should make for some tough competition.

Glock, Inc.
Glock was in attendance with the highly publicized “Gen4” model.  Touted in a number of publications quite a bit lately, but as Glock’s Tony Musa put it, “these are the most changes to a Glock in a really long time,” which in itself merits that it be readdressed.  Gen4 is nice; fired earlier this year at SHOT Show, it handled well and the claimed improvements in my opinion are realized.  There is no secret to the reengineering to the platform, the most radical of which is the redesigned dual recoil spring which produces a 10% reduction in felt recoil, but also your industry standard features such as interchangeable back straps and a true fully reversible/ambidextrous magazine release lever.  There are a couple of things that should be noted: the Gen4’s dual recoil assembly is not interchangeable with any other pre-Gen4 Glocks.  Furthermore, the laws of physics just won’t allow the previous generation Glock magazine to interchange in the Gen4 frame when configured for a left side magazine release as the mag body does not possess the magazine catch on the left side like the Gen4 upgrade (righties are in the clear).  This all said, most interesting is the Gen4’s extended life cycle claims as they do not stem solely from the dual recoil spring assembly as Musa explained; the small springs in the gun have also been “revamped” for improved life expectancy and durability.  This is all pretty impressive for a legacy firearm that possesses such a record for longevity and by this time next year I expect some end-users will have put the Gen4 to the test and there will be plenty of data to sift. 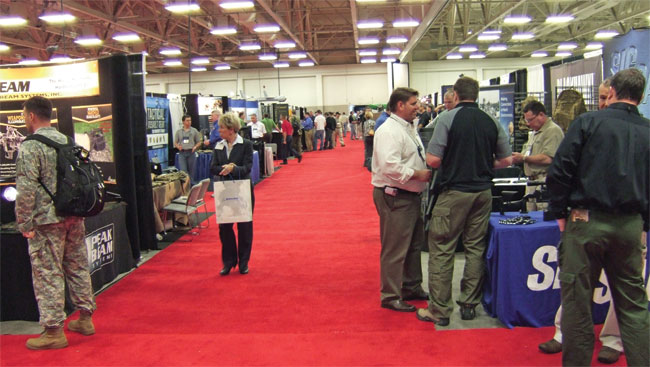 Peak Beam
Whenever one thinks of weapon lights, names like Surefire, First Light, and Stream Light come to mind, but Peak Beam was a new one and needed investigation.  Peak Beam’s Maxa Beam MBPKG-WM-AX3S CSWL is their flagship product and is designed to answer the need in the critical area of crew served weapon lights, particularly for the M2 .50 cal. machine gun.  Weighing in at 4.5 pounds and requiring a power supply with a NATO slave receptacle or two BA5590 lithium rechargeable batteries (as used in the ASIP radio) this ruggedized system may not be the right choice for the M4 MWS, but has all the features needed for a weapon light small enough yet powerful enough to exploit the potency of a crew served weapon like the M2 BMG.

The current CSWL is a Gen II development of the original Maxa Beam CSWL and has been enhanced to meet certain requirements established by the U.S. Army.  The system utilizes the standard M1913 Picatinny type rail mount adapter and must be coupled with the MBA-ATSSMKVIII rail adapter for the M2 machine gun.  Other standard features include a lockable IR Filter, shock-resistant lens and lamp (1,500 hours service life), and a control toggle that allows for full off/on mode operator control.  The lamp itself is powerful and you would certainly not want to look straight at the beam as the system is capable of generating 12,000,000 candle power with a white light visibility out to 3,500 meters (1,400 IR).  Furthermore, this light will grab the attention of just about anyone with its strobing feature, which gives the operator the ability to use the CSWL as a non-lethal visual device and hopefully dissuade the complacent war zone civilian from inadvertently driving up too close to the business end of a light bearing M2.

The End State
Lodestar’s SPECOPS East show may not be very large as shows go, and certainly not an all out small arms expo, but it has merits as a tiny venue that serves the warfighter first and foremost.  Any military or industry personnel that can make it down to Fort Bragg for the event might well consider it as a premier venue that hosts the very best audience our country can furnish in an atmosphere that is conducive to one-on-one relationship building.