ABOVE: Korean made K2 tank driving demo. Armed with 120mm smoothbore cannon and up-to-date electronics, this 55t tank is one of the best main battle tanks in the world. (PLATOON magazine)

ADEX (Aerospace and Defense Exhibition) is South Korea’s most prolific defense expo; it originally began as the Seoul International Air Show in 1996. It soon merged with other defense exhibitions and became Korea’s primary defense trade show. This year (20~25 October 2015), it had 386 exhibitors from 32 countries, 1,580 booths, and more than 260,000 visitors (79,291 trade visitors included) came to see the show during its whole-week exhibition.

Since its root is as an airshow, the major focus has been on aerospace products, especially jet fighters; but it virtually has almost all Korean defense-related companies on exhibition. It also has significant numbers of large equipment displays, mainly from the Korean armed forces. 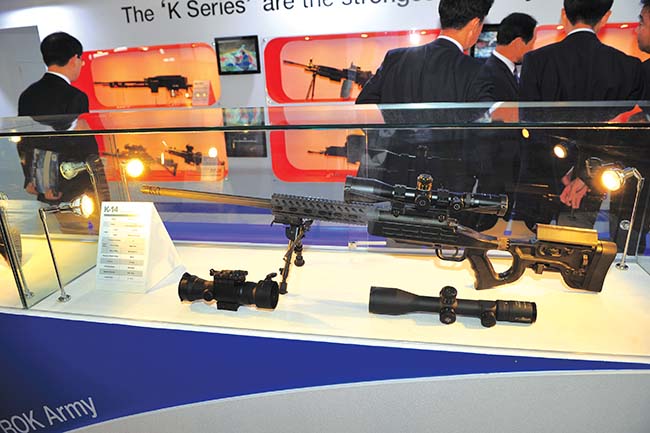 While many defense-related companies showed their products, the small arms industries had relatively little on display at the exhibition but what was there was interesting. The show itself is the ‘Airshow’, and since Korea’s military small arms acquirement from foreign countries are very limited (at best, a few hundred military small arms are imported annually, and sometimes this dropped to a few dozen per year), it’s not easy to see major foreign firearms companies presenting their products in ADEX. This writer only remembers a few times during the late 1990s to early 2000s that H&K presented an independent booth to show their products (during that time, Korean special forces bought considerable numbers of their guns due to the 2002 soccer World Cup security), but has no knowledge of other major firearms companies doing the same things.

But that doesn’t mean firearms have not been exhibited; S&T Motiv, virtually the single manufacturer of ROK (Republic of Korea) military small arms, has been there since the beginning. They produce an average tens of thousands of rifles and other firearms for ROK forces- and they always have a booth at ADEX. Therefore, you can see their most recent products, and many are usually not seen
outside of Korea.

S&T Motiv’s most recent developments are the K14 sniper rifle and the K12 Medium Machine Gun. Both are 7.62x51mm NATO caliber, and while the K14 is a bolt action sniper rifle, the K12 is a gas-operated machine gun based upon the K3 machine gun; thus K12 can be said to be a Korean version of a “MAXIMI”. 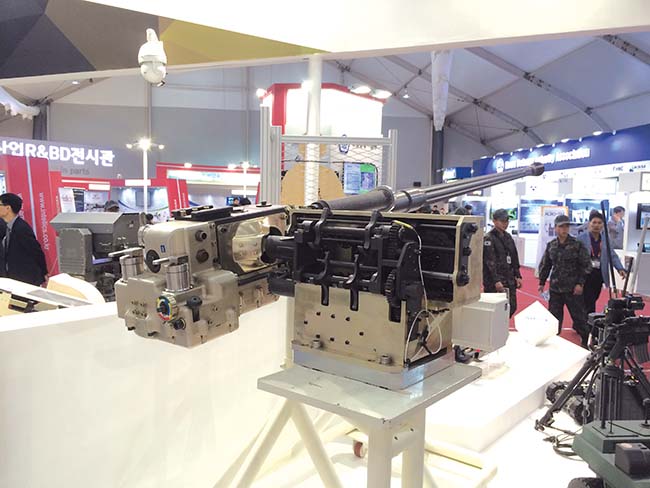 This year, they added the XK-12C1 to their products lineup. This is a co-axial version of the K-12, with a heavier barrel and a solenoid trigger. You probably can see some similarity with old M60C, and this is natural; S&T Motiv had license-manufactured the M60 lineup, and is still making spare parts for them. While not adopted by Korean armed forces yet, there’s quite high probability of K12 being adopted in the near future, since ROK forces have literally thousands of tanks and armored vehicles with co-axial M60Cs. Many of them are close to their operational age limit and will soon be replaced.

Also new at S&T Motiv’s display was new ‘light machine gun.’ S&T Motiv is making the K3 squad automatic weapons, which are very similar to the FN MINIMI. Many of them have been used since the early 1990s and need replacement- and, the reputation of K3 is not that good in Korean forces (many early made guns had some reliability issues). ROK forces are now trying to obtain new LMGs to replace their K3s, and S&T Motiv is trying to get this contract by developing an advanced version of the K3, or the ‘new light machine gun’.

While based upon the K3, the new LMG from S&T Motiv has a side-folding buttstock (adjustable), integral MIL-STD-1913 rail on feed cover, detachable side and under MIL-STD-1913 rails, carbon fiber heat shield over barrel, improved muzzle brake/flash hider and folding iron sights. Also, engineers of S&T Motiv says its feed system has also been upgraded. This new LMG also has a shorter variant, which is basically a ‘Para’ version, very similar -in concept, design and spec- to the MINIMI Para. 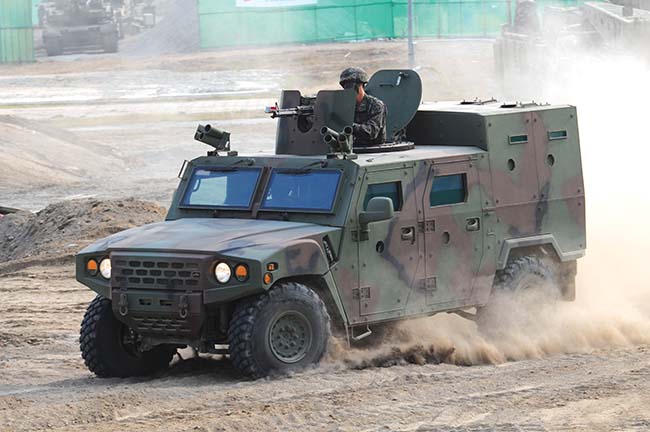 KM1 tactical vehicle, inspired by the armored Humvee, developed by KIA motors. It will be used by ROK armed forces as armed recon-security vehicles. (PLATOON magazine)

The K14 rifle also showed some improvements. While basically the same as previous versions, the new version features detachable side rails, and also will have Korean-made optics, which would replace the Schmidt & Bender PM optics on current versions.

Another thing S&T Motiv showed was new XK9 SMG. Based upon the K7 suppressed SMG now used by ROK special forces, this is simple blowback operated 9mm SMG, using 9mm Colt SMG mags. It’s still a prototype, but has the potential of an inexpensive 9mm SMG with a polymer structure.

While S&T Motiv is still the dominant power in Korean small arms manufacturing, there’s an interesting challenge. Dasan Manufacturing, which has made firearms parts for a long time, is now trying to become a competitor of S&T Motiv; they set up a new firearms assembly line recently and are trying to penetrate the military firearms market in Korea, which is dominated by S&T now. 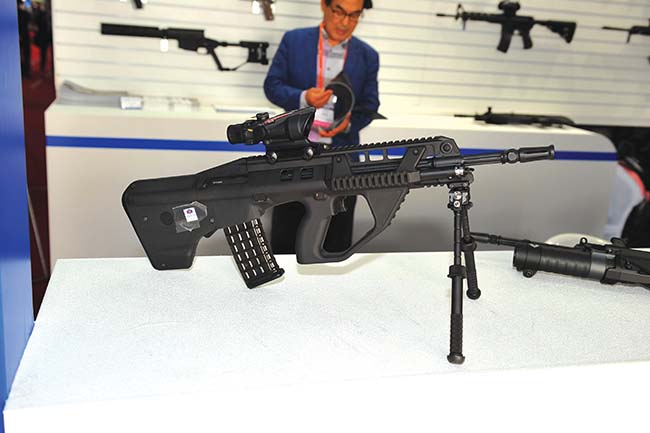 Dasan manufacturing displayed the Australian F90 rifle, which will soon be manufactured under license by Dasan. (PLATOON magazine).

Korean law only permits a ‘designated manufacturer’ to mass-produce and supply military small arms (imported military firearms are almost exclusively limited to special purpose ones, like MP5 SMGs or P226s to the counter terror units), and for a very long time S&T Motiv was virtually the only designated manufacturer. But Dasan will become a second such designated manufacturer, and the armed forces actually expect some advance in quality and price due to these two companies’ competition. Nobody can predict how Dasan will end up, but surely the situation in Korea is changing.

While Dasan still has no original models of their own, they are producing virtually all AR and 1911 parts for exports; now AK parts are added to their lineup, including a stamped AKM type receiver. The ones they exhibited were actually assembled from their parts, excluding furniture (you can see the MAGPUL furniture and magazine). Also, Dasan showed a receiver and hand guard of the UAE’s Caracal sniper rifle, which was actually supplied from Dasan to show their capabilities.

One interesting thing Dasan showed was Thales Australia’s F90 rifle. Dasan made a contract with Thales and will soon be manufacturing this rifle, under license, in Korea. Dasan will be suggesting this rifle to Korean military, which is now considering replacement of the K1 and K2 rifles, which have been used since the early to mid-1980s and many of them now need replacement. Unlike the K1/K2 rifles, which basically are made with 1970~80s design concept, the F90 is a modern bullpup, so in terms of modernity this clearly has an edge. Nobody can be sure of how this can work with the considerably conservative ROK forces, but the very fact there’s a Korean competitor to S&T Motiv alone can be a very interesting factor in the Korean arms procurement scene. 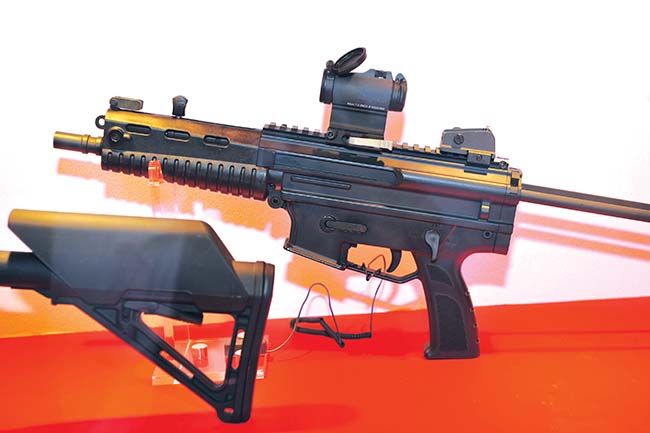 Most other things are far from ‘small arms’, such as missiles, tanks, fighters or very sophisticated electronic systems. There’s one thing for sure for the infantry; Hanwha’s next generation infantry anti-tank rocket is exciting. Still under development, this is similar to recent developments from Israel and other countries. The Rocket launcher itself (caliber approximately 100mm) is disposable and similar to the Swedish AT-4, but the mounted optical sight is actually an electro-optical fire control system, which has digital computer and laser rangefinder. With this, even with an unguided projectile, it may be able to have a very high first round hit probability up to 1,000m. Armor piercing capability is not known, but maybe more than 800mm (against RHA/90 degree).

One other thing deserving coverage is the ADD’s (Agency for Defense Development: Korea’s government agency for developing defense-related technology) 40mm CT (Case Telescopic) cannon. CT’s concept is already well known and will soon be fielded by the Brits on their infantry fighting vehicles; ROK is also developing very similar one, and will soon be complete and mount it on one of their armored vehicles. 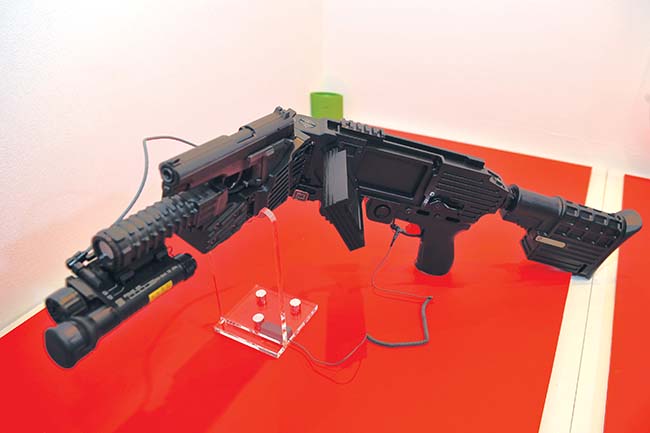 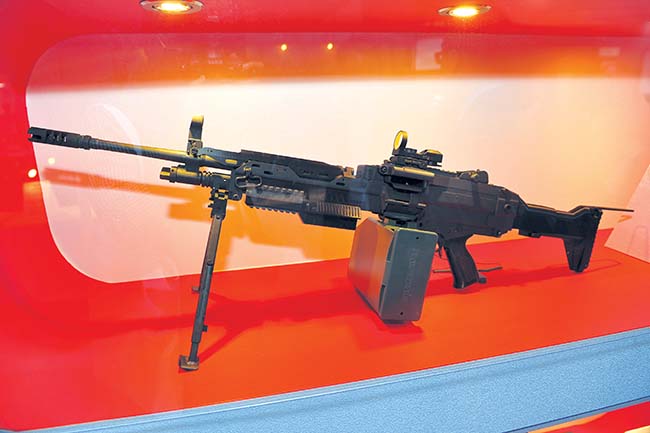 S&T Motiv’s new LMG, which is basically a modernized K3 SAW. S&T Motiv is expecting this would replace many aging K3s within near future. (PLATOON magazine) 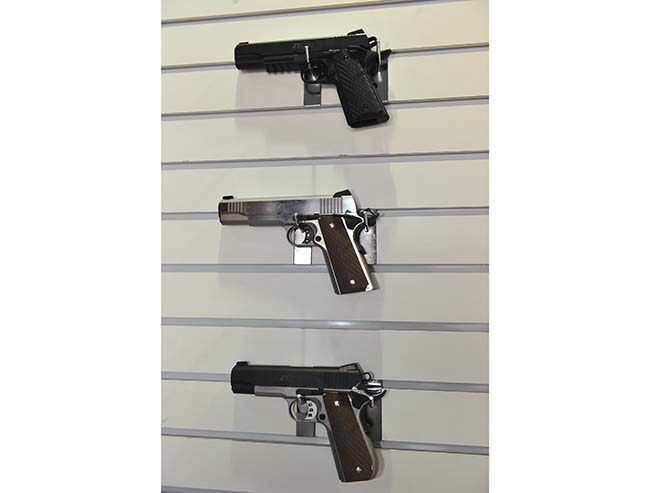 An AR-type rifle displayed by Dasan, which has most of its parts manufactured by Dasan themselves. (PLATOON magazine) 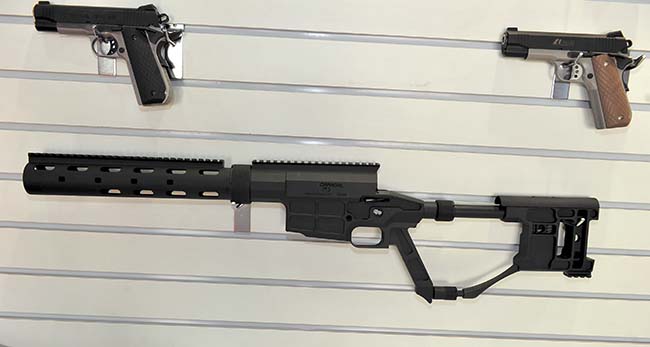