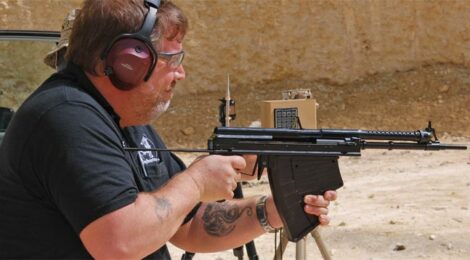 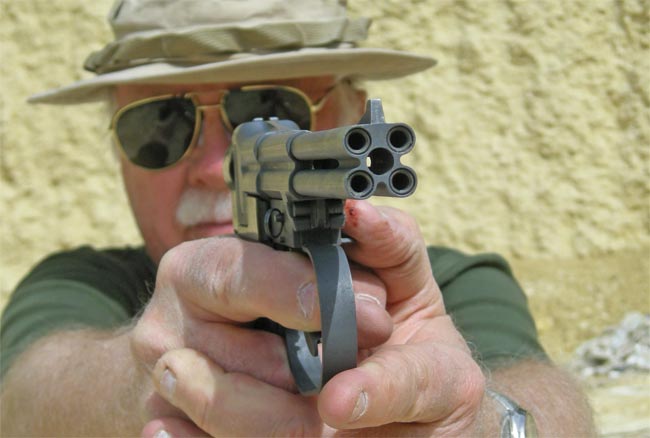 Many of us remember the finale in the 1965 movie Thunderball when James Bond and his allies battle Emilio Largo, the evil Number Two of SPECTRE (SPecial Executive for Counter-intelligence, Terrorism, Revenge and Extortion), and his cohorts, in the massive underwater battle scene where the main battle implements were knives and elastic powered or compressed gas spear guns.  Though that book, film and battle was fictitious, war beneath the waves isn’t.

Surprisingly, these are not new weapons as they were developed and put in Russian service over thirty years ago.  They are excellent examples of the secrecy that surrounded the Soviet Union and were unknown, even at classified levels, in the West until Tsniitochmash began offering them publicly in 1993. 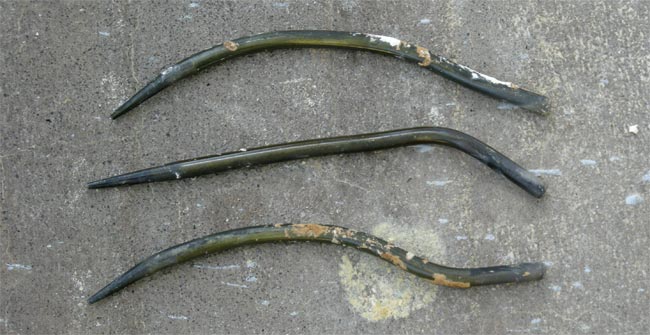 The results of firing in the air instead of underwater. The darts are destabilized rapidly and tumble, striking the target on the flat or folding into it. Very lethal, but not very accurate. (Dan Shea)

4.5mm SPP-1M Underwater Pistol
Developed in the late 1960s at the request of the Soviet Navy and accepted in 1971, the 4.5mm SPP-1 (Spetsialnyi Podvodnyi Pistolet – Special Underwater Pistol) was designed to arm combat divers (frogmen).  Later, the SPP-1 was upgraded to the SPP-1M that was basically the same pistol but had an extra spring above the sear to improve trigger pull and had a larger trigger guard to accommodate the use of diving gloves.  It is still in use by Russian Navy Special Forces.

The SPP-1M underwater pistol is a manually operated handgun that consists of four smoothbore barrels grouped in a square cluster.  The barrel cluster is hinged to the frame just in front of the trigger guard and breaks open in a similar fashion as a break-open shotgun.  There is a single striker (firing pin) and the double action firing mechanism fires one cartridge sequentially each time the trigger is pulled.  The striker is mounted on a rotating base and with each pull of the trigger the striker is cocked and simultaneously rotated to the next, unfired barrel.

The pistol uses a proprietary 4.5mm SPS pistol cartridge that has high penetrating power by replacing the typical bullet with a metal dart.  Underwater, conventional bullets are highly ineffective being inaccurate and limited to a very short range with a rapidly decreasing lethality.  The “bullet” has been replaced with a long 115mm (4.53 inches) dart weighing 12.8 grams (.452 oz.) made from mild steel that has a slightly flattened tip.  The fired projectile is kept stabilized by using a hydrodynamic cavity that is generated by the flattened point of the projectile that results in reduced drag, increased accuracy and lethality.  The dart has a longer range and more penetrating power than speargun spears.  The cartridge is a rimmed bottleneck case 40mm (1.575 in.) long and sealed against water.  The complete cartridge is 145mm (5.71 in.) long and weighs 17.5 grams (.617 oz.). 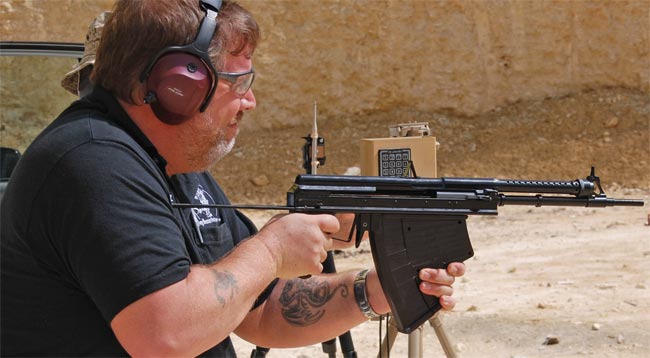 The pistol is loaded with four cartridges at a time that are held together as a group by a clip in the same square arrangement as the barrels.  The pistol is broken open and the clip containing the four SPS cartridges are inserted into their respective chambers.  The action is closed and the pistol is ready to fire.  There is a single lever with three position options located on the left side of the frame at the top of the pistol grip, just behind the trigger, that controls the operation of the pistol.  The top position is for “Reloading” (barrel release), the middle position is “Safe” and the bottom position is “Fire.”

The pistol can be fired out of the water in the air environment.  Due to the pistol being smoothbore and firing a dart, the projectile is not stabilized at all and accuracy is greatly affected with an effective lethality range of 15-20 meters.  In an emergency, at very close range, it is still highly effective.

The SPP-1M underwater pistol comes complete in a metal storage case that includes the pistol, ten cartridge clips, a holster that can attach to a diver’s belt, a device for loading the SPS cartridges into the clips, a special sling to carry the pistol and three combat ready metal quivers that each hold a set of four loaded SPS cartridges in their clips that the diver can attach to his dive belt.  Thus, the combat load is four rounds in the gun and twelve at the ready.

5.66mm APS Underwater Assault Rifle
The Tsniitochmash 5.66mm APS (Avtomat Podvodnyi Spetsialnyi – Special Underwater Assault Rifle) was produced at the requirement from the Soviet military to provide the underwater warrior with greater firepower and extended range than that of conventional underwater weapons and the SPP-1M underwater pistol.  Developed in the early 1970s, the APS was designed by a team headed by Vladimir Simonov, the nephew of Sergei Simonov, who designed the SKS carbine. 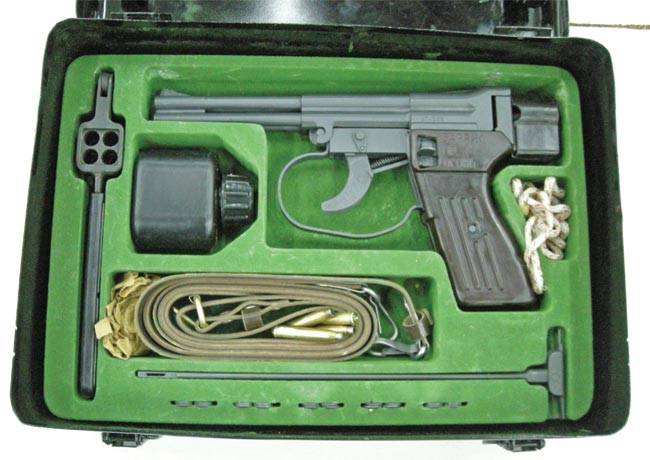 As the basis of their design work, the designers began with the Kalashnikov rifle but discovered that although the AK would work under water, the bullets had virtually no effective range and were grossly inaccurate.  Back at the drawing boards, the designers came up with the APS design relying heavily on the lessons learned during the development of the SPP-1M underwater pistol.

The APS underwater assault rifle is smoothbore like the SPP-1M pistol firing a 120mm (4.72 in.) long 5.66mm dart projectile with a length-to-diameter ratio of approximately 21 to 1.  The MPS cartridge uses a standard 5.45×39 case sealed against water.  Using the same basic technology of the pistol, the long, thin projectiles are stabilized by water flowing along the sides and supercavitation to provide stability during travel rather than by spinning.

The rifle is gas operated and features a patented self-adjusting gas valve that allows the gun to be fired both under water and in atmosphere.  This self-adjusting gas valve was necessary because the energy required to operate the moving parts, particularly the bolt and operating rod, constantly change as the diver goes deeper and the water becomes more dense restricting the movement of the moving parts.  The rifle is select-fire for both single shot and full automatic with a single fire control selector switch on the rear of the left side of the receiver just above the pistol grip.  The fire control selector switch has three positions: forward for single shot, up for full automatic fire, and back for safety.  The rate of fire in full automatic is 600 rounds per minute in atmosphere but slows progressively as the gun goes deeper under water with the actual rate of fire depending upon the depth.  Information on the cyclic rate of fire at different depths was not available.  “Sources” note that while the APS can fire in atmosphere, the projectile does not effectively stabilize in the air, so its lethal range out of water is less than 100 meters and accuracy at that range is highly questionable – more than likely accurate out to about 50 meters.  Additionally, the expected service life of the APS when fired in atmosphere degrades severely.  Thus, it should be fired in atmosphere only in an emergency.  It was designed for underwater use, and it that environment, it is quite effective. 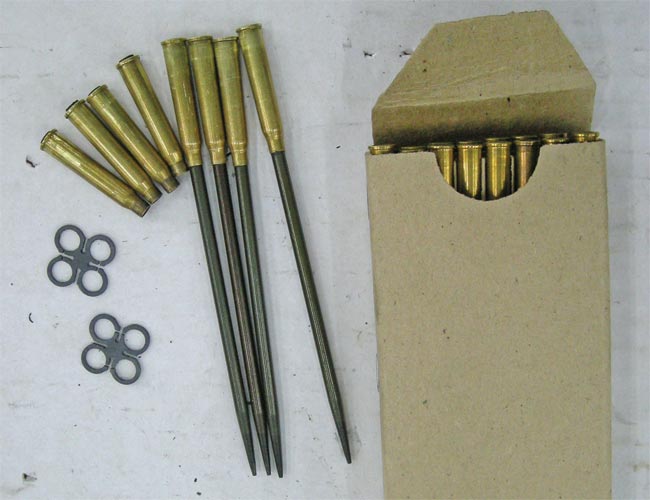 4.5mm cartridges for the SPP-1M pistol are packed 768 rounds per wooden chest, in two sealed cans of 384 rounds each. Each box contains 24 rounds, or six sets of four rounds per clip. In this picture, there are two of the clips to the left, and a set of four expended cartridges to the left of the four live cartridges in the center. (Dan Shea)

The sights of the rifle are rather crude with a non-adjustable open notch rear sight and a post front sight.  The rifle has a retractable shoulder stock made from steel wire that employs in a fashion similar to the U.S. M3 Greasegun.

The APS fires from an open bolt to allow the barrel to continually be filled with water, which is necessary for its reliable operation because of the type of projectile it fires.  The cocking handle and ejection port are both on the right side of the receiver.  The rifle feeds from a detachable polymer box magazine holding 26 rounds.  The shape of the box magazine is quite distinctive in that it is unusually deep (front to back) to accommodate the unusual shape of the MPS cartridge.  While the gun is relatively simple overall, the most complicated thing is the feed system where several parts had to be designed and installed to prevent double and even triple feed due to the extremely long projectiles.  The magazine release switch is located in front of the trigger guard and just behind the magazine.

Accessories for the APS underwater assault rifle include a canvas carrying case and a spare magazine pouch to wear on the diver’s belt. 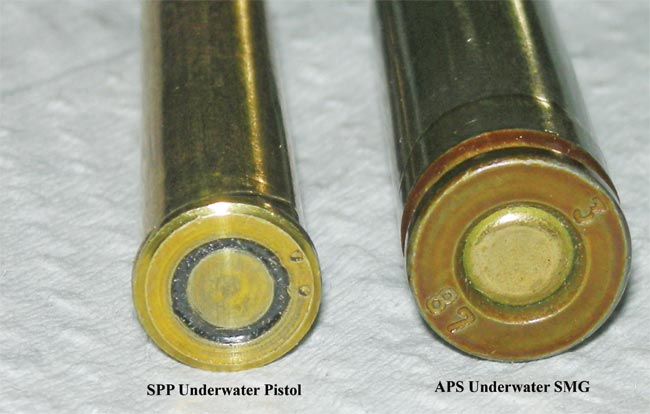 The Russian government has publicly acknowledged only one instance of operational deployment.  In November 1989 at Malta, President George Bush and Russian Premier Mikail Gorbachev had meetings aboard a ship and the flotilla on which these two heads of state met were protected by a 16-man team of divers armed with the APS underwater assault rifle.

The rifle has been in active service with the Soviet and Russian special operations units for many years.  Tsniitochmash has been actively marketing the weapon since the 1990s and it is not known how many APS rifles have been sold on the international arms market to Western users, but it can be safely assumed that the rifle is in service outside Russia.

In today’s Global War on Terror, the threat is no longer just on land, on the sea and in the air.  Underwater threats to ships, ports, harbors, rivers, estuaries, offshore drilling operations and pipelines are just some of the targets that can no longer be ignored and are vulnerable to underwater attack.  The APS underwater assault rifle, and its little brother the SPP-1M underwater pistol, are clearly designed to meet these threats with use by special forces units, specialized law enforcement tactical teams and industrial security personnel – and they meet them quite well.

Because the guns are manufactured in Russia, they are not importable to the U.S. and Small Arms Defense Journal has not been able to evaluate or test fire either of the guns underwater – just the limited open air experience in Southwest Asia.