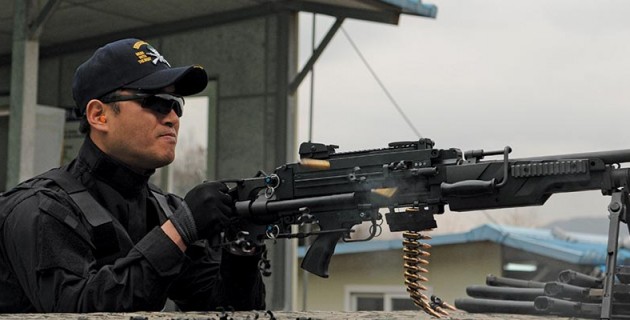 ABOVE: Shooting with spade grip only. Even with this configuration control was not that difficult.

From 1990 to very recently, the ROK (Republic of Korea; or South Korea) army had a tendency to reduce the presence of 7.62mm NATO light or medium machine guns. From the 1970s to 1990, the South Korea military used M60 GPMGs as their ‘almost universal’ machine gun; first supplied from the U.S. as military support when the ROK military dispatched a considerable number of troops to Vietnam and then manufactured under license by Daewoo Precision Industry, Co. (today’s S&T Motive). It was used everywhere machine guns were used: infantry, vehicle mounted, helicopter mounted, etc. Since the ROK military was heavily influenced under U.S. doctrine, it was quite natural and that influence led to the development of the K3 SAW (Squad Automatic Weapon), since the U.S. Army used the M249 SAW from the 1980s. The K3 is the ‘Koreanized’ version of the famous Minimi, and the role of K3 in ROK Army/Marine Corps was initially quite similar to that of the M249 in U.S. military. However, during the 2000s, things began to change. While M60s became old and gradually needed to be replaced, ROK military changed many of them with K3s. Unlike the U.S. military who uses medium machine guns for platoon level fire support, the South Korean army replaced many old M60s in infantry outfits with K3s – thus removing medium machine guns for infantry. Vehicle-mounted and helicopter-mounted MGs mostly remained to be M60 variants, but even for that role some K3s were employed; for example, a few Korean made armored vehicles were armed only with K3s. The barrel change is accomplished the same as the Minimi. No special tools of gloves are required.
Since the K3 is still in production (unlike the M60, whose assembly line was closed long ago), replacing M60s with K3s may have seemed reasonable to ROK military bureaucrats. However, as vehicle and aircraft mounted weapons, 5.56mm machine guns have short range and limited power. So most Korean tanks, armored cars and virtually all helicopters are still armed with 7.62mm MGs, – almost all of them M60 variants. Yet, replacements for those M60s were not easy to come by. Simply put, the ROK military didn’t want to spend money on that. While they have money for buying Aegis destroyers or F-15 fighter jets, they thought buying new MGs to replace the venerable M60 was a waste of money. They saw no reason for replacing M60s that were still working relatively well. The safety for the spade grip is on top and in front of the butterfly trigger. It is shown here in the safe position.
New Helicopter Arrives But things changed quite rapidly during last few years because of the introduction of new helicopters. From 2006 to 2012, Korea developed the Korean Utility Helicopter, or KUH. This is a mid-sized utility helicopter, and from 2012 the Korean army is committed to buying 300 of them. Thus then came the requirement for new machine guns for these helos: M60s mounted on the previous helicopters were now quite old – especially the ones mounted on UH-1H Hueys, which considerable numbers of them remained from the Vietnam war, so the army hoped to buy new 7.62NATO machine guns for the new helos. Initially, the army wanted to buy from foreign vendors (especially FNH, who suggested the M240H), but both the army and a Korean company, S&T Motive, the only military small arms manufacturer in Korea, saw a new chance to develop an indigenous 7.62mm machine gun. While a few hundred machine guns for helicopters were not enough reason to develop a new machine gun, there was enough chance to replace the other old M60s as well. The Korean army has to maintain a considerable number of them for their tanks and armored cars. The army has more than 2,300 tanks, which usually has two M60s each, and a similar number of armoured cars that were armed with one M60 each. Additionally, because of U.S. experience in Iraq and Afghan, many in the ROK army now demand 7.62 MGs back to infantry outfits. Once the South Korean army buys considerable numbers of them, the export market will open up. Consequently, S&T Motive began developing a new machine gun under the name of XK-12 in July 2010. XK-12 prototypes began to be mounted and tested on KUH helicopter prototypes, but by that time, the XK-12 had already fired 300,000 rounds without any serious problems. From 2012, XK-12 was then adopted as the K-12 light machine gun to ROK army and as standard armament on the KUH. Full production is now under way. The rear sight is a ladder type, which can be use out to 1,800m. This can be removed via rail.
Basic Design and Characteristic K-12 is gas operated, with gas piston and rotating bolt, and feeding is done by typical STANAG M13 disintegrating belt link. This gun is based upon the K3 machine gun in terms of basic design, layout and function and is quite similar to the K3. Even the safety is the same as K3/Minimi (very typical cross-bolt type). But unlike the K3, it can’t be fed by magazine. The receiver is made from steel press, but the feed cover is machined from aluminum alloy. This doesn’t pose any problem as the original FN Minimi, the basis of the K3 machine gun, had already been converted into the “Maximi,” or Mk.48 and serves quite well in the U.S. and other armed forces. The K-12 is not just a 7.62 conversion of the K3. While the basic design is quite similar, the K-12’s receiver size is larger than the K3, and many important parts were enlarged to accommodate the larger ammunition. K-12 with feed cover open. Internally, it is very similar to the K3, but mostly enlarged to accommodate the 7.62NATO cartridge.
That’s one reason this weapon weighs 12kg, which is somewhat heavy for this class of machine gun. But there’s another reason; unlike other helicopter mounted machine guns, it has pistol grip, spade grip and metal sliding stock. Most other machine guns have to choose either one of them, not all; but since the K-12 has all of them on one gun, once this gun is dismounted the operator can convert this into a ground-fire machine gun within seconds. All he needs to do is remove two pins, remove the spade grip, unfold the stock and fire it. The folding stock design is very similar to FN Minimi’s Para version. Other than that, the K-12 is not that different from other gas-operated machine guns. It has a folding bipod (again similar to the K3), quick change barrel and gas regulator. If one is familiar with Minimi or Maximi, you almost don’t need to learn how to assemble or disassemble this gun; except spade grip. The flash hider is a four-prong design, which also can be seen on the M240H. It also has a folding ring sight for firing on fast-moving helicopters, but it also has a folding ladder type sight for more accurate aiming. This sight is attached on a Mil-Std 1913 rail so it can easily be removed and replaced. Within 500 meters the sight can be used in its down position; over 500 meters and the sight has to be raised. The sight has a range of 1,800 meters. The Mil-Std 1913 rail is on the feed cover and also on both sides of the handguard. While no configuration of laser sight or optical sight has been decided on yet, the ROK army thinks they would use some kind of electro-optical accessories on the K-12 within the near future. It also can adopt night vision sights with those rails, especially the one on the feed cover. The K12 has a telescopic stock, pistol grip and spade grip, so you can use the same gun for both mounted and dismounted operations. Even when used with the spade grip, the original trigger is used via a trigger bar.
Fire and Operation This author had a chance to visit S&T Motive’s factory last year and fire the K-12 machine gun. This was a rare opportunity as the ROK is quite strict on details of military weapons. But this also shows S&T Motive’s confidence in K-12’s quality. The weapon we tested was one fresh from the assembly line, which was scheduled to be shipped to end users very soon. Firing was done from pistol grip/folding stock and also from the spade grip – while only supported by the bipods. Recoil was not that strong in either firing position and caused no problem when fired. Since I had some experience with the M249 SAW, using the K-12 was very easy and instinctive.

The bipod is also very similar to the Minimi and K3. Length can be adjusted to three positions. It is also strengthened to accommodate the weight of the K-12.
Operation was flawless. About 250 rounds were fired within a few minutes without any malfunction, jam, overheating or failure of any kind. A few long bursts of 10-20 rounds were also fired, again without any problems. The flash hider on the muzzle also worked quite well. While the day we fired was considerably cloudy, we could see almost no muzzle flash. One thing worthy of mention and quite impressive was the ejection. The ejection port is located very similar to the Minimi, and spent cases were virtually thrown away very hard. Feeding was also quite positive and flawless as during the firing sequences no one supported the belt. The folding telescopic stock is very similar to that of Minimi Para and is used in just the same way.
Overall Impression The K-12 is not that special of a gun with a relatively conventional design. But put three things (spade grip, pistol grip and stock) on a single gun is unique and an interesting feature, which probably makes dismounted operation much easier. Weight is somewhat heavy, but the 12kg weight is not that different from the M240 or MG3. And since it’s used on helicopters, not by foot soldiers, the weight would not be a problem. If the infantry requires the K-12, making a lighter version would not be a problem since you simply replace both pistol grip and folding stock with single polymer stock, which probably can save considerable weight. It is, in all aspects, better than the M60 it replaces, and already ROK helicopter crews appreciate its ease of operation compared to the M60. Field reliability and rigidity is another matter, but as it’s a new weapon, it should have good potential once it proves itself in ROK service. The chance of good sales in export markets is promising and as the K3 machine guns are sold to some countries with good reputation, the K-12 also can appeal to existing K3 users and potential MG users as well. Right now, only the helicopter-mounted version is adopted and purchased by the ROK military. But the infantry version is also suggested by S&T Motive, and other versions would follow as soon as requirements appear. Specifications Weight: 12kg Caliber: 7.62mm NATO Length: 1.234m w/ stock fully extended Barrel length: 559mm Rifling: four, right hand twist Cyclic Rate: 650~950 rpm