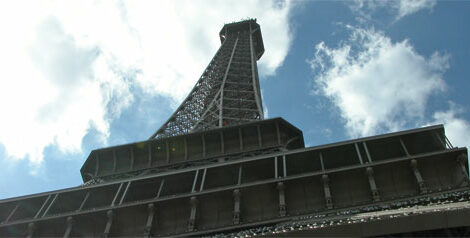 Eurosatory 2010 was held at the Parc du Exposition, located outside of Paris, France on June 14-18, 2010.  As one of the largest tradeshows in the world dedicated to the international arms trade, nearly 1.3 million square feet of exhibition space was filled by more than 2,000 exhibitors from over 50 countries, including 125 exhibitors from the United States.  Approximately 50,000 individuals from over 145 countries attended the show.  Of note were several new product releases and market trends from well known and lesser known manufacturers.

Remington Modular Sniper Rifle
No single rifle can accomplish all tasks; what may be suitable for .308 may not be accomplished by .338 Lapua.  In response, it is not uncommon for tactical units to possess multiple rifles to be used depending upon the situation and range to target.  The Remington Modular Sniper Rifle seeks to eliminate redundancy and multiple weapon platforms.

The rifle is capable of conversion between .338 Lapua, .300 Winchester Magnum, and 7.62×51 NATO within a matter of minutes by changing the barrel, bolt head, and magazine.  Featuring a free float, monolithic hand guard, M-1913 rails are available in 20 MOA, 30 MOA, and 40 MOA increments, allowing full use of day, night, or thermal optics to all be mounted on the same horizontal plane.  Look for a full review of the rifle system within a future issue of Small Arms Defense Journal.

Ase Utra
Little known within the United States, Ase Utra is a well established Norwegian suppressor manufacturer with modern and efficient designs.  Two recent introductions were most recently on display.  The first is a highly efficient 5.56mm suppressor with a threaded quick detach mount.

The second suppressor may very well be the smallest .30 caliber suppressor in current production.  Measuring just over 4 inches long and about 2-inches in diameter, the suppressor reportedly provides 24 dB of sound reduction.  Built from 300-series stainless, the suppressor weighs approximately 400 grams and may be used on all .30 caliber rifle applications.

KBP Instrument Design Bureau:
Weapons from the former East-bloc are always fascinating, due in part to differing designs than traditional Western engineering.  Special purpose weapons occasionally appear in the public realm, with little fanfare.  This year’s event was no exception, with the display of three specialized and rarely seen weapon systems.

The AGS-30 is the little brother to the AGS-17 AGL.  This variant is much simpler, lighter, and deadlier than the AGS-17.  As explained by the KBP representatives, it is very easy to fire several rounds, pick up the launcher, and move to a new firing position to avoid detection and counter battery fire.  The AGS-30 fires the same 30mm round used within the AGS-17 system.

Multiple grenade launchers are currently in vogue.  Typically designed as a rotary drum, there are few MGLs that feature an inline loading system.  Efforts by the United States to produce an inline ammunition feeding system was pursued in the China Lake project, and cancelled in the 1960s with little success.

The Russian GM84 grenade launcher features a 3-round tube magazine, capable of firing 7 types of ammunition.  While detailed information about the ammunition was unavailable, the traditional HE, HEDP, Smoke, TP, AP, and stun flash grenades are available.

Curiously, the system is chambered with a 43mm diameter barrel.  Cartridge measurements were unavailable, and no explanation as to caliber design was available.

Prior SADJ issues have detailed the use of the 7.62mm SP4 telescoping cartridge.  Virtually silent in use, at least two battle rifles are chambered to fire the highly specialized cartridge.  In discrete situations, the use of a carbine may not be practical.  In addition, the use of a semiautomatic (or fully automatic) rifle may be less than desired for discrete situations.  The OTS-38 Stechkin Special Revolver completes the tactical role of the SP4 cartridge. 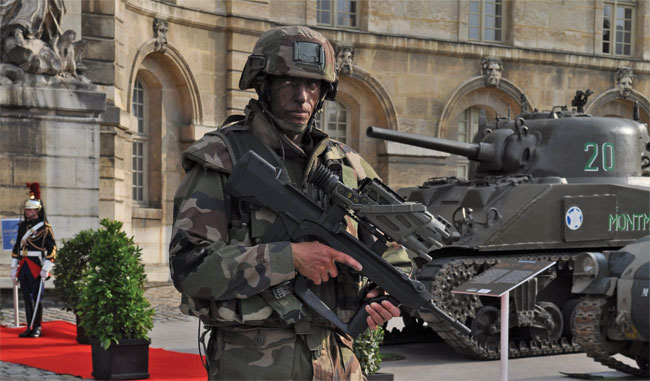 French Felin warrior on display. The French government has committed to upgrading 22,588 units for use and integration within the French Army.

Detailed examination of the pistol was not permitted.  Nevertheless, the pistol appeared to be a standard revolver design with a 5 or 6 round cylinder, and 2-inch barrel chambered to fire the SP4 cartridge.  The cylinder gap between the cylinder and barrel appeared to be unusually tight.  Given the highly specialized nature of the SP4 cartridge, this is an expected feature as a means to provide increased projectile velocity and reduced sound signature.

French Felin (Fantassin à Equipments et Liaisons Intégrés) Modernization Program
While the French Army is currently undergoing downsizing, the French Army 1st Regiment is reportedly being issued the Felin system as part of a modernization program.  The system is reportedly an integrated system designed to enhance dismounted soldier operations.  The system integrates ballistic protection, observation via enhanced digital weapon sights and multi-function imagers, mobility via real time GPS locating for each soldier, C4I support via a digitized command network, and improved communication via individual active and passive radio communication for individual soldiers.  As part of the system, the FAMAS F2, FRF2 sniper rifle, and FN Minimi have been incorporated within the system.  The current Felin program calls for a minimum of 22,588 units for use and integration within the French Army.

Yugo RBGR-38 MGL (38mm)
It is said that imitation is the sincerest form of flattery.  Since introduction of the rotary drum multiple grenade launcher by Milkor of South Africa, a large number of imitators have hit the market with similar rotary drum designs.  The Yugoslavian RBGR-38 MGL is no exception, with the distinguishing feature of being chambered in 38mm.  No explanation as to chambering was offered; presumably the system could be chambered to fire traditional 40 x 46mm low pressure grenades.

DEP Imaging
DEP Imaging introduced the Griffin, an integrated un-cooled thermal and night vision system.  Thermal sight systems provide an unparalleled ability to see in day, night, and low light level situations where night vision may not be feasible.  Thermal systems also work very well in obscured environments, where sand, dust, fog, or smoke may obscure the potential target.  In comparison, intensified images provide accurate target identification, use of an IR illuminator in low (or no light situations), and the ability to penetrate glass barriers.  Simply, night vision systems provide a depth of field and the ability to see terrain detail that thermal systems are unable to provide.

The Griffin provides real time thermal and autogated digital image intensification (night vision) in a single system.  Measuring 2.8 x 1.8 x 1.4 inches, and weighing 3.5 ounces, the system is capable of being mounted to a helmet or vehicle.  Power use is minimal at less than 2.5 watts, with an image lag time of less than 1 microsecond.  In actual use, the system was capable of providing the benefits of both thermal and digital image intensification to provide an accurate and unparalleled view.  Additional information is available at www.dep-imaging.com. 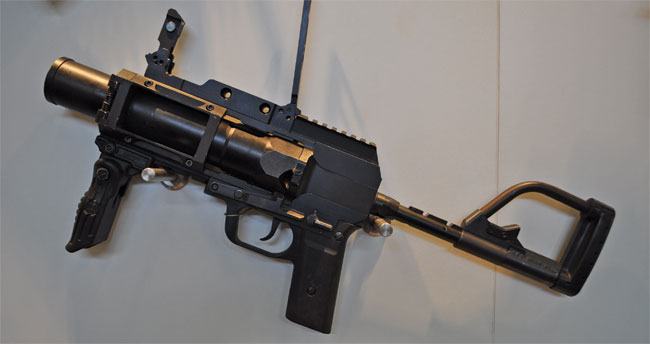 Ceska Zbojovka (CZ)
CZ introduced the CZ 805, Bren A1/A2 battle rifle.  An entirely new design, the rifle bears no resemblance to the traditional Bren system of World War 2.  Instead, the rifle utilizes a gas piston recoil system, a locked breech and rotating breech block, allowing a cyclic rate of 760 rounds per minute.  Currently offered in 5.56mm, the rifle utilizes traditional AR-15/M16 magazines.  However, the rifle is also reportedly capable of being converted to fire 6.8mm and 7.62×39 cartridges.

Utilizing a four position fire control selector, the rifle is capable of firing semiautomatic, two-round burst, and fully automatic fire.  The Bren A1 system is a traditional rifle system with a 14-inch barrel and overall length of 36 inches, while the A2 configuration features an 11-inch barrel and an overall length of 30.7 inches.  Folding the stock reduces the overall length by approximately 10 inches.  Two stocks are available, either a collapsible and folding stock, or a non-collapsible folding stock.  Unloaded weight is reportedly 7.9 pounds.  Additional information may be found online at www.czub.cz.

Camelbak
In response to the ubiquitous Jerry can, Camelbak has introduced the Squadbak as a means of water storage and unit level water replenishment.  Capable of holding 50 liters of water, the Squadbak is capable of replenishing 3 Camelbak systems simultaneously.  Individual replenishment is easily accomplished by removing the bit valve of an individual Camelbak system and attaching it to the Squadbak valve.  No water is ever exposed or poured out of the reservoir to the individual units – refilling of the individual reservoir is accomplished via the drinking tube exclusively.

Similar to its smaller brethren, the Squadbak collapses as the water is removed.  Unlike the hard plastic Jerry can, the Squadbak is easily carried by a single soldier via built-in backpack straps.  While not intended to be carried for long periods as a back pack, the system is less bulky and more easily man portable.  Finally, unlike the plastic Jerry can, the risk of creating secondary projectiles during a catastrophic incident is reduced due to the soft bladder and fabric construction of the Squadbak system.  Suggested retail is in the $200 range and will be available for retail and direct military sales.

Aimpoint
Aimpoint introduced the FCS12 fire control system for the 84mm Carl Gustav RCL, Panzerfaust, and other automatic grenade launching systems.  The system utilizes a 1550nm eye safe laser range finder that is not observable with current night vision systems.  Once range is calculated, the ballistic computer calculates the aiming point and automatically adjusts the reticle to allow direct point of aim.  The ballistic computer is capable of storing up to 50 different ballistic algorithms, and automatically compensates for the ballistic drop at the measure distance, spin drift, propellant temperature, and terrain angle via an incorporated clinometer.

Utilizing a direct line of sight, the system allows the user to engage the target with both eyes open, ensuring a higher first round hit probability.  Use of the system is remarkably easy.  The user selects the type of round being fired, determines the distance to the target, and aims the weapon.

The system utilizes 6-AA type batteries, is capable of more than 96 hours of continuous use, with 15 power settings (7 night vision capable, and 8 daylight)

Schmeisser
The long known German weapon manufacturer is back with a vengeance.  Recently tasked with updating the G3 rifle platform for the German special forces, Schmeisser responded with a G3 rifle complete with adjustable Magpul stock and M-1913 Picatinny rail fore end.  No additional information was available, but a sample is being sourced for future testing and a full report.

The AR-15/M16 platform continues to evolve, with a wide variety of manufacturers producing the weapons system worldwide.  Schmeisser’s version includes a strengthened butt stock, reinforced front and rear take down pins, and a G3 type 2-pin barrel retention system that eliminates the traditional AR-15/M16 barrel nut.  The rifles are reportedly in current production and available for international sale.

Eurosatory 2010 was a great success, and offered a glimpse into the international arms market.  Hosted on a biennial basis, the next show is scheduled for June 11–15, 2012, in Paris, France.  Additional information regarding the show can be found at www.eurosatory.com.