AUSA 2008: Developments in the Defense Industry 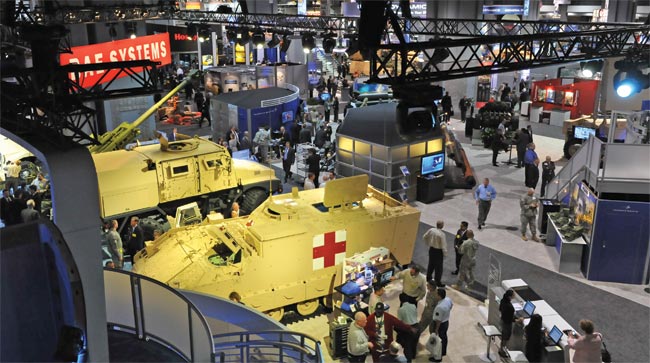 The Association of the United States Army held its annual meeting on October 6-8 in the Walter E. Washington Convention Center, Washington DC.  As one of the premier showcases demonstrating developments in the defense industry, more than 500 exhibitors from more than a dozen countries displayed their products and services.  Displays included cruise missiles, unmanned aerial vehicles, small and medium caliber small arms, and armored vehicles.  Small Arms Defense Journal was present to report on new products and advances within the defense community.

ATK
ATK showcased a new medium caliber system utilizing a redesigned 20mm, 25mm, and 30mm weapons system.  Designed in two parts, the weapon mount has been designated the PAWS – the Palletized Autonomous Weapons System.  As a self contained and fully autonomous weapons system, the PAWS system provides the user the capability to aim and fire virtually any small and medium caliber weapon.

As a roll on/roll off system, the PAWS can be fully palletized for air delivery.  Set up time from crate to running system testing is reportedly less than 10 minutes.  Designed from off-the-shelf components, the platform can be easily installed in a variety of platforms.  Representatives of ATK indicate that due to the light weight, the PAWS system can be utilized within a light truck, Unmanned Aerial Vehicle (UAV), light boat, or rotary aircraft. 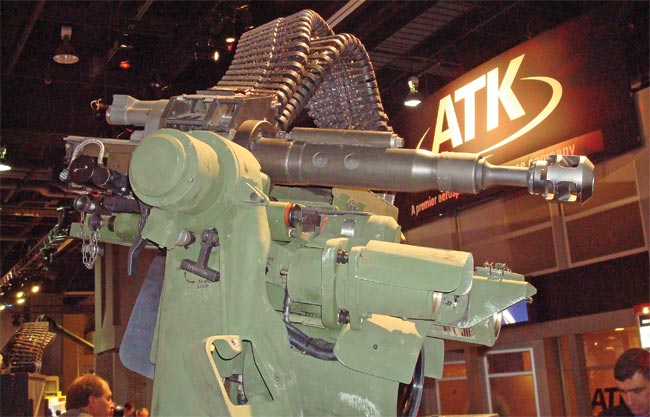 The ATK LW25 Bushmaster mounted on the PAWS weapon mount. Weighing 68 pounds (without the mount) the LW25 Bushmaster is capable of being utilized in light trucks, rotary wing aircraft, or an unmanned aerial vehicle (UAV).

Use of the system was extremely easy.  A joy stick controls elevation, traverse, and fire controls, while a LCD display provides an aiming point and view of the target.  The system is electrically powered, and capable of using batteries or a variety of external power sources.

In conjunction with the PAWS weapon mount, ATK has redesigned the 25mm Bushmaster chain gun.  Designated the LW25 Bushmaster, the system is a compact and lightweight system based upon the successful Bushmaster family of chain guns.  Weighing 68 pounds (unloaded) or 94 pounds with available soft mount and fire control unit, the LW25 has a reported cyclic rate of 250 rounds per minute.  In addition, ATK representatives report that the system has a Mean Rounds Between Stoppages (MRBS) in excess of 35,000 rounds, providing an extremely reliable system. 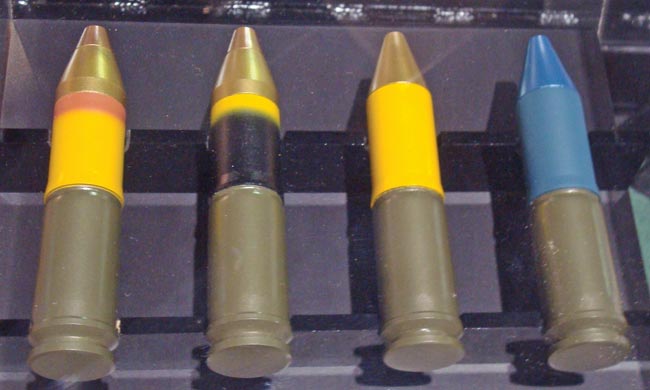 The Programmable Air Burst Munition is reportedly a remnant of the OICW program, complete with point detonating fuze and programmable airburst capability.  As evidence that old projects never die, the OICW project is alive and well at ATK, and has now been designated the Individual Airburst Weapon System (IAWS).  Designed to engage targets at 300 meters, the system has a maximum effective range of 500 meters.  Similar to the OICW, the IAWS utilizes five types of ammunition: thermobaric, flechette, training, high-explosive airburst, and non-lethal.

Heckler and Koch
Heckler and Koch revealed a new blank firing adaptor intended for the M16 family of weapons.  Intended to be used as a compete system comprised of a magazine and muzzle device, the blank firing adaptor is intended to prevent the use of live ammunition.  The length of the magazine is reduced, to prevent users from loading ball ammunition.  Instead, only blank ammunition (which is typically shorter in length than live ammunition) may be loaded within the special magazine.

The system is reportedly under test and evaluation by the U.S. Marine Corps.  An HK representative indicated that the system is not currently in production, and would not be produced unless a significant order was placed by a branch of the military.

The AT-4 system has always been intended as a disposable system.  Unlike the Carl Gustav system, the AT-4 system cannot be reloaded once the rocket is fired.  As originally designed, the plastic weapon sights are crude, simplistic, and hard to use.  As originally designed, the original AT-4 weapon sight cannot be zeroed, or adjusted for range.  As a result, Saab Bofors worked together with Aimpoint to incorporate a red dot sight to the system.  Adjustable for range, the soldier estimates the range to the target, adjusts the sight, places the aiming point directly on the target, and fires the weapon.  As the AT-4 system is disposable, the new Aimpoint sights are reportedly disposable, and not intended to be reused.  Finally, a Picatinny rail has been incorporated within the AT-4 tube, to allow the user to mount and use a laser designator or range finder as part of the system.

Barrett Firearms
Barrett Firearms revealed their new .338 Lapua bolt action rifle.  Designated the Model 98B, the new .338 Lapua rifle sports a 27 inch barrel, and has an overall length of 49.75 inches.  The barrel utilizes a ten-round polymer magazine, with an ambidextrous magazine release lever.

Built primarily of 7075 aluminum and polymer plastics, the complete system weighs in at 13.5 pounds.  Considering that the Barrett 82A1 weighs nearly 31 pounds, the Barrett 98B provides significant weigh savings while providing a platform capable of heavy hitting long range shooting.  The barrel is fluted for additional weight savings, while utilizing a 1-in-10 twist rate for long range accuracy.

Projected to be available in January 2009, the current suggested retail price will be $4,500.

The Colt Eagle, 40mm low velocity grenade launcher. Weighing in at 4.7 pounds, the system is a little heavier than the legacy M203 system, but is easier to use, and allows a greater choice of ammunition.

Colt Defense
In response to recent U.S. Army solicitations and weapons tests, Colt Defense presented a large number of new and innovative weapon platforms.  SADJ spent a significant amount of time discussing weapons development with MG Battaglini, (USMC, Retired) Colt’s Chief Operating Officer and Kevin Brown, Vice President, Military Programs.  Built in response to a request from the U.S. Army, MG Battaglini explained that the new models were not intended to replace the venerable M4 carbine.  Rather, the new systems were designed to demonstrate the available technology, should the U.S. military decide to upgrade or change existing specifications to the M4 carbine system.

Colt Defense presented several major developments to the M4 weapon platform, including the use of a monolithic upper receiver, the use of a piston system, the creation of a hybrid short stroke gas/piston system, and an articulated gas piston. Colt Defense also presented a newly designed 40mm low velocity grenade launcher.  Designated the Eagle, the grenade launcher is a side opening, fully ambidextrous system capable of being used as either a stand-alone unit, or mounted to a battle rifle.  With a built in pistol grip, the system appeared to be a direct competitor to the Heckler and Koch AG-C system, and was reportedly submitted for review by the U.S. Military when considering a replacement to the M203 weapons system.

Weighing 4.7 pounds, the Eagle weighs nearly two pounds heavier than the M203 legacy system, but provides additional capability to fire non-traditional rounds that would not otherwise fit within the M203 breach.  Outfitted with Picatinny rails, the weapon is capable of accepting traditional iron sights intended for a 40mm system, or an EOTech 40mm grenade launcher sight.  The Eagle is capable of firing nearly any conventional or commonly acquired 40mm lethal and less-lethal ammunition.

by Jason Wong on 15 August, 2011.
Tags: 2009, Jason Wong, V1N2, Volume 1
← Defense & Security 2008
U.S. Maxim Model 1904 →
Distributed at trade shows worldwide, Small Arms Defense Journal is a bimonthly publication that focuses on small arms, accessories, gear for the soldier, new products, industry news, and defense trade shows. The first issue of SADJ was Spring 2009, which launched at the LAAD show in Rio de Janeiro, Brazil. SADJ (pronounced “sage”) is targeted toward military, law enforcement, and defense industry professionals. Our job is to reach these groups and tailor content to their interests while producing a publication that is applicable to an international audience.