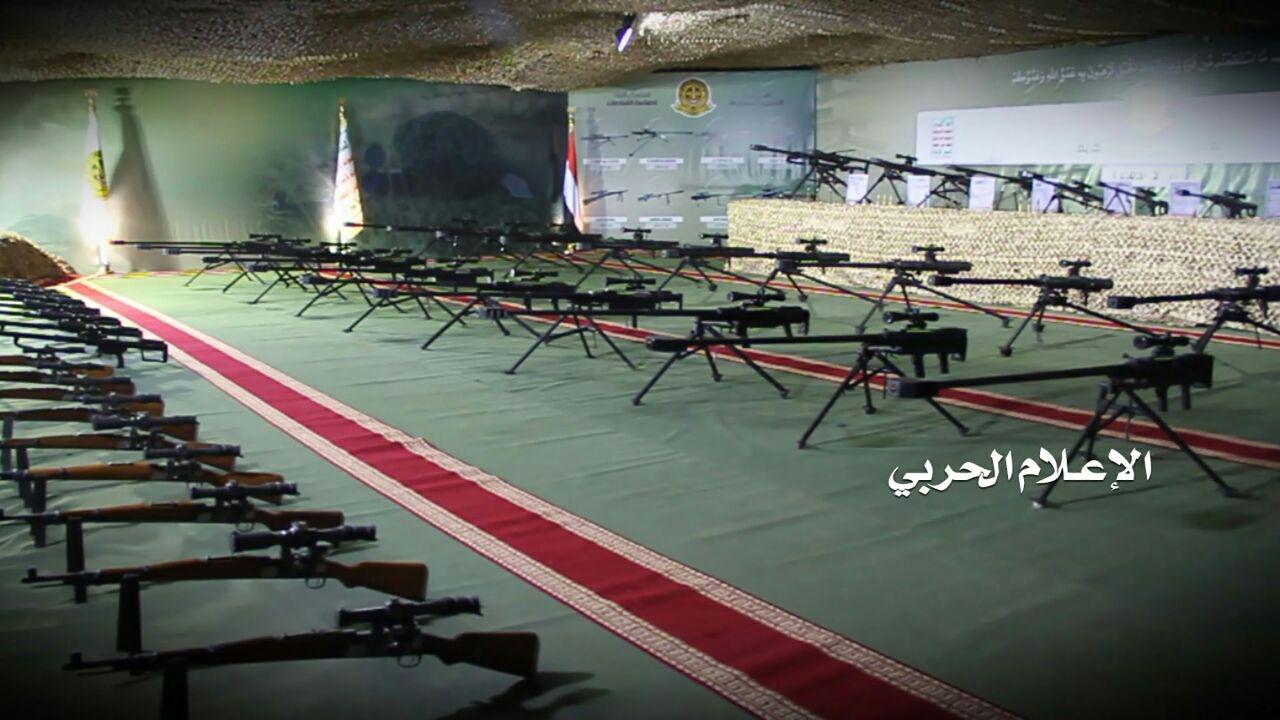 A YPG sniper employing a Zagros AMR against Islamic State forces at the Battle of Al Hawl, November 11, 2015. (AL MASIRAH)

A video published on August 23, 2017, which was purportedly produced by the “Defense Industry Department” of the armed forces who are loyal to the Ansar Allah (“Houthi”) movement, shows several types of craft-produced weapons being developed and employed, including anti-materiel rifles and light cannon up to 23mm and even 30mm in calibre. The video was first broadcast on the Houthi-owned Yemeni TV channel Al Masirah and gives some basic specifications for each of these weapons. It should be noted that the technical specifications given are not necessarily accurate. In particular, the claimed ranges of these weapons will, in reality, vary significantly with user skill—almost invariably being much shorter than described.

The Sarem 8mm sniper rifle is stated as having a maximum range of 1,600 metres and a weight of 4kg. This weapon appears to be a Mauser Karabiner 98k type bolt-action rifle chambered for the 7.92x57mm cartridge. It is quite probably the Yugoslav M48 copy which has been seen several times in the region. These old rifles are fitted with what appear to be 6x24mm POSP optical sights. Despite their age, these rifles can pose a threat in experienced hands, particularly when fitted with an optic.

Craft-produced light cannon Shown next are craft-produced anti-materiel rifles (AMRs) chambered for the common Soviet-origin 12.7x108mm and 14.5x114mm cartridges, commonly used by heavy machine guns. As is common practice for many craft-produced AMRs globally, surplus barrels from weapons such the Soviet/Russian DShK and KPV type heavy machine guns form a key component in the construction of such rifles. The weapons are typically simple single-shot bolt-action guns, occasionally being magazine fed. prepared for inspection. (AL MASIRAH)

Such makeshift adaptations have become increasingly common, where captured or damaged vehicles provide a ready source of mounted weapons which can be disassembled and re-purposed. In several cases, damaged weapons have had viable barrels salvaged from them. The allure of such craft-produced AMRs owes to the fact that personnel and even lightly armoured vehicles can be defeated at long range with the large cartridges, making the user difficult to detect.

It’s no wonder that, in the absence of large-calibre sniper rifles of industrial production from other countries, locally craft-produced models are appearing frequently in multiple conflict zones. Such weapons are usually produced in typical light workshops equipped with lathes and milling machines, which may be capable of producing relatively high-quality mortars, AMRs and other weapons. In some cases, direct copies of conventionally-produced weapons are made, such as the SPG-9 recoilless guns produced in workshops operated by ISIS in Mosul.

The 12.7x108mm Khatef rifle is described as being portable over all terrain, with a weight of 14kg and range of up to 1,500 metres. It appears to be manufactured using a basic tubular receiver into which is fitted a DShK type barrel. Several of these appear to have been taken from a Chinese HMG known as the Type 54.

The 14.5x114mm Ashtar is described as having a weight of 28kg and a range of 3,000 metres. This much larger rifle is fitted with a monopod towards the rear to provide balance for the long, heavy barrel.

Khatef, a 12.7x108mm craft-produced bolt-action rifle, with a weight of 14kg and a claimed maximum effective range of up to 1,500m. (AL MASIRAH)

The 20x102mm Hasem has a stated weight of 28kg and maximum range of 2,500 metres. It is billed as being capable of engaging low-flying aircraft such as helicopters. The choice of this calibre is not accidental. Yemen remains one of the countries who continue to use U.S. 20mm M167 Vulcan Air Defense Systems (VADS) which are typically mounted on vehicles and have, in this conflict, been more commonly employed against ground targets.

The Zulfiqari 1 is a 23x152Bmm calibre gun, suggested for installation on “all types of military vehicles” and claiming an accurate range of 2,000 metres. It weighs less than 25kg. The Zulfiqari 2 is a larger version weighing some 62kg, with a stated range of 4,000 metres. Construction appears to be very basic, if not crude, with plain steel tubing used for the receiver and grip.

The most powerful of the improvised cannons shown is the 30mm Qassem, with a stated weight of 75kg and maximum range of 5,000 metres. There appear to be at least two slightly differing variants, both featuring external spring assemblies to mitigate what is sure to be substantial recoil. One of these appears to be adapted from a pair of automotive (motorcycle) shock absorbers. A tripod is shown for use, although semi-fixed emplacements and vehicle mounts are likely to be more effective. The video also includes some brief footage of the Qassem being manufactured in a workshop using very basic equipment.

Detail of one of the two variants of Qassem 30mm light cannon, featuring an external spring assembly adapted from a pair of motorcycle shock absorbers. (AL MASIRAH)

A shootout with police in the Ukrainian city of Odessa on January 19, 2017, left three people dead including the shooter. The attack appears to have been carried out using one or more craft-produced firearms. Valentin Doroshenko, a 57-year-old man who was identified as the shooter, was known locally for his pro-Russia activism, being shown in one photo holding a flag emblazoned with Soviet leader Joseph Stalin. He had previously been documented engaging in stunts such as arriving outside the Mayor’s office on horseback to challenge the-then City Head to a duel.

A police officer, 27-year-old Sergei Prigarin, died in the hospital after sustaining a gunshot to the chest while another police officer eventually recovered after receiving five gunshot wounds. Photos released by police appear to show a crude, though compact (and evidently functional), improvised submachine gun complete with a homemade magazine. The magazine appears to have been welded together from sheet steel and is very crude in design. The gun is also fitted with a makeshift “laser pointer” sight attached. According to local sources, the weapon was loaded with homemade steel-core ammunition which may well have been capable of penetrating police body armour. Two more improvised submachine guns, a pistol and several fragmentation grenades were discovered in a workshop equipped with lathes and welding equipment, located in a disguised cellar of the home of the suspected shooter.

The Fight Against Vehicle-Borne Explosive Devices

The Kurdish YPG (People’s Protection Units) employ various craft-produced anti-materiel rifles (AMRs), and ARES has obtained photographs and details for several examples. These photographs and the accompanying contextual information came from a confidential source who served in a sniper tabor (platoon) of the YPG from June 2015 through August 2016. Such guns are also produced by a number of other factions operating in Syria and Iraq, as well as non-state and state actors in other conflict zones. Craft-produced small arms and light weapons, including anti-materiel rifles such as these, are covered extensively in a forthcoming report authored by ARES personnel for the Small Arms Survey.

In combat use, these rifles are used primarily for defence against vehicle-borne improvised explosive devices (VBIEDs), serving a secondary role as counter-sniper weapons. VBIED armour has been generally increased to the point that standard rifle calibres used by designated marksmen (typically 7.62x54Rmm and 7.62x51mm) are not able to stop them reliably. Instead, the YPG turned to heavier weapons. Whenever available, modern anti-materiel rifles such as the Chinese M99, Zastava M93 and Barrett M82 are in high demand, as are direct-fire recoilless weapons and rocket launchers and anti-tank guided weapons (ATGWs). To supplement these scarce and more broadly useful weapons, the YPG has developed several of its own indigenous AMR designs built around barrels taken from heavy machine guns and light cannon.

The two main rifles in service are the Zagros, chambered for 12.7x108mm, and the Ser (and shorter Ser Portative), chambered for 14.5x114mm. Conceptually similar guns have been built in 23x152Bmm, but the YPG determined that these were too massive and bulky to be practical. Islamic State group continued to employ a handful of guns in this calibre, however. All of these rifles are made by fabricating simple tubular receivers and bolts to match up to barrels from DShKM, W-85 and KPV pattern guns. In at least one case, the barrel of a Kord heavy machine gun was used. The barrels may be salvaged from damaged or inoperable guns, or they may be spare barrels accompanying functional guns, depending on circumstances. The resulting rifles are single-shot only.
According to ARES’ source, the Ser Portative was a shortened version of the 14.5mm Ser introduced early in the summer of 2016 in an effort to make the latter more portable. It reportedly succeeded in this, although at the price of very intense felt recoil and muzzle blast. In addition, they are reported to have destroyed optical sights in as few as five rounds. The Zagros was reportedly reserved for use at longer ranges, as it was more comfortable for the user and more accurate to use, because it could be more precisely zeroed with a telescopic sight. The full-length Ser has apparently been largely removed from combat, as it is too bulky for offensive use, and its role has been largely changed to supporting air strikes from CJTF-OIR forces.

It is important to note that all of these rifles are almost exclusively used with ammunition made for machine guns, rather than precision ammunition. This will limit the potential accuracy of the weapons; however, it is unlikely to reduce their effectiveness in the anti-vehicle and anti-materiel roles for which the YPG use them. The availability of AP, API and other specialty ammunition types is likely to compensate for limited precision or accuracy.