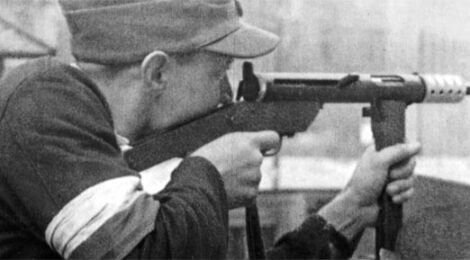 The Blyskawica (‘Lightning’, pronounced bwiskavitsa, with ‘wi’ to be read like in ‘wisdom’) was designed and manufactured fully clandestine, for the Home Army (Armia Krajowa, AK), the mainstream Polish underground movement during the German occupation of Poland during the WWII.  It was the first Polish-designed submachine gun ever to be really mass-produced – and that under the most difficult conditions imaginable.

Compared with their French counterparts enjoying generous arms airdrops from Britain, Polish resistance fighters were poorly armed.  Airdropped weapons were scarce and scant prior to the autumn of 1943, when airfields gained in Italy enabled a (slight at best, judging by French standards) surge in the airdropping campaign.  Submachine guns were virtually non-existent in the Polish Army prior to the war.  After the defeat in the 1939 September Campaign, a resistance movement called the Home Army (Armia Krajowa, or AK) was created as early as October 1939; at first under the name of the Union For Armed Struggle (Zwiazek Walki Zbrojnej, ZWZ), with the aim of preparation for the general national uprising to win the independence in front of the Allied troops, rather than idly waiting for them to come and liberate Poland.  The submachine gun soon proved to be a very useful guerilla weapon, and with an agenda like that, the AK simply had to devise some source of SMG supply more dependable than incidental disarming of German patrols, usually provoking bloody retributions.

Let’s Roll Our Own
In September 1942, Wacław Zawrotny and Seweryn Wielanier, two mechanical engineers with no prior small arms designing experience, proposed to the Home Army’s Warsaw Area Command an idea of designing and manufacturing a 9mm submachine gun of their own.  They studied foreign models, the MP 40 and the Sten, and found both unsuitable for copying.  Although the Sten was simple enough to manufacture under the most difficult conditions (later on to be amply confirmed by a conservative estimation of 2,000 Sten copies and look-alikes made in Poland during the war), but awkward to handle and hardly concealable with its fixed stock and side-sticking magazine.  On the other hand, the MP 40 handled like a dream, and was highly concealable with the folding stock, but the manufacturing technology (making extensive use of die-stamping and spot-welding methods) was far too complicated to replicate with what little machinery and tools were available for the job.

The designers agreed that the new submachine gun should combine the best features of the two, while keeping the manufacturing technology as low-tech as possible.  They decided to use plumbing micro-groove threads and machine screws for most of the joints – bayonet couplings and latches of the factory-made weapons were far too advanced to replicate with the available hardware. 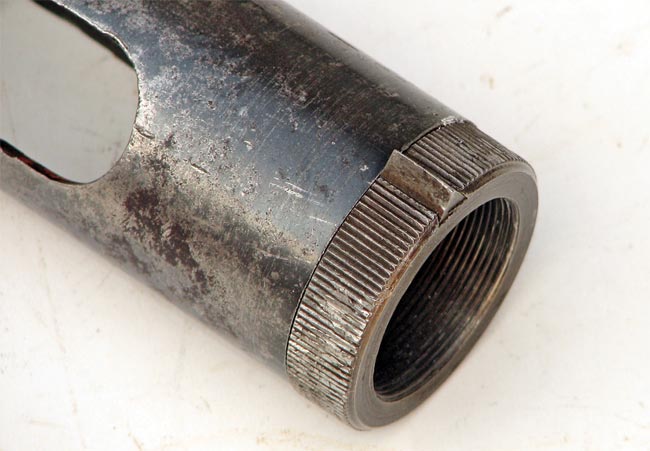 An almost non-existent undersized front sight of the Blyskawica is barely visible even from the side on top of the barrel plug knurled ring.

Gradually, by April 1943 the Blyskawica took shape and prototype drawings were being prepared.  After the design work was done, it was a time to find subcontractors and organize an underground manufacturing network, supplying the parts to the clandestine assembly shop.  In the harsh conditions of German-occupied Warsaw, with tight control held over all machine shops’ activity, shortages and rationing of the cutting tools, with all suitable materials put on the ‘restricted supplies’ list and sold only with a permit from the German administration, this was a very hard task, indeed.  Nevertheless, bribing and stealing their way, working in Wielanier’s private flat, by September 1943 they managed to manufacture and assemble the first working model minus a barrel and a magazine – which they chose to borrow from the British Sten to overcome the unsurpassable production bottlenecks.

Official Acceptance
The gun was submitted for approval to the Home Army Ordnance Command, for test-firing in the woods around Warsaw’s suburb of Zielonka, and approval.  Formal acceptance into the inventory of the clandestine army meant, among others, that the designers would be refunded their private money spent so far on the gun.  The acceptance test was the first opportunity for the Blyskawica to really shoot after a Sten barrel and magazine borrowed for the occasion were installed.  Problems were therefore inevitable.  At first the prototype refused to fire at all, and then suffered numerous malfunctions.  But Wielanier was able to rectify the situation with what simple tools were available – and jams decreased.  Finally, the gun fired an entire magazine in a single burst, and the project was given a green light to start.

The Home Army HQ Diversionary Directorate’s commander, Colonel Emil ‘Nil’ Fieldorf (a brave and intelligent man, a pre-war career officer parachuted to Poland as early as 1940; after the war murdered in a courthouse farce by the Soviet-backed Polish Communist regime), was briefed of the new invention and demanded an additional live-firing demonstration.  This was held in the most daring – if a little cavalier – way.  At high noon on September 27, 1943, right on the painful fourth anniversary of Warsaw’s surrender in 1939, right smack in the middle of the enemy-occupied city, a party of three raincoat-clad men stepped out to the center of the crowded Theatrical Square, in front of the Warsaw City Hall.  One of them reached under his coat, raised a shiny silvery prototype submachine gun and performed a classic ‘magazine dump’ into the air, to the delight of the cheering crowd around and to the horror of the two bodyguards flanking the Colonel; himself grinning like a child on a Christmas morning. 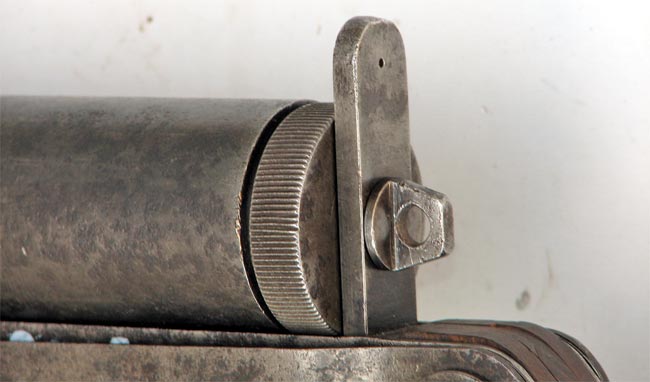 After going through all the trials with flying colors, the gun was accepted for serial production, which meant that the designers had to prepare a complete set of drawings for the gun.  These were ready in October, 1943.  While en route to the Home Army Command with this complete set of drawings in his briefcase, Mr. Zawodny narrowly avoided being arrested in one of the frequent German Police raids, when a section of the street was cordoned-off, and all people rounded-up to be later sorted out by the Gestapo.  Most of the people caught up in these manhunts were then deported to Auschwitz even if they weren’t suspected of anything – just to spread terror to the others.  One can only imagine what would happen if he was caught with a briefcase full of clandestine submachine gun blueprints.

The name Blyskawica (Lightning) came from the three lightning bolts carved in the aluminum butt-plate.  These were designed to prevent slipping of the plate but also served as a camouflage – the butt-plate’s blueprints were labeled ‘electric oven handles’ and the three lightning bolts were a trademark of the Electrite brand.  The name was made official in November, when a first pilot batch of five was accepted by the Home Army Ordnance Command.  To mark the unusual occasion, key personnel connected with the design and manufacturing of the first batch were presented with petrol lighters – which Wielanier was making as a business before he turned to gun manufacturing.  Each lighter was engraved with two legends: ‘Polish Industry, November 1943’ on one side and ‘Christening of Blyskawica on the other.

A Lightning for the Failed Tempest
In order to avoid compromising the entire program should the Germans discover one manufacturing plant, and to speed up the delivery, parts were contracted from over twenty various manufacturers scattered throughout the entire city.  A chicken-wire factory, Franciszek Makowiecki & Co., located at 20 Grzybowski Square in Warsaw, was tasked with the final assembly and test-firing of the submachine guns.  The clandestine SMG plant was situated under the workshop, in the cellars of a nearby Roman-Catholic Church of All Saints.  An additional concrete-lined tunnel acted as an underground shooting range for functioning tests.  The walls of the tunnel were doubled, with space left between the two layers of concrete walls to suppress the report of the firing guns, and a sandpit was installed behind a wall of wooden railway ties as a bullet stop.  Five people were assembling and test-firing the guns: the testing being performed strictly during the rush hours to use the street noise as means of additional sound camouflage.  All through this time where people were present in the clandestine plant, there was a special look-out on duty in the official workshop tasked with switching the warning light to alarm the assembly workers if anything suspicious was going on topside.  The facilities were mined with explosive charges to blow the workshop up should Gestapo raid the premises and find the camouflaged entrance.