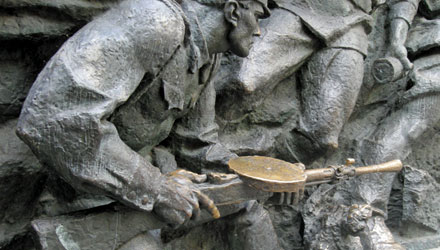 Arms & Security Kyiv is the Ukraine’s yearly military, police, and hunting show.  It is a smaller show than the big internationals, but it is well attended.  The first day was a lot of Ukraine military with a smattering of Russian military as well.  The next two days were comprised of military and police attendees in civilian clothing, and civilian hunting enthusiasts.  There were quite a few knowledgeable people about small arms, with their orientation towards the old Communist Bloc weaponry.  However, the Western influence can be seen in many designs, with European weapons from FN Herstal and B&T moving into the military and LE communities.

In the Ukraine, private ownership of handguns is difficult if not impossible for most.  Ukrainians as a whole are very interested in handguns, so to adjust to the “no real bullets” laws, most self-defense handguns are made to fire special caliber rubber bullets in .45 and 9mm calibers.  These are classified as “Traumatic pistols.”  At the show, most handguns could be seen in both standard and “Traumatic” configurations.

The indigenous arms industry appears to be doing well, with a number of quality manufacturers up-grading or modifying older designs, and adapting to the world market. 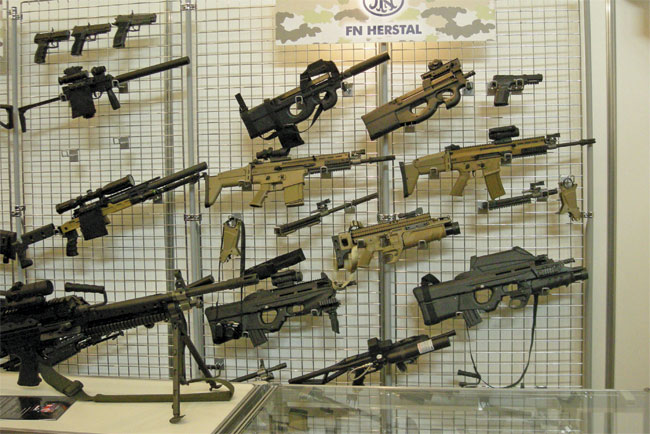 Tactical-Systems from Kyiv is a distributor of law enforcement and military products that represents many international firms. Two of their mainstays are B&T in Switzerland, and FN Herstal, whose products are shown. The Tactical-Systems booths were packed for the entire show with attendees.

This AKS74U rifle in 5.45x39mm has received a number of upgrades including rail forend, EOTech optic, side-folding M4 type collapsible stock, and this interesting suppressor from Tactical-Systems in Kyiv. (www.tactical-systems.com.ua) 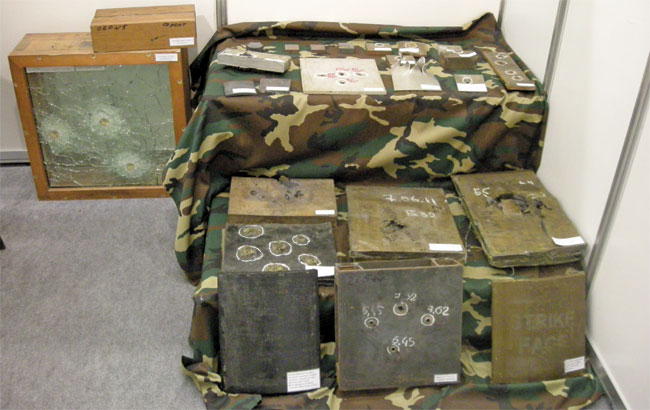 482 Engineering does ballistic testing and design work for many military applications. Testing against all kinds of projectiles and threats is done at their facility, as evidenced by the various calibers/materials shown in the display.

Mayak is a Ukrainian arms company that works on numerous small arms, but the two most interesting pieces shown at the show were the KM-7.62 and KT machine guns as well as the soft ammo pouch for them. These are improved PKM and PKT machine guns and both are lightened significantly. The 200-round hanging soft pouch was of great interest. (www.mayak.com.ua) 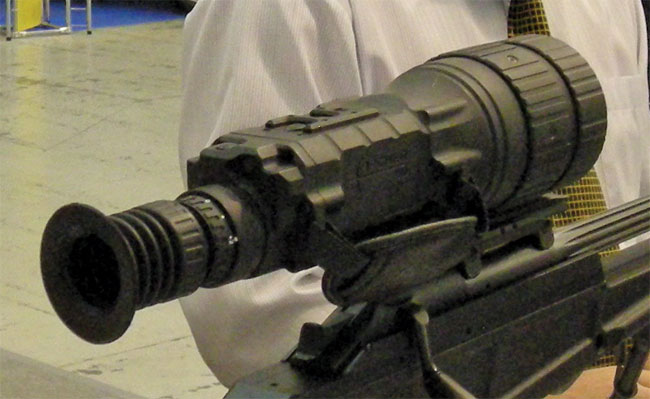 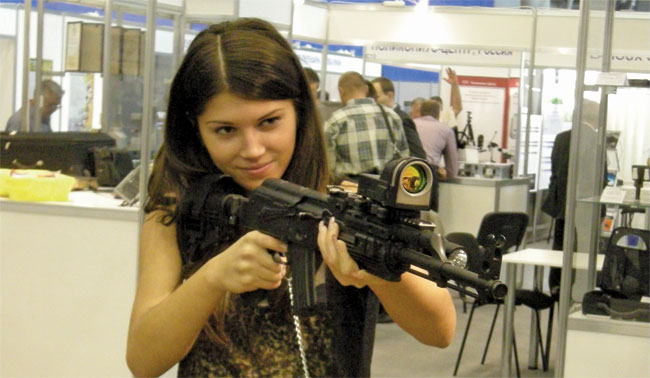 A Ukrainian girl with the FORT-206 sporting rifle. This is a Russian made AKM with a collapsible stock, rail forend, EOTech optic and is semiautomatic in 7.62x39mm. She was with several friends and was overheard to mention “Facebook” as they were taking her picture.

Tags: 2012, Arms & Security 2011, Browning Kurz, Dan Shea, FORT-12, FORT-205, FORT-206, FORT-21.02, FORT-21.03, FORT-221, FORT-224, FORT-301, Galil, Tavors, V4N2, Volume 4
← The 3rd Generation: From the vz. 61 Skorpion Submachine Gun to the CZ Scorpion EVO 3 A1
Rapid Fire Weapons Before Maxim & Browning →
Distributed at trade shows worldwide, Small Arms Defense Journal is a bimonthly publication that focuses on small arms, accessories, gear for the soldier, new products, industry news, and defense trade shows. The first issue of SADJ was Spring 2009, which launched at the LAAD show in Rio de Janeiro, Brazil. SADJ (pronounced “sage”) is targeted toward military, law enforcement, and defense industry professionals. Our job is to reach these groups and tailor content to their interests while producing a publication that is applicable to an international audience.