The Tri-Service Asian Defense and Internal Security Event for Land, Sea and Air and Security Exhibition was held at the IMPACT Exhibition Center in Bangkok, Thailand, November 4-7, 2009.

Six years ago in 2003, no one paid much attention when Thailand announced its first Tri-Service military exhibition.  Nevertheless, the show went on and turned out to be a success.  Since then the bi-annual event has gone from strength to strength.

The 2007 exhibition had over 20 major international exhibitors from 28 nations.  Visitors arrived from 47 countries and with the addition of the Internal Security section results were even more impressive.

Defense & security 2009 was the biggest show yet and ranks the event as one of the most important Tri-Service defense and security exhibitions in Asia.  It is fully supported by the Thai Ministry of Defense.

Hosting over 300 world-class military manufacturers from fifty countries, the show was at least 15% larger than 2007.  The latest technology and developments in weapons systems, UAVs, missiles, tanks, guided weaponry, launchers, transports, armored vehicles and marine vessels were on display. 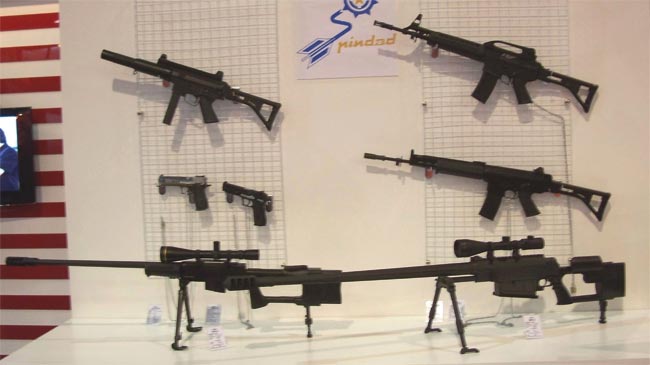 The Remington 700 Federal in 7.62 NATO with 10 round detachable magazine is based upon the legendary M24 Sniper Weapons System (SWS) and features a host of significant modern upgrades with an effective range of 800-1,000 meters. (www.remington.com) 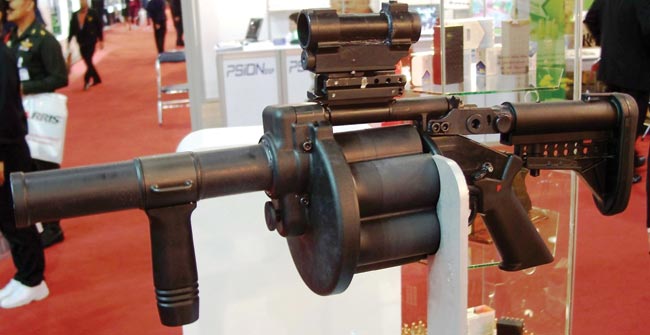 Rippel Effect Weapon Systems (Pty) Ltd from Hatfield, South Africa showed their MSGL40, their latest generation 40mm multi-shot grenade launcher. The MSGL40 is a light weight multi-shot grenade launcher designed as a tactical and flexible force-multiplier with extreme firepower. This weapon offers pinpoint accuracy at 150 meters and has a maximum range of up to 400 meters. Also shown was their GRN40 all-weather reflex sight developed for use wit the MSGL40. The system can be used in daylight and in complete darkness. (www.rippeleffect.com) 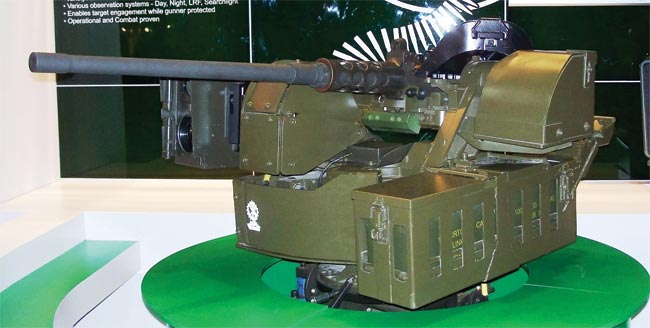 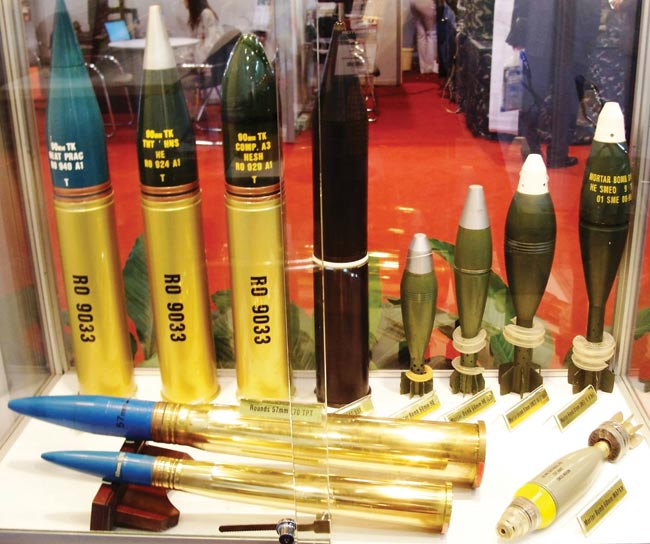 SME Ordnance of Selangor Darul Ehsan, Malaysia, had humble beginnings in 1969 as a manufacturer of small caliber ammunition for Malaysia’s defense needs. Today, SME Ordnance has become a leading manufacturer of defense related products for the Malaysian and global defense industry. SME Ordnance’s production capability now includes the manufacturing of a broad range of small, medium and large caliber ammunition and pyrotechnics. They also make the M4 carbine manufactured under license from Colt Defense LLC. (www.smeordnance.com.my) 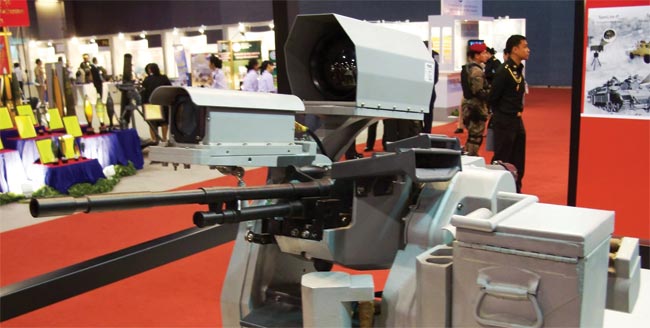 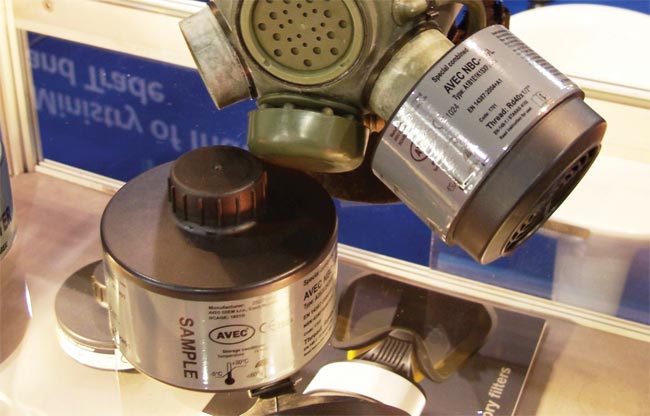 Two of Saab’s 84mm multi-purpose weapons systems. The AT4 (rear) is available in several different versions: High Explosive Anti-Tank (HEAT) and Anti-Structure Tandem (AST). Both of these are available with CS technology. The AT4 is incredibly simple to use and extremely effective against a variety of targets. Key features include single soldier operation, High Penetration (HP) and Reduced Sensitivity (RS) munitions (HEAT version), ideal for urban warfare (CS version), elimination of back blast and reduced signature (CS version), lightweight and disposable, and dual purpose (AST version). The highly versatile Carl-Gustaf (front) is a true multi-purpose, man portable shoulder fired weapon. The system’s capabilities include anti-armor, ant-structure, smoke, illumination, and anti-personnel rounds. The M3 version of the launcher features significant weight reduction and improvements for urban operations. Shown with the telescopic sight 557B. 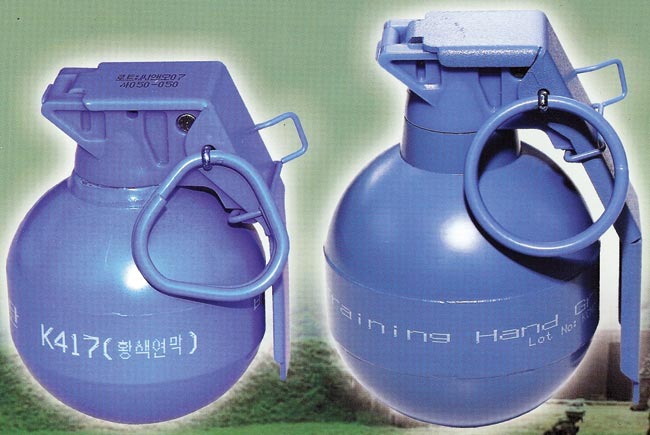 Korea CNO Tech co., Ltd. of Seoul, Korea, has developed the world’s first eco-friendly non-metallic training hand grenade. The grenade is made of naturally degradable materials using clay and mineral powder for form the bomb body and bio-degradable plastic for the fuse body. These materials are not only eco-friendly, but most importantly safety in training. Its explosion causes no harm or injury to the trainees so it can be thrown directly toward people during military training. (www.cnotech.com) 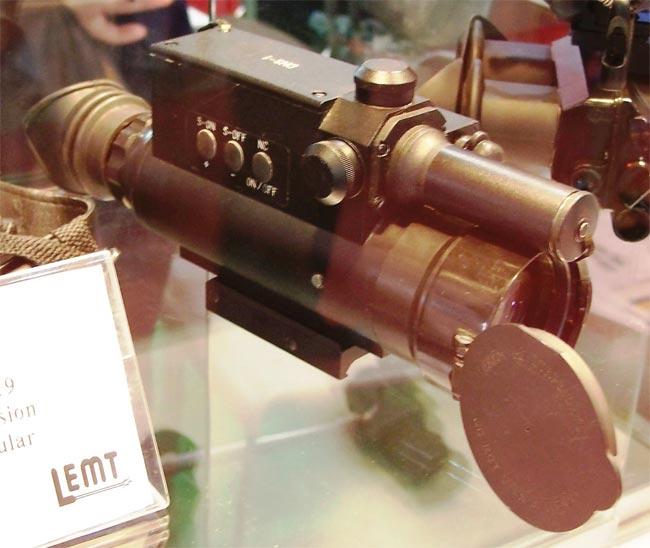 The state-owned foreign trade unitary enterprise Belspetsvneshtechnika of Minsk, Republic of Belarus displayed a number of electro/optical equipment including hand-held thermal imaging systems, thermal weapons sights, and night vision sights. (www.bsvt.net) Pictured: Day and night sight DNS-1 designed for aiming automatic small arms as well as for observing during daytime and under natural night illumination conditions as of the moon and stars. The sight can be mounted on weapons with side guide (version I) or be mounted on weapons equipped with a Picatinny rail (version II).
by Robert G. Segel on 25 August, 2011.
Tags: 2010, Defense & Security 2009, Robert G. Segel, V2N2, Volume 2
← International Legal Affairs: Volume 2, Number 2
Air Gunners Memorial at the Yorkshire Air Museum // York, U.K. →
Distributed at trade shows worldwide, Small Arms Defense Journal is a bimonthly publication that focuses on small arms, accessories, gear for the soldier, new products, industry news, and defense trade shows. The first issue of SADJ was Spring 2009, which launched at the LAAD show in Rio de Janeiro, Brazil. SADJ (pronounced “sage”) is targeted toward military, law enforcement, and defense industry professionals. Our job is to reach these groups and tailor content to their interests while producing a publication that is applicable to an international audience.