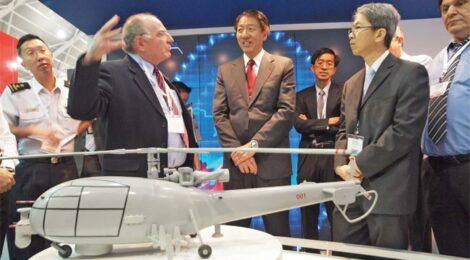 Over 150 exhibitors from 23 countries gathered in the sunny Singapore Spring for IMDEX 2009.  This was the seventh biannual IMDEX, and it was opened by the Deputy Prime Minister and Minister for Defence, Mr. Teo Chee Hean.  While this is a Naval show, not a small arms show, SADJ had come to the show on business, and we were pleased with the opportunities there.  This is a professional show, and it is well run.  Interestingly, more than 20 warships from over 14 countries were on display as well, and the attendees could board many of them.

Over 5,500 trade visitors from 55 countries and 45 delegations from 36 countries filled the 10,000 sq. meter building.  This was also the first year that the U.S. set up a Country Pavilion, and there were nine Country Pavilions in total.

As noted, small arms were not in evidence in the displays.  However, concurrent with the exhibition were conferences and seminars and number of them were quite timely and relevant to our small arms defense related readers.  These included:

SADJ Recommendation: if you have interest in the Naval side of things, this is a good show to attend and set up at. If not, then there are more small arms oriented shows in the area- Defense Services Asia in Kuala Lumpur, IndoDefence in Jakarta, Defense & Security Thailand, and BRIDEX  in Brunei to name a few.

Manufacturers and suppliers of: