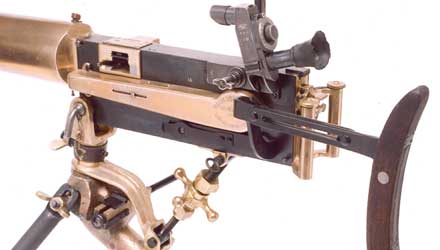 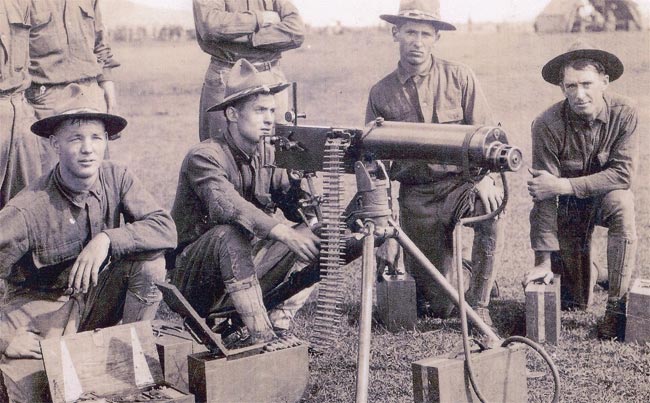 History
2004 marked the one hundredth anniversary of the adoption of the U.S. Maxim Machine Gun, Caliber .30, Model of 1904.  This was the first rifle caliber heavy machine gun approved for use as the standard service type by the United States Army.

The army was interested in the new Maxim gun as early as 1887 and procured examples of the World Standard Maxim machine gun Model 1889 and Model 1900 for testing purposes.  It took another seven years of sporadic testing with fits and starts before the Chief of Ordnance finally gave approval for adoption in 1904.  An agreement was reached with Vickers, Sons & Maxim, Ltd. (VS&M) and an initial order was placed for 50 guns and tripods to be produced at the VS&M Erith Works facility in England in the U.S. caliber .30-03.

The Ordnance Department, wanting the gun to be made in the United States, enlisted the Colt’s Patent Fire Arms Company to make the gun but problems arose concerning the drawings and seemingly arbitrary changing of engineering specifications and tolerances by U.S. Ordnance personnel, which caused a several year delay before Colt could start production.  Eventually, the design specifications reverted back to the original VS&M drawings.  In the meantime, the Ordnance Department placed another order for 40 guns with VS&M.  Thus, the first 90 production guns for the U.S. Maxim Model 1904 were produced in England by VS&M with serial numbers 1-90.  When Colt finally began production in 1908 they continued with the serial number sequence for the model type.  The first Colt produced Maxim Model 1904 gun had serial number 91.  Additionally, by 1908, the service cartridge had changed to the .30-06.  The 90 VS&M guns were retrofitted to accept the new .30-06 cartridge while Colt manufactured all their guns in .30-06.  In all, there were 287 Model 1904 Maxim’s produced.  The first 90 guns (serial number 1-90) were made by Vickers, Sons & Maxim in England and the remaining 197 guns (serial number 91-287) were made by Colt’s Patent Fire Arms Manufacturing Company. 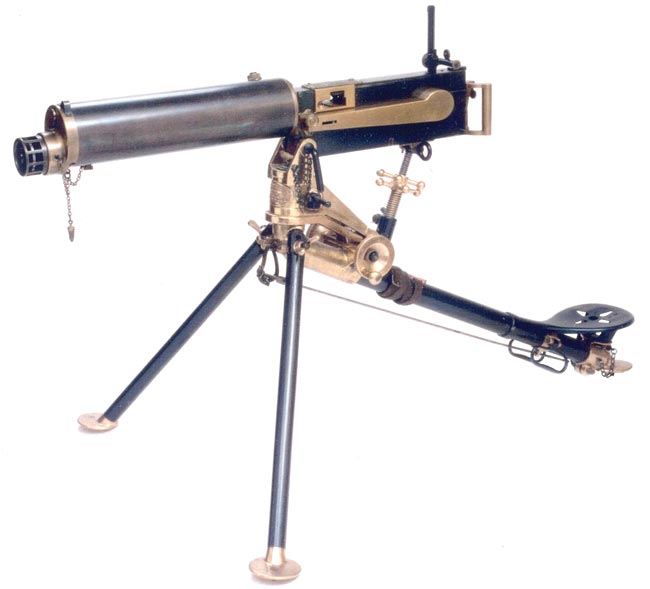 Left side of the Colt manufactured Maxim Model of 1904 mounted on the 1904 tripod. Note the one piece cleaning rod hanging underneath the trailing leg of the tripod. 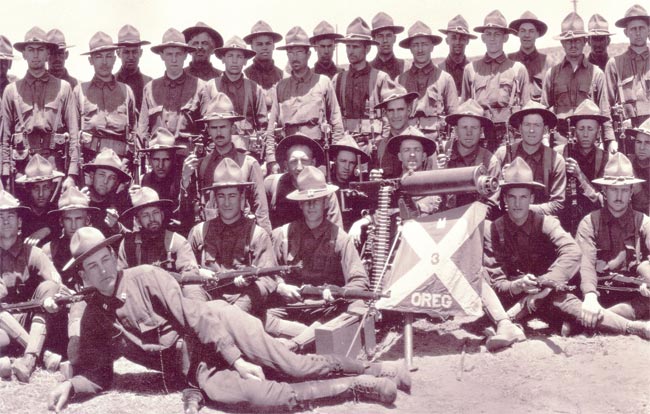 Company M of the 3rd Oregon pose with the 04 Maxim in Calexico, California in 1916.

Accessories
Accessories for the Model 1904 Maxim included a tin lined wooden water box denoted by a 1-inch white stripe painted longitudinally around the box, a wood tool and spare parts box denoted by a light blue stripe and a wood belt filling machine box denoted by a red stripe.  All these boxes were of the same size and dimensions as the wood ammunition box with sides and ends dovetailed together and the bottom secured by screws.  All parts (hinges, handle and clasp) of the boxes are recessed so as to be flush with the surface.  04 Maxim boxes all had a fold down metal carrying handle as opposed to the later same size and color coded wood boxes of the Colt Vickers Model of 1915 which had leather handles.  The ammunition box contained one 250-round belt made of a composition of linen and flax.  The pockets being formed by brass strips securely riveted to the web portion of the belt.  Ordered accessories included a total of 6,434 ammo boxes, 1,344 water boxes and 7,144 ammo belts.  The one piece brass and steel cleaning rod was mounted under the trailing leg of the tripod.  Originally, there was no steam condensing hose for the gun as it had not yet been determined that a large white steam plume emitting from the water jacket steam escape port would be a problem in combat situations as it was envisioned that the guns would be placed at the rear by artillery units.  By 1913 that need was recognized and a rubber tube device was developed that was held to the water jacket by means of a supporting leather band.  The tubing is connected to the band by a chain and holder.  A nozzle at one end of the rubber hose fit into the steam escape port in the water jacket cap.  Seldom used, this device can be seen in a few rare photos. 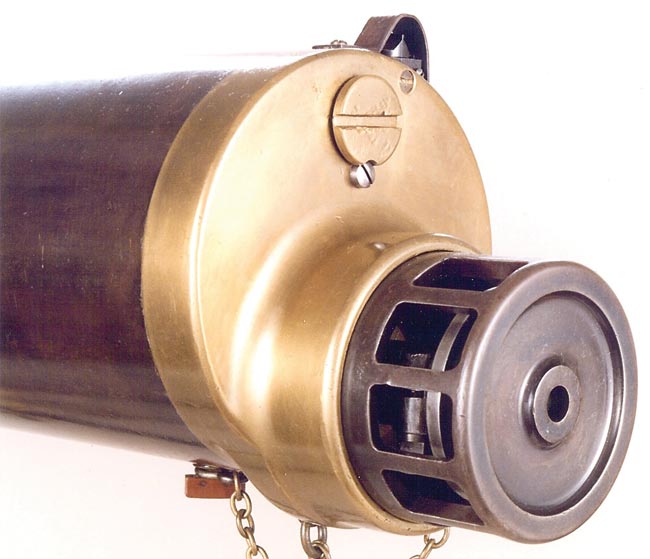 The distinctive large muzzle booster (it is not a flash hider) of the 04 Maxim makes this weapon easily identifiable.

Usage
The 04 Maxim was issued to U.S. infantry companies and to cavalry troops.  Each machine gun company or troop was issued four guns including tripods, ammunition, spare parts, tools and accessories, together with the necessary packs.  Mules were the primary means of transport for the guns and equipment and each company or troop was issued twenty mules being made up of four sections of five mules each.  The 04 Maxim was a well made weapon; reliable and dependable as Maxim guns were noted for.  But, the gun was not popular with the men in the field.  The 04 Maxim had the distinction of being the heaviest Maxim ever produced weighing in at a total of 145 pounds (gun with water – 65 pounds, tripod field mount – 80 pounds).  It took specially trained troops to set up, operate, clear, repair, take down, pack and unpack for transport on animals that carried the equipment.  Nevertheless, the 04 Maxim was widely used and saw service in such distant outposts as the Philippines, Hawaii, Mexico, Central and South America yet never really saw combat service being relegated to training purposes.  The gun was not used overseas in World War I but remained in the U.S. as a training weapon.

With about a dozen U.S. 04 Maxims being transferable on a Form 4 surviving today, and a few more in museums, it is generally considered to be the rarest and most desirable classic U.S. machine gun on the collectors market and, surprisingly, the 04 tripod is even rarer than the gun as they were salvaged for their high brass content.  This weapon is certainly a prized centerpiece of any classic machine gun collection.

Description
The Maxim Automatic Machine Gun, caliber .30, Model of 1904, belongs to that class of automatic guns in which the force of recoil is utilized to operate it.  After the first shot the gun is self operating until the ammunition in the cartridge belt is exhausted or until the trigger is released.  The force of the recoil opens the breech, extracts the empty case, and inserts and fires the next cartridge.  In firing, the action of the mechanism is as follows: The barrel and lock (bolt) move to the rear a short distance.  At the end of this recoil the lock is drawn back from the chamber, thus opening the breech and at the same time drawing a loaded cartridge from the belt and extracting the empty case from the chamber.  During the last part of the motion of the lock the empty case and the loaded cartridge are lowered until the latter is in line with the chamber and the former with the ejection opening.  Under tension of the recoil spring, which the movement has extended, the lock then travels forward, the fresh cartridge is pushed into the chamber, the empty case is pushed into the ejector opening, the belt is fed forward one round, and the carrier and barrel finally returned to the firing position.  During the recoil the firing pin is cocked, and unless the trigger has been released the sear is struck at the conclusion of the movement described above, and the gun is again fired. 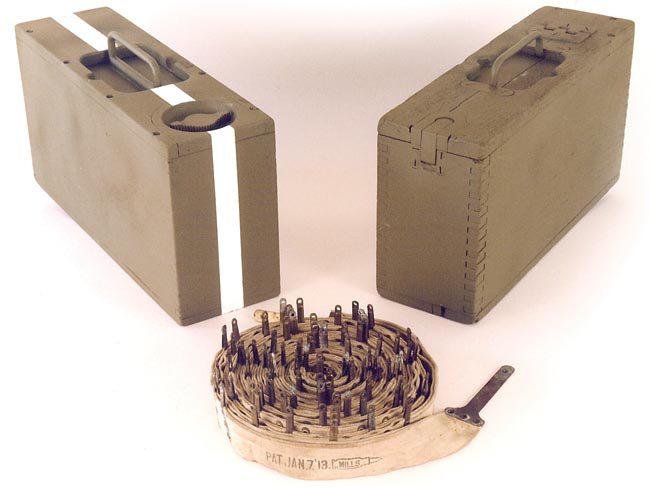 The water box, denoted by the longitudinal white stripe, is of the same external dimensions as the ammunition box. Note that both boxes have the correct period folding metal handles. The 250 round ammunition belt shown here was manufactured by Mills and has a patent date of January 7, 1913.