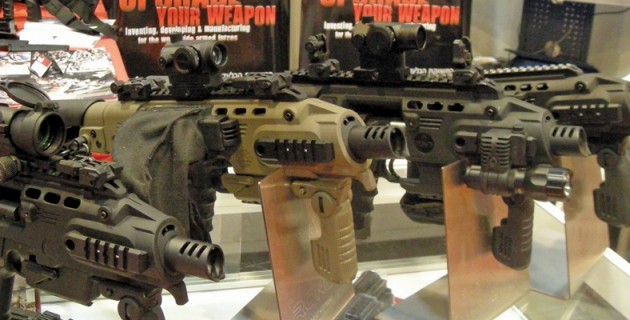 ABOVE: CAA Tactical is a manufacturer of accessories and platforms for modern rifles, and featured the RONI Pistol-Carbine conversion unit shown in the photo with the Bul Carmel pistol converted to the PDW configuration. Their booth was constantly mobbed by IDF and Police personnel that were very pleased with the products. www.caatactical.com

This was the fifth year in a row that the ISDEF show was put on in Tel Aviv.  It shows strong growth and the show has expanded from last year.  What started out as a show sponsored by large contractor TAR Ideal Concepts, Ltd. to gather their associates and customers together, has turned into a small but increasingly world class event.  We booked SADJ in for 2013’s show, of course.  The promoters have decided to switch to an every two year format, like many other military shows.  This gives the attendees time to work on their contacts and prepare for the next show.  Show date has also been switched to June 2013.

Tel Aviv is an excellent location for this show as there is plenty of infrastructure to handle the convention traffic.  The weather is excellent, and the hotels are used to international travelers.

Coming to ISDEF allows both the attendee and the exhibitor an opportunity to interface with regional suppliers of defense and LE material, as well as see the latest in hi-tech rescue equipment.  The Israeli military and police are under constant stress due to the regional conflicts they’ve been involved in since the start of their country, and the training expertise is on display at ISDEF along with the hardware.  While some of the larger international contract groups were present, the home-grown Israeli variety was predominant.  The electronics arena was a place where there are almost daily leaps of technological and doctrinal advance, and soldier communications was a major feature at the show.

An interesting anecdote regarding a Chinese made demilled 81mm Mortar that was used as a show-stopper in a booth:  A PLA Major General and his staff were looking at the 81mm.  The General asked “Where did you get this?” someone responded; “Captured from Fateh.”  To which the general sagely nodded his head and replied; “Ah, they must have stolen this from us.”  Everyone had a good, but slightly uncomfortable laugh. The visitors at the show included many embassy and military personnel from a variety of nations. Shown here are a number of Generals and their staff from the Chinese PLA (People’s Liberation Army). This group was very interested in the soldier integration systems for field control and communication, and the multi-media/integrated environment training simulation programs from CTI (Computech International). CTI has a long history of integrating their computer solutions onto vehicles for the U.S. and other international customers.

– Highlights of Attending Companies Not Shown –

Barnes Bullets
Barnes Bullets, well known for their high-quality, extremely accurate hunting ammunition, moved into accurate military/LE ammunition a few years ago.  Thad Stevens, Lab Manager at Barnes, had a booth set up at ISDEF, and experienced first-hand the quality customers at the show in his discussions with knowledgeable snipers and other end users.  Barnes’ products are up-and-coming on the world scene for military snipers.  www.barnesbullets.com

Eltics
Eltics, Ltd. is an Israeli company that has developed a stealth technology that works towards defeating thermal imaging, night vision, and heat-seeking missiles.  An active thermal signature is generated so that an armored vehicle is invisible to thermals, or appears to be something else.  www.eltics.com

WMD Tech
WMD Tech is a U.S. based company that presents training for bomb technicians, among other skill sets.  They offer most of the tools of the trade, with a very inclusive catalog of electronic and mechanical devices.  At ISDEF, WMD Tech also represented Snake River Machining’s combat shotguns which have a very intriguing 8, 12, or 16 round feeding capacity, and HTG’s full line of firearms suppressors that are user maintainable for disassembly.  www.wmdtech.com 60 year-old Israeli manufacturing company Englander, Ltd. is a well known tool and die maker, and has been supplying OEM weapons manufacturers with steel M16/AR-15 type magazines, as used in the Tavor rifles as well. These high strength magazines are offered in 10-, 20-, 30-, and 40-round configurations. The high-resistance anti-corrosion coating withstands more than 96 hours in salt-spray tests. (www.englander.co.il)

Gilboa rifles are from the Israeli company Silver Shadow. This is the same group making the Corner Shot round-the-corner platform for handguns, short carbines and 40mm launchers. The Corner Shot is now pretty well known. Perhaps the most interesting information was that IMI’s weapons designer Efraim Yaari is now with the Firearms Laboratory Development group at Silver Shadow. The two most important things in this writer’s opinion are their 7.62x39mm piston operated M16 clone with AK magazines, and the APR. Mike Shklyar, International Sales Manager for Newcon Optik, presented two of the company’s newer offerings along with their standard line. The LRB6000CI 7x50 laser range finder gives excellent range identification up to 6 km and is gaining in popularity due to that accuracy. The NVS33 clip-on night vision unit mounts either forward of the regular optic on the front rail or it can screw in to the front of the optic. (www.newcon-optik.com) Guenter Schrotzhammer from Surefire with customer in the Surefire booth. Surefire’s tactical lighting series and their military/LE suppressor line were quite popular with attendees. (www.surefire.com) Ryan McMillan, VP of McMillan Group International, had the TAC-50 on display and there was a lot of interest in this rifle, as well as their smaller offerings. Considering that the IDF has recently moved towards .338 Lapua Magnum, this interest in the smaller platforms is to be expected. Perhaps the most interesting item shown was McMillan’s new compact rifle that disassembles into a very small package for portability and discreet deployment. (www.mcmillanusa.com) Nammo’s line of Initiators was offered at ISDEF. This is a well-thought out product line, based on a Starter unit. The explosives tech can spec the Starter and build from there according to his needs. Dave Hallaran from US Ordnance showing some IDF soldiers around the US Ord product line. Dave and Steve Helzer (not shown) presented the US Ordnance QCB .50 BMG M2 and full product line, with special attention to the US Ordnance MK43 Mod 1 (M60E4) as shown. In this picture the compact package of firepower in 7.62x51mm can really be seen, as the option of the Elcan Optic on the rail top cover, and the AN-PEQ2 on the forward side rail complete the package. (www.usord.com) SADJ met with Tomar Avnon, CEO of TAR, who is a very interesting man. TAR bills themselves as a one-stop-shop for all defense related products from training to material to weapons, and their offerings bear this out. The ISDEF conference started as a TAR private show and over five years has expanded significantly, and is now a highly respected military trade show. (www.tarideal.com)
by Dan Shea on 23 May, 2013.
Tags: 2013, Dan Shea, ISDEF 2011, V5N1, Volume 5
← ASDA 2013 – Armalite AR-30A1
Galil Ace 5.56 →
Distributed at trade shows worldwide, Small Arms Defense Journal is a bimonthly publication that focuses on small arms, accessories, gear for the soldier, new products, industry news, and defense trade shows. The first issue of SADJ was Spring 2009, which launched at the LAAD show in Rio de Janeiro, Brazil. SADJ (pronounced “sage”) is targeted toward military, law enforcement, and defense industry professionals. Our job is to reach these groups and tailor content to their interests while producing a publication that is applicable to an international audience.