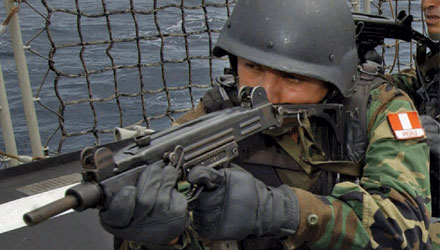 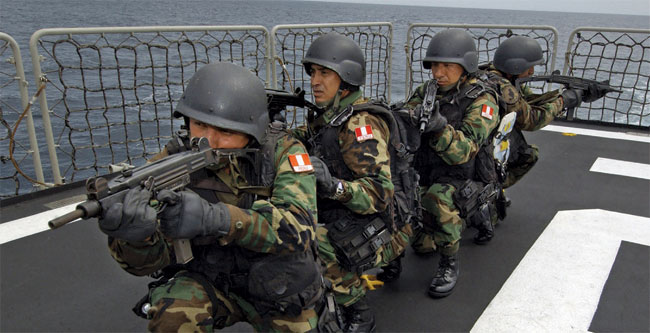 About one week prior to our visit to Lima, the die hard guerrillas of Sendero Luminoso (Shining Path) had ambushed an Army patrol, killing all 14 soldiers.  The region known as VRAE (for Rivers Apurimac and Ene Valley) has become a hub of military activity with soldiers and police officers chasing the Sendero Luminoso guerrilla group, which has resurrected in a narco-guerrilla form.  The extremist Maoist Shining Path guerrilla group was decimated in the 1980s, but a core of some 300 insurgents escaped to the Vizcatán region.  The insurgents found fertile ground in that isolated area, allowing for recruitment and enrichment by partnering with drug producers.  The military has responded with the establishment of the VRAE Military Region, operating along Pasco, Junin, Huancavelica, Ayacucho and Cuzco, in order to fence-in the insurgents.  Lewis Mejia Prada, a well known Peruvian military journalist and our contact in Peru, tells us that a Special Operations Detachment has been deployed in this area, comprising elements of the 1st Spec Ops Brigade (Army – DRIFFE), Air Force (FAP) Special Forces Group (GRUFE), Naval Infantry and Naval Special Operations Forces (FOES).  The SF teams consist of platoons of 16 men each, divided in two patrols of 8 commandos.

Lewis Mejia explains that the military has a long history and a lot of experience in mountain and jungle warfare.  The military spends considerable resources fighting the drug trade, in the cities and mountains, and now has to contend with narco-guerrillas.  The Navy and Marines are charged with assisting civilian authorities in detecting and intercepting illegal traffic along the coast and waterways while the Army divides its forces in four operational military regions: Northern, Center, Southern and Eastern.  The Northern Region handles the 7th and 32nd Infantry Brigades, and the 1st Cavalry Brigade, along with the 1st Reinforced Infantry Brigade and the 6th Jungle Brigade.  The Southern Region controls the Francisco Bolognesi College, Bolognesi and the José Gálvez Tactical Groups, the 3rd Armored Moquegua Brigade along with the 3rd Cavalry Brigade, the Service Brigade, and the 4th and 5th Mountain Brigades, together with other support units.  The Central Region handles the 2nd and 31st Infantry Brigades, the 18th Armored Brigade, the 1st Army Aviation Brigade, and two Special Forces brigades (1st and 3rd).  To carry out its tasks and duties, the Peruvian Armed Forces have a large and much diversified small arms arsenal that goes beyond the technical need for weapons to accommodate diverse terrains.  This must be a real headache to the logistical branch. 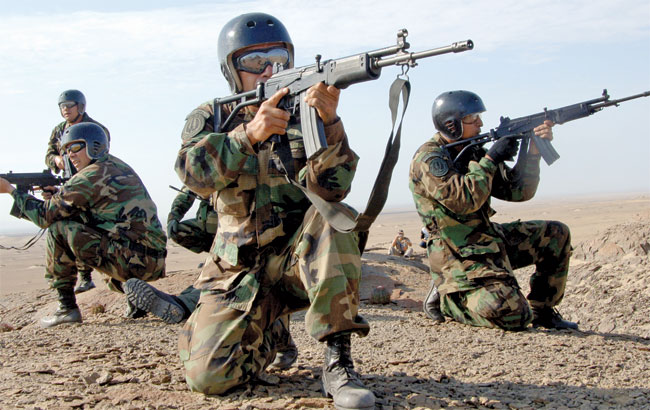 Small Arms & Infantry Weapons
In the 1970s the Army established Indumil-Peru, a small arms manufacturing, maintenance and development complex in Lima.  However, the enterprise was eventually disbanded, and the only remaining structure today is the Ammunition Manufacturing Establishment (FAE – Fabrica de Municiones del Ejercito), charged with the production of small arms ammunition.  The standard Army rifle is still the very reliable FN-FAL 50-62, along with the AKM.  Selected outfits use the Galil SAR, and HK MP5KA-1, SD, Uzi and Mini-Uzi SMG.  The Browning DBA in 9mm is widely available, and the Comandos Parachutec (Para Commandos) and Special Forces Brigade make use of the South African Vektor CR-21, along with 5.7mm P-90 PDWs and Winchester 1300 Defender shotguns.  They also prefer the Barnett-Velocispeed arch for silent killing.  The Army has received quantities of Minimis, and the equivalent M249, and it uses large numbers of PK and PKM types.  The antitank teams run mostly with RPG-7V and RPG-22, but since 1976 the Army has been using the 9M14M Malyutka (AT-3 Sagger B), and also operates a small number of 73mm SPG-9 Kopye RCLs.  Mejia Prada tells us that the Galil rifle is the preferred rifle of elite and Special Forces, particularly in the most recently developed Macro variant.

The Special Group from the Air Force (GRUFE-FAP), a base security outfit, carries the AKM and Galil; and several of the AKMs have been equipped with the NL-64 Nogaline night scope, or the IMI Elcan III sight.  The large arsenal of small arms includes the M4 Carbine with M203 grenade launcher, the BXP and Mini-Uzi SMGs equipped with laser AIM1/D designators.  The preferred sidearm is the Vektor SP-1 pistol.  Snipers for all services are known to use the Barrett models, SR-99 with Nimrod 6×40 telescope or Herstal FN-1827, Steyr SSG-69, and AW-50.  The GRUFE fields some 15 BRDM-2 and 12 BTR-60PB for airfield perimeter defense, and the Sa-16 Igla-1 missiles are distributed along the 118th Air Defense Squadron.

Marine officers and NCOs field Browning HP and Beretta 92F pistols.  Their issued rifles include the Korean K2, Galil SAR, and the FN FAL 50-63.  The Marines have adapted the Milkor MGL-6 to the Galil with a MGP-56 attachment designed and made in Peru.  The FOES (Peruvian SEALs), carry M16A1 and AKM rifles, and MP-5 SMGs.  FOES divides its operators in Groups, with GOE-Center based at Callao, GOE-North at La Cruz, and GOE-Northeastern at Iquitos (and specialized in Riverine ops).  With the Marines we mention Puerto Maldonado Naval Riverine Captainship, operating along the Amazonian with the river gunboat BAP Tambopata, and 28 Boston Whaler Guardian LIR (Speed Interdiction Launches), each equipped with one M2 and two light machine guns and one Milkor MGL. 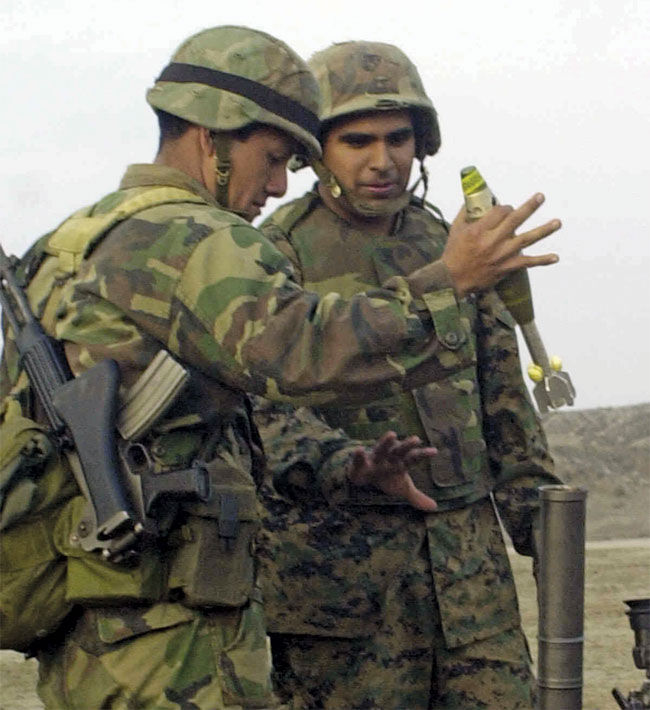 The German-designed HK-53 and MGP-79A, MGP-87 and the Mini-MGP-84, designed and built by the Naval Industrial Services (SIMA) are small arms widely used.  The Weapons Manufacturing Center (SIMA-CEFAR) has successfully developed and fielded a series of submachine guns, all using the MGP prefix (for Marina de Guerra del Peru).  The MGP-84 would be the first modern sub machine gun made in Peru, consisting of a very compact weapon with no exposed barrel and depending on a telescopic bolt.  As with the Uzi, the magazine well for the MGP-84 is located in the pistol grip, and the magazine is interchangeable with the Uzi models.  The Micro MGP-14 is a semiautomatic handgun variant of the Mini MGP-14 and the MGP-14 pistol carbine that entered production in 1990, and both are based in the MGP-84 and MGP-15 SMGs.  The MGP-14 is heavier than the MGP-84 since it is built with a heavier bolt and metal for better control in automatic fire while the pistol carbine variant is basically a MGP-84 designed to fire in semiautomatic only and was designated for security forces and civilian market.  The MGP-15 is a follow up variant developed to replace the Uzi (although this has not been the case), and it also sports a wrap-around bolt with the same layout of the Israeli model, with the magazine fitting in the pistol grip well and operating in the blowback method.  The folding stock seconds as a handgrip.  The SMG came into service as an updated version of the MGP-84 in 1990 and is also chambered in 9mm Parabellum with a rate of fire of 700 rpm.  The weapon measures 490 mm (19.29 inches) with stock extended and 271 mm (10.67 inches) with stock retracted with a 152 mm (5.98 inches) barrel length with 12 grooves rifling to the right.  The weapon weights 2.31 kg (5.09 pounds), and accepts 20- or 32-round magazines.

In 1992, Nicaragua sold excess equipment to Peru, including some 120 Sa-16 missiles.  The Navy quickly adapted a pedestal where a seated gunner was able to operate two ready-to-launch missiles and place them in frigates as last-ditch anti-aircraft systems.  The systems, designated MGP-86, were later removed and used to boost coastal defense positions.  The MGP-86 was so successful that now Russia markets a similar system as the Dzihguit support pedestal, with Mexico being a customer with missiles PZRK Igla 9K38. 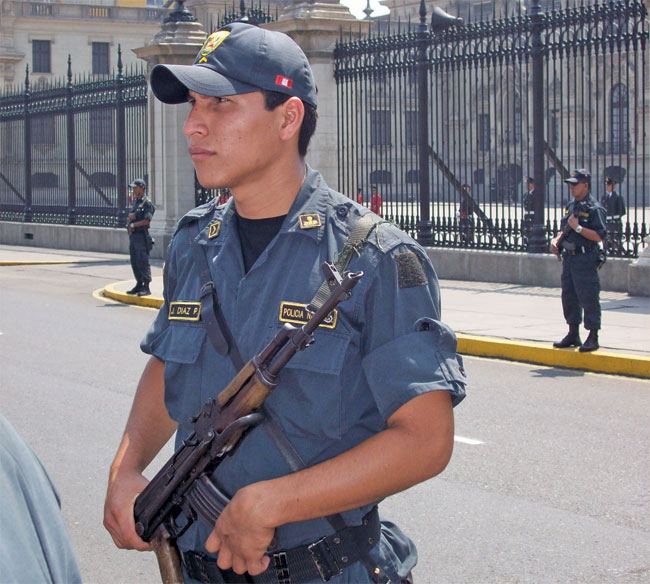 Law Enforcement & the Future
The Peruvian National Police (PNP) uses the AKM as its standard issued rifle, along with the unusual AKM-58 built in North Korea, and MPI KMS-72 built in the former East Germany.  Police snipers use the SVD Dragunov, and the MGS-90 precision rifles.  RPD, RPK-74 and PKM machine guns are widely distributed along with RGD-5 hand grenades.  Elite forces use the HK-53 MP5KA-1, SD, Uzi and Mini-Uzi SMG.  One PNP UR416 armored transport was easily seen at the gates of the National Palace in downtown Lima equipped with a RPD.  Lewis Mejia tells us that the Army transferred some 30 UR-416 to the PNP several years back.  They eventually fell in disrepair, but under the new recovery plan, some ten have been returned to service and deployed around Lima.  The Army retains some 200 UR-416s.

Some anti-narcotics units are fully trained and equipped by the U.S., and their standard weapons are HK53, HK33 or M16/M4 rifles.  The SUAT (Tactical Action Sub-Unit) for instance makes considerable use of the M16A2 and the HK11A1.  The SUAT refers to the PNP’s SWAT equivalent for operations in Metro Lima.  The unit was established on November 4, 1988, as an anti-terrorist outfit.  Each SUAT must attend an 8 week Training in Close Quarters Combat Techniques and Tactics, with parts of the course being provided by advisers of C Coy., 3rd battalion, 7th U.S. SFG.  A few commandos move to VIP security training, sniper, and other specialties.  SUAT responds under the Emergency Units assigned to the 7th Police Territorial Direction, and it is housed at the General PNP Jorge Monje Llanos Police Complex at La Victoria.

As far as the armed forces and police are concerned, the vast and diverse arsenal is in really bad shape, and a good part of this neglect is due to that same diversity of sources.  Under the Strategic Plan 2005-2021 it is hoped to restore and recover much equipment back to service and $650 million have been allocated for the next 4-1/2 years for this purpose.

Peru received a new President in popular elections in mid-2006.  Alan García Pérez will lead the country between 2006 and 2011.  He is not a newcomer, and in fact was elected President in 1985 on a socialist platform.  When leaving his first tenure, García Pérez left behind a country in a social, economical and political turmoil and with the fanatical and extremist Sendero Luminoso group on the raise.  Today, with García Pérez again in power and professing different politics, the country faces a resurgent Sendero Luminoso, which threatens to bring back misery to all Peruvians.

by Julio A. Montes on 11 January, 2012.
Tags: 2011, Julio A. Montes, V3N3, Volume 3
← International Legal Affairs: Volume 3, Number 3
Armalite SPR Mod 1 (with High Speed Magpul Enhancements) →
Distributed at trade shows worldwide, Small Arms Defense Journal is a bimonthly publication that focuses on small arms, accessories, gear for the soldier, new products, industry news, and defense trade shows. The first issue of SADJ was Spring 2009, which launched at the LAAD show in Rio de Janeiro, Brazil. SADJ (pronounced “sage”) is targeted toward military, law enforcement, and defense industry professionals. Our job is to reach these groups and tailor content to their interests while producing a publication that is applicable to an international audience.