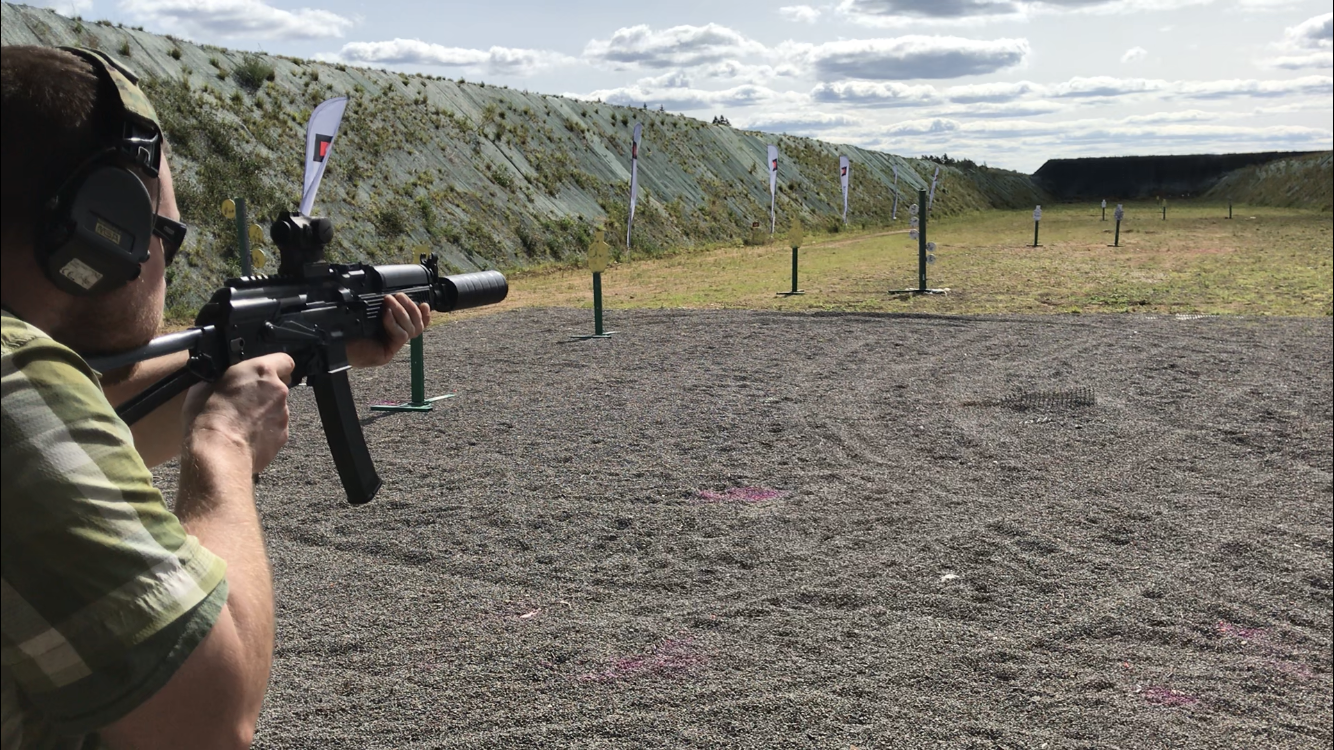 The Rise of the Vityaz

ABOVE: On the range with the Vityaz-SN and a Zenitco suppressor.

In 1993, the Russian Ministry of Internal Affairs requested a new pistol caliber submachine gun for law enforcement applications. Rule of law in the former Soviet Union continued to degrade, and special police units faced new threats from terrorism and organized crime. At the Izhmash Factory, Izhevsk, Russia, Victor Mikhailovich Kalashnikov, the son of the famed AK designer Mikhail Timofeyevich Kalashnikov, went to the drawing board. He teamed up with another legacy constructor Alexei Dragunov, the son of Yevgeny Fedorovich Dragunov, the famed designer of the SVD. Together, the compact submachine gun PP-19 Bizon (Bison) was their answer.

The PP-19 Bizon and its successor, the PP-19-01 Vityaz (Knight) Version 10, are blowback operated, closed-bolt, select fire submachine guns of the Kalashnikov family. Bizon is distinguished by its unusual helical magazine. Depending on the variant, the magazine has a capacity of either 64 9×18 Makarov rounds or 54 9×19 NATO, respectively. The Bizon entered service in 1996 with special law enforcement units but reportedly saw little use.

Although the Bizon’s action was of sound design and lightweight, the magazine had reported issues with reliability. The magazines were not perfectly interchangeable between other guns as intended, meaning that each magazine matched its parent gun for proper feeding. This was added to the fact that they were already finicky in function. The unusual bulky dimensions of the helical magazines also required specially made pouches.

The layout of the Bizon used a newly designed receiver which was partially relieved at the bottom front and had altered and extended bolt guide rails to accommodate the helical magazine. The shortened dimensions cut out the standard side-folding locking mechanism known to the AKS-74 and its derivatives. The lock had to be redesigned to allow the stock to affix to the cross-trunnion barrel pin when folded. A sheet metal cover fit above the magazine, and the magazine itself served as the handguard. The standard AK triangle side-folding stock had a new securing plate riveted and spot welded to access the repositioned stock catch when folded. The gun also had a special trigger guard/magazine release with a flared housing for ease of magazine changes, a new shortened side optics mount and proprietary front trunnion and sight blocks. The 9mm barrel has a length of 8.9 inches and is threaded to a 14×1 left-hand thread for a cone style, bird cage type flash hider. The rear sight is a 50-100m leaf. The Bizon is said to be out of service while the Vityaz, with its more traditional submachine gun configuration, has been in widespread use with special units of all military branches and law enforcement agencies.

The Bizon’s younger brother, the Vityaz PP-19-01 was developed by Izhmash in 2004 and entered service in 2008. Since 2013, Concern Kalashnikov, Izhmash’s successor, has continued to manufacture it. The Vityaz was developed under supervision and by request from Sergei Lisuk, then commander of the famous ”Vityaz” tactical group—a special purpose unit of the Russian Interior Ministry. The correct literal Russian translation of the word “Vityaz” is a “Medieval heroic warrior-knight.”

The Vityaz is chambered in 9×19 NATO and uses the same blowback operation as the Bizon but with a traditional box magazine design, feeding from a 30rd polymer magazine with metal reinforced feed lips with stripper clip grooves. The magwell attaches to the standard AK trigger guard. The polymer magwell hooks into the receiver and is riveted to the mag release housing using a standard AK mag release rivet. The magazine housing also allows for a straight insertion, rather than a traditional AK rock and lock method. The submachine gun has a rate of fire of 700 to 750 rounds per minute and can fire a range of ammunition from standard 9×19 ball to the Russian armor piercing 7N21.

The receiver is an AK-74M parent receiver, reducing design time and total production costs from the earlier Bizon design. Without the need to accommodate the helical magazine, the receiver is shortened just in front of the magazine well. Like the Bizon, the shortened dimensions require the use of the same barrel pin set up to secure the folding stock.

The Vityaz uses a standard AK-100 series rear trunnion and a new dust cover hinged on the rear sight tower. The front trunnion is shortened as the blowback action of the gun does not require locking shoulders but rather relies on the mass of the bolt to delay the opening of the breech. Part of this mass is in the carrier stem, using the “gas tube” as a guide. The 9.5-inch barrel is threaded to 16×1 right-hand with a proprietary flash hider and a new front sight block using a standard front sight drum and post. The rear sights are graduated for either a 100m to 300m or a 50m to 200m leaf sight. The Vityaz uses a standard AK handguard retainer/hanger with the two internal keys milled off. The handguard, while visually similar to the AK-100 series, is a new design to accommodate the new front trunnion. The fire control group, however, are standard AK components and allow for safe, semi- and full-auto fire. The civilian market “Saiga-9” uses the same receiver as the Vityaz that’s taken off the military production line, complete with a three axis pins and a full-auto fire control group. However, Concern Kalashnikov makes the Saiga line of rifles semi-auto only by installing a semi-auto disconnector or sometimes a semi-auto safety in addition. The receiver markings are safe and semi-auto only. This is considered a legal modification for semi-auto-only restrictions in the Russian market. The Saiga-9 is also fitted with a 13.5-inch barrel due to the overall length requirements.

The second iteration of the Vityaz is the Vityaz-SN (SN-Special Forces), Version 20. It has the same layout as the original with the addition of an M1913 rail-hinged dust cover. The M1913 rail-hinged dust cover is on both the civilian Saiga-9 and the military Vityaz-SN. However, the Vityaz-SN still retains the side optics mount. This is to allow Russian operators to use side-mounted optics, with which they have a preference or prior tactical experience. The newest iteration is the Vityaz-MO, which is essentially the same weapon as the SN but with a suppressor. The Vityaz-MO was presented at the Army-2018 International Military-Technical Forum range day; although close investigation revealed that it was a Vityaz-SN with a Zenitco suppressor. The gasses ejecting out of the recoil spring’s assembly hole in the dust cover were enough to make the toughest shooters tear up. A recoil assembly gasket to reduce the gasses exiting the rear of the dust cover would be a major improvement.

Overall, the Vityaz is not a revolutionary design but honors its Kalashnikov lineage through practicality. For comparison, the Vityaz at 6.39 pounds is slightly heavier than the H&K MP5, which ranges from 4.4 to 6.8 pounds depending on the variant. The MP5 is an outstanding submachine gun, but the Vityaz outperforms it in simplicity of operation and construction. It is cheaper to manufacture and easier to maintain in the field and throughout its service life. This was accomplished by reducing the total system components and designing a simplistic blowback operation, when compared to the somewhat more complex roller-delayed blowback H&K system. Additionally, one notable advantage of the Vityaz over the MP5 is the ability to insert a loaded magazine with the bolt forward. On the MP5 this action is difficult and requires the bolt to be drawn rearward for both tactical reloads and when the magazine is empty.

While the Vityaz also does not have a bolt-hold-open mechanism, it still eliminates this extra step in the manual of arms and produces increased efficiency in reloading over the MP5.

Despite these advantages, the Vityaz/Saiga-9 design is far from perfect. The Russian factory-issued operators’ manual states that the submachine gun is not serviceable after 7000 rounds. After this relatively small round count, charging handles have broken off and receiver damage at times has rendered the weapon non-operational. One persistent issue with the current Vityaz is the bolt. The bolt channels engaging the bolt guide rails have excessive slop. This enables the bolt to bounce up when it hits the full-auto sear, and over time this specifically damages the right bolt guide rail. This oscillation is known to break the spot welds from the right side rail to the receiver. The fix from the factory was simple. They added a rivet in the hinged top cover to keep the bolt from bouncing up when the bolt was moving rearward or forward. The viability of this match is still being evaluated.

In summary, having shot a few Vityaz and not personally having witnessed or experienced any of the weapon’s design shortcomings I can see why the Vityaz is a favorable submachine gun option. The Vityaz is at its dawn, and the high volume of civilian, military and police orders suggest a long service life despite growing pains in its current form.