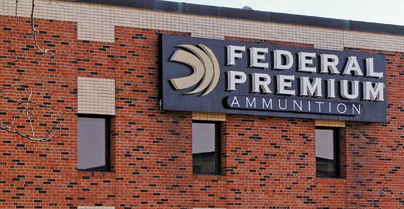 The Military & Law Enforcement Ammunition of Federal Premium and Speer Cartridges fully assembled coming off the line in the Anoka facility of Federal Cartridge Company.

Law enforcement and military ammunition has come a long way in the last 20 years.  Military ammunition, not so much due to the Hague and Geneva convention restrictions but advances in LE ammunition have made calibers known for being poor man stoppers into very effective and efficient man stoppers.  Federal has always been one of the top industry leaders in advanced ammunition development – perhaps the first true high performance hollow point with the introduction of the Hydra-Shok round that really saw its popularity peak in the mid to late 1980s.  The new HST round has currently in the opinion of many been found to be one of if not the best LE/personal defense projectile on the market.

The revolutionary design of the Hydra-Shok projectile added a post in the middle of the inside of the jacketed hollow point projectile.  Introduced to the market in 1985, the early Hydra Shok bullets were solid lead projectiles with the post in the middle of the hollow point.  Later the design was implemented into a jacketed round which is the current design.  What this post did was twofold.  First it increased the speed of the mushrooming affect by requiring less fluid to peel the projectile back.  Second it evenly spread the fluid to get a uniform mushroom affect.  So the bullet opened faster and more evenly than a conventional hollow point.  Federal offered this in all pistol and modern revolver calibers including Magnum and +P loads.  This was perhaps the first projectile to open the doors up for 9x19mm caliber pistols being seriously considered a viable law enforcement caliber due to its poor reputation as a “man-stopper” in its FMJ configuration on the battlefields over the last century.  The 230gr .45 Auto Hydra-Shok holds the highest record for “one shot stops” of any hollow point projectile.

The .45 Auto 230 grain HST projectiles penetrate approximately 12 inches in ordnance gel. As seen in the photo, expansion begins within the first 2 inches of penetration.

The load we will look at is the 9mm Luger 124gr Hydra-Shok +P+ round (P9HS3G1).  The round has a muzzle velocity of 1,170 feet per second and 377 foot pounds of energy.  In firing into bare calibrated ordnance gelatin, the projectile opened from .355 inches to .720 inches.  Although more that 25 years old, the Hydra-Shok remains one of the finest defense loads on the planet and rest assured it will remain on Federal’s product line for many years to come.

The new entry from Federal Premium in the defensive ammunition market is the HST.  The HST is by all means an improvement over any other hollow point in the Federal Premium arsenal.  In fact, many authorities in the industry claim it to be the new standard over the Hydra-Shok.  Adopted by many law enforcement agencies throughout the country, the HST has proven to have uniform expansion under all FBI protocol.  By design, the HST projectile will not plug up when passing through a variety of barriers. The projectile is also designed to retain its weight by the jacket not separating from the lead. The HST load was first released as a Law Enforcement load but as of 2013, Federal Premium released it to commercial customers as well. Shown is the MK318 Mod0 SOST round when fired into 10% Ordnance Gel at 25 yards. You can clearly see the balance of terminal and barrier blind performance. The front of the projectile comes apart to create tissue damage and the rear remains solid to penetrate deep into a variety of barriers.

The load we will look at next is the .45 Auto 230gr HST (P45HST2).  The round’s muzzle velocity is 895 feet per second with muzzle energy of 404 foot pounds fired out of a 5 inch barrel.  When fired into ballistic gel, the projectile penetrates 12 inches, which is ideal.  Ideal penetration is 12 to 14 inches.  In firing in bare ballistic gel the projectile has retained 100% of its weight. Federal Premium offers both a standard and +P version of this projectile.  Most high quality polymer pistols such as Glock and Heckler & Koch pistols will have no problem digesting significant amounts of +P ammunition while some other aluminum or steel frame pistols could severely limit the amount of high pressure rounds fired due to premature wear.  The HST technology is offered in 9mm Luger, .40 cal., .357 SIG, .45 GAP and .45 Auto calibers.  Multiple loads are available both standard and +P in 9mm and .45 Auto caliber.  The HST has not completely replaced the Hydra-Shok.  That projectile has a long and tested record but the new HST is making its way into law enforcement pistols throughout the country.

With the introduction of the patrol carbine, many police agencies are transitioning away from the standard 12 gauge shotgun in favor of AR-15-type patrol rifles.  This gives the officer the ability to handle many more situations with less chance of collateral damage.  When firing buckshot it is difficult if not impossible to account for each pellet fired and the chances of hitting an unintended target is increased.  With a rifle it is easier to account for a single shot and get that one shot precisely where it is needed.  Also, with the patrol rifle, the officer will be able to engage and defeat potential targets wearing body armor.  Other benefits of having a patrol carbine is regarding going through barriers such as dry wall and car doors is also possible and controllable. Federal Premium has also taken its place as a research and development company for the U.S. military and answering their requests for improved munitions.  One such case is in the development of the Mk318 Mod 0 SOST (Special Operations Science & Technology) cartridge.  This ammunition was requested by the U.S. Marine Corps for use in Afghanistan.  The round was first developed for the short 13.8 inch FN SCAR Light carbine.  The top half of the projectile is basically an Open Tip Match like the Blackhills Mk262 Mod 1 round but the bottom half is solid copper making the projectile a barrier blind projectile.  The 62 grain round as loaded has been optimized for ballistic performance and reduced muzzle flash from short barrels.  From a 14-inch barrel it achieves 2,925 fps.  In testing, the M855 ball shoots 3 to5 MOA and 300 yards with a 14.5-inch M4A1.  The Mk318 Mod0 with a 14 inch FN SCAR Light gives an average extreme spread of 1.71 MOA at 300 yards.  Compared to the M855, SOST rounds also stay on target longer in open air and have increased stopping power through “consistent, rapid fragmentation which shortens the time required to cause incapacitation of enemy combatants,” according to Navy Department documents.  The Marines have issued more than 2 million rounds of this ammunition and it can also be found on the civilian market. The time tested and battle proven Federal Hydra Shok cartridge and projectile. The post in the middle is the class characteristic of this popular defense projectile.

This is just a glimpse into the LE/Military ammunition capabilities of Federal Premium and Speer.  There are many different types of projectiles for different operational needs.  Everything in the lineup is tried and proven.  ATK has run Lake City Army Ammunition Plant since April of 2001. Whatever your needs whether it be target practice, hunting, self-defense, law enforcement or military, Federal Premium and Speer has what you need.