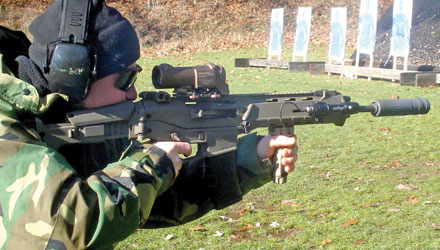 Bolt Carrier Group
The bolt carrier group is esthetically similar to that of the AR-18/AR-180.  A captive recoil spring is designed to stay in the carrier once removed to prevent loss from cleaning in the field.  No tools are required to perform routine field maintenance.  The bolt is the standard M16/AR-18/AR-180 eight lug profile.  The barrel extension on the barrel is the standard M16 barrel extension.  The firing pin has the addition of a return spring to prevent slam-fires from the inertia of the bolt closing on a commercial cartridge with a soft primer.  The charging handle is both ambidextrous and non-reciprocating.  To change the location of the charging handle, the rifle is broken open and the bolt carrier group removed and the charging handle is pulled out and inserted on the opposite side.  Currently, Magpul is working on charging handle location changes to enhance user friendliness. 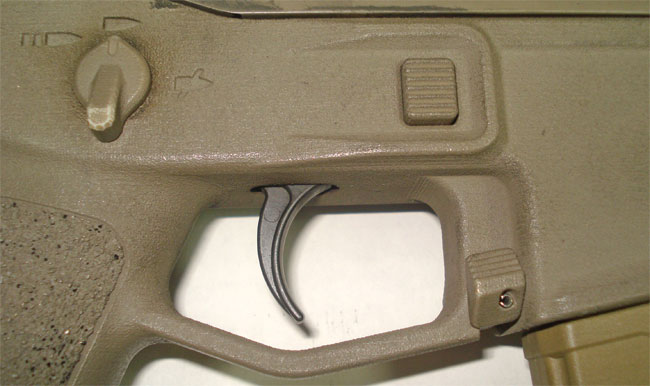 Lower Receiver
The lower receiver is made of injection molded polymer.  The bolt catch, magazine release and selector lever are fully ambidextrous.  The lower receiver accepts standard GI NATO M16 magazines. However, Magpul uses their advanced polymer PMags with the weapon system, which is a great improvement in reliability over the standard GI aluminum magazine.  The fire control group is a drop-in pack that contains standard M16 fire control components (hammer, trigger, disconnector) as well as the bolt catch.  The bolt catch lever is located in front of the bottom of the trigger guard.  Upon firing the last cartridge, the follower of the magazine elevates the bolt catch.  To release the bolt, the operator merely pushes downward on the bolt catch with his trigger finger to release it.  All of the receiver takedown pins are captured preventing them from being lost in the field.  The trigger guard is modeled after Magpul’s trademark enhanced trigger guard that allows the shooter to easily fire the weapon with heavy gloves.  The pistol grip is modeled after the medium Magpul MIAD pistol grip profile.  The removable cores will allow the operator to carry two N, CR123, AA or AAA batteries.  Another core will permit three additional 5.56mm cartridges and a bolt/firing pin.  Part of the modularity of the Masada is the ability to change calibers.  The lower receiver is a replaceable component.  Currently, a second lower receiver has been designed to allow the rifle to fire the 7.62x39mm cartridge. 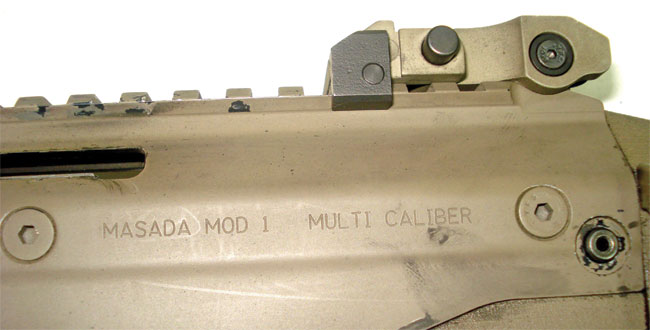 The markings on the Masada. Notice no caliber is specified. This is due to the modularity of the rifle that can be easily converted to many different calibers. The receiver is merely the host.

Stock Assemblies
Magpul has completed the design of two stock assemblies for the Masada.  The first is a Magpul folding stock design that takes the best design features from two other Magpul designs: the UBR (Utility Battle Rifle) and the PRS (Precision Rifle Sniper) stocks.  The UBR allows the stock to be extended without changing the cheek weld.  The stock has seven adjustable length-of-pull positions that amount to 3 inches of possible adjustment in length.  The stock is equipped with a rubber buttpad.  The stock can be fitted with a single point sling mount on the left side. The cheek-weld portion of the stock is stationary.  The Masada stock has the advanced features of the PRS stock as well that include an adjustable cheek-weld height.  The stock folds to the right of the weapon and does not interfere with the ejection of the fired cartridge cases.  In the front of the stock (when folded) is a water proof battery compartment that holds two AA or two CR123 batteries.

The second stock is the Precision Rifle (fine adjustment for sniper/target use).  This is a fixed stock with 1.3 inches of length-of-pull adjustment and 1.8 inches of cheek-weld height adjustment.  This stock has two different lengths of rubber butt pads and will accept a monopod.

Barrel and Operating Characteristics
The Masada uses standard AR-15/M16/M4 barrels, which have a modified front gas block and gas port.  Therefore, any AR-15/M16-type barrel can be modified to work on the Masada.  The standard handguard will permit any barrel length above 11.5 inches.  If the 10.5 inch barrel is required, a modified shorter handguard is available.  There are no tools required to change the barrels out.  The mechanism is an interrupted Acme-type thread in conjunction with a spring loaded detent to operate.  To change the barrel, the bottom handguard is removed, the spring loaded detent is depressed, rotate the lever to the right and the locking mechanism comes off and the barrel is pulled out of the receiver.  The piston op rod and associated assembly remains part of the barrel.  The gas piston system is Magpul’s very own design based on the AR-18/AR-180 Stoner design.  The front sight base has an adjustable gas regulator with three settings: “S” for suppressor, “R” for normal use and “H” for high altitude, extreme cold or fouled/impaired function conditions.

The weapon’s cycle of operation consists of the hammer striking the firing pin which detonates the primer in the cartridge igniting the propellant.  Expanding gasses drive the bullet down the bore and as the bullet passes the gas port, gas is bled into the expansion chamber creating a blow to the face of the operating rod driving it rearward.  The rear of the operating rod strikes the face of the bolt carrier driving it rearward unlocking the bolt, extracting and ejecting the fired cartridge case.  The operating rod spring, now compressed, returns the operating rod into the gas block, the recoil spring returns the bolt forward striping a cartridge off of the magazine.  The cartridge feeds into the chamber and the bolt locks into the barrel extension and the next cartridge is ready to fire.

Shooting Impressions
There are, as of this writing, only six Masada prototype rifles.  Two of them made their way to Rochester, New York for test and evaluation along with Magpul’s Drake Clark.  First examination of the two rifles showed an extreme amount of wear.  These rifles have been shot countless numbers of times.  Both were dirty and dry.  All shooting was done with Federal American Eagle and Remington UMC .223 Rem ammunition loaded in Magpul PMags.  Magpul claims the Masada has been tested with a wide variety of commercial and military production ammunition and their experience is the Masada is not sensitive to ammunition.  First shots were fired with the AAC 416 sound suppressor installed and the rifle functioned flawlessly with the sound suppressor on it.  The controls were easy to manipulate due to their similar locations to the M16.  The bolt catch took a little getting use to due to its location and how it was engaged.  Once used to it, the bolt catch was fast and easy to use.  The Masada was designed so reloading could be done while the rifle was still on the shooters shoulder.  Once the loaded magazine was inserted, the bolt was quickly released by taking the trigger finger and pushing downward on the bolt release.  For a 6.7 pound lightweight rifle, the Masada was easy to control and the cyclic rate was around 700 rounds per minute enhancing controllability on fully automatic fire.  Approximately 500 rounds were fired within 45 minutes through the two rifles that were dry with no lubricant and dirty.  All shooting was done at 25 yards in CQB type scenarios.  It was easy to get off 3 to 5-round bursts and that was center mass on a standard law enforcement silhouette target.  The adjustable stock was greatly appreciated.  Of the six shooters firing the Masada, we ranged from small stature, medium build to large frame/long arms and various thicknesses of jackets.  Everyone got comfortable with the Masada.  The overall length of the 14.5 inch Masada is 32.5 inches with the stock in the fully closed position.  With the stock fully extended the rifle is 35.5 inches in length.  With the stock folded, the Masada was only 26 inches in length. 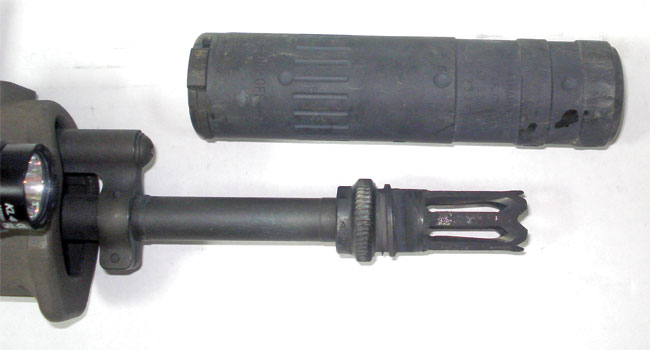 The Masada is probably the most advanced of any of the piston guns available on the market today.  Although not expected to be in production until mid-2008, the Masada has turned a lot of heads by keeping with the combat proven piston operation but going with next generation synthetic furniture.  The quick-change barrel will allow a modular firearm that will allow caliber changes quickly by only replacing the barrel and bolt with no need for an entire new upper half.  The Masada is geared for the commercial market, but you just never know what military unit may think when they get their hands on one.  Drake Clark was assuring that the production rifles will have several improvements over the prototypes and that even when the rifle is released for sale, it will not be considered a done project as Magpul plans to continue to evolve and improve their new weapon system.

(Editor’s note: Subsequent to this article being written, the following press release was received and says in part: “Bushmaster Firearms International, LLC (BFI) announced today that it has signed an exclusive license deal with Magpul Industries Corp. for the production, future development, and sales of Magpul’s prototype MASADA weapon system.  The Bushmaster ACR (Adaptive Combat Rifle) will initially be offered in 5.56 NATO, available for law enforcement and civilian purchase second quarter 2008.  This release will be followed by military ACR versions in the 3rd quarter of 2008.  The Bushmaster ACR will initially be available in 3 SKUS: Standard Carbine with fixed stock, Entry Carbine with folding stock, and Special Purpose Rifle with Precision Rifle Stock.”)

Tags: 2009, Christopher R. Bartocci, Masada, V1N1, Volume 1
← The 26th Annual War & Peace Show
The U.S. Ordnance MK43 Mod 1 Machine Gun →
Distributed at trade shows worldwide, Small Arms Defense Journal is a bimonthly publication that focuses on small arms, accessories, gear for the soldier, new products, industry news, and defense trade shows. The first issue of SADJ was Spring 2009, which launched at the LAAD show in Rio de Janeiro, Brazil. SADJ (pronounced “sage”) is targeted toward military, law enforcement, and defense industry professionals. Our job is to reach these groups and tailor content to their interests while producing a publication that is applicable to an international audience.