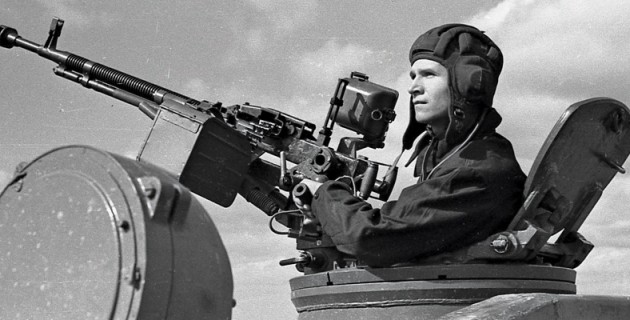 This story begins in 1925.  That year the Red Army requested the development of a large caliber machine gun with the intention of using it as an anti-aircraft and anti-armor weapon.  Initial research suggested a caliber of 12.7mm (0.5 inch, or “five lines” in contemporary Russian measuring system, where “one line” was equivalent of 1/10 of an inch), with the earliest work being based on the British .50 Vickers cartridge.  However, it was soon discovered that the British round was not effective enough, so an indigenous round of same caliber but more power was quickly developed.  Unlike the standard Russian 7.62mm rifle round, the new 12.7×108 round had a rimless case and was generally similar to the American .50 caliber Browning machine gun round, although the Soviet round had a somewhat longer case.  Early tests were conducted with prototype machine guns, built to the Rheinmetall “Dreyse” design of the WW1 period and known as P-5 (five-line machine gun by Pastukhov).  These proved unsatisfactory, and by 1930 Degtyarov developed what was basically an enlarged DP-27 machine gun, known as the DK (Degtyarov Krupnokalibernyj – Degtyarov large caliber).  This was a large, gas operated, air cooled weapon that used a top-mounted magazine feed, with 30-round detachable drum magazines.  DK machine guns were put into limited production by 1933, and used on certain armored cars, light tanks, and smaller naval and riverine vessels.

However, the heavy 30-round drum proved to be unsatisfactory in service, and by 1938 the gun designer Shpagin developed an ‘add-on’ belt feed unit for the DK.  The modified DK with belt feed passed the usual trials and was subsequently adopted as DShK-38 (Degtyarov – Shpagin Krupnokalibernyj – Degtyarov and Shpagin large caliber, model of 1938).  While the DShK was a satisfactory weapon with reasonable power (at least to deal with low-flying aircraft and lightly armored vehicles), it had some peculiar properties, of which the most notable was the very heavy universal wheeled mount, which, despite its weight, could not provide the necessary gun stability and vibration dampening for accurate long range fire.  Overall, the DShK was a decent weapon, but it was built in relatively small numbers – by 1945 the USSR had only about 40,000 HMG’s in land and naval service (including U.S. made Browning M2HB supplied through the lend-lease program), mostly in Army AA units and on smaller naval crafts.  However, like the SG-43 it also was upgraded during the immediate post-war period, and also experienced a long service life, especially in so-called ‘Soviet satellite’ countries, as well as in many other Asian and African countries.

During the late 1930s, Soviet army experts developed a very powerful round for anti-tank rifles.  Known as 14.5×114, this round provided significant penetration and flat trajectory, and as soon as first anti-tank rifles entered the service, the Army requested development of a machine gun firing this potent round.  The first machine gun firing 14.5mm ammunition was developed in 1941 at the Red Army Small Arms Proving Ground near Moscow.  Designed by Simonin, it was a gas-operated weapon fed by Hotchkiss-type rigid strips with 10-round capacity.  Ten specimen of this gun were produced early in 1942, with five tested on T-60 light tanks and five more – on Kolesnikov mounts originally produced for DShK HMG.  The Simonin machine gun proved to be a formidable weapon, but was far too expensive for mass production.  It set the base for official requirements, issued by Army, and at least three design teams entered the race to produce an effective 14.5mm machine gun.

The eventual winner of the contest was designer Vladimirov, who quickly developed a belt-fed, air-cooled 14.5mm machine gun using the short-recoil action of his own experimental 20mm aircraft cannon V-20.  Development of the new HMG commenced in 1942, and the first working prototypes of the KPV were built by 1944.  They were initially tested on DShK wheeled mounts.  It must be noted that this design had some opponents in the Red Army ranks, who believed that a recoil-operated firearm would be less reliable than a gas-operated one.  Despite that, the KPV won the trials and after much refinement work it was adopted in 1949 in an infantry version (on a wheeled mount) and in three towed AA mountings (single, twin and quad).  Later on, its ‘tank’ version was used as the primary armament of some armored reconnaissance and personnel carrier vehicles such as BRDM, BTR-60D, BTR-70 and BTR-80.  In the AA role, KPV guns saw considerable action in the hands of the North Vietnamese armed forces, supplied from the USSR and China as military aid.  Later on, AA mounts with KPVT guns were used by the Soviet Army in Afghanistan, to fire up at Mujahidin hiding in the mountains and firing at Soviet bases and convoys from above. Quest for Squall Firepower
It is a well-known fact that Soviet designers routinely tried to produce various super-fast-firing machine guns (and later automatic cannons) since the late 1930s.  The prime use for such guns was to arm airplanes, although anti-aircraft tasks were also proposed for such weapons.  After much experimenting with single-barreled weapons and mechanically coupled ShKAS guns, another solution was tried.  Around 1936, designer Slostin developed a prototype rotary machine gun in 7.62x54R.  This weapon had a rotary cluster of 8 barrels a-la Gatling, but unlike most such systems it was self-powered, using gas pistons attached to each barrel.  Development of this “squall-firing gun” (in contemporary Russian terminology) with rates of fire reaching 6-8 thousands of rounds per minute, continued up until 1944 or 1945.  In 1944 the same designer started development of a much more formidable weapon, a 6-barreled self-powered (gas-operated) Gatling-type gun chambered for the powerful 14.5x114mm API and API-T ammunition.  This monstrous weapon was intended to serve as remotely-operated AA weapon for the super-heavy IS-7 tank then in development. At least one prototype machine gun was built, but tank designers choose the slower-firing but significantly lighter and probably more reliable KPVT instead.

In fact, the prototype IS-7 tank (as made in 1947) was one of the most heavily armed tracked vehicles of its time – in addition to its rifled 130mm main gun it carried two 14.5mm KPVT machine guns (one on a remotely-controlled AA mount and one co-axial with the main gun) and six 7.62mm SGMT machine guns.  Development of the Slostin multi-barrel machine guns was terminated shortly after WW2, but the general idea lived on.  During the 1970s, Soviet designers Yakushev and Borzov developed a 4-barreled self-powered (gas operated) rotary machine gun, known as YakB-12.7.  It was and still is widely deployed as a primary armament of the Mil Mi-24 “Hind” attack helicopter.  To ensure increased effectiveness of this weapon against massed unprotected infantry (typical for Chinese army of 1960s and 1970s), Soviet Air force adopted special duplex loading for YakB-12.7 along with more common ball, API and API-T rounds in 12.7×108.

Post-WW2 Developments
The venerable 12.7mm DShKM served well into the 1960s, but it was far too heavy for mobile warfare, and proved to be insufficiently accurate over longer ranges.  Therefore, a new requirement was drawn up for an improved 12.7mm HMG, which could be used as an infantry support weapon (on a tripod), as a tank defensive weapon (cupola-mounted) or as a short-range AA weapon (on dedicated mounts).  Development of a new weapon was initiated in 1969, and in 1972 the Soviet Army adopted the design by Nikitin, Sokolov and Volkov.  Known as the NSV-12.7, this weapon is also known as “Utjos” (Cliff; the original codename of the development program).  This weapon was significantly lighter than the DShKM especially in its infantry support configuration.  On a tripod and with 50 rounds in a belt the NSV weighed some 100 kg / 220 lbs. less than the DShKM on its wheeled mount with the same amount of ammunition.  It was also more accurate and better suited for contemporary production techniques.  The NSV quickly replaced the DShKM on Soviet tanks, as well as with infantry units as a heavy support weapon and in certain non-infantry units as a short-range AA weapon (on dedicated low-profile AA mounts).  It saw considerable action in Afghanistan, and later in Chechnya, being used at stationary posts and, sometimes, mounted on the MT-LB tracked armored vehicles and army trucks to provide convoys and small mobile units with additional firepower.

The last decade of the 20th century was rather turbulent.  The fall of the Soviet Union left some military factories located outside Russia; worse still, some of these factories were the primary makers of certain weapon types, such as the 12.7mm NSV and NSVT HMGs.  The Metallist factory that made these guns for the Soviet army remained in the now-independent Kazakhstan, and it kept all master drawings and other manufacturing documentation for this important weapon.  It was therefore decided to take the opportunity to develop an improved HMG for use both by infantry and on vehicles (mostly tanks), and this task was handed over to the designers of the Degtyarov plant (ZID, the former Degtyarov machine gun factory) in the city of Kovrov.

The new 12.7mm weapon was to retain the same mounting interfaces as the NSV, while providing better long-range accuracy.  The ZID team did not have to start from the ground up – actually, the factory’s design team had been working on an improved 12.7mm HMG since 1987 – but the fall of the USSR delayed its development.  The new Russian Army requirement allowed them to shake the dust from their older design drawings, and while development was rather slow (because of the constant lack of funding), the finalized gun was adopted by the Russian Army in 1997 and put into mass production in 2001.  Known as KORD (Konstruktsija ORuzheinikov-Degtyarovtsev – design of Degtyarov plant team), or under the official index 6P50, this weapon is now issued to infantry troops and is mounted on most modern Russian tanks, such as the T-80U and T-90, as well as on jeeps and on ground mounts.  Because it uses the same firing and mounting interface, KORD can be also retrofitted to older tanks (i.e. T-64 and T-72), to replace worn-out NSVT-12.7 weapons.  One unusual feature of the KORD is its relatively low recoil, which allows it to be used not only from the same lightweight tripod as the NSV, but also from a proprietary bipod mount, creating what could be called a lightweight heavy MG.  In this configuration the KORD weighs ‘only’ 31kg / 68 lbs. less ammunition, thus allowing it to be carried on the battlefield by a single soldier, although obviously for short distances only.  This makes the KORD useful during ‘limited warfare’ operations in urban and forest environments, as the HMG team can change positions almost as fast as the infantry it supports, and is able to fire from almost anywhere, including the high stories of urban buildings (through the windows) or even from the rooftops.