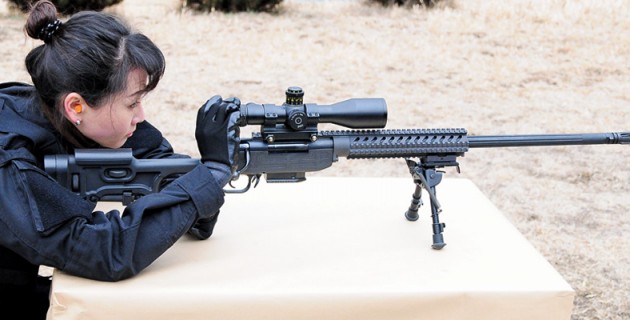 In December of 2012, the Korean company S&T Motive received a contract with South Korean DAPA (Defense Acquisition and Purchase Agency; an agency who performs all government defense purchasing) to supply 3.2 billion won (close to 3 million USD) worth of K14 sniper rifles with all optics and accessories, including training ammunition.  These are for the Korean Army for delivery during 2013.  This is the first time the ROK (Republic of Korea) Army has purchased a large number of sniper rifles, and the K14 is the first indigenously designed and manufactured sniper rifle in Korea.

Until the late 1970s, the Korean army maintained a small amount of the M1 Garand sniper variants M1C and M1D, usually with an early generation night vision sight with IR light attached.  There’s no evidence that the ROK Army had serious thoughts about sniping and sniper rifles; “Sniper” had never achieved a permanent MOS in the Korean army.  No systematic sniper training had been offered, and “sniper” usually meant “good marksman,” not a specialized marksman with specialized equipment, training and mission: just a soldier who just shot very well.  Simply speaking, nobody thought seriously about sniping/snipers as part of a special job.  After the M1 rifles became obsolete, their sniper variants were also obsolete and disappeared from inventory.

Left side view of the K14. The Schmidt & Bender scope installed here is not the one issued by the ROK Army, just one attached by S&T Motive.

In the late 1980s, a small number of optical sights, which were basically a copy of the British SUIT (which is just called Trilux in the Korean army), were issued and mounted on then-new K2 rifles; the rifles with the SUIT copy were issued to frontline troops stationed around the DMZ.  There were not many issued, and they were used similar to today’s DMR concept, but this was also not official in the system.  Actually, during this author’s years of Korean military small arms research, there have only been a few occasions that the sight was seen actually mounted on a rifle.  It was the closest thing to a sniper that the regular ROK Army had, and the ROK Army really had no interest in designated sniper rifles.

This was interesting, because the ROK Army has experienced considerable sniper threats during two wars; North Korean and Chinese Communist snipers harassed ROK positions during the 1951-1953 era and North Vietnamese snipers also caused considerable damage to ROK troops during the American-Vietnam War.  Yet with all those experiences, the ROK Army didn’t have much interest in sniping.  This doesn’t make much sense, considering what they face across the DMZ every day.

Of course, some Korean military organizations purchased small amounts of sniper rifles during the last three decades; but virtually all of them were for Special Forces such as ROK Army and Marines Force Recon. Until recently the Korean military mindset was that sniping is only a Special Forces’ job, especially the counter-terror units. That is a small percentage of the forces.

That mindset began to change during the mid-2000s.  Many officers in the Korean Army – mainly young ones – were now interested in sniping, and their experiences in Iraq and Afghanistan (a few thousand ROK troops fought in both places) gave good insight to the value of sniping.  The ROK has realized that the North Koreans also maintain a considerable sniper force.  Similar to Russians, North Korea produced large amount of semi-auto sniper rifles and spread the snipers usually to the platoon level, and in some cases even to squad levels.  Facing that high a concentration of trained snipers with special equipment, the ROK Army has realized from its recent combat experiences that it needs to evolve the sniper role.

By 2011, specific requirements for a new sniper rifle were completed; around 800-1,000 rifles were supposed to be purchased, and the rifle would be bolt action, 7.62x51mm, with appropriate optics and accessories.  Originally, it was open to foreign direct purchase, but at that point S&T Daewoo (now S&T Motive) entered into the competition with their own design, the XK14 rifle.  Since Korean law gives priority to indigenous manufacturers for defense procurement, the XK14 became a prime candidate for the new sniper rifle program, and underwent tests for certification.  It passed all the tests that the army gave, and during December 2012 it became the new sniper rifle for the ROK Army general issue and was officially designated as the K14 rifle. The magazine can easily be removed using the large paddle-type magazine catch, even with gloved hands.

Description
The K14 is a bolt action rifle with turn-bolt action, in 7.62x51mm NATO caliber.  It is a very typical bolt action with not too many special or exotic features.  Since Korea has virtually no experience in this field, it’s natural that they were not trying to venture into something totally new and unproven.

One interesting thing is that this rifle is roughly based upon the Winchester Model 70 rifle, while many other recent bolt action rifles follow examples of more modern designs, such as the Remington M700 action or Accuracy International’s AW series.  We can’t be sure what the reason was for this choice, and S&T Motive has not discussed this.

The K14 has some ‘modern’ features in its action, of course.  For example, its bolt opens at 60 degrees to allow faster repeating shots, and the manual safety moves 90 degrees for on/off, while the original M70 moves 180 degrees.

The stock is made with fiberglass-reinforced polymer and it has a thumbhole pistol grip and fully adjustable cheek pad/butt plate with height adjustable monopod.  It has an internal metallic frame, and the barreled action is bedded on that frame.  This frame is also being used as a platform to support a 4-way rail handguard, which is used for accommodating optics or other needed accessories.

The K14 has little muzzle flash, and the recoil is not too strong considering its relative compactness.

The magazine is a detachable box type, with 5-round capacity as the basic and 10-rounds optional.  This is detached via a paddle type magazine catch, which is quite large and easy to operate, even with a gloved hand.

The barrel is fluted, with a length of approximately 610mm.  There is a four-prong type flash hider, and while the ROK Army hasn’t required a sound suppressor yet, one can be mounted after removing the flash hider.

Overall length is 1.15 meters, and with the empty weight of 5.5kg (w/o scope), this gun is relatively light and small compared to its barrel length.  As can be seen, the engineers at S&T Motive worked to reduce the size of the weapon, and their effort seems to have paid off. The safety is also similar to the Model 70, but only moves 90 degrees to ensure fast operation.

A few scopes are considered as the basic optics for use. The Schmidt & Bender PMII is one, and the Leupold Mk4 is another. A Korean made optic is also considered, but the ROK Army is hoping to buy better quality foreign ones. They understand the optic is at least as important as the rifle itself.

From Our Test
The K14 is a somewhat simple and typical bolt action rifle, which is relatively easy to operate and maintain.  If you’re familiar with the Model 700 or the Model 70, then you can operate it without much additional training.

What this writer examined and fired was a prototype, and it still had some things to be fixed; cycling was not that smooth, and trigger was also not that good.  The production models will be smoothed out.  We fired the weapon at S&T Motive’s range during a visit in March, 2012 and this article is written during February, 2013 when we’re allowed to discuss this rifle.  Smoothing out trigger and bolt are in the final production. The K14 uses a detachable box magazine. This is a 5-round mag, but there is also a 10-round magazine available.

Compactness is a very positive aspect of this rifle.  Compared to the original M70 or Remington M700 series of rifles it is relatively compact and easy to handle.  Lack of a folding stock can be a drawback, but it probably would not become a serious fault.  With a length of 1.15m, the K14 won’t be hard to carry in the field, even in the mountainous terrain that is typical in Korea.  While light and compact, this rifle’s recoil is not that pronounced, probably due to the stock design, which is quite close to the barrel axis, and the muzzle brake/flash hider.

In terms of accuracy, the ROK Army’s minimum requirements were less than 1 MOA at 100 meters and a minimum 800 meters of effective range.  Since S&T Motive had little experience with sniper rifles, they had a learning curve to achieve those goals; and finally succeeding in doing so.

Overall, the K14 is not the greatest sniper rifle, but it’s definitely not a bad one.  It will probably be a very good tool for the new snipers of the ROK Army.  It has enough accuracy to counter the North Korean snipers armed with their semi-auto sniper rifles, which are roughly based upon Romanian PSL and Serbian M76 rifles.

The K14 is sold as a package to the ROK Army; it includes the rifle, a quality daytime scope, clip on in-line night vision sight, training ammunition, ghillie suit and other necessary accessories for sniper training and missions.  The price per system is approximately $13,000 USD equivalent.  Exact price of the rifle is unknown, but should be significantly less than the whole package.  Right now this rifle is being offered to the Jordanian army, and S&T Motive says small amounts were already sold to some foreign buyers.