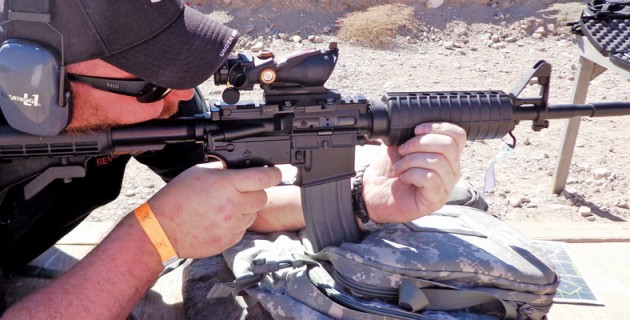 ABOVE: The author testing the CQ-A for accuracy at the Pro Gun Club Range in Las Vegas, Nevada area (Boulder City). Notice the Trijicon ACOG 4×20 scope.

They say that imitation is the most sincere form of flattery. If that is the case, Norinco of China is the Mecca of flattery. Aside from their original designs, Norinco of China has copied many firearms and sold them including the M1911, Remington shotgun, SIG P226 pistol, M14 and also the M16. In the early 1980s, Norinco introduced the CQ M311-1. This was a semiautomatic only version of the M16A1 intended for commercial sales.

This rifle was definitely different and unique in several ways. You would notice immediately the unique shape of the stock, pistol grip and round handguards. Chambered in 5.56mm/.223 Rem., the rifle had a forward assist, standard small hole pivot pin, 1/12 twist barrel for the M193 ammunition and standard A1 sights. The Chinese are not known for making aesthetically pleasing firearms. They are known for making reliable firearms and that is where the focus is. The rifle appears to have a painted-on finish. The receivers are manufactured of 6064 T6 aluminum but not from forgings. They use a metal injected molding (MIM) process. The outward appearance was not the quality of an LMT or Colt rifle; then again the rifle is half the cost. The rifle was also produced in .222 Remington caliber for export to countries that cannot have military caliber rifles such as Italy. These semiautomatic rifles are still for sale in the markets of Canada, South Africa and Europe. As far as the United States is concerned, the Norinco CQ is quite rare. Due to the importation ban of military products from China by President Bush, less than 500 CQ rifles ever entered the U.S. Right and left side of the Norinco CQ-A; a copy of the U.S. M4A1 carbine. Slight differences can be noted but for most you have to look really close.

Rifles were also built for military and law enforcement sales; these were known as the CQ-311/CQM-311. This is basically a Chinese copy of the M16A1 selective fire rifle with the unique stock, pistol grip and round handguards. Sales were made to the Cambodian Royal Army, Thailand Royal Navy and Costal Defense Command, Libyan Army and Syria. Paraguay manufactures a copy of the CQ-311 for military use

The CQ-A
Released in 2006 was the CQ-A; a Chinese copy of the M4A1 carbine. In looking at this rifle, it holds true that it was not designed to be a pretty gun but to be a functional military rifle – which it is. The upper receiver has an early “Tear Drop” style forward assist with a flat top Mil-Std 1913 rail upper receiver. The barrel is 14.5 inches with a 1/9 inch twist. The barrel has a painted-on black finish. The barrel has a rifle barrel extension (no extended feed ramps) as well as a rifle upper receiver without extended feed ramps. The ejection port is the early AR-15 style. The front sight base is pinned in place and has a bayonet lug with a sling swivel riveted into the front sight base. The A1-style birdcage flash suppressor is held on with the early spring washer. The rifle uses a 5 position round A1-style front sight post. The handguards are the same shape as the M4 double heat shield handguards. However, there is only a single heat shield on the bottom handguard on the CQ-A. The rifle comes with a detachable carrying handle. This is also a MIM part. The locking nut screw is not peened so the locking nuts will come off. The detachable carrying handle and the receiver are both serialized; in this case they both say 009. The rails on the top of the receiver are not numbered. There is no consistency in the numbers that appear on the rifle. The serial number, numbers on the upper and carrying handle, bolt carrier, upper under forward assist and lower near the trigger are all different. The only two that coincide are the upper and removable carrying handle.

The markings on the left receiver are the Norinco mark with the model number 311-3 indicating it is chambered in .222 Remington caliber. This is a commercial semiautomatic only rifle. The right is the selective fire CQ-A rifle, which is a copy of the M4A1 carbine.

The bolt carrier looks fairly standard. There is a large crater around the firing pin retainer pin on the right side to allow the pin to be pushed out with a small finger. The machining is fairly crude but this is only cosmetics we are talking about. The carrier key is staked in place. Unlike the norm, which use round wedges to stake, the CQ-A uses square wedges to stake the carrier key. Both the bolt and the carrier have the British BNP proof mark on them. There is no extractor spring buffer. The receiver extension plate is ambidextrous for mounting a sling or a one point sling. Notice how it obstructs the use of the forward assist. You can also see the ambidextrous selector lever.

The rifle and 400 rounds of M855 ball ammunition were taken to the Pro Gun Club Range in Nevada. The magazines used were standard GI aluminum, Magpul Gen 3 PMag and the Hera Arms polymer magazine. The first couple attempts to fire were unsuccessful. Examining the primer on the cartridges showed light strikes. Inspection revealed the hammer spring was damaged, not able to give enough energy to set off the round. The hammer spring was replaced with a US made spring, and the rifle then fired 400 rounds of mixed semi and automatic fire with no malfunctions of any sort. For accuracy testing, a Trijicon ACOG 4×20 scope was added and the target placed at 50 yards. The group was within 2 inches. Perhaps with better ammunition this could have tightened up. At the time of testing, only M855 ball was available. The Chinese reverse engineered the M4 carbine and made a rifle that functions flawlessly.

The CQ-A has seen military and law enforcement service. In fact, the legendary Chinese Snow Leopard Commandos have been seen using it. The Snow Leopards are a special police unit officially known as 3rd Group, 13th Detachment, People’s Armed Police, Beijing General Corps. They are trained to respond to counter terrorism, riots, bombs and highjacking. There was a video shown in China on the Snow Leopards that showed them armed with CQ-A rifles. This rifle has also seen service with the Paraguayan Special Forces.

The CQ-A is a military grade weapon that functions well. In the U.S., gun owners are very much interested in the high quality perfect finish rifles. The Chinese concern themselves with combat reliable guns with appearance being of little concern. Semiautomatic rifles of the CQ-A are available all over the world. They are cost effective and people can afford them. In Canada they are looked upon as starter rifles. Foreign militaries can afford to equip their troops and police with a low cost rifle that functions the same as the higher cost rifles.