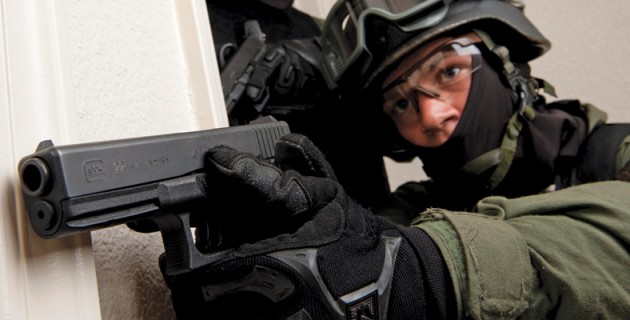 Debuting in 1982, Glock has revolutionized the foundation on which military and law enforcement handguns sit.  Glock pistols not only revolutionized the material in which military grade pistols are manufactured but the sheer market share they hold is nothing short of amazing.  Entering the market as a polymer frame firearm with the fewest parts of any firearm of its kind with utter reliability and dependability, Glock converted the most diehard steel and aluminium frame pistol shooters into devout disciples of polymer.  In the early days the pistol was very disrespectfully referred to as “Tactical Tupperware” due to the type of box in came in as well as the occasional joke of the gun coming with a tube of epoxy for repairs would soon lead all detractors into the world of Glock.

Generation 1
The first generation Glock 17 pistols had a smooth polymer grip.  They had a 2-piece spring guide and recoil spring.  The magazine was designed so it would not drop free when the magazine release was pressed.  Although this proved to be problematic for American users, the Austrian Army required it.  Rumour had it that it was so the magazines could not be lost in the snow.  To be able to import the gun into the United States a few modifications had to be made.  In Europe the serial number had to be on the slide and barrel.  In the U.S. it is required on the frame, so Glock moulded a tab into the frame.  Also to meet the points for importation, Glock added an adjustable sight.  The first generation was in fact the Austrian Army model P-80 although it would be sold else where as the Glock 17 (Gaston Glock’s 17th patent).

The Glock 17 pistol is striker fired omitting any external hammer.  The striker has a partial load on it when the pistol is ready to fire.  Approximately 25% of the load is taken up.  When the trigger is pulled, the remaining 75% of the striker is taken up and released to fire the cartridge.  Mr. Glock called his pistol “Safe Action.”  No external safeties are used.  However, the pistol has 3 internal safeties.  To gain a realistic perspective, you must understand that military and law enforcement personnel carried revolvers with no manual safety for many years.  This was never deemed unsafe.  However, with double action semiautomatic pistols, it is common for firearms instructors to find it difficult to train inexperienced people.  Reason being the first heavy pull of the trigger is often a flyer due to the extreme amount of force required to depress the trigger.  The follow-up single action shot is often also a flyer due to anticipation of the heavier trigger pull, even though the pistol is now firing in the lighter single action mode.  The Glock pistols have one constant trigger pull from first to last shot. Removing the element of anticipation, the shooter has enhanced accuracy and more accurate first shot hits. Gaston Glock’s first pistol and the one that started it all, the Glock 17 which became the Austrian Army’s P-80 pistol. This pistol would forever alter the materials military and police handguns would be made and take the entire market by storm.

The slide is manufactured from a bar of solid steel and is finished by a process called gas nitration.  This clear finish penetrates .05 inches into the metal.  The slide of a Glock pistol is so hard it is just under a diamond on the Rockwell scale (55 to 60).  This finish is so hard that Austrian soldiers sharpen their bayonets on the slide. This finish is corrosive resistant as well.

The barrel of the Glock 17 is cold hammer forged.  After a pilot hole is drilled through the center of the barrel a mandrel, which contains the rifling and chamber, is placed inside the barrel blank.  Multiple hammers exert tons of force on the outside of the barrel, forming the polygonal bore and chamber.  Unlike conventional barrels with cut rifling, there are no sharp lands and grooves.  The bore diameter is tighter than a conventional barrel as well.  This does two things.  First, due to no sharp lands and grooves the barrel does not wear much at all increasing long term accuracy/barrel life and making the barrel easy to clean.  Second is a tighter bullet to barrel seal increasing velocity. The Generation 2 Glock 17 shows many changes to the frame of the pistol including the checkering on the front and backstrap of the pistol. Some changes would be made to the trigger group as well. This pistol would also be made available with the new drop free magazines.

Generation 2
The second generation Glock was made for the desires of the American consumer.  First, the grip was changed to add checkering to the front and back strap of the pistol.  Additionally slightly rougher sides were added as well.  Internally, the recoil spring and spring guide were changed to a captive assembly.  Later second generations received an upgrade on the trigger group and firing pin block for improved safety.  Glock provided this for free based on the serial number range of the pistol.  The pistol was offered with fixed sights, adjustable as well as tritium night sights.  Perhaps the most significant change was for the American consumer with the drop free magazine.  The internal metal body went around all sides of the magazine preventing the magazines from swelling whether empty or full.  With the introduction of other calibers, an additional pin was added to secure in the locking block on all non 9×19 caliber pistols.  During this generation calibres in .40, 10mm Auto, .45 Auto, .357 and .380 Auto were introduced.