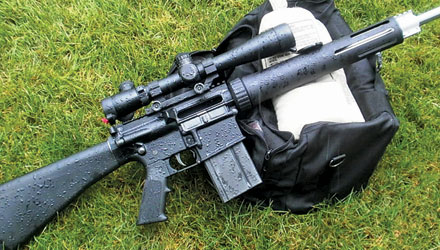 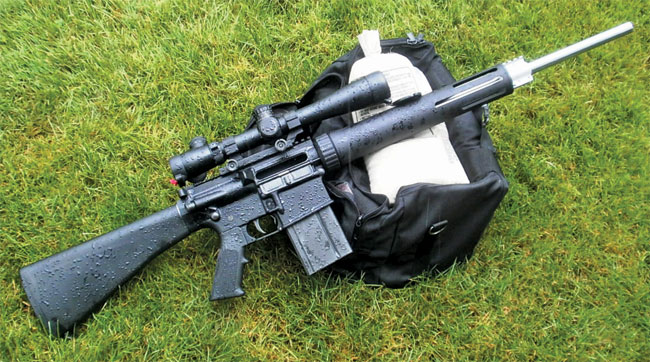 The AR-10T chambered in .338 Federal. The rifle was tested on a rainy July day.

The reintroduction of the AR-10/SR-25 in the early 1990s re-revolutionized the use of semiautomatic rifles as sniper/tactical rifles.  The direct gas system combined with the eight-lug rotating bolt and a free floating barrel made this system sub-MOA with little difficulty or maintenance.  Although the AR-10 was discarded nearly 50 years ago by a biased and self serving U.S. Ordnance Corps in the late 50s, the rifle has come back with a vengeance even though it came out of private industry rather than a government arsenal.  The rest is history.  The AR-10 weapon family has become extremely popular and, like its 5.56mm little brother, proven to be just as versatile.

The AR-10 comes in both rifle and carbine forms.  Telescopic, fixed as well as precision stocks are available.  Rails systems as well as free floating tubes are available as well as conventional handguards.  Like the 5.56mm weapon, the AR-10 is equipped with Mil-Std 1913 rails and therefore compatible with all the accessories from optics to flashlights.  The rifles are offered in fixed as well as flat top upper receiver variations. 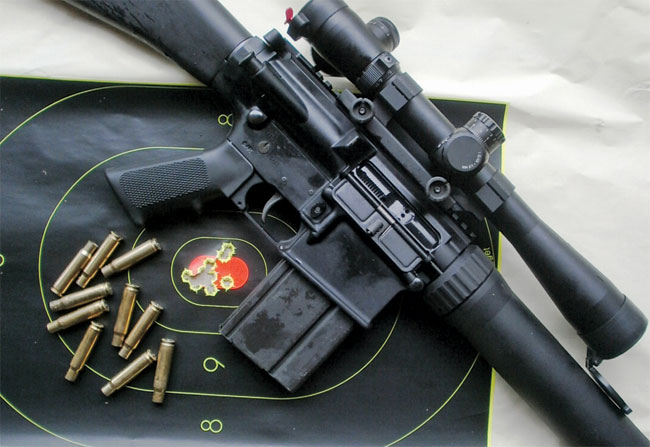 At 100 yards, the AR-10T .338 Federal shot consistent sub-MOA groups. This 10 shot group measured approximately .750 inches. There were two flyers due to too much coffee before shooting.

ArmaLite was the first manufacturer of auto-loading weapons to chamber up for this cartridge.  Taking their proven AR-10T rifle and modifying the bore and chamber, the rifle is chambered for the .338 Federal.  Due to the characteristics of the .338 Federal cartridge, nothing else was modified other than the bore and chamber. The rifle that was shipped for test and evaluation was equipped with a 22-inch triple lapped AISI 416R stainless steel barrel RH 1:10 inch twist, which will stabilize .338 caliber projectiles from 185 to 210 grain projectiles.  The front sight base has a Mil-Std 1913 rail on top to enable the placement of a folding front sight.  The free floating handguard is manufactured from aluminum and is manufactured by ArmaLite.  The upper receiver is manufactured from a solid 7175 T74 aluminum forging.  The rifle is also equipped with the newly introduced receiver with a forward bolt assist.  Of course the bolt carrier has ratchet notches machined into the right side of the carrier to function with the forward assist. To accommodate left handed shooters a fired cartridge case deflector has been added to the upper receiver. The upper receiver is a flat top upper receiver with a Mil-Std 1913 rail for mounting optics.

Monroe County Sheriff Deputy Stephen Warden test firing the AR-10T. More recoil is noticed compared to the .308 Win counterpart, though not much. Credit should be given to the inline construction of the Stoner designed direct gas operating system.

The lower receiver is manufactured from a solid 7175 T73 aluminum forging.  The trigger used is ArmaLite’s National Match 2-stage trigger (first stage 2.5 pounds and the second stage is 4.5 pounds).  This trigger proved to be excellent allowing precision trigger control.  A standard M16A2-length stock was provided.  The magazines are based on the M14 magazine and may take M14 magazines and convert them into AR-10 magazines.  ArmaLite has manufactured their own magazines offering several enhancements over the M14 converted magazines.  The ArmaLite manufactured magazines are offered in 5, 10, 20 and 25 round capacities.

The rifle was provided with a Leupold Mark 4 3.5 to 10x scope with an illuminated reticle.  This scope has a 40mm objective and is equipped with bullet drop compensator for the 7.62x51mm round with a 168gr projectile.  The illuminated reticle is turned on or off by the user and has 11 increments of brightness.  The scope was mounted in an ArmaLite 30mm scope mount.  The ammunition tested was the Federal Fusion .338 Federal 200gr projectile.  Due to cost of the ammunition, 100 rounds were fired in this evaluation.  There were no malfunctions during firing.  Recoil was noticeably more than the standard 7.62x51mm cartridge.  The groups printed consistently between 3/4 to 1 MOA.  Though the day of the test was rainy and drizzly, the accuracy is certainly acceptable for any tactical application or hunting application required of it.  There are distinct improvements and justifications to shoot the .338 Federal over the standard .308 Win however, due to the cost, the .338 Federal may never see its full market potential.  The .338 Federal is strong enough for any North American game and that may be its niche.  We will just have to wait and see.