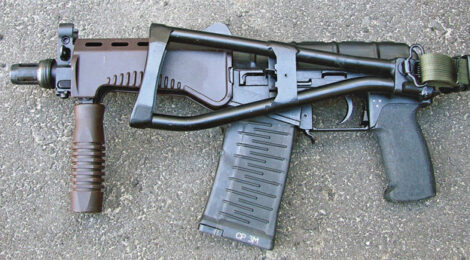 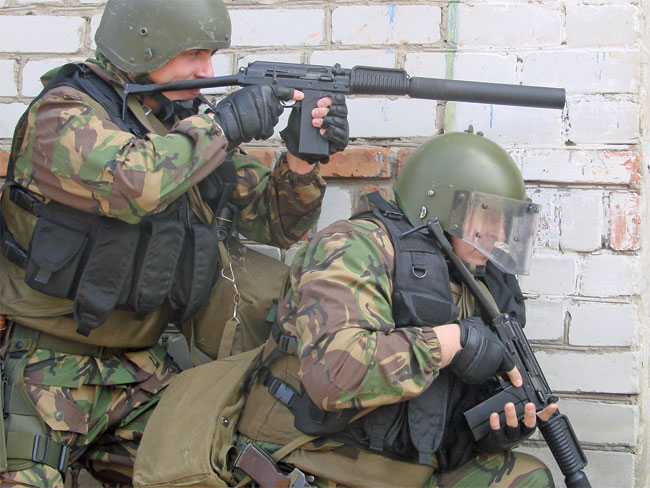 By the late 1980s, special operations elements of the Soviet Army, Internal Affairs Ministry and KGB were well equipped with silenced weapons which covered most bases and practical ranges.  However, the rise of organized crime and political disturbances in the USSR during the late 1980s increased demand for other types of weapons, previously overlooked by Soviet “Force Departments.”  In 1989, the 9th Department of the KGB, which was responsible for VIP protection, issued a request for a compact, easily concealable automatic weapon which would be significantly more powerful than the old Stechkin APS machine pistol, the preferred weapon of many Soviet VIP security teams of the time.  The request was handed over to the Central Institute of Precision Machine Building (TsNII TochMash), a state-owned organization that was responsible for the development of most specialized small arms.

The feasibility study at TsNII TochMash began by converting a silenced 9×39 AS assault rifle.  The bulky integral suppressor was discarded and the ports in the barrel blocked by a compact steel jacket, pressed over the muzzle part of the barrel.  A new front sight was fitted and the weapon was tested as the MA – “Malogabaritnyj Avtomat Vikhr” (small-sized automatic rifle, code-name “Whirlwind”).  The test of the MA showed enough promise to warrant further development, which was commenced under the factory designation RG051.  The main goal was to make the new weapon as compact and concealable as possible.  To achieve this, the rigid side-folding shoulder stock was replaced by a somewhat less comfortable but less space-consuming top-folding stock, and the fixed charging handle, which protruded from the right side of the gun, was replaced by dual sliders located above the fore end.  To achieve faster transition from carry to combat mode, the safety lever was redesigned to provide easier handling, and was made ambidextrous.  The top-folding stock was fitted with a powerful spring that automatically opened it into the ‘ready’ position once the user hit the lock button.  The latter feature didn’t survive for long, however, as during one of the early demonstrations to senior KGB executives, one unlucky officer hit the lock button without knowing its effect, and got hit in the face with the automatically unfolding buttstock.

The first pre-production RG-051 weapons were delivered to the KGB in 1991, and after extensive field testing in 1996 the new weapon was designated SR-3 and adopted by the KGB’s successors, the FSB (Federal Security Service) and FSO (Federal VIP Protection Service).  The weapon was manufactured by the same TsNII TochMash organization and on the same machinery that was (and still is) used to manufacture the suppressed AS and VSS weapons.  Like many other TsNII TochMash products, the SR-3 was a ‘niche’ weapon.  It was mostly intended for VIP protection, although some elite counter-terror units in Russia also got hold of these compact but powerful guns, which are well suited for CQB scenarios when opponents could be wearing body armor or hiding behind hard barriers.  Despite the lack of the sound suppressor it was an excellent weapon for many police duties, but it was too expensive and too optimized for concealed carry.  A demand arose for a weapon with similar capabilities, firing similar 9×39 ammo, but of more affordable cost and with better tactical flexibility.  The famous Instrument Design Bureau (KB Priborostroenija or KBP in short) decided to fill this niche.

OMON (SWAT-type unit) operators practice with their 9-A91 rifles at the range. Note that officer at the front has the new production suppressed weapon, while other officers are armed with old production, unsuppressed guns with spoon-type muzzle compensators.

The goal of the new development, which was carried out with the company’s own funds, was to create a new CQB weapon for police use that would be lighter than the ubiquitous Kalashnikov 5.45mm AKS-74U compact assault rifle, while offering better stopping power and barrier penetration.  Additionally, the new weapon had to be relatively inexpensive to make and maintain.  These desired targets were achieved by selecting the 9×39 subsonic AP ammo as the core of the new system, which was designated 9-A91.  Other goals were achieved by designing a new weapon from scratch, using standard manufacturing techniques and dispensing with the Kalashnikov heritage.

The new weapon was also gas operated and utilized a more or less conventional rotary locking bolt, but it was almost a kilogram lighter than AKS-74U without the magazine.  Extensive use of steel stamping and forming technologies helped to keep the cost down, and the first batches of the 9-A91 weapons were delivered to the MVD users in 1994.  Since the original 9×39 SP-6 AP ammunition was quite expensive, KBP also took the time and effort to design a less expensive alternative, the PAB-9 AP cartridge in the same caliber.  It also used a steel core but this was made by stamping rather than machining, and other cost-saving measures were introduced in the bullet manufacture.  As a result, this cartridge worked well in the 9-A91, but caused excessive wear to the barrels of the AS, SR-3 and especially VSS weapons in the same caliber.  For this reason, production of the PAB-9 ammunition, which was manufactured at the Tula Cartridge works, ceased by the late 1990s.

Following initial field testing of the 9-A91, KBP responded to user requests by improving the weapon.  The primary changes, introduced in 1995, included a quick-detachable suppressor and a side-rail for mounting optical sights.  Since the rail occupied most of the left receiver wall, the safety/fire selector lever was moved to the right side of the gun. 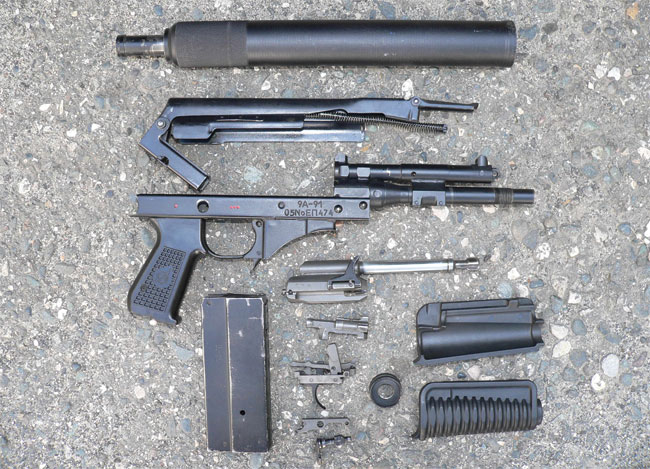 9-A91 rifle disassembled into main components.

In view of the initial success of the 9-A91, KBP decided to build a family of weapons using the same basic design.  One approach they tried was to convert the 9-A91 to fire pistol-caliber ammunition, such as the 7.62×25, but only one or two prototypes were built.  Another approach was to try and develop a more economical alternative for the VSS silenced sniper rifle, firing the 9×39 SP-5 sniper ball ammunition.  Work on this version commenced in 1994, and shortly afterwards a new weapon was offered to all law enforcement organizations across Russia.  Designated VSK-94, it was nothing more than the 9-A91 rifle, hand-picked at the factory for best accuracy, and fitted with a non-folding skeletonized shoulder stock and a PSO-1-1 4X telescopic sight, calibrated for 9×39 ammunition.  VSK-94s were also equipped with the same quick-detachable suppressors as the post-95 9-A91 rifles.  These sniper rifles also retained the selective-fire capability of their parent weapon.  Both the 9-A91 and the VSK-94 became quite popular among Russian law enforcement units, especially various OMON and SOBR SWAT-type teams that were engaged in fighting terrorism and organized crime.  Since 2004, the VSK-94 has also been officially adopted by the Russian Army to complement the somewhat more accurate, but also more expensive, VSS sniper rifles used by Army Spetsnaz and reconnaissance units.

During the early 2000s, TsNII TochMash decided to develop a similar weapon to the 9-A91 to extend its market presence.  The new SR-3M compact assault rifle, which is now in limited use by various FSB and police Spetsnaz units across Russia, is a mix of the original features of the AS and SR-3 weapons.  Basically, it’s the AS rifle fitted with a non-ported barrel, a new fore end with an integral folding fore grip, and the new quick-detachable suppressor, so it can be fired in both suppressed or standard configurations depending on the mission profile.  Also, in response to end user requests, TsNII TochMash developed a new 30-round magazine to complement the older 10- and 20-round magazines, manufactured for the AS, VSS and SR-3.

According to end user reports, both the SR-3M and 9-A91 weapons are excellent CQB tools.  Both have the traditional high reliability of Russian military small arms and provide significant stopping power and hard barrier penetration at ranges of up to 100-150 meters (the SP-6 AP bullet can go through 6mm of mild steel at 100 meters range).  Both can be used with suppressors as required, and both are often fitted with low-magnification telescopic or red-dot sights.  The VSK-94 is also popular for short-range precision work, although its accuracy is certainly not up to the demanding standards of Western police snipers.  With SP-5 ball ammo it can deliver 2-4 MOA accuracy at ranges of up to 300-400 meters, which is usually enough for its intended role.  For more accurate work, police units are usually equipped with more traditional sniper rifles firing more powerful 7.62x54R ammunition, such as SVD or SV-98.

Tags: 2011, 9A-91, Federal Security Service, FSB, Maxim Popenker, SR-3, SR-3M, V3N2, Volume 3, VSK-94
← Elites of the Exercito Brasiliero
IndoDefence 2010 →
Distributed at trade shows worldwide, Small Arms Defense Journal is a bimonthly publication that focuses on small arms, accessories, gear for the soldier, new products, industry news, and defense trade shows. The first issue of SADJ was Spring 2009, which launched at the LAAD show in Rio de Janeiro, Brazil. SADJ (pronounced “sage”) is targeted toward military, law enforcement, and defense industry professionals. Our job is to reach these groups and tailor content to their interests while producing a publication that is applicable to an international audience.